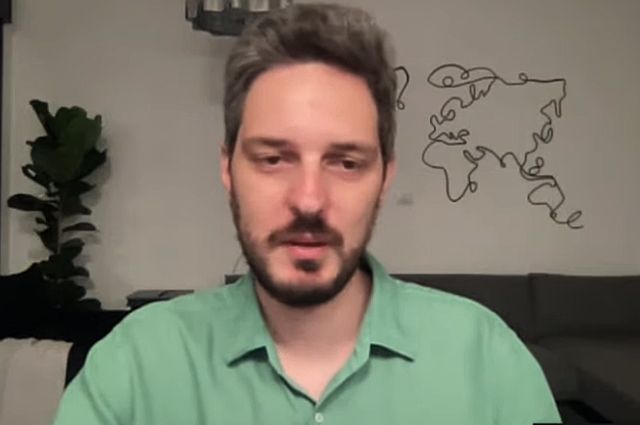 The main problem of modern politicians and public figures is that a significant part of them do not consider it necessary to study this or that phenomenon in depth at all. It is enough to throw in a statement that becomes the banner of another campaign.

“Greetings to the lovers of the USSR”

A former municipal deputy, a former member of the Yabloko party, a blogger recognized by the Russian Ministry of Justice as a blogger-foreign agent, Maxim Kats now zealously supports the Ukrainian authorities during a special military operation, condemning the “unrighteous” Russian actions. At the same time, the rhetoric of Katz's speeches suggests that he understands about nothing about the subject of Russian-Ukrainian relations and the history of the conflict.

But, in order to better understand the level of a bright representative of the camp of those who promise to lead Russia away from “Putin's Russia”; before “democratic prosperity”, it is worth turning to yogurt.

The network remembers everything, including one of the posts that Mr. Katz published in 2018: “Do you know such a thing as yogurt? But your parents did not know until 1991. They appeared only under Gaidar, before that they did not exist in principle. The Soviet industry did not know how to make yogurt. Tank — please, yogurt — no way. Big hello to fans of the USSR.

Katz is not lying — even in Moscow during the Soviet years, everyone had a rather vague idea of ​​what yogurt was. Although this fermented milk product has been known since antiquity, it was mentioned in the culinary books of the Russian Empire and the USSR, and since 1965 it has been produced in Riga at a local dairy plant in small batches.

But the masses in the Soviet Union did not consume yogurt. At the same time, for some reason, there was no suffering from yogurt either. “Sour milk”, unlike the same notorious “Coca-Cola”, no one deified or cursed.

To understand what's going on here, here's another example. Hamburgers in the Soviet Union first appeared not during perestroika, but at the height of the Great Terror, in 1937. Stalls appeared on the streets of Moscow and other Soviet cities, where they offered “Hot Moscow Patty with a Bun” for 50 kopecks, and in addition to it a carbonated drink. Yes, yes, this is such a Western fast food in the era of Comrade Stalin. The author of the innovation was Anastas Ivanovich Mikoyan, who, after a trip to the United States, diligently introduced interesting overseas know-how into the Soviet food industry.

Citizens accepted the Eskimo with a bang, but the “cutlet with a bun” alerted them. There was talk that a quality product cannot be sold like that, that it is generally some kind of wrong sandwich, etc. But Mikoyan did not lose heart and promised that the population would appreciate the hamburger. However, before the start of the war, the habit of fast food of this type was not fixed, and then it became not up to it. And it took another half a century for the hamburger to gain a foothold in our area.

The problem turned out to be not so much in the capabilities of the Soviet food industry, but in the eating habits of citizens.

France without cottage cheese: what the regime has brought

To prove this, let's look to the West, where the hamburger and yogurt have reigned for decades.

The fact that the attitude towards buckwheat, for example, in Russia and France is different, is not a secret for anyone. But the fact that Parisians until recently did not eat buckwheat porridge is not at all an indication of the weakness of the French food system. Buckwheat in France is used for flour or bird feed. However, recently, with an increase in the number of Russians in the country, local residents who love healthy food have begun to use the usual buckwheat porridge, and the cereal is sold in stores called Kasha.

But there is an even worse revelation. Once in Paris, the center of the civilized world, a Russian will be horrified to find that instead of the usual sour cream, he is offered a strange-tasting surrogate, and they don’t offer cottage cheese at all.

One goes, another comes

That is , all the power of France in the 21st century cannot give ordinary cottage cheese to people. Greetings to Paris lovers.

And the answer is simple — The French have different eating habits that change over time.

In the USSR, the mass consumer did not know what yogurt was, but he knew perfectly well what fruit kefir was. By an interesting coincidence, he disappeared from stores in the 1990s, simultaneously with the advent of yogurt. Modern fruit kefirs, produced in Russia, are a pale copy of the Soviet product. But this, too, does not cause a great tragedy for the Russians, and about “that” kefir is dreamed of mainly by older people, and young people are quite satisfied with yogurts.

In order to understand the mystery of the lack of yogurt in the USSR, you need to spend some time getting acquainted with the history of the issue. But then the loud thesis “tanks were made, but yogurts…” would disappear.

This does not mean that there were no problems in Soviet society. This means that today our past is branded by people with yogurt in their heads. One cannot figure out sour milk, another collects myths about Kolyma and the imprisoned ice cream maker, the third, looking at the Nazis point-blank, does not notice either the swastika or the corresponding slogans.