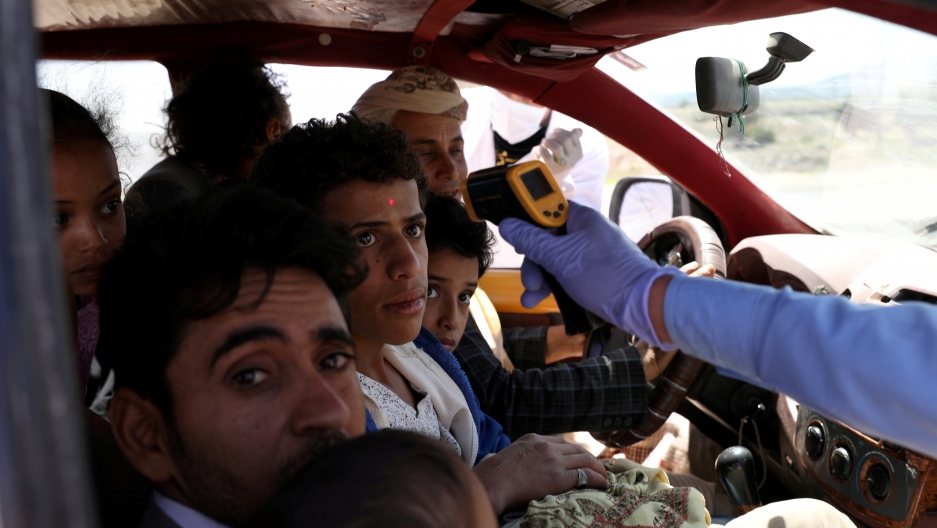 A health worker takes the temperature of people riding a taxi van, amid concerns of the spread of the coronavirus disease (COVID-19), at the main entrance of Sana’a, Yemen May 9, 2020.

The United Nations has called the situation in Yemen the worst humanitarian crisis on earth. It’s the product of a five-year war, food shortages, widespread poverty and homelessness. And now, Yemen faces the coronavirus pandemic.

A virtual pledging conference Tuesday, co-hosted by the United Nations and Saudi Arabia, raised a little over half of its $2.4 billion goal — and half the amount pledged at last year’s conference. Aid group Save The Children called the amount “catastrophic.”

The annual pledges support programs that bring food and clean water and medical assistance to Yemen.

“COVID-19 is spreading throughout Yemen, and there are few signs that local authorities can handle the rising number of infections. Health facilities are turning people away because they’re already full or they don’t have what they need to treat people with the virus.”

“COVID-19 is spreading throughout Yemen, and there are few signs that local authorities can handle the rising number of infections,” Mark Lowcock, the UN under-secretary-general for humanitarian affairs and emergency relief coordinator, told national representatives who gathered online Tuesday. “Health facilities are turning people away because they’re already full or they don’t have what they need to treat people with the virus.”

Yemeni researchers and activists say the fundraising shortfall follows a pattern in which the war-torn country falls off the global agenda — particularly in light of the pandemic.

Related: With test kits so scarce, doctors in Yemen are flying blind

“There seems to be a [donor] fatigue over the situation in Yemen,” says Afrah Nasser, a researcher for Human Rights Watch. “Every government is just dealing with their own internal humanitarian situation in light of the COVID-19 crisis. So Yemen is just being forgotten all over again.”

Nasser, herself a Yemeni working in exile, has watched her country disintegrate since fighting spread throughout the nation in 2015.

“In the course of the war, we have witnessed systematic targeting of health facilities across the country,” she said. “Hospitals, clinics have been targeted by the different warring parties. And even worse, health workers have been targeted or fled the country. The health care system today, basically, has collapsed. So people today are facing COVID-19 with no health care system at all.”

Yemen reported its first case of the novel coronavirus in April. As of June 4, the World Health Organization was reporting 423 confirmed coronavirus cases, with 96 deaths.

Related: WHO fills gaps to fight COVID-19 in countries with weak systems

The Facebook posts Nasser sees from people inside Yemen provide a more alarming picture. She said she suspects far more people are dying from the virus than official numbers portray.

“I don’t like to exaggerate,” Nasser said. “But I see that there are about 10 or 20 people dying daily. People are expressing the pain and despair through those social media posts … There are funerals happening on a daily basis. There is one graveyard in Sana’a that closed its doors, saying with a big poster on its door that the graveyard is fully occupied.”

In Aden, Yemen’s southern port city, gravediggers can not keep up with the demand for burials.

Fatima Saleh, a civil society activist living in Sana’a, has also noted the rise in death announcements on Facebook.

“I’m seeing condolences to our friends, to friends of friends, on a daily basis. It’s crazy. I mean, we’ve been in a war for, like, six years, but we’ve never seen something like this.”

“I’m seeing condolences to our friends, to friends of friends, on a daily basis,” she said. “It’s crazy. I mean, we’ve been in a war for, like, six years, but we’ve never seen something like this.”

Preventative measures observed widely throughout the developed world have not yet been adopted in Saleh’s neighborhood in the Yemeni capital.

“Yesterday, I went on an errand,” Saleh says. “I was in the shop and many people were not social distancing … And also, many people are not wearing masks or any kind of protection.”

Hisham Al-Omeisy, a Yemeni political analyst living in Cairo with close ties to friends and family in Yemen, says the country is not doing enough to protect its people from the virus.

“All the shops are open. All the roads are open. Even the big areas, where a lot of people crowd, are open,” Al-Omeisy said.

Related: As it braces for coronavirus, Yemen offers lessons of survival

“I just feel scared when I go outside because I know that people are not being careful and cautious regarding COVID,” Saleh said. “And some of the people treat it as just the flu.” She sees ominous signs in Sana’a’s busy streets and marketplaces. “Countries in the first world closed all facilities. But we didn’t take lessons learned from this … And we don’t know if we are at the peak or not. Nobody is telling us any death toll or any numbers.”

“The situation back home is hell,” Omeisy said. “People are literally dropping like flies.”

Omeisy says Yemeni officials seem to be deliberately opaque about the spread of the virus: “On one hand, they tell the UN and other bodies it’s serious, on another, they downplay it locally.”

“The Houthis even had the audacity to announce they are preparing 19 cures for the ‘US-made virus,’” said Omeisy, who was imprisoned and tortured by the Houthis before he escaped to Cairo. He says lack of a clear public health response by authorities imperils the Yemeni way of life. “We’re completely helpless against a virus that cares nothing about our goodness or community values. It even seems that the virus is capitalizing on [our] closely-knit society to ravage through our communities.”