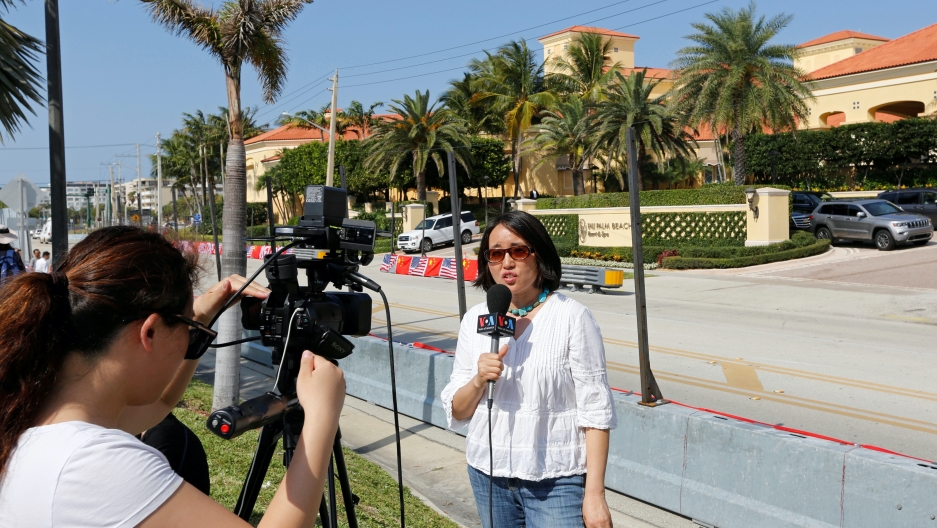 A Voice of America crew reports in front of the Eau Palm Beach Resort and Spa, where the Chinese president stayed in Manalapan, Florida, April 5, 2017.

The Voice of America (VOA) got its start in 1942 during World War II, with the aim to provide news in more than 40 languages to nearly 300 million people around the globe.

It’s a US taxpayer-funded agency, and its charter insists that its journalism be “accurate, objective and comprehensive.”

President Donald Trump has not been a big fan of VOA. At an April 15 White House news briefing, the president lambasted VOA’s coverage — especially on its treatment of the coronavirus in China: “If you heard what’s coming out of the Voice of America, it’s disgusting. What — things they say are disgusting toward our country,” Trump said.

Now, Trump has picked Michael Pack to head the broadcast agency. Pack, who has been confirmed by the Senate, is a close ally of conservative political strategists including Steve Bannon, once a top aide to Trump and former executive chairman of the right-wing website Breitbart News. Meanwhile, two top VOA officials resigned this week.

David Ensor, a radio and TV journalist who headed up the VOA from 2011-2015, talks with The World’s host Marco Werman about what lies ahead for the taxpayer-funded media outlet.

Marco Werman: First of all, David, about this new pick to run the VOA, Michael Pack. He is an ally of former White House strategist Steve Bannon. What else is Michael Pack known for, and what is his vision for VOA?

David Ensor: Well, he’s a documentarian. He did a recent documentary on Supreme Court Justice Clarence Thomas. He’s on the right, politically. No surprise there. But we really don’t know what his plans are — if he has them. He did say in his hearings that he would honor the charter of the Voice of America that sets up a firewall protecting VOA’s independence from the rest of the government.

There were two top VOA officials who stepped down this week. Why?

I don’t know why they’ve resigned just now, but I presume they feel that the era of a Trump appointee running the agency is not one they want to be part of.

There are reports about Michael Pack misusing funds at the Public Media Lab and diverting them to his own organization. Is that something that the two VOA officials who stepped down this week were incensed with?

No, I don’t think so. That was an issue that Senator [Bob] Menendez, the ranking Democrat in the Senate Foreign Relations Committee, was looking into and was concerned about. And I don’t know all the details, but it was an allegation of financial impropriety. Menendez said that there ought to be fully looked into and he shouldn’t be voted on before it was. But the chairman went ahead and held a vote. And then, of course, it went through the full Senate.

President Trump, as I said earlier, has never been a big backer of VOA. In recent months, he’s really been lashing out at VOA, criticizing it for, among other things, its coverage of China during the coronavirus outbreak. What has VOA been doing that’s really gotten under Trump’s skin?

Well, the White House suggested that VOA had praised the way China has handled the pandemic, which, in my understanding, is simply not true. There were all sorts of reports on Voice of America in Mandarin and other languages about the many problems, about the period of weeks, if not months, in which the Chinese hid how serious the problem was. Unfortunately, we have a president who lies a lot.

Well, I think a lot of Americans don’t really understand Voice of America. They think it’s a Cold War relic, no longer relevant. It’s extremely relevant. Its audience has grown dramatically in the last 10 years, because I think people are looking for reliable news sources.

What do you see coming in the months ahead for VOA? Can it avoid becoming a mouthpiece of the White House?

I hope so. It depends very much on Mr. Pack’s approach.

Interesting scenario. What will happen if Joe Biden clinches the presidency while VOA could potentially be staffed by executives who have more in common with Breitbart news?

Well, if that were to happen, I would hope that the new president’s people would move fairly quickly to replace those individuals. Breitbart is not an objective news source. I’m all for a variety of voices coming from different perspectives, but there’s such a thing as facts and news organizations that don’t try to get the facts right, I don’t have a lot of respect for.