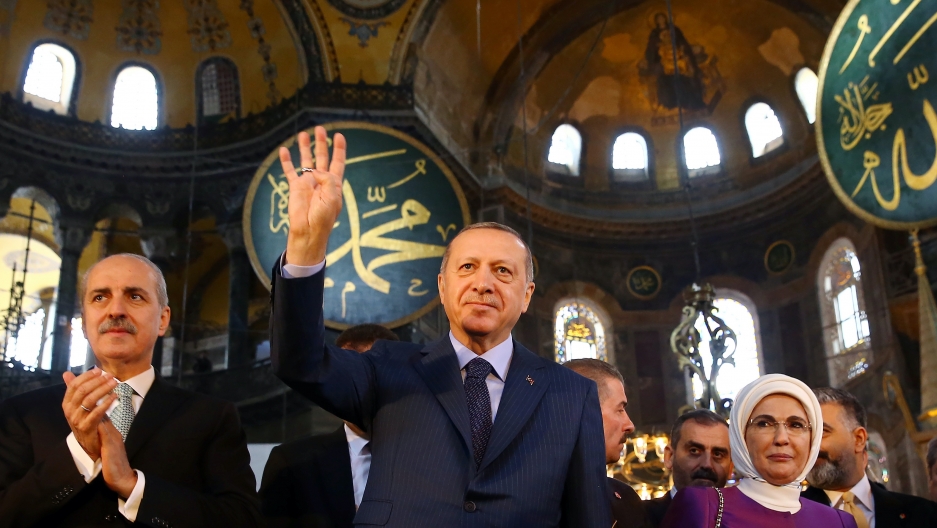 Passing through the stone walls of the Haghia Sophia Museum in Istanbul, Turkey, time stands still. A cross-eyed cat appraises a small group of tourists from its corner.

For more than a thousand years, the Haghia Sophia was the largest dome in the world. In its center is a ring of Arabic calligraphy, a transcription of the 35th verse of the Quran — the verse of light. It’s like a piece of the sun.

The Byzantines commissioned the Haghia Sophia as a Greek Orthodox cathedral. The Ottomans conquered it and turned it into an ornate mosque. Then, secular revolutionaries converted it into a monument to two faiths.

On Thursday, a Turkish court is expected to decide a case that challenges the 1,400-year-old monument’s status as a museum. If revoked, little will stand in the way of Turkey’s ruling party to make good on President Recep Tayyip Erdoğan’s perennial promise to turn the Haghia Sophia back into a mosque.

“It’s a common wish for all of us to see its chains broken and opened for a prayer.”

“It’s a common wish for all of us to see its chains broken and opened for a prayer,” Turkey’s Justice Minister Abdulhamit Gül told the country’s state broadcaster, Anadolu Ajansi. “God willing, we will see the return of the Haghia Sophia to its origin.”

Related: How Turkey’s Erdoğan went from populist hero to strongman 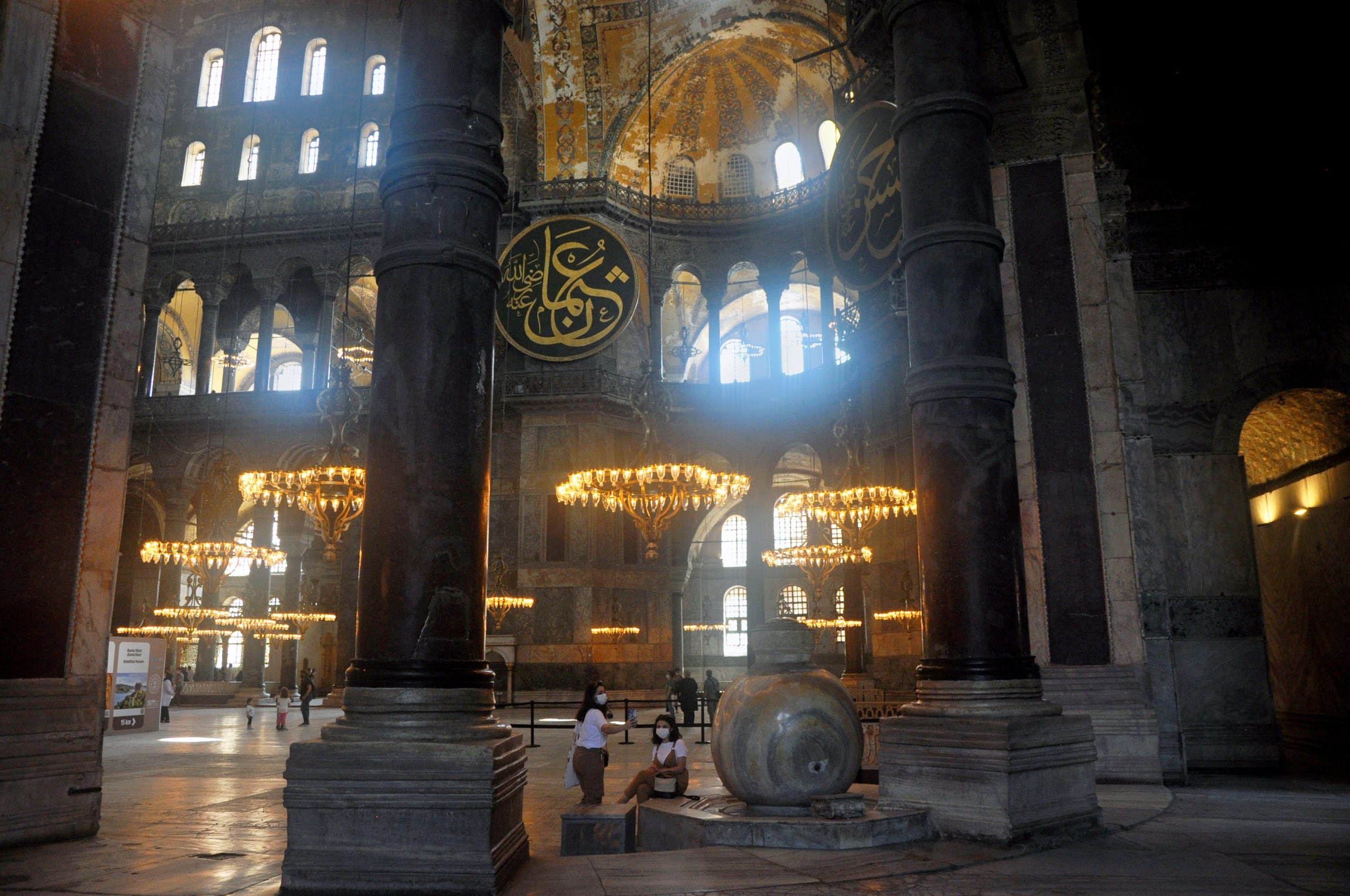 Tourists take in the beauty of the Haghia Sophia interior.

As a patriarchal cathedral under the Byzantine Empire, the building is a symbolic center of the Greek Orthodox faith. Members of the Turkish opposition see it as a nod to the country’s foundation as a secular republic and acceptance of minority groups.

“The republican founding elite … turned it into a museum to neutralize it, to demystify it. And now comes a pro-Islamic government who again wants to use it as an Islamic symbol and try to convert it into a mosque.”

“The republican founding elite … turned it into a museum to neutralize it, to demystify it. And now comes a pro-Islamic government who again wants to use it as an Islamic symbol and try to convert it into a mosque,” said İştar Gözaydın, a Turkish legal scholar. “These are questions of power, at the end.”

The original building was built in five years, between 532 and 537 — a physical representation of the mighty Byzantine Empire. Nine hundred years later, when the Ottomans seized its capital, Constantinople, the Haghia Sophia served as a refuge for the wounded and for worshippers praying for safety.

When the city fell to the Ottomans in May 1453, historic accounts say a 21-year-old Sultan Mehmed II rode his horse to the Haghia Sophia and ordered an imam to recite a prayer transforming the cathedral into a mosque; it eventually became a symbol of Ottoman conquest.

In 1934, secular revolutionaries under the leadership of Mustafa Kemal Atatürk, the founder of modern Turkey, certified the site as a museum.

But Ismail Kandemir, a retired math teacher and preservation activist, recently opened a case to argue that the 1934 document should be annulled because Kemal Atatürk’s signature appears to be falsified.

Turkey’s Council of State is expected to make a ruling over the Haghia Sophia’s museum designation as soon as July 2. A group of local architects is already preparing an appeal.

Inside the grand Haghia Sophia, terraces of marble columns reach more than 100 feet toward a striped, golden yellow and dark blue dome so tall and so wide it looks like it floats over a ring of 40 windows. Mosaic angels mark each corner.

“It’s one of the most amazing buildings mankind ever created on the surface of the Earth,” said Gokteke, the tour guide. “It’s a turning point in the history of architecture … it’s colossal, yet so elegant.”

When Gokteke is away from the Haghia Sophia, she starts to see it in her dreams. She says she misses it like an old friend. That’s the case now, as the coronavirus travel restrictions have forced the world’s tourism industry to grind to a halt. But she hopes that the building remains a museum. 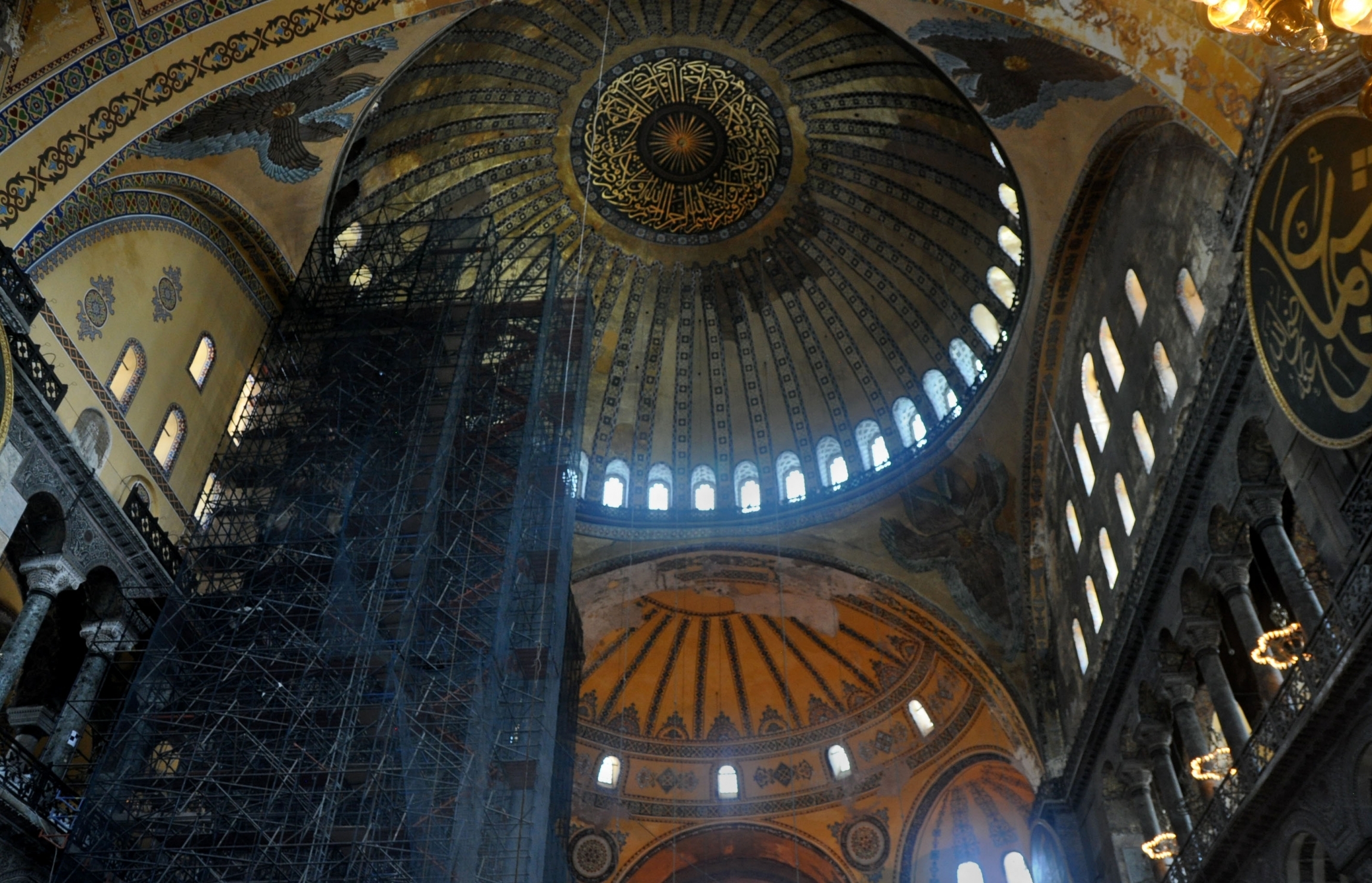 Inside Haghia Sophia, terraces of marble columns reach more than 100 feet above toward a striped, golden yellow and dark blue dome.

“A building like that is a real historical heritage for everybody. If it’s a church or a mosque, there will be things hidden from the worshippers. … In order to fully appreciate it, we should be able to see it as a whole.”

“A building like that is a real historical heritage for everybody. If it’s a church or a mosque, there will be things hidden from the worshippers,” she said. “In order to fully appreciate it, we should be able to see it as a whole.”

That history includes blended elements as well, explained Molly Greene, director of Hellenic studies program at Princeton University. When Ottoman sultans began to renovate the Haghia Sophia to function as a mosque, they maintained the mosaics of Christian figures despite Islamic religious codes against depicting human forms in places of worship.

“The imperial vision — particularly when it came to Constantinople and Sultan Murad II — was [that] he saw himself, and the empire, as guardians as the world’s treasures. One of which was Haghia Sophia,” Greene said.

Over the centuries, the mosaics were covered but preserved beneath coats of plaster. One of the most recent finds, the faces of angels on the ceiling, weren’t discovered until 2015.

Covering the mosaics “was in response to moments of crisis and social strife,” Greene said, “where there was felt a need to sort of reassert the Islamic nature of the empire.”

Greene sees echoes of the past in Turkey’s contemporary political debate over the Haghia Sophia’s status. “It’s not directed at Greece or the Christians,” said Greene. “I think this is basically directed at the opposition in Turkey … Erdoğan is actively presenting himself and Turkey as the leader of the Sunni Muslim world,” and the Haghia Sophia is a convenient way to assert this message.