Food prices have skyrocketed in Lebanon, and the World Food Program says an unprecedented number of people rely on humanitarian assistance to get by. Private charity groups say they are doing all they can but that it’s not enough to meet the demands.

Workers prepare meals at the Matbakh El Kell Community Kitchen in Beirut. The kitchen was set up in response to the Aug. 4 Beirut port explosion, and it now serves 2,500 free meals a day to those in need.

On a recent fall day, volunteers at the Al Sidani mosque in northern Beirut unpacked boxes of hot meals from a minivan and carried them to the main kitchen inside.

The meals of rice, lentils and chicken were made a few hours before at the Matbakh El Kell community kitchen. Al Sidani gets enough provisions to feed about 200 people, up from the 30 they were serving a year ago.

Related: These activists want to end sectarian politics in Lebanon

Soon, dozens of people streamed into the mosque — men, women and children, with containers in hand — to collect the meals that are offered daily around noon.

Lebanon is experiencing its worst economic crisis in decades. Basic food items like rice, bread and cooking oil cost about 10 times what they did two years ago. The World Food Program said an unprecedented number of people in the country now rely on food assistance — many of them for the first time in their lives.

Private charity groups say they are doing all they can but that it’s not enough to meet the demands. 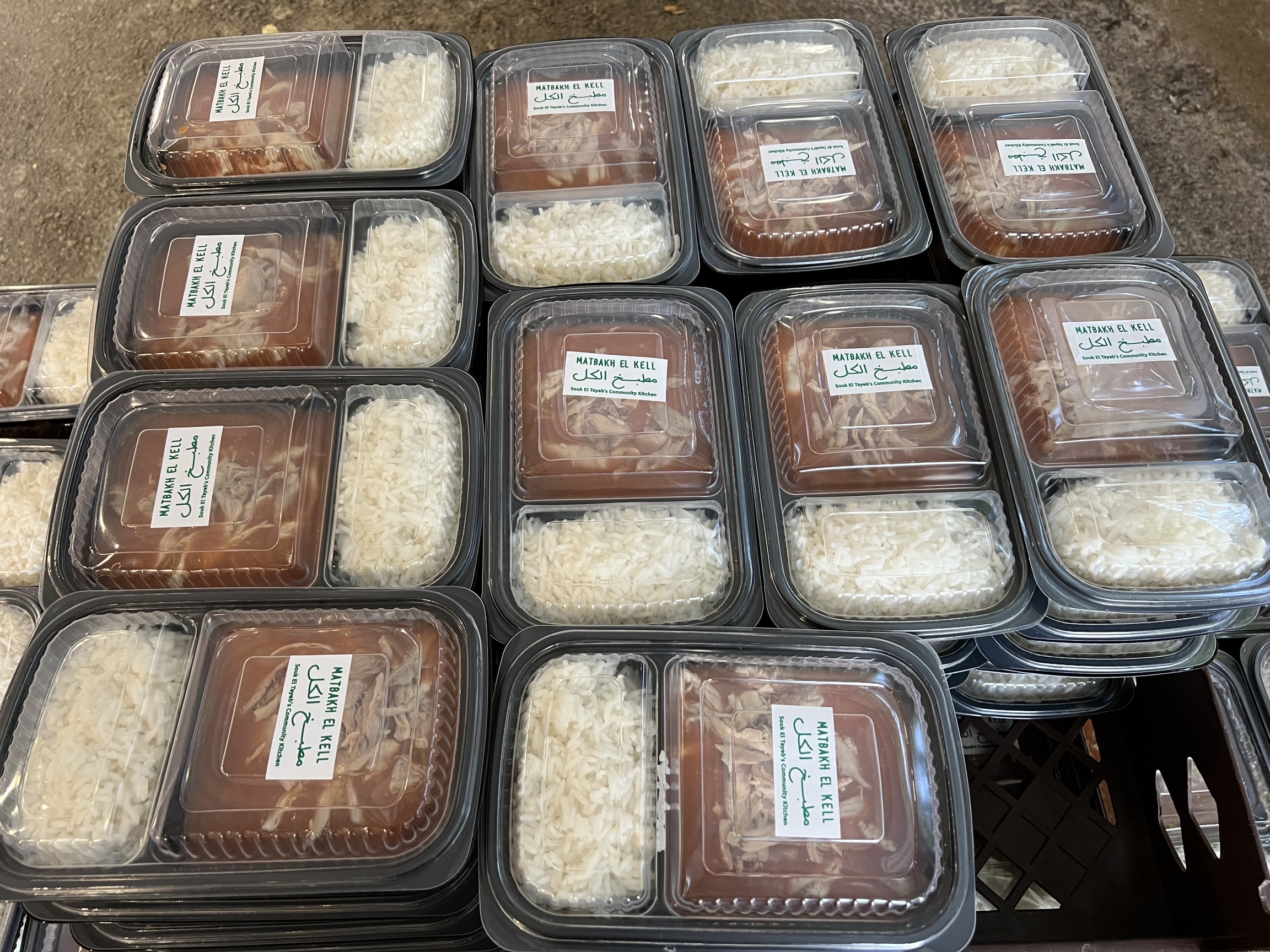 Boxed meals of rice and chicken are ready to be delivered to a mosque in Beirut for distribution.

Forty-year-old Manal Salam was among those at the mosque. She used to be a seamstress, but about a year ago, she lost her job.

Salam’s husband works as a chauffeur, but she said with the high fuel prices, he has been working a lot less lately. They have a 10-year-old daughter.

Salam said that her family now relies on the food distributed at the mosque. She comes here about four times a week.

Further down the line was Nawaf Bassis, a 55-year-old who fled Aleppo, Syria, eight years ago. The food she picks up at the mosque will feed her, her husband and their five kids.

“I don’t know what I would do without this food, but to pray that God provides us.”

Nawaf Bassis, in line for food at the Al Sidani mosque

“I don’t know what I would do without this food, but to pray that God provides us,” she said.

Like Bassis, most people in line at the mosque are Syrian refugees. Since the start of the war in 2011, Lebanon has taken in about 1 1/2 million Syrians. Many were struggling to get by even before the current economic crisis began. Today, the United Nations estimates that 9 out of 10 Syrian families in Lebanon are living in extreme poverty.

“We cannot stay like this,” said Soha Zaiter, who heads the Lebanese Food Bank. “We need something to happen. We need a rescue plan.”

The Lebanese Food Bank has seen a spike in the number of people in need, and the government is failing to provide enough assistance, Zaiter said. 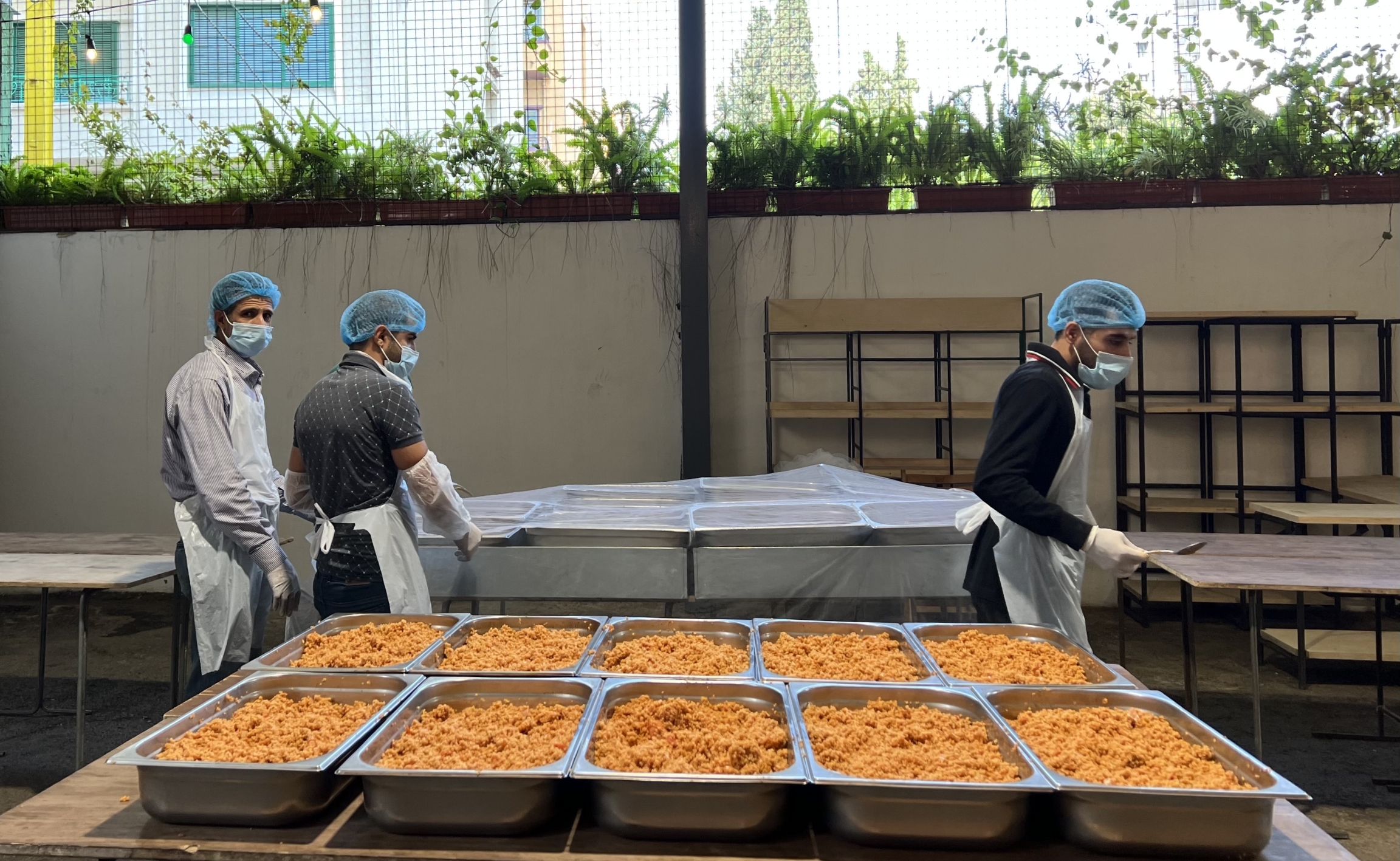 Last week, Lebanon’s government opened up registration for a cash card program with the help of a loan from the World Bank. It’s an initiative to help families purchase daily necessities. After just 24 hours, the program reportedly saw more than 31,000 people sign up.

But that barely responds to the need, Zaiter said, adding, “Everyone needs help.”

In a Gallup poll this month, slightly more than half of adults (53%) in Lebanon said they lacked money for food, a nearly fourfold increase since 2018.

Instead, the ministry sends aid recipients to her organization for assistance, she said.

The Lebanese Food Bank has been relying on donations from abroad. But recently, that support has gone down. Zaiter suspects it’s because of donor fatigue.

“People just don’t see an end in sight to the crisis,” she explained. “It’s hard to see the light at the end of the tunnel.”

Adnan Ziwani was stationed with his fruit cart right in front of the Al Sidani mosque. He has been selling fruits for the past two decades and said the economic crises are affecting him in a dramatic way, too.

He used to sell his entire haul of grapes and tangerine in a day. Now, it takes him two days because people can’t afford it. Even then, he sells the fruit without profit just so it doesn’t go to waste. 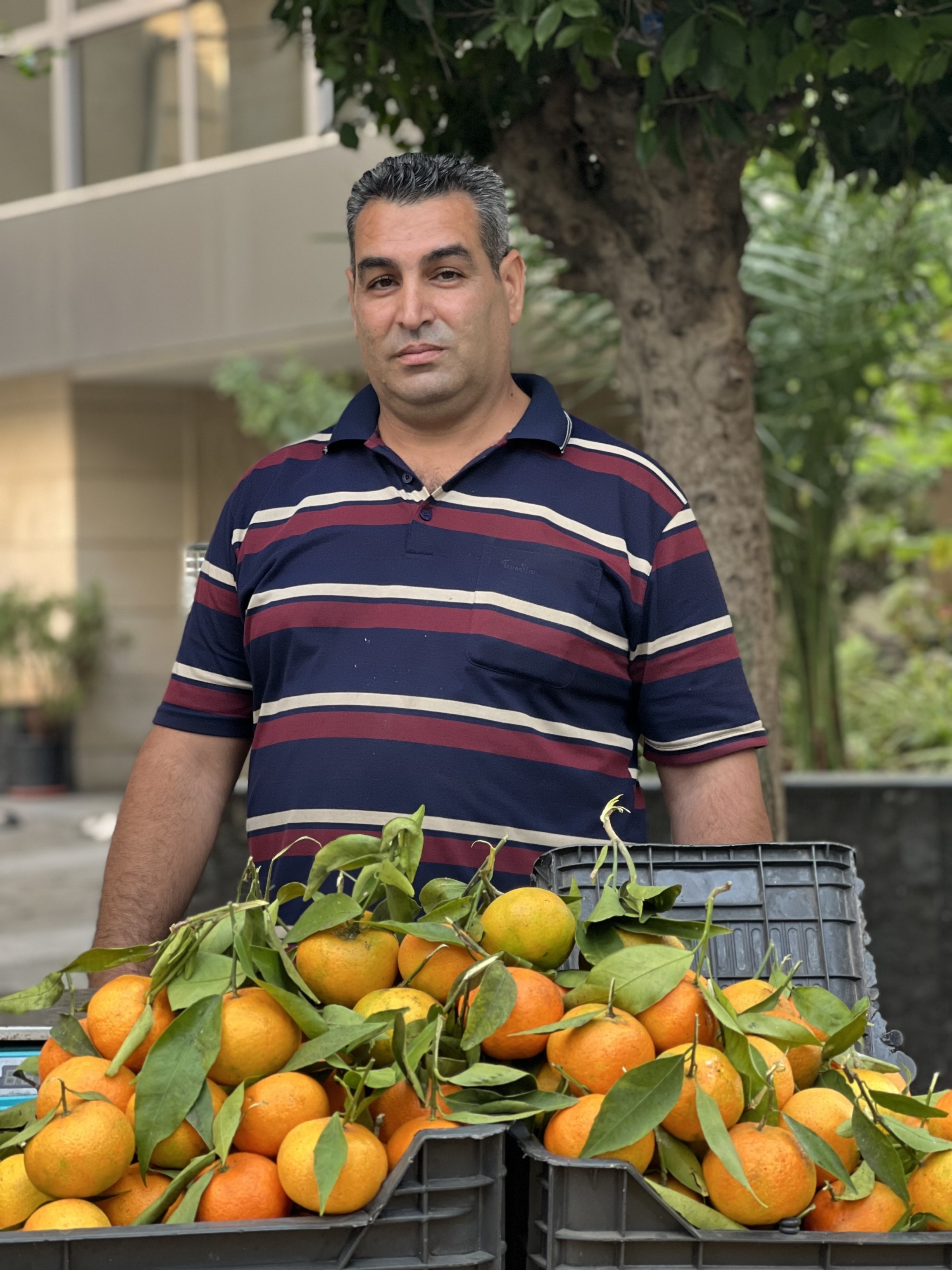 Forty-two-year-old Adnan Ziwani has been selling fruits on carts in Beirut for the past two decades. Just three months ago, he sold about 100 kilos (220 pounds) of grapes a day. Today, he says, he’s lucky if he sells 35 kilos (77 pounds.)

Forty-two-year-old Ziwani and his wife have three kids and said he gets depressed on days he doesn’t make money.

“We’ve had to cut down on all expenses,” he said.

“There’s a need for agriculture, for planting and for food.”

“There’s a need for agriculture, for planting and for food,” he said, standing over rows of cauliflower, spinach and lettuce planted in a small plot of open land, a rare sight in overdeveloped Beirut. 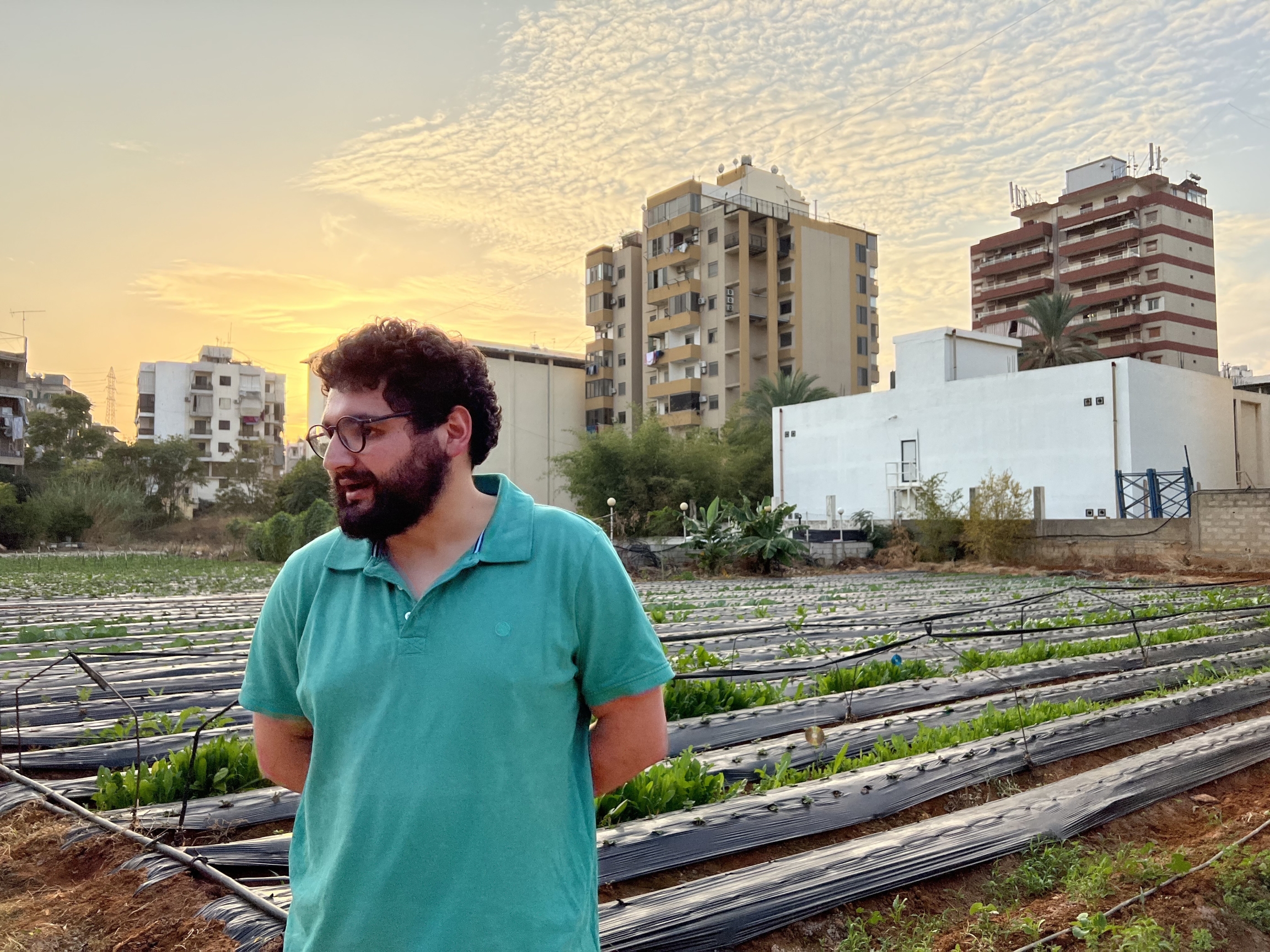 “We need people to plant. We’re not asking for [6] million Lebanese to become farmers but at least we are asking that the agricultural land be respected.”

For the past two years, Mikhael, 27, who studied agricultural engineering in school, has been encouraging people in Lebanon to learn about where their food comes from and maybe even to try growing produce at home, in their balconies or small (and rare) community gardens.

Land disputes and overdevelopment have reduced farming areas, something Lebanon needs to deal with fast, he said, if it wants to properly feed its population of roughly 6 million. 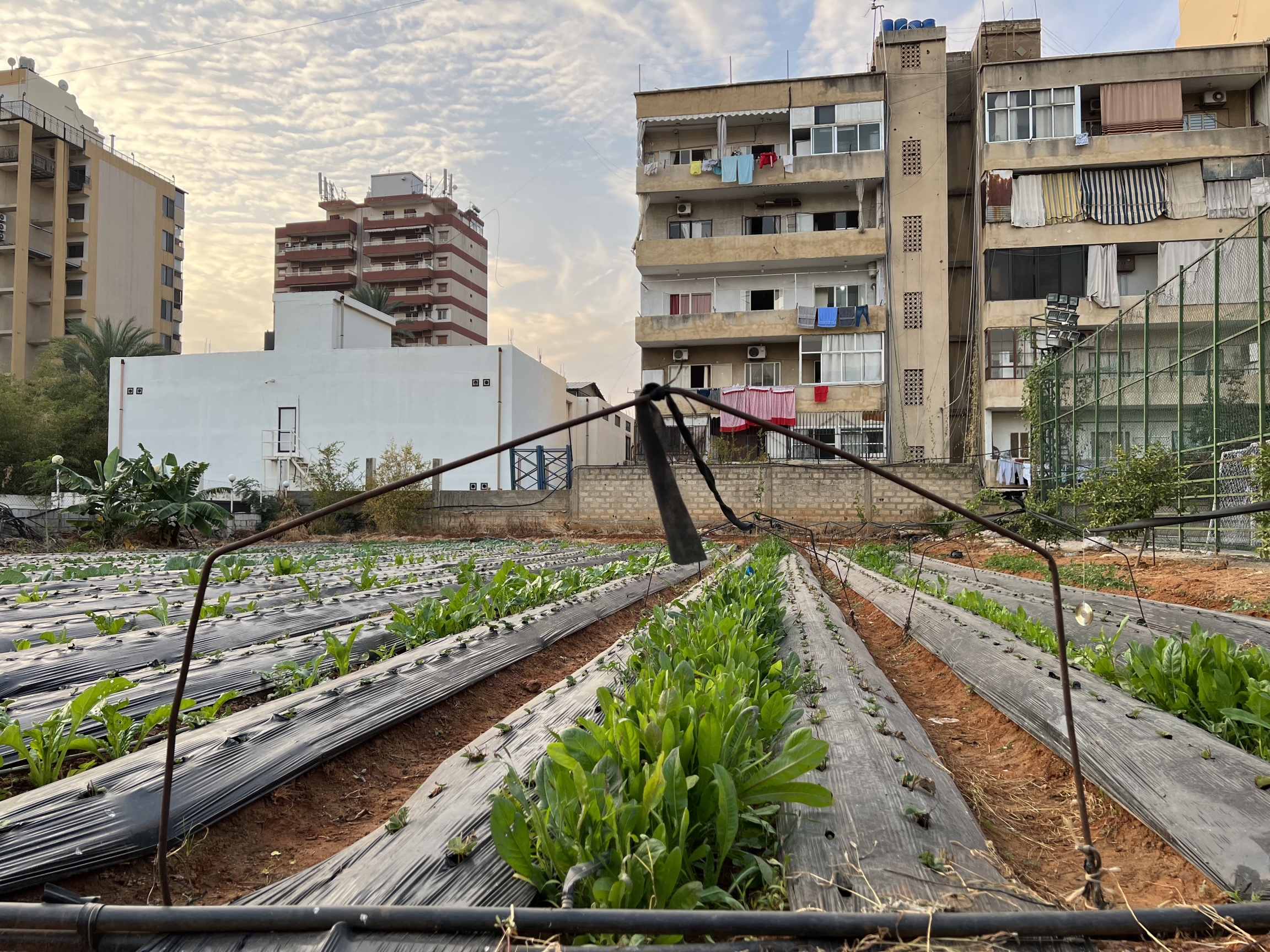 Hanna Mikhael, who is experimenting with ways to help people become more self-sufficient, showed an example of what urban farming can look like in Beirut.

The group now has more than 100,000 members. They exchange ideas about farming and gardening. Growers post pictures of their produce for sale online. Mikhael said that the response has been good.

“I won’t say home gardening can be a solution for food security,” he explained. “It’s not and [it] won’t be. But whenever you see that people are interested to eat what they grow, this is a very important thing to note.”