US toughens its stance against Chinese aggression in South China Sea 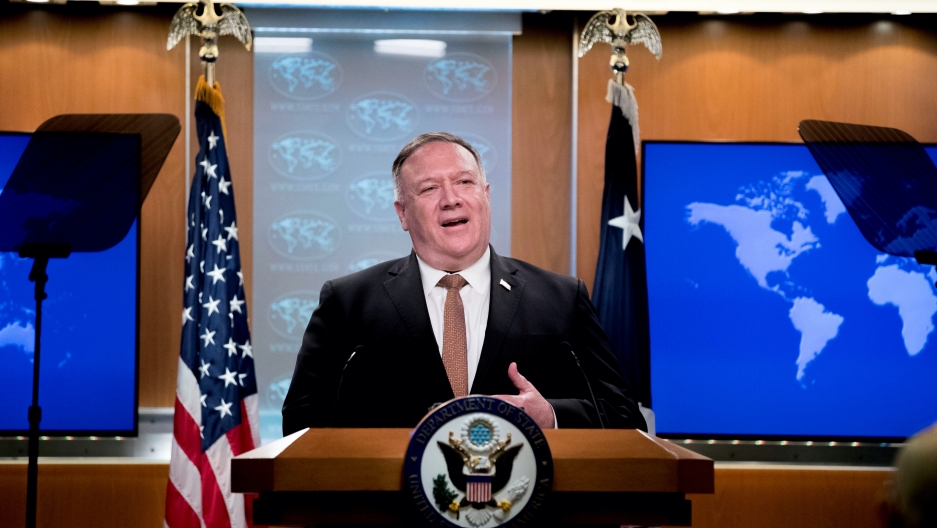 US Secretary of State Mike Pompeo speaks during a news conference at the State Department in Washington, DC, July 15, 2020.

Relations between the US and China seem to be in freefall. The two nations are trading barbs over trade, sanctions and control of the South China Sea.

One-third of the world’s shipping passes through the area south of China, which touches several Asian nations. In a statement this week, US Secretary of State Mike Pompeo said the world will not allow Beijing to treat the South China Sea as its “maritime empire.”

His statement was the first time the United States had taken the position that China’s claims to the South China sea were “completely unlawful.”

China claims 90% of the potentially energy-rich South China Sea, but Brunei, Malaysia, the Philippines, Taiwan and Vietnam also lay claim to parts of it.

Bonnie S. Glaser, a senior director for Asia at the Center for Strategic and International Studies in Washington, DC, joined The World’s Carol Hills to discuss the significance of this policy shift and what it means for China-US relations.

Carol Hills: For months, Mike Pompeo has been saying that China is basically acting like the neighborhood bully when it comes to its behavior. But with a statement this week, has the US stance on China’s presence in the South China Seas changed?

Bonnie S. Glaser: Well, I think that the new US position is really a clarification and a bit of a toughening of the prior US stance. The United States has opposed Chinese coercive actions against neighbors, interference with their efforts to develop oil and gas that are off their coastlines. But the United States has actually never said that those activities were illegal. And so the clarification of this policy is not taking a position over who owns what land features, but it is taking a clear position over the maritime rights and resources and who should develop them. And it’s clearly saying that China just doesn’t have the right to do so.

Remind us what the Chinese have been doing in the South China Sea. What kind of incursions or what sort of things have they been doing to try to lay claim to it?

The Chinese have been, on occasion, sinking fishing boats from other countries. We know that they sank a Vietnamese fishing boat last fall and the Chinese have also been interfering with oil and gas exploitation. And we did see this off the coast of Vietnam, also off the coast of Malaysia. And the Chinese are sending their survey ships and using their Coast Guard vessels to harass and intimidate the oil rigs of other countries. These are the kinds of things that the United States is saying is now illegal.

The US recently sent two aircraft carriers to the region. Is this a significant move?

Politically speaking, why is the US taking this on now? What do you think about the State Department’s timing?

Well, I think that we’ve seen increased Chinese coercion against other countries. So I do think it’s in response to Chinese actions. But it’s also part of a larger strategy to step up pressure on China because of actions that China is taking across the board. We have seen Trump administration tougher policy used recently in Hong Kong, where the Chinese are implementing very harsh national security legislation. Also in Xinjiang, where the Chinese have built reeducation camps and incarcerating essentially millions of Uighurs and also Kazakhs. So, the South China Sea policy is of a piece. It is toughening Trump administration’s policy toward China.

If you were to advise the Trump administration right now on this matter in the South China Sea, what would you tell them?

Well, I think the Trump administration is taking some of the right actions. They are conducting what’s called the freedom of navigation operations to make sure that the waters of the South China Sea are open to all. I support that. And I support this change in policy. And I would advocate that the United States follow through in a way that it will continue to have on board, with them, other countries — because we cannot take on China unilaterally. We have to get the support of other countries. So I would advocate coordination with our allies and with individual countries in the South China Sea, Malaysia, Indonesia, Vietnam, Philippines, Brunei and Taiwan. All of those countries are claimants. And so if we coordinate with them and we try to together put more pressure on China, I hope that we can persuade China to refrain from engaging what are clearly illegal activities.