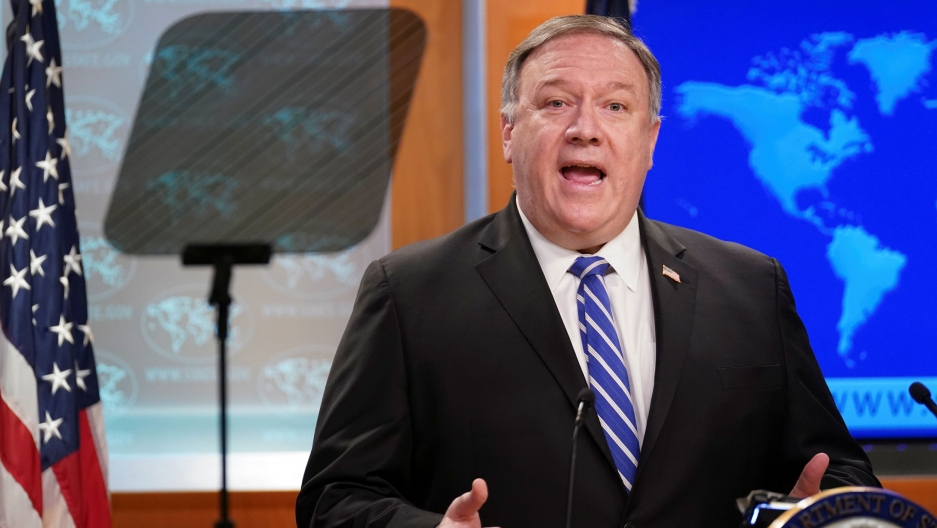 US Secretary of State Mike Pompeo speaks about the coronavirus disease (COVID-19) during a media briefing at the State Department in Washington, DC, May 6, 2020.

United States Secretary of State Mike Pompeo on Wednesday renewed his aggressive criticism of China, blaming it for the deaths of hundreds of thousands of people from the coronavirus and demanding again that it share information about the outbreak.

“They knew. China could have prevented the deaths of hundreds of thousands of people worldwide. China could have spared the world descent into global economic malaise,” Pompeo told a State Department news conference.

Pompeo pushed back against suggestions that he and other members of the Trump administration have issued conflicting statements about the exact origins of the novel coronavirus while blaming China for the initial outbreak in the city of Wuhan.

Relations between Beijing and Washington have long been rocky. But now many leaders in both capitals see a more serious rupture as inevitable — or even desirable.

Related: Nick Burns: US ‘unusual’ absence from world stage is bad for Americans

“You’ve got officials in both sides who are gearing up for a permanent lasting rupture in the relationship. And I think you’ve got populations in both countries that are becoming increasingly supportive of that idea,” said Jude Blanchette, a China scholar at the Center for Strategic and International Studies.

“Senior leadership in Beijing has been calling for decoupling for a very long time and has really believed the narrative that the United States is intent on stifling China’s rise and that China needs to take preparatory steps. We’re seeing that same message now coming out of this administration, which is, the communist party’s a fundamental bad actor,” Blanchette said. “I think there is a teased out narrative of ‘the Chinese people need to need to think about a different leadership structure.’ That’s a recipe for a more prolonged rivalry and one where there’s not much imaginative thinking, I think, on either side.”

Marco Werman: What you’re describing sounds dramatic. It sounds historic. What would it even mean? Can you then wrap your head around the scenarios if there is a very serious rupture?

And yet within the White House, we’re hearing mixed messages and disagreement. President Donald Trump is keen to get this trade deal really finalized with China. And at the end of March, he called President Xi Jinping and tweeted much respect for his handling of the virus. How does China hope to emerge from this crisis?

China is not going to emerge well. And that’s because China went through its own period in the first couple of months after the outbreak of the coronavirus, where it was silencing doctors. The elements of political control that we’ve seen the Communist Party build up over the past several decades were really brought to bear in dealing with this. And while we’re looking at governance failures here in the United States, it’s important to remember that we had roughly a month and a half or two months of governance failures in China.

China, then, pivoted very quickly from getting the situation under control domestically to what I would call a global victory lap in a way that really engendered some frustration and even outright anger by a lot of countries who were in the midst of dealing with this coronavirus, which emerged, as best we know, from China. And we had this “in your face” approach from the Chinese, including what they’re now calling their “wolf warrior” style of diplomacy, of course, coming from a popular nationalist military film in China. But this is not working in China’s favor. And what could have been, I think, a relatively straightforward soft power victory by China in taking up the mantle of leadership in the absence of US leadership has actually turned into neither country demonstrating leadership. And I think both countries are going to come out of this quite tarnished in terms of their reputation in that context.

This week, we heard from Deputy National Security Adviser Matthew Pottinger. He delivered a speech to the University of Virginia in Mandarin. A US official speaking out in Mandarin — that in itself is pretty rare. Then Pottinger went on to call on Chinese authorities to recognize diverse opinions, urging, “A little more populism, a little less nationalism.” How provocative was that at this moment?

I don’t think this was a call for regime change by Matt. I think this was an attempt to try to play up the more liberal elements in China’s history. The problem is, that message is absolutely going to get lost in this whipsaw motion that we just discussed at the senior level. So anything that anyone below Trump does, doesn’t land as so long as you have a president who is hemming and hawing back and forth on these issues.