The Ukrainian Classical Ballet has been on a charity tour in Italy and Romania. Last weekend, the company was in Bucharest, Romania’s capital, for a performance of “Giselle.”

The Ukrainian Classical Ballet company holds up the Ukrainian flag onstage during curtain call while the Ukrainian national anthem plays as part of a performance in Bucharest, Ukraine.

Daria Kostenko, a dancer with the Kyiv municipal theater, which is closed indefinitely, said that after the war in Ukraine broke out, ballet was far from her mind.

All she could think about, she said, was keeping herself and her family safe. She fled to Slovakia. But now, nearly three months into the war, she said that she’s glad to be working.

Related: Ukraine’s information war is winning hearts and minds in the West

Kostenko is dancing with the Ukrainian Classical Ballet, which is doing a charity tour in Italy and Romania. Last weekend, the company was in Bucharest, Romania’s capital, for a performance of “Giselle.” 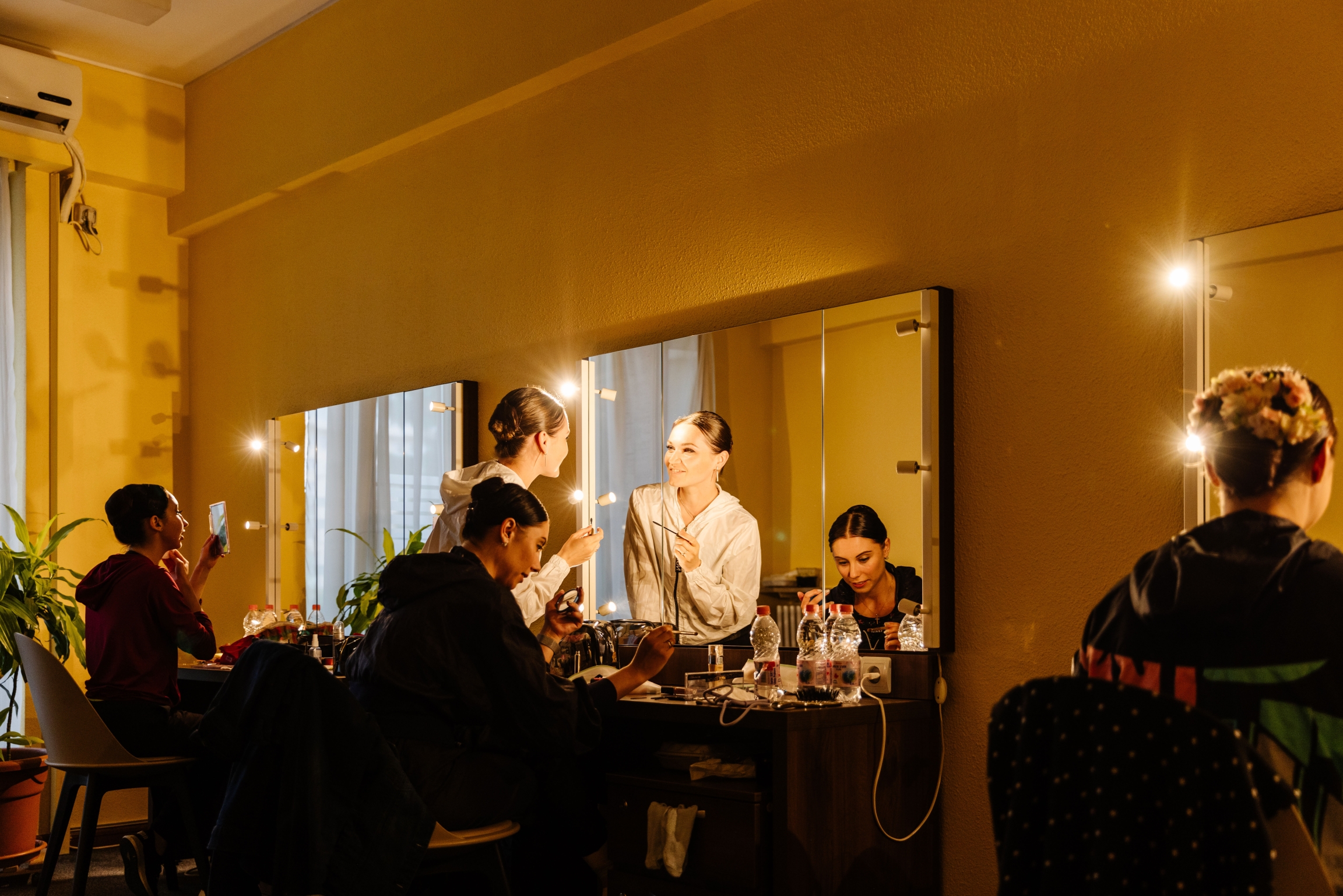 Theaters and performance venues all over Ukraine shut down when Russia invaded, leaving numerous musicians, artists and dancers out of work as they scrambled for safer ground or left the country.

“Dancers [now] have nothing because a lot of people from our art [left] with one suitcase.”

“Dancers [now] have nothing because a lot of people from our art [left] with one suitcase,” said dancer and the Ukrainian Classical Ballet's artistic director, Ivan Zhuravlov.

Some have found homes on stages alongside dancers from other countries with companies across Europe.

Zhuravlov himself said that he is uncertain where he’ll land after the tour ends. He used to live in Bucha, Ukraine, which has been devastated by the war. 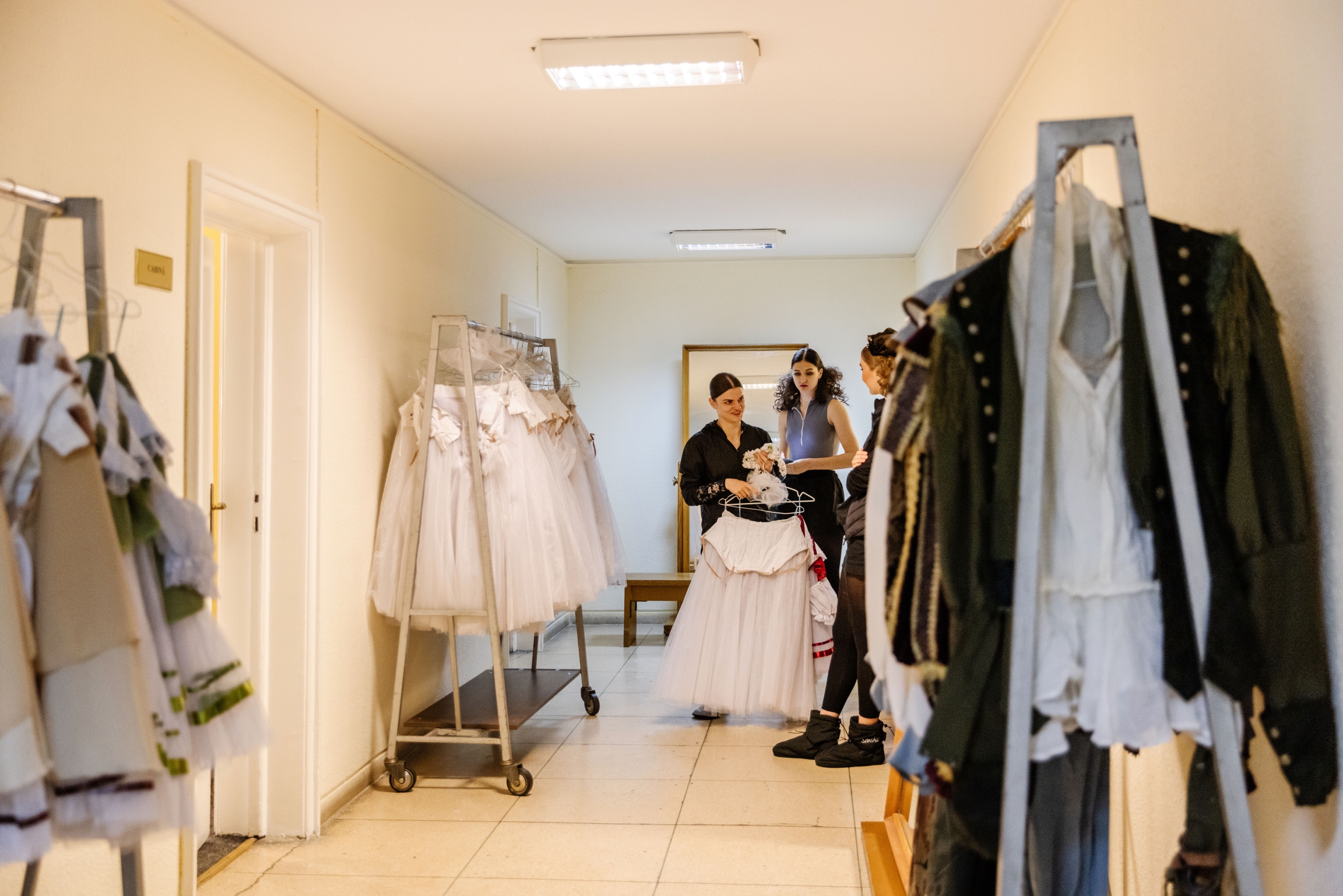 Daria Kostenko, Mariia Heichuk and Stella Fedorovich are shown backstage preparing to perform in “Giselle” with the Ukrainian Classical Ballet in Bucharest, Romania.

In five days, Zhuravlov said, he gathered up about 30 dancers from national theaters and companies all over Ukraine, many of whom had already fled the country, to rehearse for four days in Poland before performing a 12-show tour in Italy in April. Afterward, the company embarked on a six-show tour that included the Bucharest performance.

Summer is the low season for the ballet, and without a tour this spring, Zhuravlov said his dancers would be out of work for at least six months. That would mean a financial hit, and an especially long break for dancers who start training at age 5. 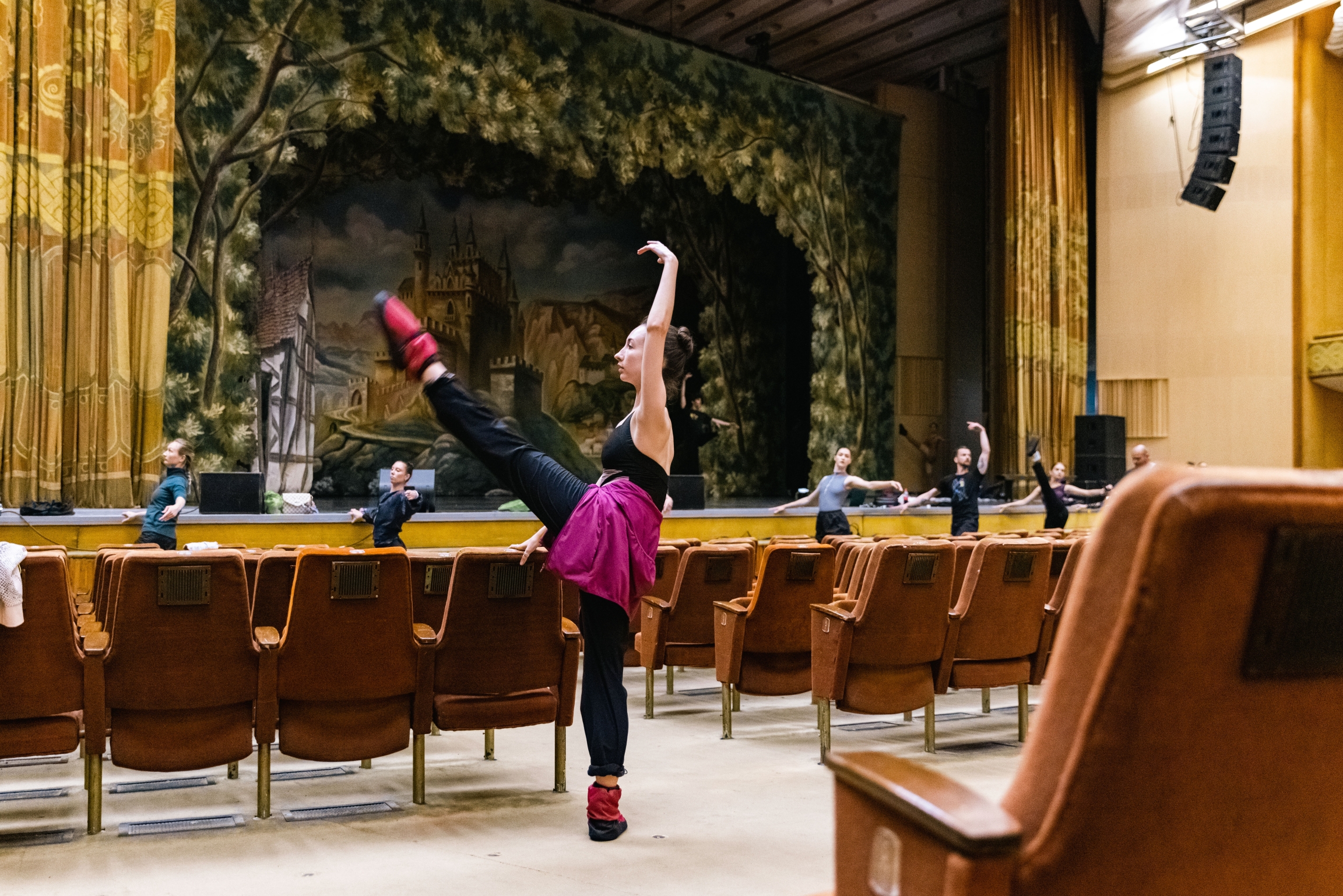 “For ballet dancers, ballet takes up 90% of their brains,” Zhuravlov said before a performance of “Giselle” in Bucharest on Saturday. “And now, the war canceled their professional life. It’s too difficult because it’s not just about work. It’s about your love, about your soul, about your spirit. It’s like oxygen.”

‘If we stopped, Russia would win’

It’s an experience that Kostenko knows all too well.

Related: 'Their lives collided with war': Ukrainian refugees in Poland open their own schools

Careers in ballet are competitive and short. To stay employable, there has to be somewhere to dance, she said. 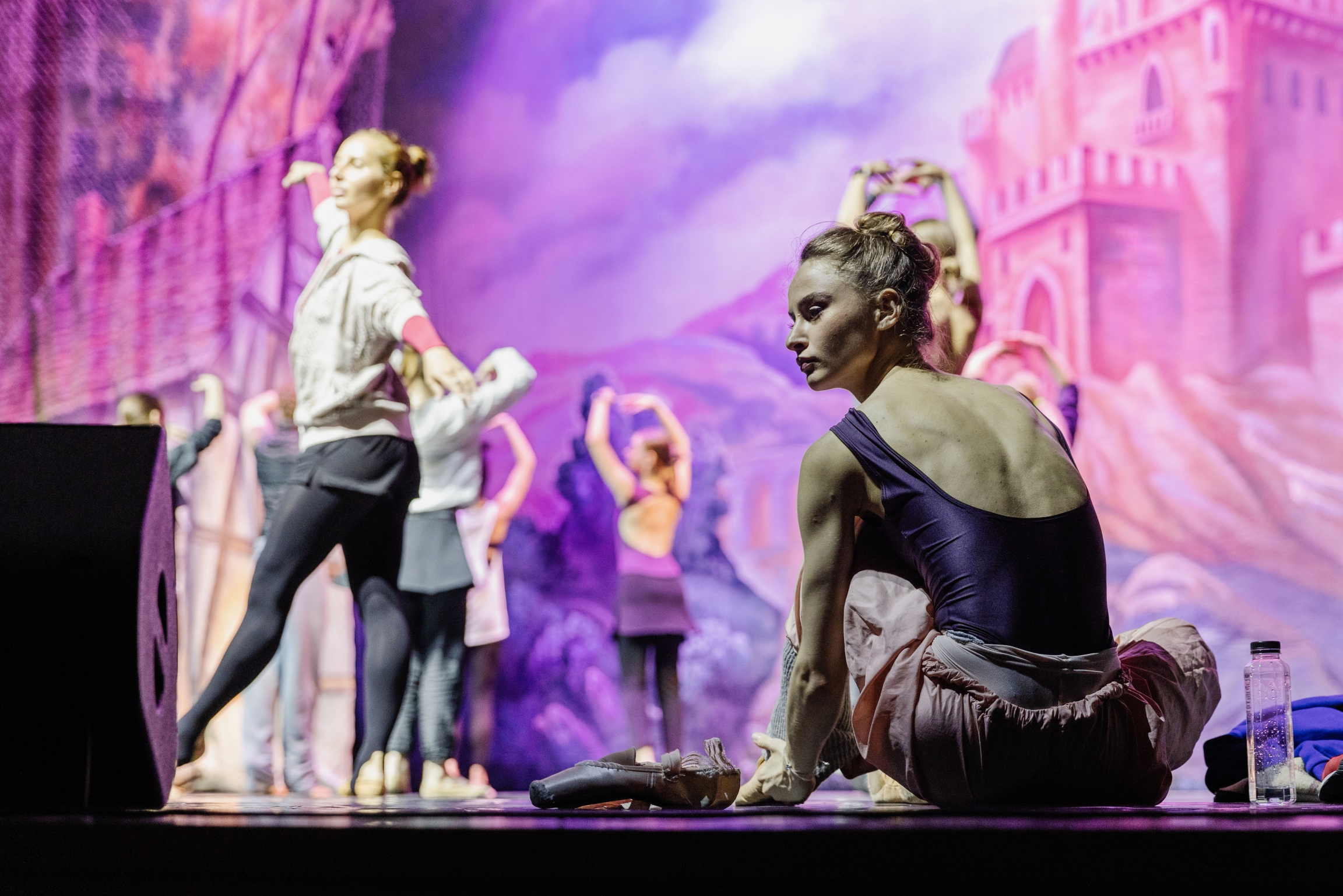 “Every artist, every dancer, needs to do classes every day because we lose our form, we lose our shape when we rest [even] three days,” she said. 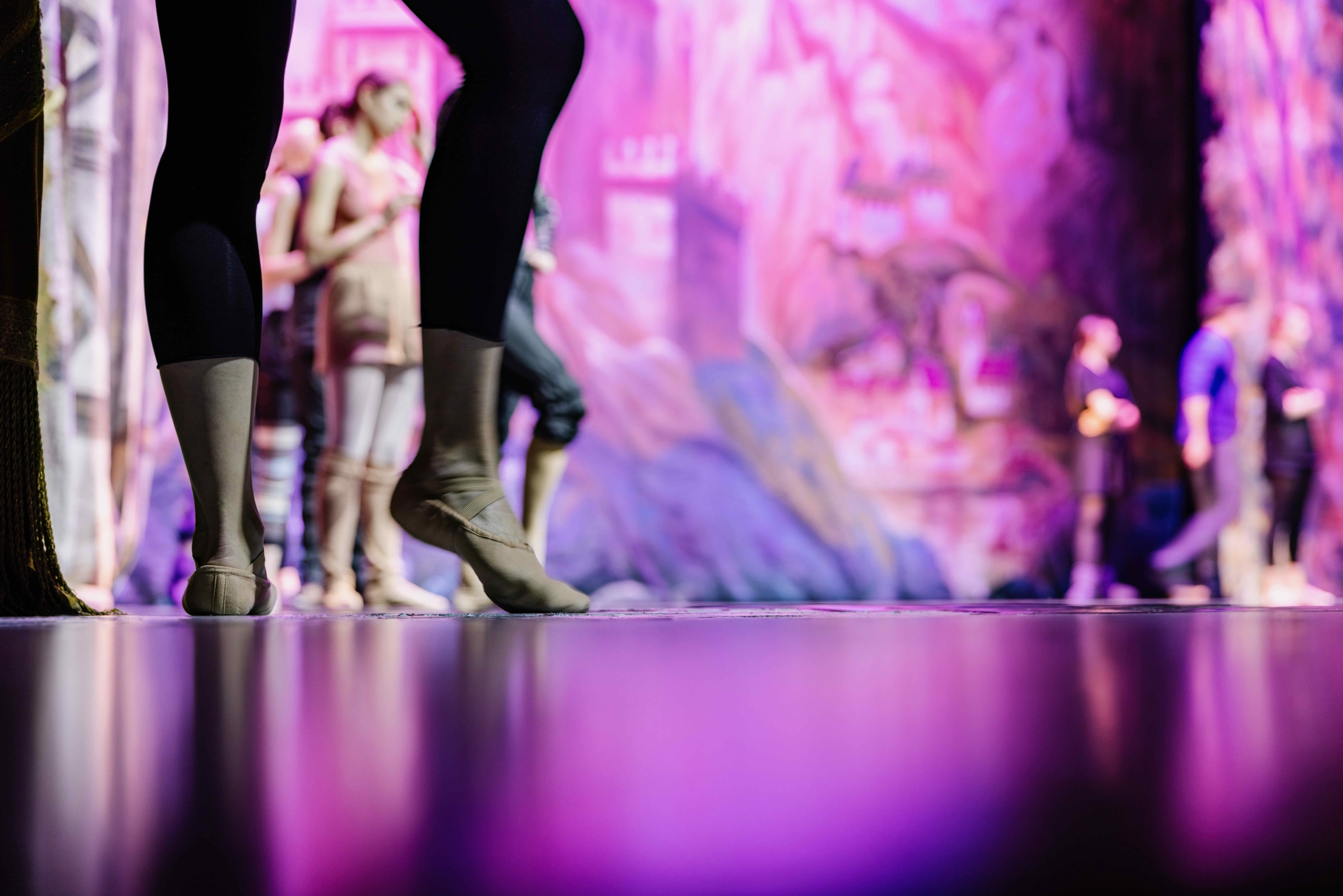 A pause during a rehearsal from the Ukrainian Classical Ballet at Sala Palatului theater, Bucharest, Romania.

Kostenko said it’s hard to keep a smile on her face and perform in character while she’s worried about her family members in Kharkiv, whom she only hears from a few times a month.

“But these tours help us forget about this situation for a little bit,” she said. 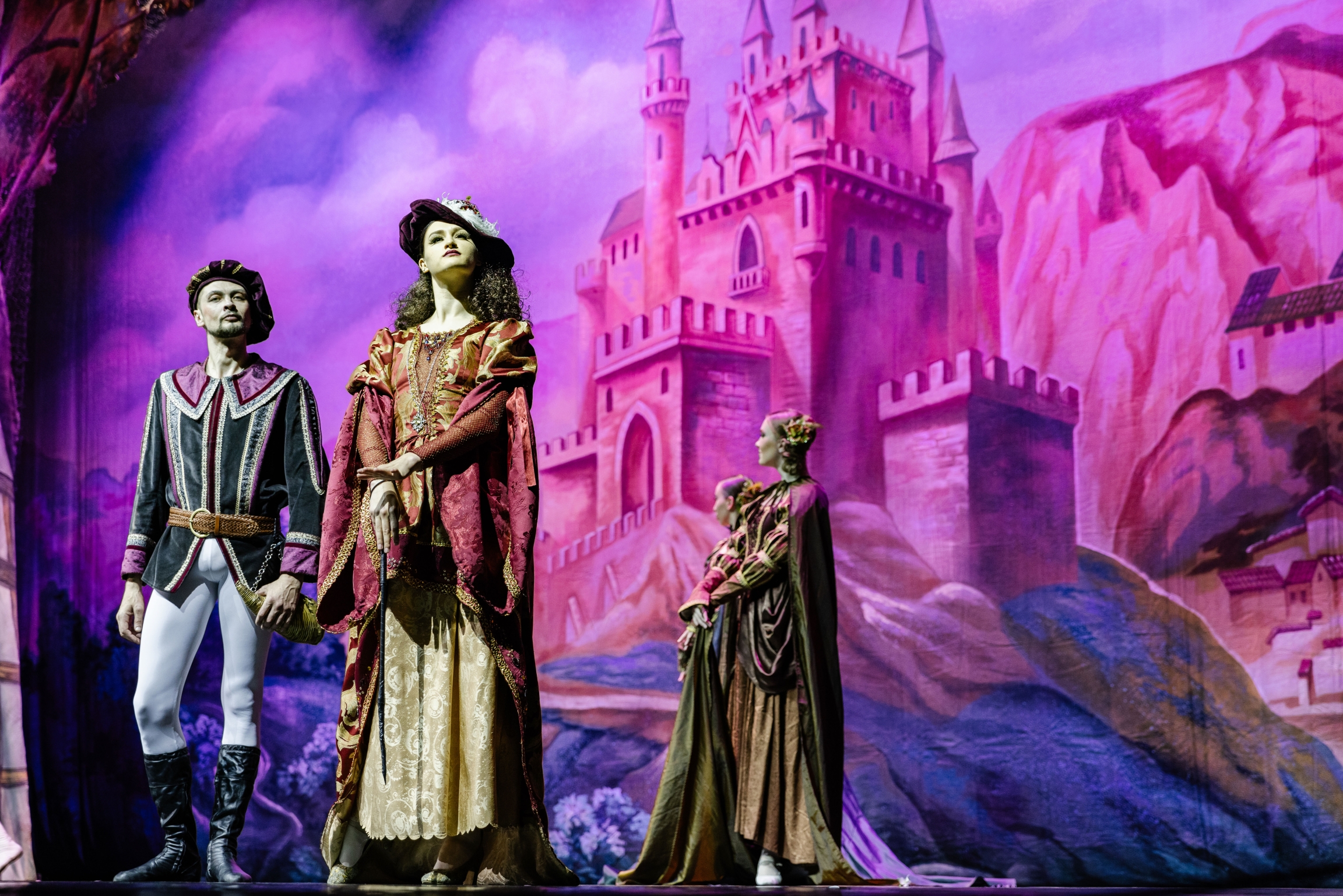 A scene from the performance of “Giselle” with Mariia Heichuk (front center) and Stella Fedorovich (back right) with the Ukrainian Classical Ballet in Bucharest, Romania.

Dancer Mariia Heichuk, who was already with the company before the war started, agreed that it’s a challenge to concentrate on stage, but she said that performing helps show how strong Ukrainians are.

“If we stopped, Russia [would] win. We must continue our lives, our culture — because Russia has bombed our museums and [other] important places, and we can’t stop it.” 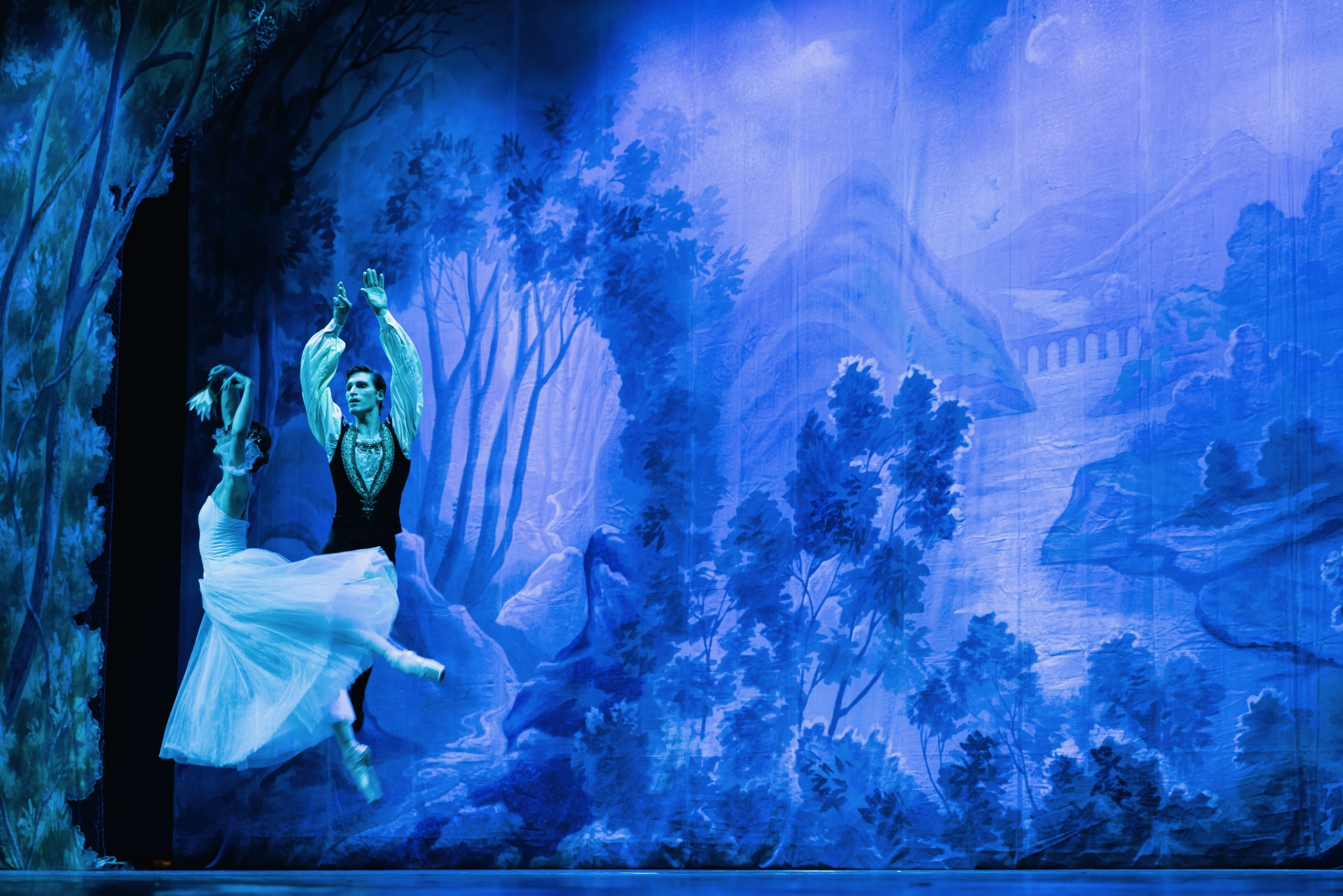 Ilona Kravchenko and Jan Vana perform in “Giselle” with the Ukrainian Classical Ballet in Bucharest, Romania.

Stella Fedorovich, who used to dance at the Dnipro Opera and Ballet Theatre, said the tour has helped her support her family financially and reassures them that she’s safe. 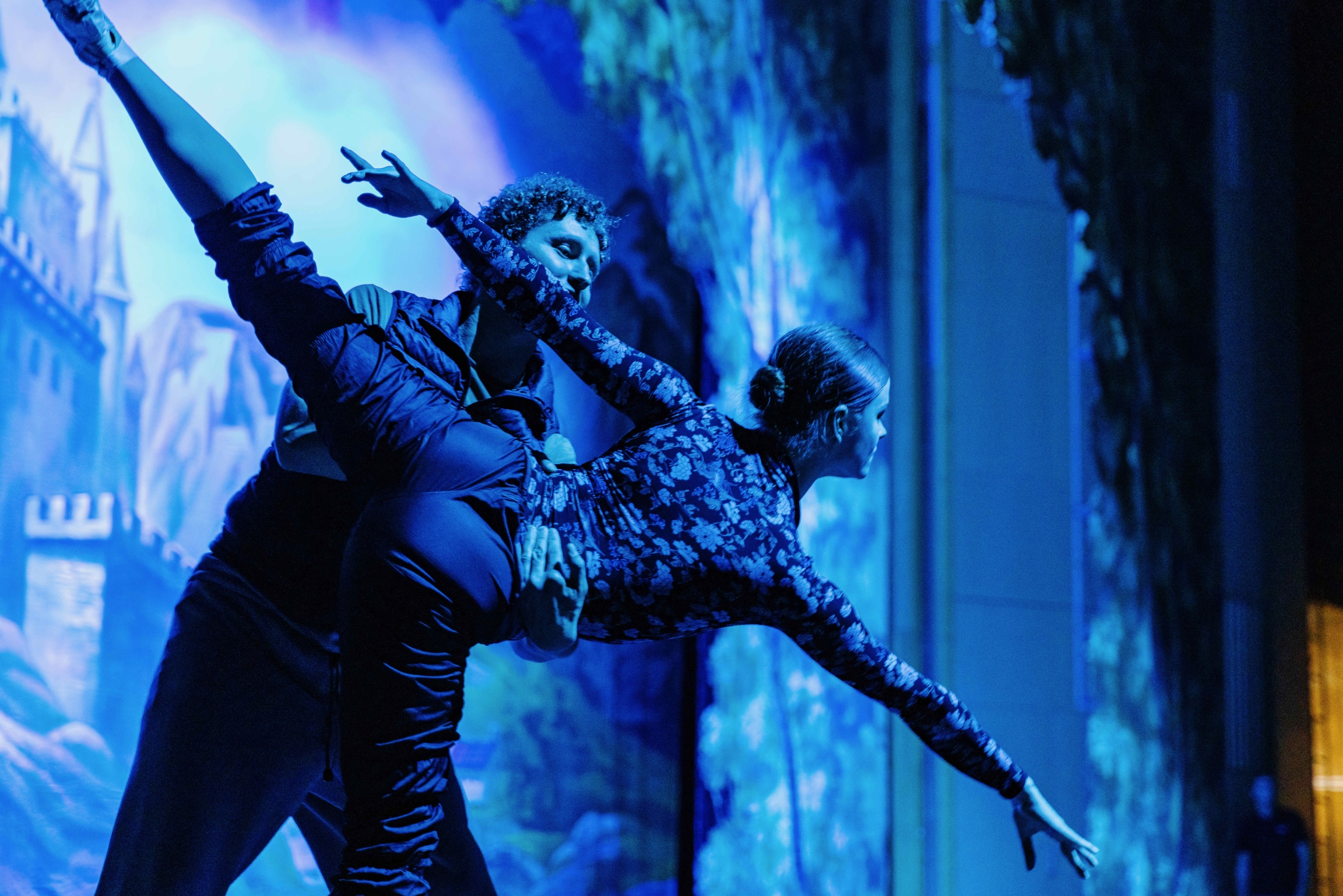 She said she has neverending hope that she'll dance in Ukraine next season. But if she can’t, she doesn’t know whether she’ll leave her country behind to continue dancing in another country. 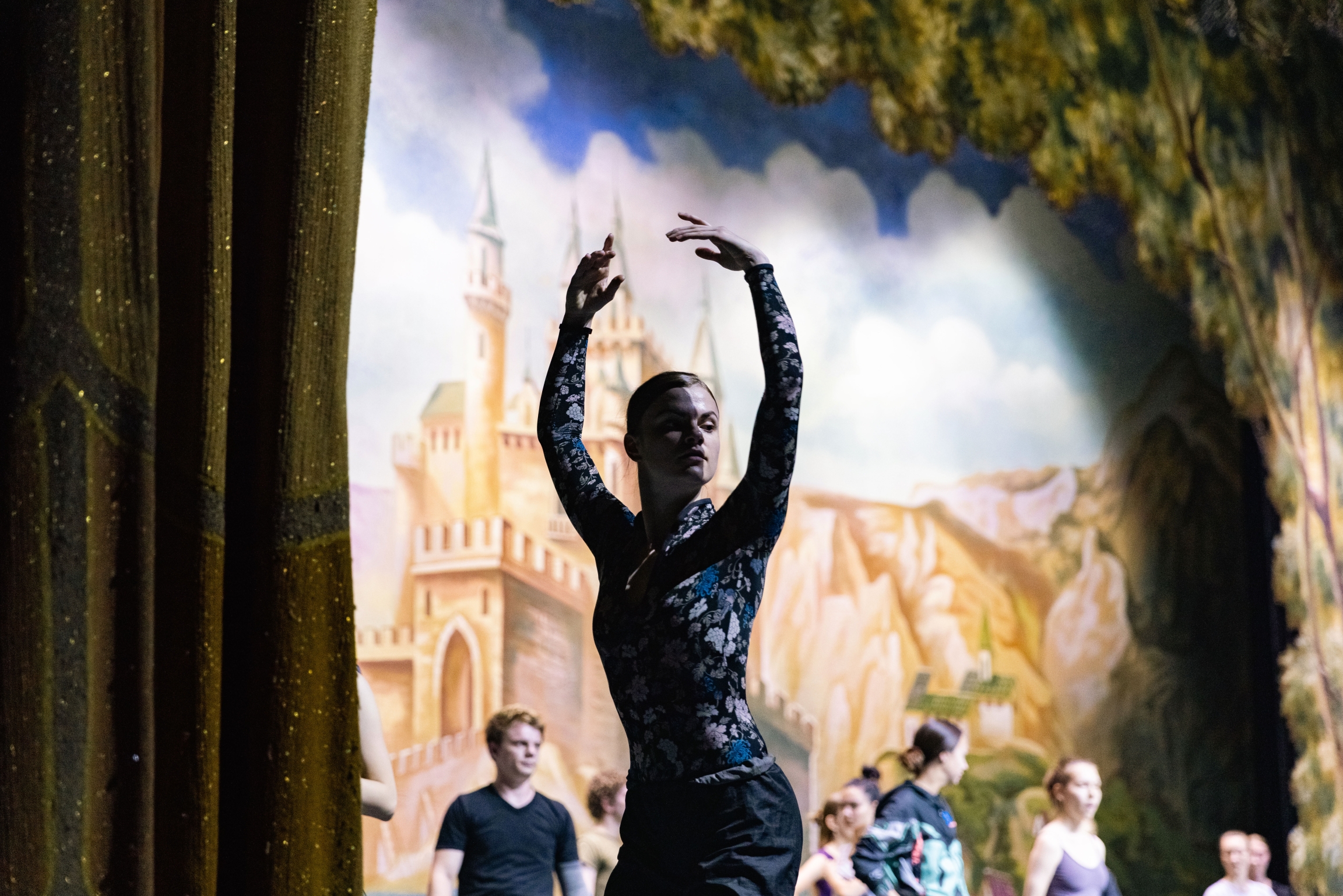 During Saturday’s performance of “Giselle” at the Palace Hall in Bucharest, the dancers played tormented lovers and a grieving mother. 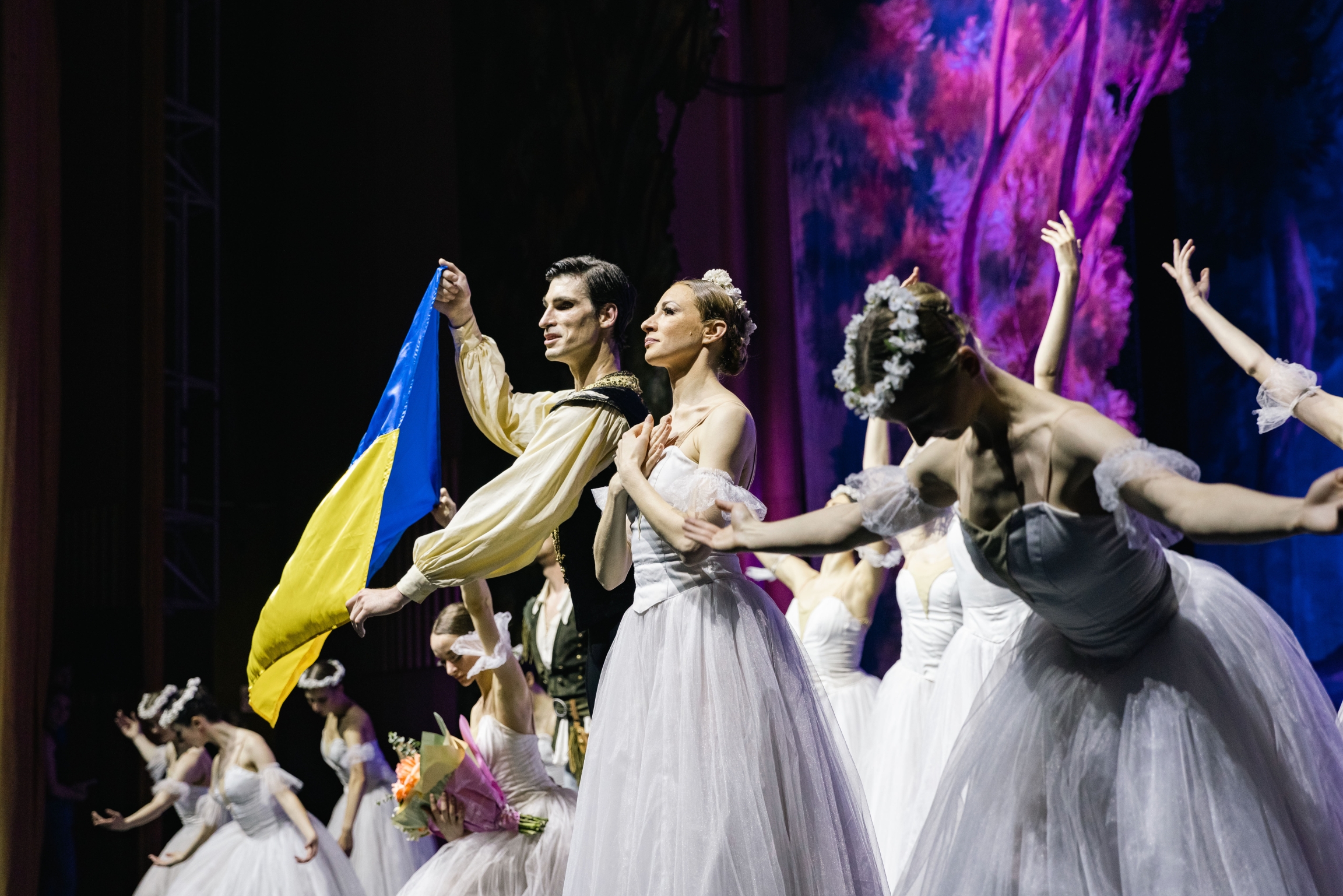 But the staged emotions were no match for the real ones on display at the end of the show — when the dancers unfurled the Ukrainian flag and sang along to the national anthem. The tears then were real.