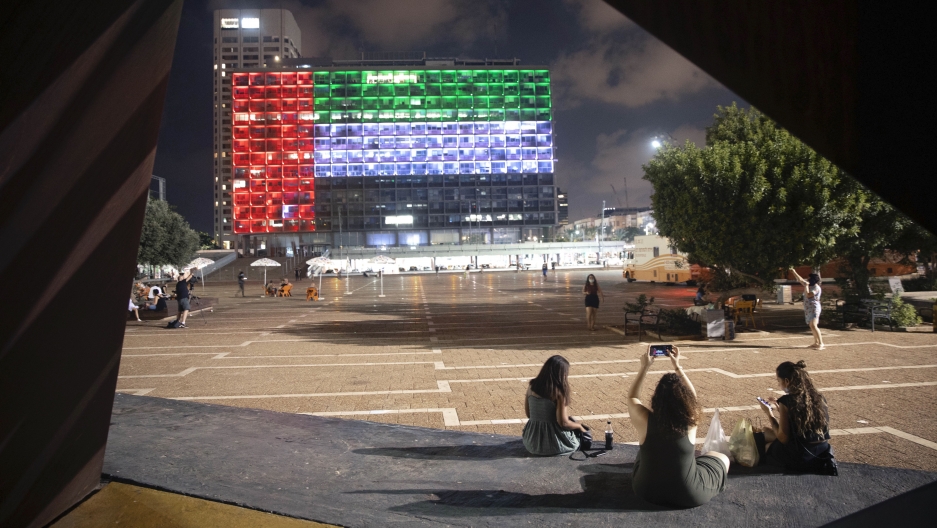 Tel Aviv City Hall is lit up with the flags of the United Arab Emirates and Israel as the countries announced they would soon be establishing full diplomatic ties, Aug. 13, 2020.

For the first time in more than 25 years, Israel could seal a historic diplomatic deal with an Arab country. US President Donald Trump made the announcement on Thursday about the impending pact, which he helped broker.

Israel and the United Arab Emirates look set to establish full normalization of relations. As part of that framework, Israel has agreed to suspend annexation plans in the West Bank. But Palestinian leaders aren’t exactly pleased about what they see as a betrayal by a fellow Arab nation.

Martin Indyk, a former US ambassador to Israel and currently a distinguished fellow at the Council on Foreign Relations, spoke with The World’s host Marco Werman about the ramifications.

Marco Werman: So, ambassador, the statement Trump released today reads that the sides reached the agreement today, but teams from both countries will only meet in the coming weeks to actually sign bilateral agreements on things like opening embassies and security cooperation. President Trump is calling this a peace deal, but is that what it actually is?

Martin Indyk: Well, it’s really a normalization deal. I don’t think there’s any peace treaty to be signed here. But what’s important is that there will be a full normalization of relations. And that means ambassadors, embassies in both capitals and establishment of direct communication, including direct flights and a host of other agreements that they seem to have in mind to negotiate. There’s no formal conflict between the UAE and Israel to actually end. But the fact that an Arab Gulf state is fully normalizing its relationship with Israel is the real breakthrough here.

So, Israel and the UAE have not had official relations. Both sides have hinted at unofficial cooperation, though, for years now. So, what has been the relationship between the two countries, and what changes now, actually?

Well, there’s been a great deal of cooperation under the table, as it were, for about 10 years now — since Israel and the UAE developed a common interest in dealing with the threat that they both saw from Iran. This has been enhanced in recent years by a common concern about Turkey as well. That’s what’s been driving this. What’s been holding it up is the Arab consensus, up until today, that normalization should not go ahead, absent progress, if not a deal, between Israel and the Palestinians. Instead, what’s happened today is that it’s been turned on its head. And that is to say, in return for no annexation, there would be full normalization. So, the UAE can claim that it’s protecting the Palestinian interests from the annexation that Netanyahu was previously determined to go ahead with.

And yet I saw Hanan Ashrawi, who’s a member of the Palestine Liberation Organization (PLO) executive committee, today tweeting: “May you never be sold out by your friends.” So, is this a signal by the Gulf States that they’re distancing themselves from the Palestinian cause?

Yes. And I can imagine that the Palestinians do feel a sense of betrayal, but they should have never gotten themselves up on the high branch of this tree of opposing normalization. The best solution for them is the solution that they tried in the past, and they should try again, which is to deal directly with Israel. But I do think that for some time now, the Gulf Arabs — we saw it with Bahrain and Oman, who were already advancing their relations with Israel in the last few years — the Gulf Arabs have felt that they no longer should hold their own relations with Israel hostage to the Palestinians. And so, I do think that we could see others following in the wake of the Emiratis, perhaps Bahrain, perhaps Oman. I don’t think Saudi Arabia yet, but you never know in that regard.

Many are going to see this as a foreign policy win for Donald Trump going into the November election. But are you confident in calling it — today — a win? And what do you make of the timing?

Well, the timing is highly political. The Trump peace plan was going nowhere, and the annexation had become politically fraught. It was offered by Trump originally for Netanyahu, to help [the Israeli prime minister] in his reelection. But the Arab reaction to the annexation, I think, held that all up. So, I think [Trump] traded it this time for something else. [As] I said, no annexation — in return for normalization. And so I think that he will claim some credit for this. It doesn’t resolve the Israeli-Palestinian conflict. It doesn’t remove any of the dangers that Israel faces in the region. But it does help to cement Israel’s relations with an important Gulf Arab country. And that’s important for Israel. And I think it’s important for the UAE. Eventually, it will prove to be, I think, important for peace [with the Palestinians].