In the city of Konya, adherents of a Sufi ritual meditation are torn between commercialism and tradition.

A semazen leans his head back while turning during a sema ritual at the Irfan Civilization Research and Culture Center in Konya, Turkey.

On a recent Friday evening, spectators gathered around a circular, wooden stage at a cultural center in Konya, Turkey. A single beam of light shined down on a man who placed a red sheepskin cloth on the floor.

A procession of semazen appeared wearing tall headpieces and long, white robes covered by dark cloaks. They ranged widely in age, but are all were men who enact the sema, a ritual meditation known in popular culture as actions of the “whirling dervishes.”

Related: ‘She’s in our hearts’: Devotees from China and Taiwan come together to celebrate the goddess Mazu 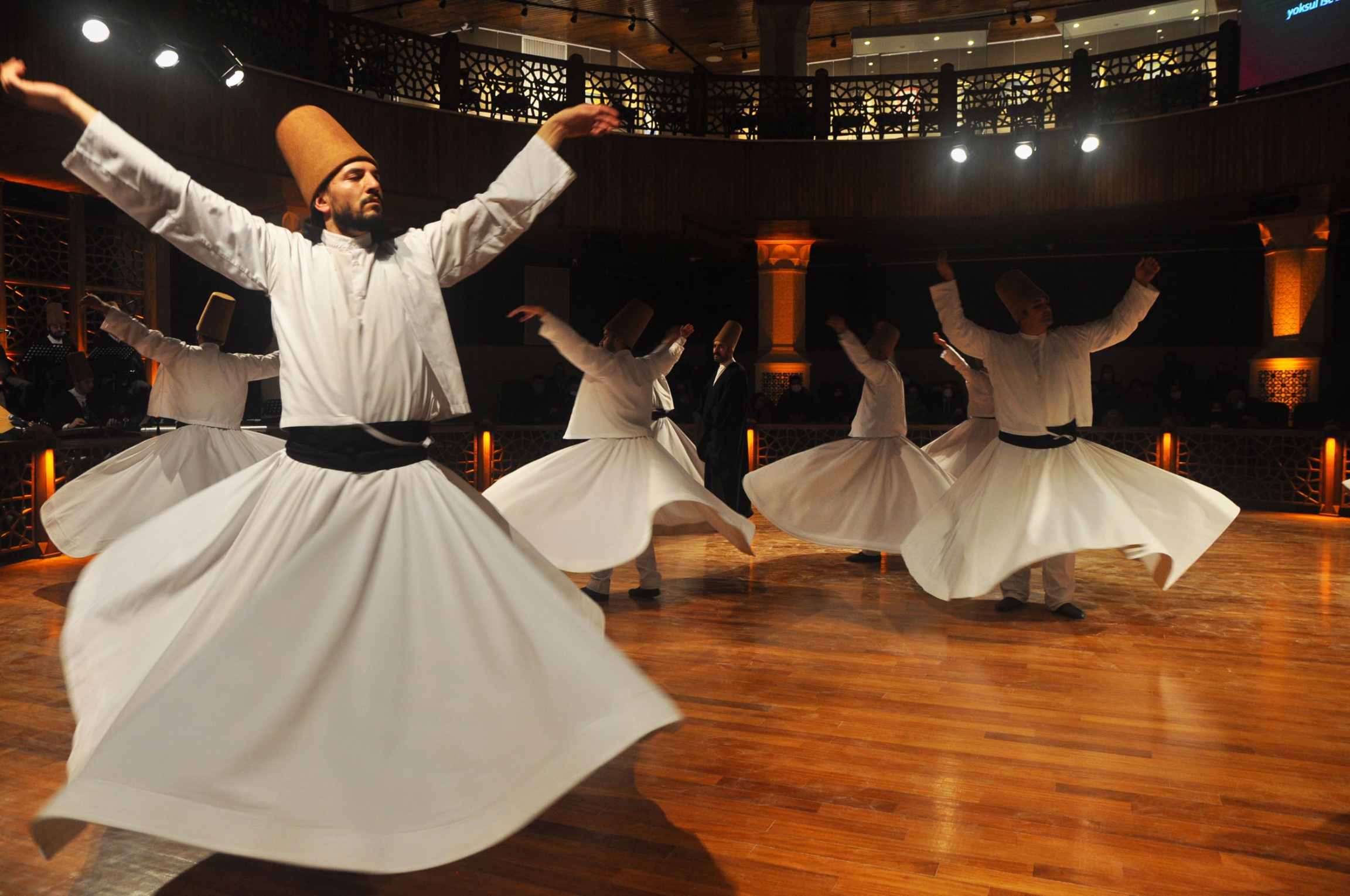 Osman Sariyer, 32, spins during a sema ritual at the Irfan Civilization and Culture Center in Konya, Turkey. By day, he works for the center as a tour guide.

Countless semazen — those who do the sema — live in the modern Turkish city of Konya, the final resting place of Jalalluddin Rumi, the 13th-century Persian poet, Islamic philosopher, and Sufi mystic who first popularized the sema.

Today, semazen must grapple with the push and pull between the promise of tourism income for the community and the nagging feeling that the sema should be a private affair.

In December, Konya hotels sell out for weeks as tourists arrive from around the world to pay their respects on the anniversary of Rumi’s death. In 2008, UNESCO inscribed the sema as one of the “masterpieces of the oral and intangible heritage of humanity.”

In this hubbub — where busloads of tourists arrive to buy tickets to sold-out “dervish shows,” and flock to the shops where they sell tiny figures of semazen souvenirs — it can start to feel overwhelmingly commercialized. 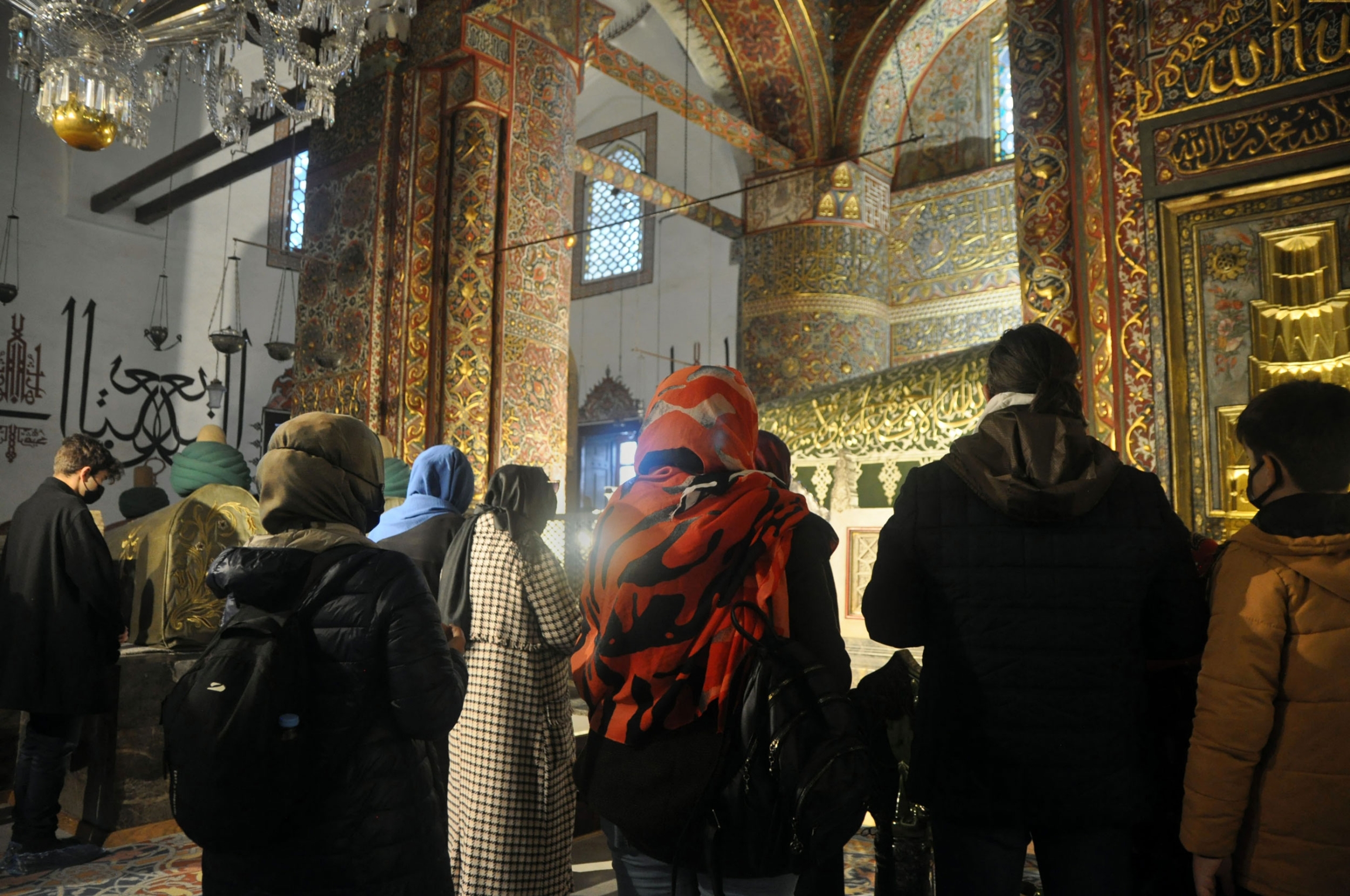 Visitors pray before the green tomb of Rumi, who died in Konya. Credit: Durrie Bouscaren/The World

But performing the sema for tourists is a way to share this ritual, Sariyer said. At the cultural center, the tickets are free, according to a long-held tradition that prohibits the exchange of money or engagement with politics when it comes to this practice.

“As semazens, we believe in the brotherhood of other religions, and we do not exclude anyone. Anyone coming here from any religious energy will feel that energy, and that’s what we’re trying to do here,” he said.

As the music begins, a solo from a type of flute known as the ney symbolizes the breath of God, blowing life into human forms. The semazen shed the outer layer of their clothing — an act of shedding the ego. They bow and begin to spin.

It’s hypnotic. The movement, the swishing of the feet. The smell of incense. Many of the ritual performers have a look of peace on their faces — eyes half-open, leaning back.

It’s a slow, controlled spin. One foot stays planted on the floor. At times, one hand reaches up to the sky, while the other points downward — a position meant to bring love from God down to Earth and its people. 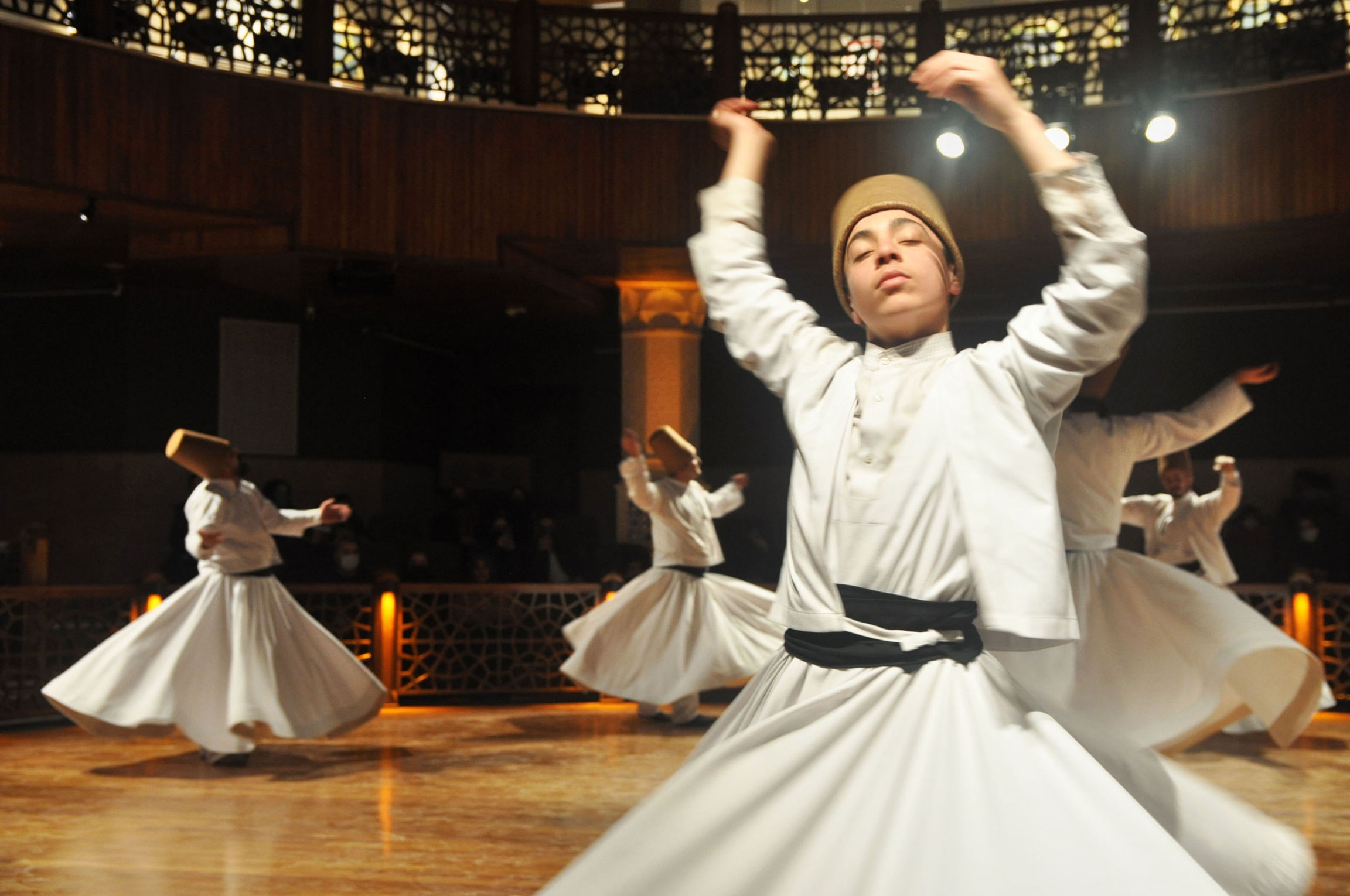 A young semazen during a sema ritual at the Irfan Civilization Research and Culture Center in Konya, Turkey. There is no age limit to learn the ritual, and some who do it publicly begin at an early age.

But outside the ritual, Sariyer explained, most semazens live regular lives. They get married, have kids and work desk jobs.

Related: Chile has a growing Muslim community — but few know about it

A private ritual made public

The origin story of the sema goes back more than 700 years, when Rumi is said to have walked through Konya, and got inspired by the clanging sound of goldsmiths hammering in a Seljuk bazaar.

According to tradition, Rumi began to spin as a form of meditation and prayer, and his followers continued the practice, passing down the tradition for centuries.

Ismail Fenter, 66, a semazen with the International Mevlana Foundation, said the ritual sema for the public is a demonstration, but it’s “really a very private thing.” (Mevlana means “our leader,” referring to Rumi.)

Fenter, originally from California, grew up Catholic and became a semazen after converting to Islam. Sufism is an Islamic philosophy of practicing faith through personal, direct experience with God.

“To have it done for money, to turn it into dance and art…I mean, from the true Mevlevi [Rumi follower] perspective. And I’m speaking only for myself. It’s not preferred.” 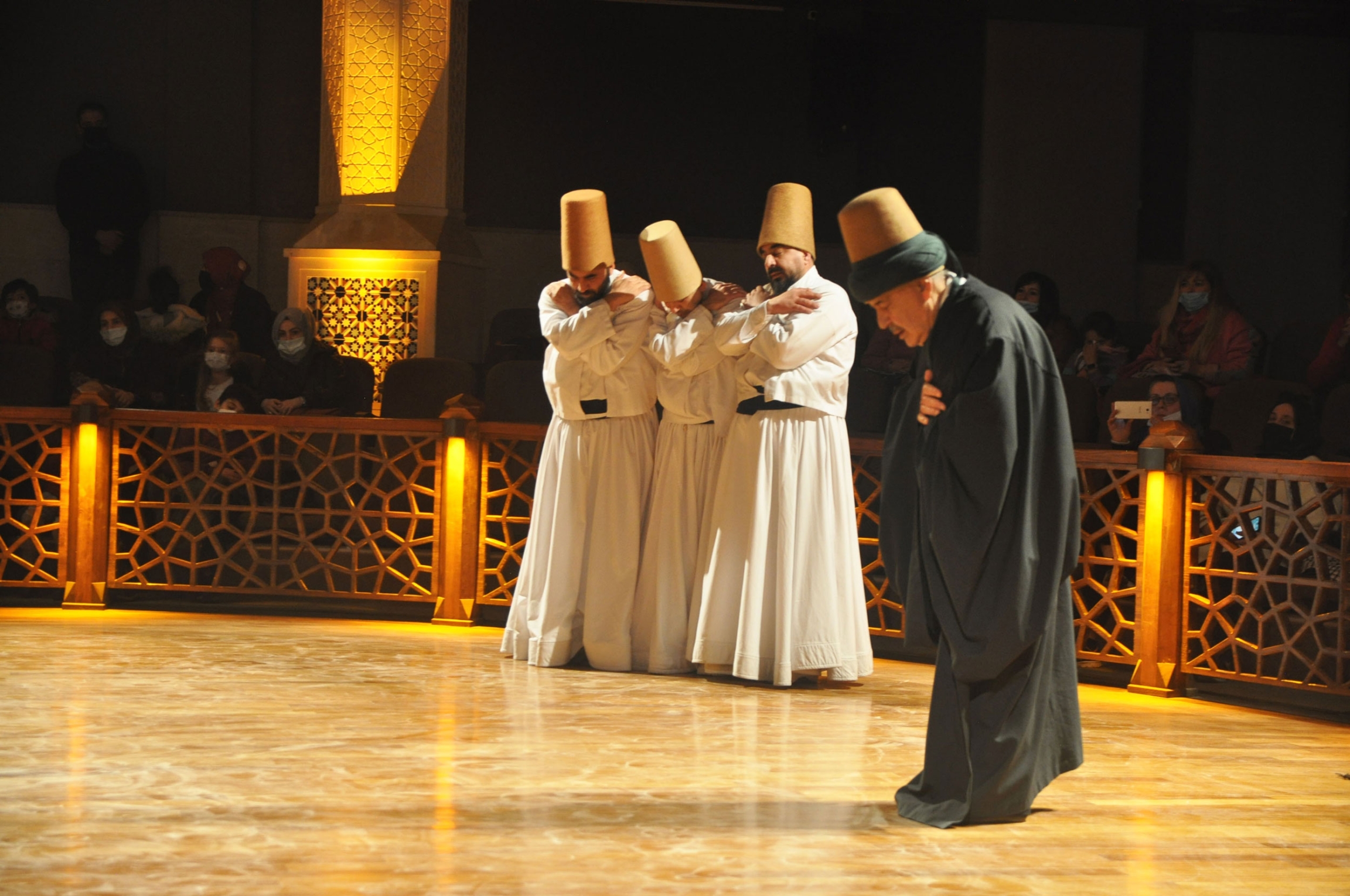 In the foreground, a dede bows at the end of the sema ritual. Dede is a title bestowed on those who lead the sema, and serve as religious teachers.

“To have it done for money, to turn it into dance and art … I mean, from the true Mevlevi [Rumi follower] perspective. And I’m speaking only for myself. It’s not preferred.”

Historically, semazens were organized in orders throughout the Ottoman Empire and beyond. The orders were banned in 1925, as Turkey became a secular republic. So, they went underground.

The semazens grew and learned about the practice within these orders, explained Nadir Karnıbüyükler Dede, a leader at the International Mevlana Foundation. When they were abolished, it became harder to pass on the traditions to the new generation.

“After the law was put in place, the tradition was continued by people who can live it in their soul."

“After the law was put in place, the tradition was continued by people who can live it in their soul,” Karnıbüyükler said.

The law is still on the books in Turkey, but rarely enforced today.

In his office at a construction firm, Adnan Küçük keeps a small square board on the floor — just 3-feet tall and 3-feet wide — to practice the turns of the sema.

“It gives you this excitement, this feeling of being overjoyed … I remember times that I would try to whirl more and more, so that feeling would never end,” Küçük said.

He’s been practicing sema for over 20 years.

Küçük’s father was one of those who upheld the tradition in those difficult decades, from the 1920s through the 1990s.

“After the closure of the orders, there were no real dedes, or Sufi leaders left to lead the path,” Küçük said.

By the 1990s, when Küçük was a teenager, there were very few young semazens in Konya. But one day, a Polish official called Konya’s tourism office to ask if they had any whirling dervishes they could send to participate in a youth festival.

Tourism officials recruited Küçük and his friends for a crash course in how to be a semazen. They were fitted for robes, learned how to turn, and flew to Poland for a demonstration that turned out to be a resounding success.

Küçük began doing the ritual publicly, in Konya and beyond, as demand increased for the ritual at weddings, with tour groups and even at shopping malls.

“They’d take us to a hotel, people would be eating — and as we’re preparing the sema they’re serving alcohol,” he said. “Which completely contradicts the ritual.” Alcohol is forbidden in Islam. 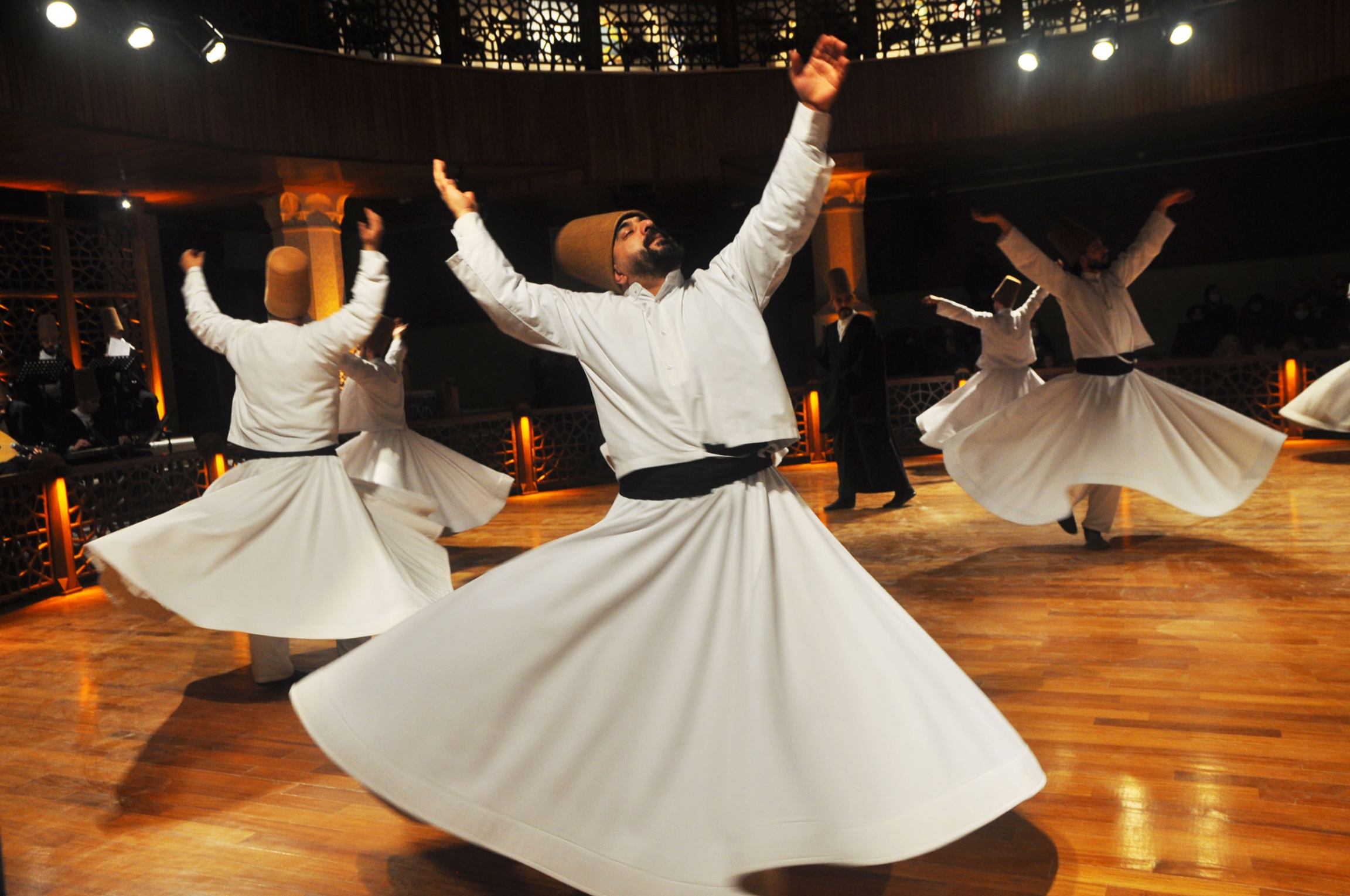 A semazen leans his head back while turning during a sema ritual at the Irfan Civilization Research and Culture Center in Konya, Turkey.

Küçük believes that no one should do the sema for any reason other than to express one’s dedication to God.

Now, he only gathers with a small group of friends to do the sema privately, meeting at least once a week before the pandemic began.

“In modern society, our minds are already so busy with worldly matters,” Küçük said. “There needs to be a place that’s cleansed of all that. These places give you room to breathe.”

“In modern society, our minds are already so busy with worldly matters,” Küçük said. “There needs to be a place that’s cleansed of all that. These places give you room to breathe.”