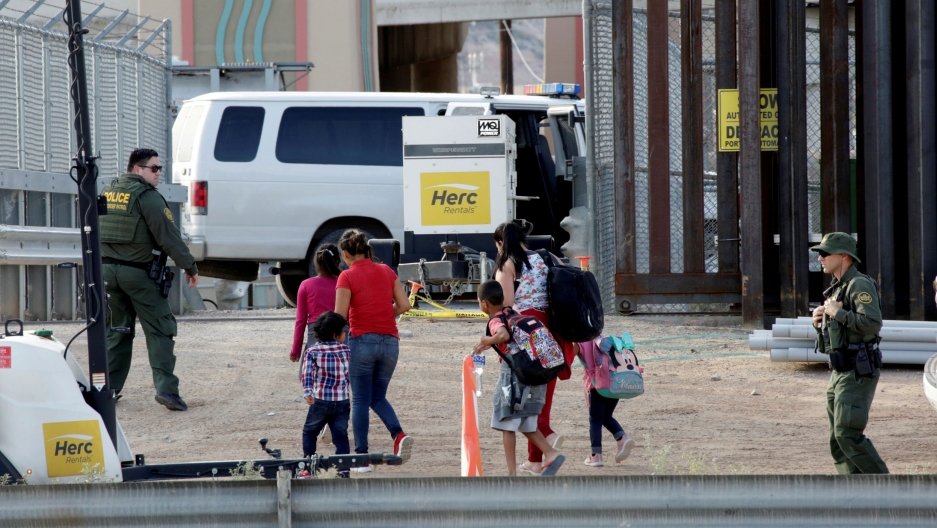 US Customs and Border Protection (CBP) agents look at migrants who crossed illegally into El Paso, Texas, to turn themselves in to ask for asylum, as seen from Ciudad Juárez, Mexico, Sept. 18, 2019.

On Thursday, the Trump administration issued a proposal that would dramatically reshape the asylum system in the United States.

The proposal includes a number of changes that would make it more difficult for applicants to gain asylum in the US — including changing which applicants would get asylum hearings in the first place.

Applications based on people fleeing gangs, terrorists, “rogue” government officials or “non-state organizations” would no longer be recognized, meaning that those fleeing persecution from organizations like ISIS would not qualify for protection.

Last July, the Trump administration established another set of rules — requiring migrants fleeing their homelands to apply for asylum in one of the first countries they pass through.

Currently, asylum claims have essentially been halted by border closures after Donald Trump declared a public health emergency because of the coronavirus pandemic.

Luis Cortes-Romero is an immigration lawyer in Seattle. He spoke with The World’s host Marco Werman about the potential impact of the proposal.

Marco Werman: How sweeping of a change is this, Luis, to our existing asylum system? And what was your reaction to the proposal?

Luis Cortes-Romero: This is a humongous structural change to the already very limited rights that asylum-seekers have. It does a lot to turn away recent arrival asylum applicants but also does a lot to erode the rights for people who are already in the United States who may want to seek asylum in the future.

So, what are the details? How exactly would these proposed changes make it more difficult for migrants to claim asylum in the US?

It provides a lot of barriers and hurdles to even apply, and it makes it significantly easier and streamlined in order to deny their application. Let me give you some examples to be concrete: One of the things the proposal does is makes it so that anybody who has spent more than 14 days in any other country before coming to the United States … would be banned then from applying for asylum here. So, that applies to a lot of the Central American migrants or people who come from South America, [for] whom oftentimes, it takes them a month to get here.

Related: How the US immigration system nearly tore this LGBTQ couple apart

We also need to discuss DACA here — Deferred Action for Childhood Arrivals, the program that allows undocumented immigrants who were brought to the US as minors to remain here to study or work. If the Supreme Court rules against DACA — we’re still waiting for some decision — could these new changes impact DACA recipients who try to seek asylum in the US?

One-hundred percent. If the Supreme Court strikes down DACA, what the heads of the Department of Homeland Security have made clear is that they do plan to place DACA recipients into removal proceedings, the process it takes for someone to be ultimately deported. That typically goes with a hearing before an immigration judge. The one lifeline that DACA recipients could have had to try to save themselves in removal proceedings is now being not only structurally changed but gutted from all its due process rights. So, ultimately, the consequence will be that once DACA recipients are placed in removal proceedings, the ability to fight your case to stay here now is significantly diminished from an already limited basis.

Related: Trump ended DACA. This woman is suing to stop him.

You yourself are a DACA recipient. You were also part of the legal team that argued to the Supreme Court for DACA’s continuation. How are you seeing this raft of restrictions once you look at the sum total?

Certainly, it’s going to be met with a lot of legal challenges because the fundamental notion that the United States has is the ability to be heard and the ability to have a fair proceeding. So, we think there’s going to be a lot of legal challenges, you know, challenging the stripping away of the basic due process rights that asylum-seekers might have, which ultimately may include DACA recipients in the future.