Three deaths have been confirmed by Tongan authorities. The eruption was so powerful that people as far as 2,000 miles away could hear it, and volcanic ash plume grew to 180 miles across the island in less than an hour.

In this photo provided by the New Zealand Defense Force, volcanic ash covers roof tops and vegetation in an area of Tonga, Jan. 17, 2022. Thick ash on an airport runway was delaying aid deliveries to the Pacific island nation of Tonga, where significant damage was being reported days after a huge undersea volcanic eruption and tsunami.

Three deaths have been confirmed in the Pacific nation of Tonga after a massive underwater volcano in the South Pacific erupted on Saturday.

The eruption of the Hunga Tonga Hunga Ha’apai volcano, located just 40 miles away from Tonga’s main island, Tongatapu, sent a mushroom cloud of volcanic ash high into the atmosphere and tsunami waves across the Pacific, from Japan to California.

The surprise eruption knocked out phone and internet services, sending the South Pacific island nation into a virtual black out.

In the last 24 hours, photos from military surveillance flights sent by New Zealand and Australia have begun to surface, revealing battered coastlines, damaged buildings and fallen ash blanketing the landscape. 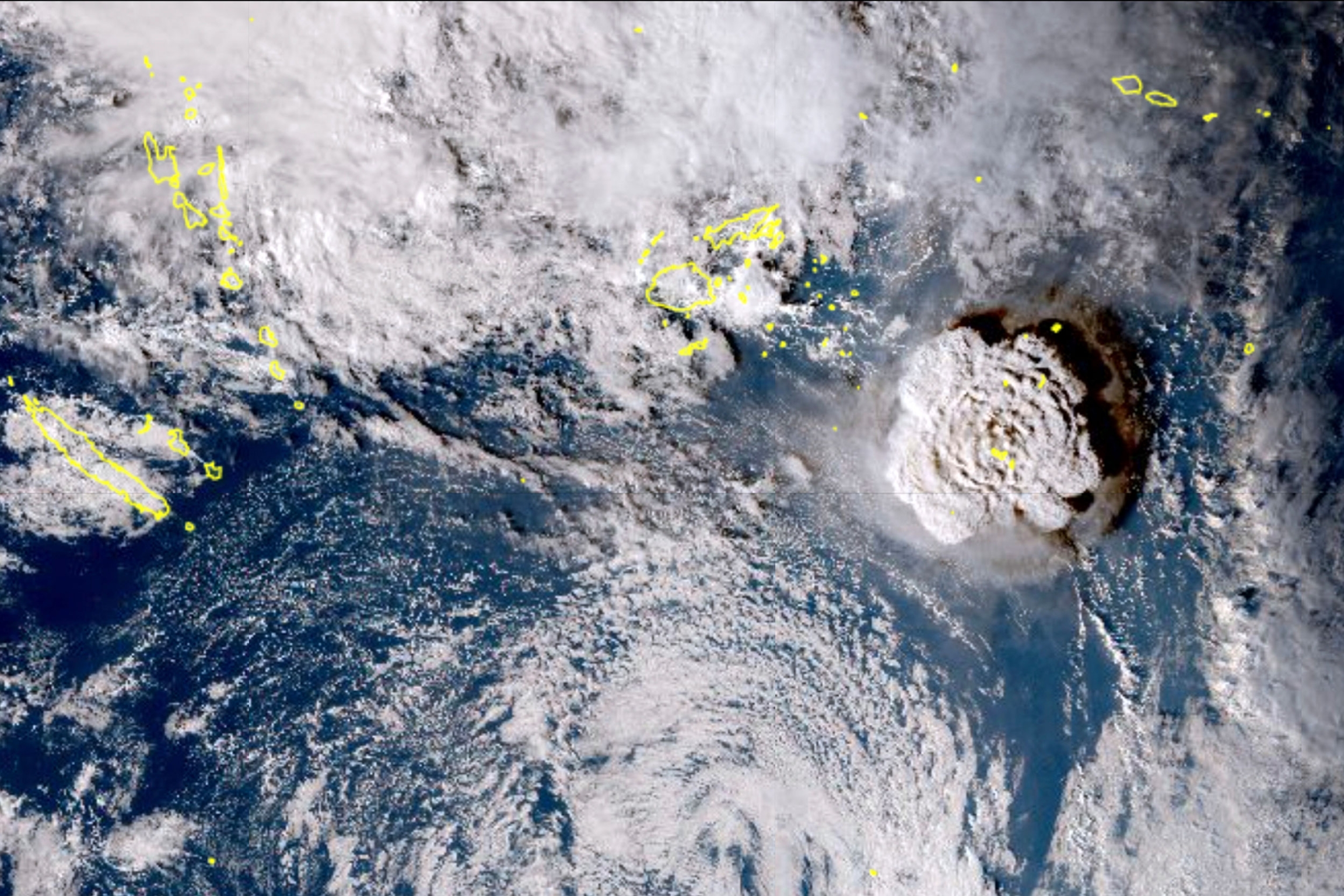 This satellite image taken by Himawari-8, a Japanese weather satellite, and released by the agency, shows an undersea volcano eruption at the Pacific nation of Tonga, Saturday, Jan. 15, 2022.

On Tuesday, Tongan officials released their first statement since the blast confirmed what many had feared — widespread destruction, injury and death.

The release stated that telecommunications had been knocked out due to damage to the international fiber optics cable that serves the country, and that search and rescue operations were ongoing.

Meanwhile, many islands sustained damage and Tonga's water supplies “have been seriously affected by the volcanic ash,” officials said.

Future eruptions are predicted to be less intense than the one on Saturday, but the uncertainty could hamper post-eruption clean-up.

Both New Zealand and Australia say they are poised to send further aid as soon as conditions make it possible.

Related: Nerves on edge as volcano erupts on island in the Canaries

An eruption heard around the Pacific

People as far as 2,000 miles away could hear the eruption, which the US Geological Survey reported was the equivalent of a 5.8 magnitude earthquake.

In Suva, Fiji, nearly 500 miles away from the volcano, Vikrant Singh said the sounds reached him when he was at the pharmacy late Saturday afternoon.

“While I walked from the car park to the pharmacy, I was hearing all these booming sounds, which at first I ignored,” he said.

Then the sounds got louder.

“At first it was sort of like thunder, but then it became very constant like Bang! Bang! Bang! And then the tremors sort of started, like the door of the pharmacy started to shake."

“At first it was sort of like thunder, but then it became very constant like Bang! Bang! Bang! And then the tremors sort of started, like the door of the pharmacy started to shake,” Singh said.

He estimated that the noise continued for about 30 minutes, during which Singh headed down to the seaside where he saw what appeared to be the beginning of a tsunami — the water receding into the sea.

“The water just receded, and you could see all the sand, then it comes rushing back in. Then it recedes and comes rushing back in,” he said. It wasn’t until then that Singh learned through messages from friends and social media that the shaking and booming was coming all the way from Tonga.

Videos of the eruption recorded in Tonga before telecoms went out show a giant plume of ash rising above the ocean nearly 20 miles high, mixing with lightning and swirling above a gray sea.

Tongan authorities issued a tsunami warning for the country’s roughly 100,000 residents, and it wasn’t long before people started sharing videos of huge waves crashing onto the shore of Tongatapu, the largest island, under a darkening sky.

Not long after, the phone lines and internet cut off — with the last images on the ground showing ash raining down from a black sky. 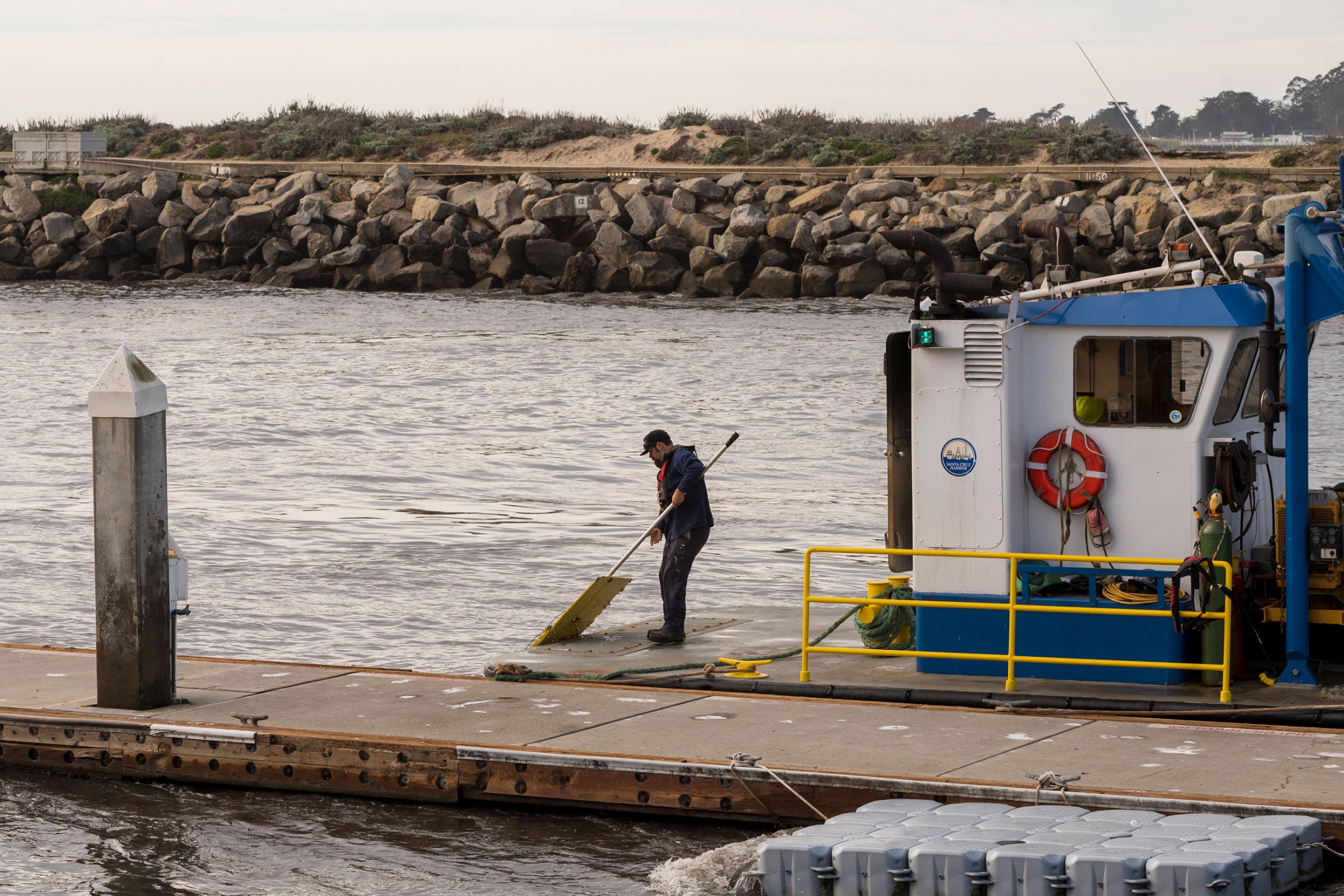 Following the eruption, tsunami warnings rang out across the Pacific, with places as far as away Japan later reporting waves up to 3 feet. The US West Coast also experienced a water surge and some flooding.

Marco Brenna, a volcanologist with the University of Otago in New Zealand, said Saturday’s eruption was a 1-in-1,000-year event.

“Over the previous 100 years, there was nothing really that was indicating that there could be such a very large explosive ensuing. … So, I think it caught everyone by surprise.”

“Over the previous 100 years, there was nothing really that was indicating that there could be such a very large explosive ensuing,” he said. “So, I think it caught everyone by surprise.”

The eruption was so powerful that, not only did the volcanic ash plume grow to 180 miles across in less than an hour, the incident also produced an atmospheric pressure wave that scientists say reached as far as Finland.

This is the volcano’s second eruption in less than a month, and Brenna said it’s not finished.

“There will probably still be a hopefully small-scale eruption for several weeks. Now that the volcano’s edifices have collapsed, there is basically a free pathway for magma to reach the surface,” he said.

While the continued eruptions are predicted to be less intense than on Saturday, the uncertainty could hamper post-eruption clean-up, experts said.