Teen climate activist Howey Ou is considered China’s Greta Thunberg, taking to the streets to speak out about climate change. But in a country where speaking up comes with big risks, Ou’s path is often a lonely one.

Speaking up in China often comes with big risks. But Chinese teen Howey Ou thinks that the issue of climate change is too important to stay quiet.

Ou, 18, is a climate change activist who grew up in Guilin, in a beautiful mountainous region of China. “This spirit of nature is embedded in my blood and bones,” she said.

An online video shot last year in southern China shows the teenager with choppy bangs lying on a stone bench in a park next to a lake with the peaceful sounds of retirees doing their evening exercises nearby. She’s alone, with a few signs set up in front of her.

One in English says, “Student Climate Strike.” In Chinese, it says, “There’s no vaccine for the climate crisis.”

Ou has been involved with environmental issues going back to the start of high school.

“I read a small booklet by the Chinese Vegan Association about how veganism is part of the solution to global warming. … I tried a three-day diet experiment. These three days are the first time that I first practiced some big lifestyle changes about ecology in my life.”

“I read a small booklet by the Chinese Vegan Association about how veganism is part of the solution to global warming,” she said. “I tried a three-day diet experiment. These three days are the first time that I first practiced some big lifestyle changes about ecology in my life.” 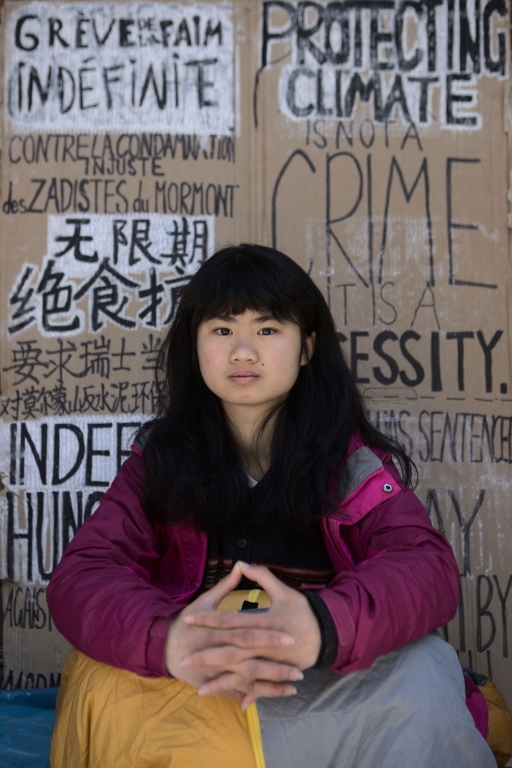 She decided to go vegan. Her family wasn’t supportive at first.

“They think there is probably something wrong with me,” she said. “They are just really confused, trying to persuade me to have some meat.”

Ou said she didn’t stop there.

She promoted the use of biodegradable plastic bags at school. At school and at home, she took every opportunity she could to talk about environmentalism and to educate others.

It didn’t take long for her to realize this would be a lonely path.

"I feel like, although I didn't find anyone who will do the same as me, [I'll] just continue doing this,” she said.

Ou said she set goals for herself — to go to Harvard University and become a voice for a healthy planet, like Al Gore.

Then in 2019, she got an email about the first global climate strike and how students around the world were coming together to work on climate change.

“They all came together this day, they really sacrificed themselves to make a change and this really inspired me,” she said.

She saw Fridays for Future student climate striker Greta Thunberg on the internet and how she walked out of school to protest at government offices.

Ou says she was inspired to join a Chinese climate activist group like the movement Thunberg ignited, but she couldn’t find one.

“I actually [thought] … what if I do the same as her,” she said. “I just don't know how it will be possible. I feel I have this responsibility because I’m a part of this country, this nation, but it is unimaginable what will happen when I stand in front of the government to do this strike.

Ou said she was scared about the idea of speaking up in China. Authorities are often quick to shut down most protests. Her parents were concerned, too, and consulted relatives. In the end though, Ou decided to take the risk anyway.

In late 2019, she went to a crowded area in the city center and displayed her signs for a few hours every day. After a week, the police detained her and her parents for several hours. They asked her to promise not to protest ever again.

Since that first visit to the police station, Howey Ou has traveled around China, staging one-woman climate strikes in several cities. On occasion, she’s joined by a supporter or two, but mostly she goes out on her own.

Another video from one of Ou’s actions shows her on the street, trying to engage people in conversation about the environment. The two young women she is speaking with seem interested in what she has to say.

But many others don’t understand what she is trying to do. They’ve never heard of Greta Thunberg or the student-led climate movement. Her methods seem very foreign to some people in China.

“There are even older people who are passing by, and they said I should learn more about Chinese traditional culture — not do this foreign stuff."

She said some even criticized her methods. “There are even older people who are passing by, and they said I should learn more about Chinese traditional culture — not do this foreign stuff,” she said.

But that didn’t stop her. Earlier this year, she decided to take time off from school.

Now, as a student abroad, she’s had the opportunity to travel around Europe and meet other climate activists. She said she plans to return to China and doesn’t see herself as a dissident or her protests as political. She just wants to raise environmental awareness in China.

Youth activists in the West see Howey Ou as sort of a Chinese Greta Thunberg.

But inside China, she’s got her critics, according to Yifei Li, the author of a book called "China Goes Green," about China’s official attempts in improving efforts to combat climate change.

He said youth activists like Ou are rare in China, because of the way the government’s education methods are structured for young people.

“Most of the time, climate change is described as a purely scientific problem, a problem that top scientists at places like the Chinese Academy of Sciences are working on and that they will have a solution for; that this isn’t something that ordinary citizens ought to be worrying about."

“Most of the time, climate change is described as a purely scientific problem, a problem that top scientists at places like the Chinese Academy of Sciences are working on and that they will have a solution for; that this isn’t something that ordinary citizens ought to be worrying about,” he said.

Li said it’s unsurprising that Howey Ou’s style of activism is not really catching on in China.

"It’s a campaign style that the stability-obsessed government of China is very much trying to suppress, so she, on the one hand, is up against the cultural norms of what effective advocacy looks like, and on the other hand, she’s up against a lot of government pressure within China.”

But she also has admirers in China, from the media to other environmentalists.

Kate Wang, a vegan environmentalist in Kunming, said that environmentalists in China are more likely to take more socially and politically acceptable paths of activism, from forming environmental nongovernmental organizations, to translating scientific journal articles, to teaching outdoor education, or promoting a zero-waste lifestyle and vegetarianism.

But activists who follow Howey’s less common path are unusual, she said.

“[Howey Ou] is our pride, because she’s willing to speak out."

“She’s our pride, because she’s willing to speak out,” she said.