Lebanon has 18 recognized religious sects, and sectarianism is built into the country’s political system. But in the wake of the October 2019 protest movement, some are advocating for a different path.

On a recent November day in Beirut’s Martyrs’ Square, Hussein El Achi points to where he had set up his tent during the protests in 2019.

Achi, a lawyer and political activist, spent weeks at the square, chanting slogans and calling attention to their grievances.

Protesters in 2019 had diverse demands — from the resignation of politicians to more rights for women and LGBTQ people, as well as environmental concerns.

More than two years later, protesters like Achi are no longer looking for change through chanting in the streets. For them, it’s not about blaming politicians for Lebanon’s woes but getting involved themselves — they are taking on the political system in Lebanon. 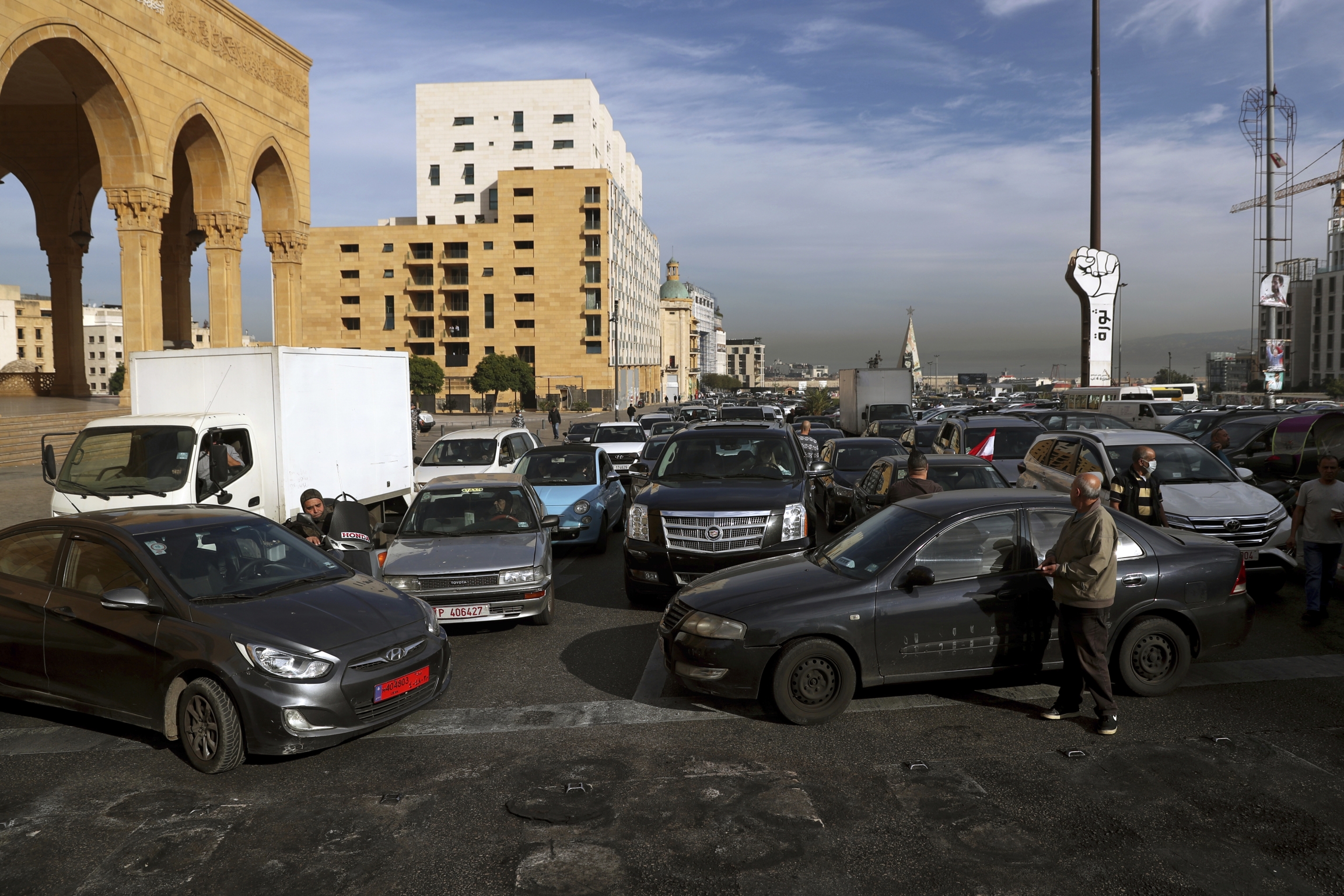 Taxi drivers block a road with their vehicles during a protest against the increasing prices of gasoline, consumer goods and the crash of the local currency, at Martyrs' Square, in downtown Beirut, Nov. 30, 2021.

Achi helped start a new youth-led political group called Minteshreen that is pushing for a secular state and a different social contract that’s not based on sectarianism.

Lebanon’s political system is based on sectarian power sharing among different groups.

Under this system, the three key government positions of president, prime minister and speaker are divided between a Maronite Christian, a Sunni Muslim, and a Shiite Muslim.

Rania al-Masri, a political activist and lecturer at the Lebanese American University, said the origins of this system in Lebanon go as far back as the French and British colonial period prior to its independence in 1943.

“They saw us as an amalgamation of 17, 18 different sectarian affiliations that they want us to coexist peacefully, which could not be more insulting and [ahistorical] to how we are,” she said. 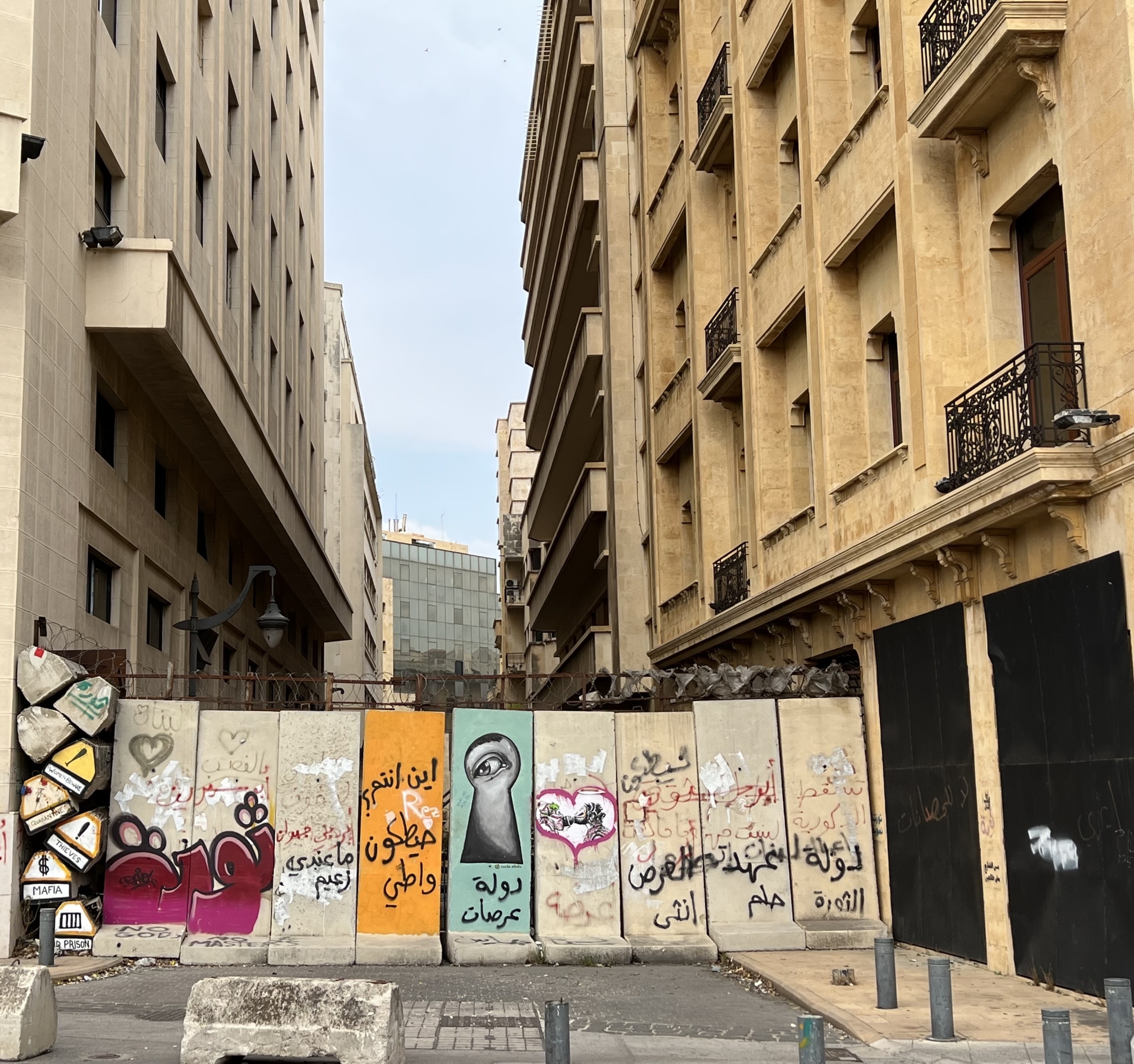 Some streets in Beirut have been barricaded by blast walls. Protesters use them as a canvas for anti-government graffiti.

The way she sees it, the sectarian system denies the Lebanese people a shared identity: It boxes them into the different sects into which they were born.

Instead of focusing on national priorities, she explained, politicians look out for people in their own groups. They divvy up government jobs and funding not based on merit but on political and sectarian allegiance.

“Imagine in the United States, if I want to say the number of people with green eyes get to have these public positions and the number of people with brown eyes get to have those public positions, and let’s see if green eyes and blue eyes and brown eyes can coexist together,” she said. “And if you hear how absurd that is for you, that is how absurd it is for me to talk about Druze and Maronites and Greek Orthodox coexisting when they are literally members of my same family.”

Masri and Achi are both members of a younger generation in Lebanon that’s looking for an end to the old sectarian-based political rules. They say this is the only way that the country can pull itself out of the current chaos.

But untangling an old system that is embedded in so much of everyday life in Lebanon and one that benefits powerful individuals is not so easy.

Masri’s party, called “Citizens in a State,” was established in 2016, but she said it has been getting lots of new members since the 2019 protests, including some who have left their sectarian political parties.

Citizens in a State, she added, wants “a negotiated settlement for a transitory power,” a government that has ministers with legislative powers, and then a nationwide election.

They see the power in the local syndicates or alliances of professionals such as doctors, lawyers and dentists.

“This group of organized individuals have lost all their money because they kept their money in the banks and so now, they have the power of negotiating and we are working to organize them.”

“This group of organized individuals have lost all their money because they kept their money in the banks and so now, they have the power of negotiating and we are working to organize them,” Masri said.

(Lebanon is facing a banking crisis and its banks are largely insolvent). 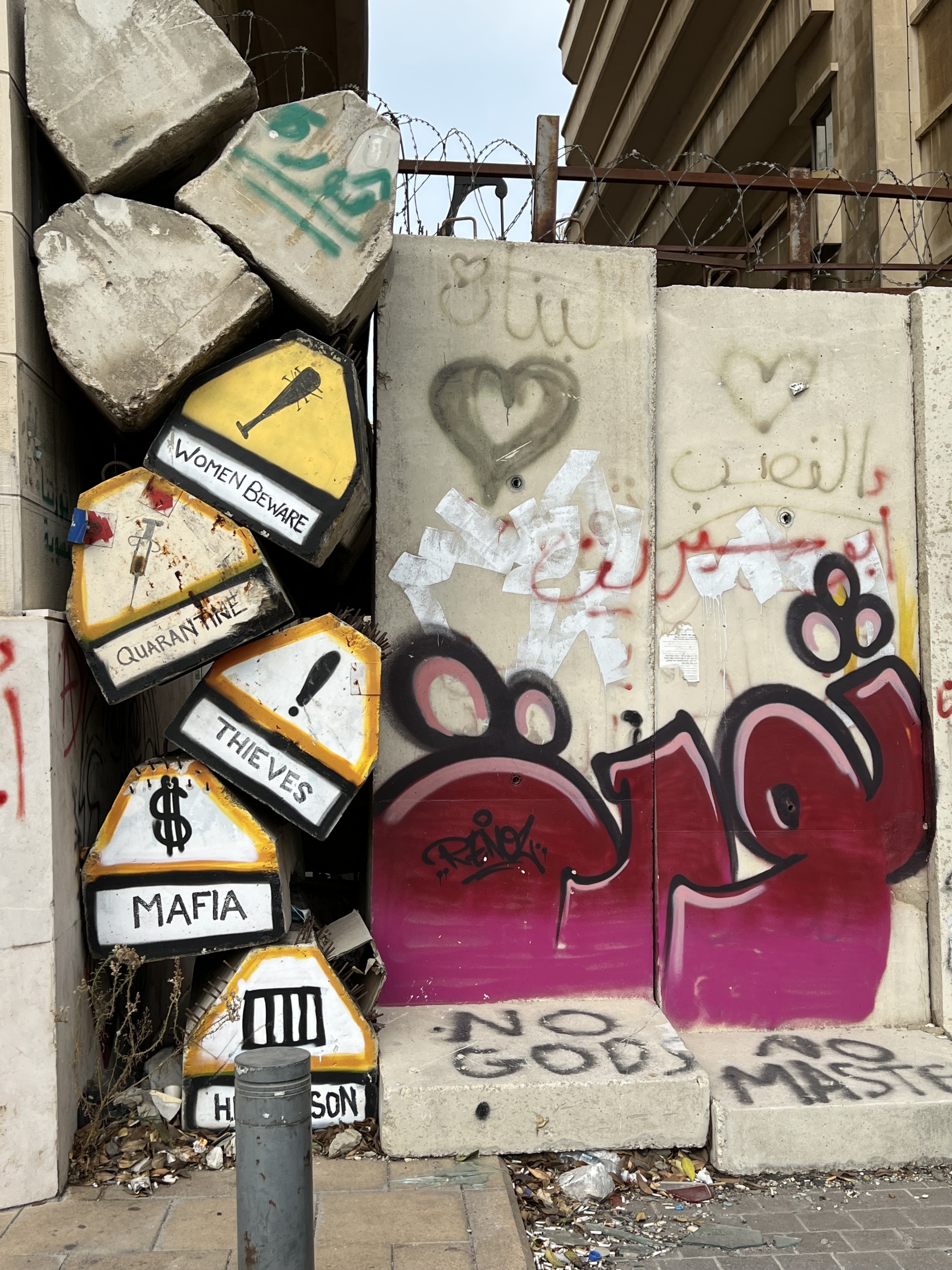 Graffiti from the 2019 protests in Beirut reads “Revolution.”

Achi’s Minteshreen sees a way out of the sectarian power-sharing system by taking advantage of elements in the Taif agreement, which was signed in 1989 at the end of the Lebanese civil war.

Achi said that Minteshreen has had some success with the student elections and syndicates. But he is also realistic about the challenges ahead.

They face resistance from the older generation and those living outside of major urban centers, where the political sectarian parties have a strong hold on the communities.

Still, both of these Lebanese activists are convinced that the only way forward for their country is to build a new system that is not rooted in sectarian competition.

“At the end of the day, we want to reach a true secular state and we want a new social contract based on secularism,” Achi said.

Sectarian political tensions came to a head in October when gunfire broke out in the Tayyoune neighborhood of Beirut, between supporters of the Shiite Hezbollah and Amal party and those believed to be with the Christian Lebanese Forces party.

Details of what exactly took place remain murky but at least six people died and several were injured.

Recently, signs from the fighting were visible here. One multiple-story building had dozens of bullet holes and broken windows.

This part of town is mostly segregated. Shiite Muslims live on one side, Christians on the other. It’s a painful legacy of Lebanon’s 15-year civil war that started in 1975, when this city was divided between mainly Muslim and Christian neighborhoods.

A demarcation line ran through this part of the city. Today, smaller wars and flare-ups continue.

Not only that, in the absence of a functioning state in Lebanon, many people rely on sectarian groups for basic services, said Lea Bou Khater, who has researched labor movements. That makes rejecting the system more complicated.

Lebanon is scheduled to hold an election next year. But activists Achi and Masri say they are not counting on elections to bring real change.