Food blogger Joanne Lee Molinaro speaks with The World's host Marco Werman about her cooking, social media success and the personal stories behind the experience.

One of Joanne Lee Molinaro's recipes from "The Korean Vegan Cookbook: Reflections and Recipes from Omma's Kitchen."

Food blogger Joanne Lee Molinaro, known as The Korean Vegan, has 4 million fans across her social media platforms, with 2.7 million of them following her on TikTok alone.

Her popularity doesn't just come from her numerous dishes on offer, but from the conversations she shares with her audience about important issues like race — recalling some of her own very personal stories — as she demonstrates her cooking. 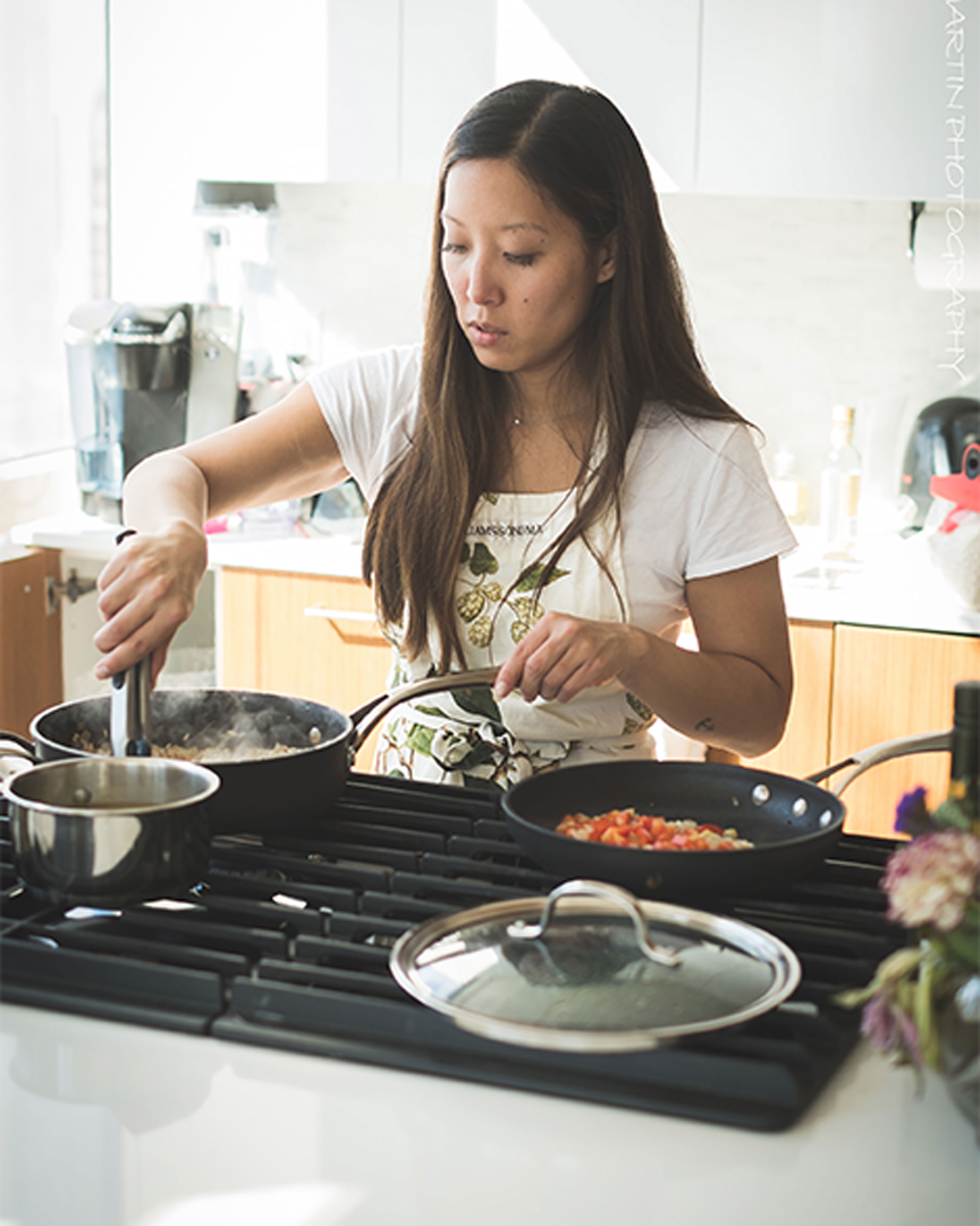 The World's host Marco Werman spoke with Molinaro from her home in Chicago about her experiences.

"Instead of taking you through a recipe, I shared my thoughts, I shared stories," she said. "I shared kind of my views on the political climate that was going on outside my window as well as the pandemic."

"My career right now is not at all what I thought it would be this time last year."

Molinaro had decided to go on a plant-based diet in 2016 and started a food blog about it. She was a lawyer at the time and says that the journey has been surreal.

"My career right now is not at all what I thought it would be this time last year, so I am absolutely astonished."

Her decision to become vegan took some adjusting.

"I grew up eating cuts of meat and pork. That used to be my favorite food. So, not getting to eat those things was, sure, a little bit hard. But much harder was sort of my grappling with my cultural identity. Who am I if I don't get to eat these things that I associate so much with my Koreanness? And navigating that path was much harder, but also ultimately far more fulfilling."

Molinaro has discussed challenges around race and being a Korean American. And she's shared deeply personal stories about her family — including about her grandmother, whom she describes as the strongest woman she's ever known — and things she learned about her father that brought her closer to him.

"My childhood was me viewing [my father] as the typical Korean dad, not affectionate, doesn't talk to me, only views me as a grade, you know, as a report card. That's the only time he ever talked to me."

"Seeing [my father] that way opened this door that I had previously ignored, and I'm so grateful that I have that now."

While cooking for her father, Molinaro decided to find out more about his story.

"His own father had been incredibly abusive with him. And perhaps a lot of the reason he's so withdrawn and aloof from everyone, not just me, is a defense mechanism and a coping mechanism for the pain that he has had to deal with his whole life. And seeing him that way opened this door that I had previously ignored, and I'm so grateful that I have that now."

Molinaro's own favorite dish is japchae, made with sweet potato glass noodles or vermicelli. It's the meal she asks her mother to make for her birthday every year, and she also serves it for Thanksgiving and Christmas.

"It's a delicious dish. It's absolutely beautiful. I mean, because it's so colorful. … It can be a little labor-intensive because you're supposed to saute and stir fry each of the vegetables separately, and so that's why it's a special occasion dish.

Related: In Japan, a 1,000-year-old cheese recipe makes its comeback

Molinaro shared her japchae recipe from her publication, "The Korean Vegan Cookbook: Reflections and Recipes from Omma's Kitchen," below.

Allergens: GFO (can be made gluten-free leaving out some ingredients), NF (nut-free diet)

Soak the sweet potato vermicelli in water for about 15 minutes.
In a pot of boiling water, cook the spinach until they turn bright green, about 2 minutes. Drain the spinach and run it under cold water to stop the cooking. Squeeze out as much excess liquid as possible and set it aside.
In a very large skillet, heat 1 tablespoon of the olive oil over medium-high heat. Add the carrot and sauté until they start to turn soft, about 2 minutes. Season with salt and pepper. Remove the carrots and place in a large bowl. Repeat with the red bell pepper, then the yellow bell pepper, and green bell pepper, followed by the red cabbage, seasoning each to taste with salt and pepper and adding to the bowl with the carrots. If necessary, add more oil to the pan as you go. The reason the vegetables are sautéed separately is to ensure that the flavors don’t muddle together. 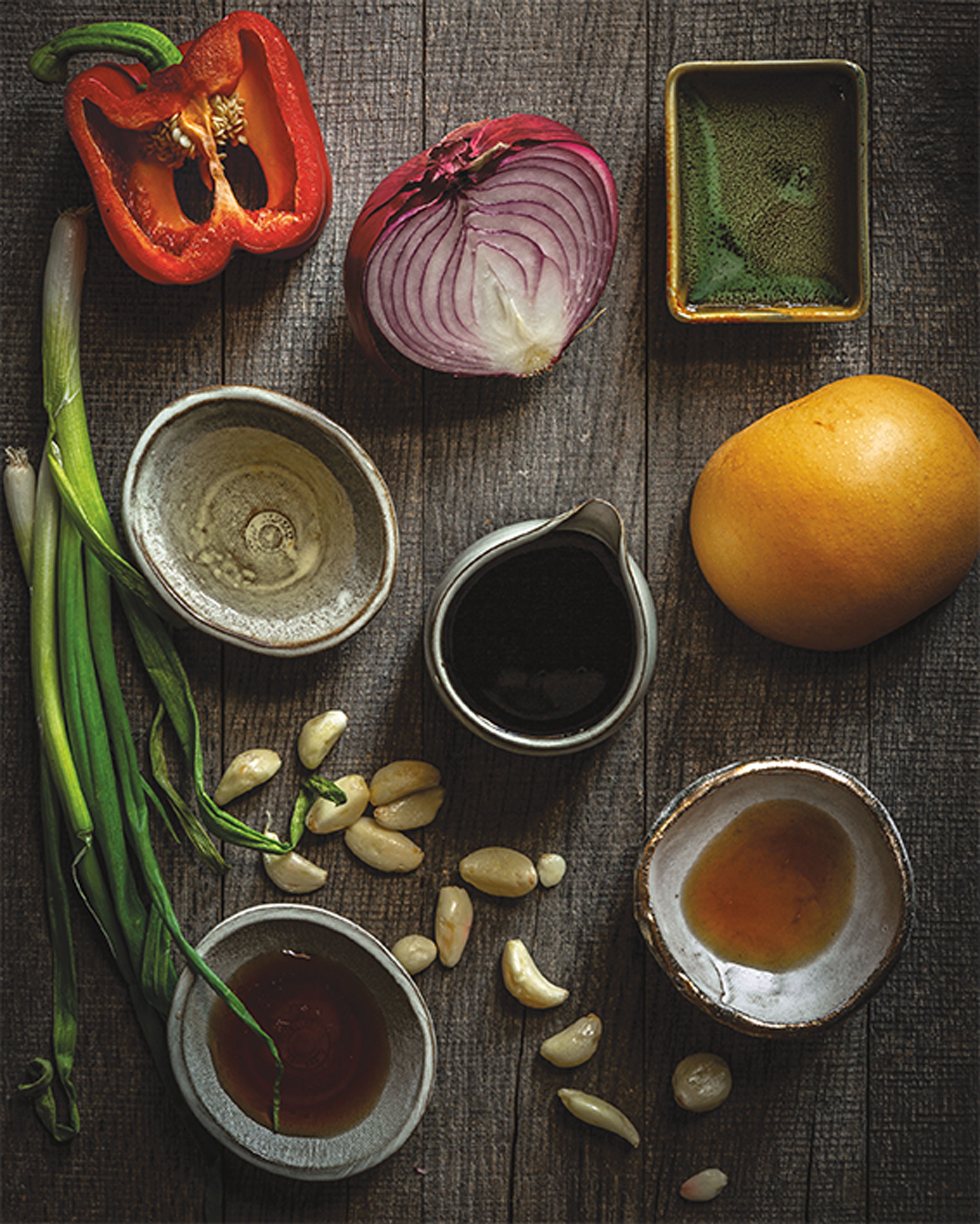 In the same pan, heat the remaining 1 tablespoon olive oil over medium-high heat. Add the onion, garlic, mushroom, and salt and pepper to taste and sauté until the mushrooms are browned, about 5 minutes. Add 1 tablespoon of the soy sauce and 1 tablespoon of the maple syrup to deglaze the pan. Transfer the onions, mushrooms, and garlic to the large bowl of vegetables.
Bring a large pot of water to a boil. Add the soaked vermicelli and cook them for 3 minutes. Add ½ cup cold water to the pot and when the water starts to boil again, add another ½ cup cold water. When the water comes to a boil, check the noodles to see if they are cooked (they should be tender and springy). If not, repeat.
Drain the cooked noodles and rinse them in very cold water. Shake off the excess water and add the noodles to the bowl of vegetables.
Add the remaining 2 tablespoons soy sauce and the remaining 1 tablespoon maple syrup along with the sesame oil, a dash of black pepper, and the sesame seeds.
Mix using chopsticks or your hands. Taste and add additional soy sauce, maple syrup (I like mine sweet!), or black pepper, if desired. 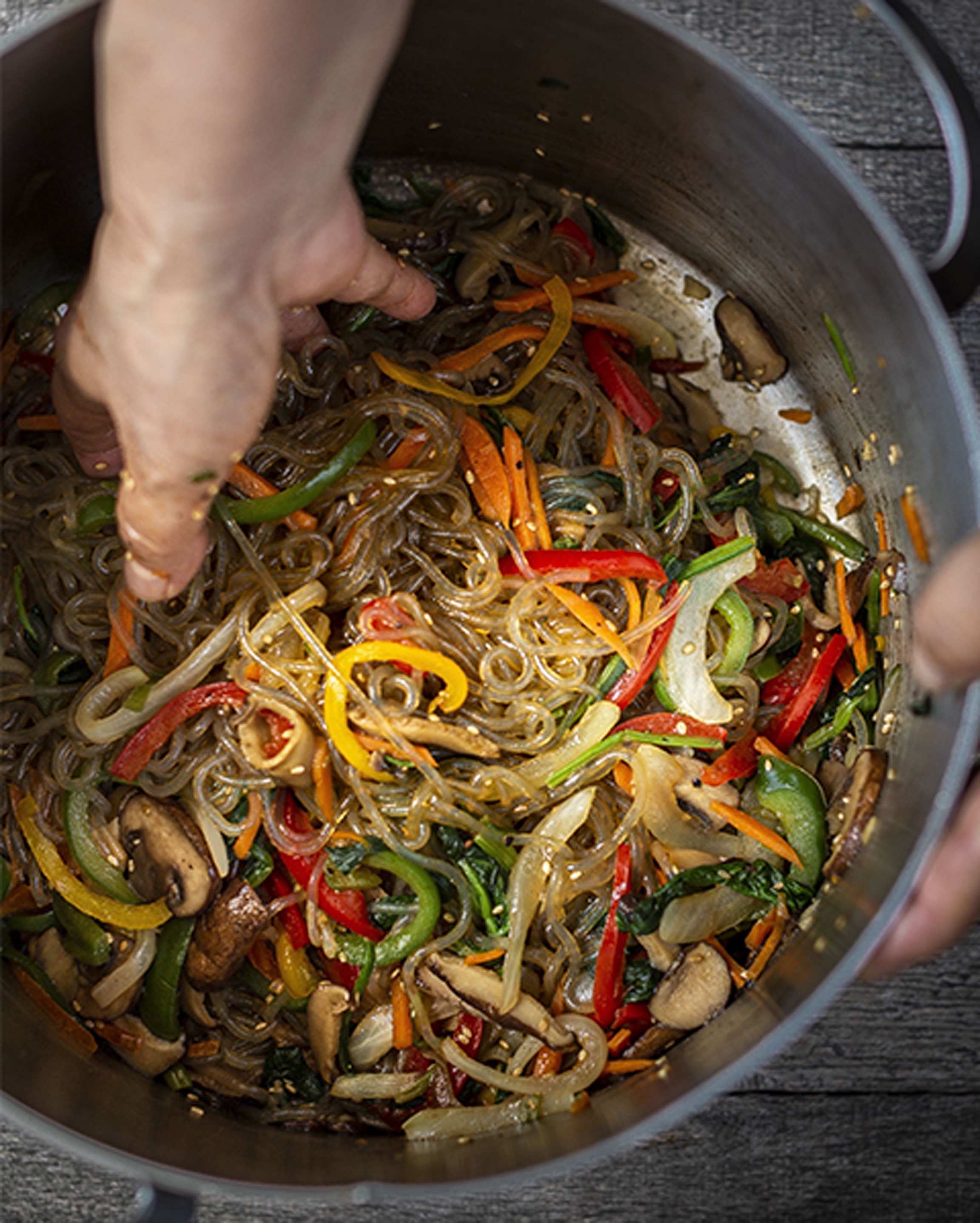