class=”MuiTypography-root-135 MuiTypography-h1-140″>‘The best is yet to come': Thousands of Bulgarians return home during pandemic

Since 1989, hundreds of thousands of Bulgarians have left the country, looking for better job prospects and wages. But in 2020, emigration decreased dramatically while the number of returnees soared. Leaders hope they’ll stay and help build Bulgaria’s future.

A man passes by a wall displaying an urban art project in the Transylvanian town of Sibiu, Romania, May 8, 2019.

Paskal Zhelezov was just 15 when his family moved from Burgas, on the Black Sea Coast, to North Carolina, in the US, in 2007. His father applied for a green card every year for over a decade.

His parents saw opportunities in the US that they couldn’t see in Bulgaria back then, he said.

“Bulgaria was not the most attractive spot and did not have much to offer after the end of communism in 1989."

Paskal Zhelezov returned to Bulgaria in 2020, after 13 years in the US

“Bulgaria was not the most attractive spot and did not have much to offer after the end of communism in 1989. They were looking for a change, not only economically, but also on the social side of things.”

Related: Roma persecution intensifies during the coronavirus pandemic in Europe

Since 1989, hundreds of thousands of  Bulgarians have left the country and headed to Western Europe looking for better job prospects and wages. But in 2020, emigration numbers dropped dramatically, while those returning soared. Newly elected Prime Minister Kiril Petkov is hoping that with a strong anti-corruption message and promise of speedy economic growth, those returnees will stay put.

After 13 years in the US, Zhelezov moved back home in May 2020, during the first wave of the COVID-19 pandemic. He’s one of several thousand Bulgarians who returned home in 2020, reversing the migration trend for the Eastern European country.

Zhelezov’s family thrived in the US. His mother is now an academic adviser at the University of North Carolina at Chapel Hill and his father works for the American Red Cross. Zhelezov graduated from North Carolina State and, in 2017, moved to San Francisco to work with a business travel start-up.

But the pandemic hit the company hard and it soon began to let workers go.

Zhelezov was offered a job by another start-up, Omnipresent, a group that helps companies employ remote workers abroad while ensuring compliance with local tax systems. With no fixed office, Omnipresent told Zhelezov he could base himself anywhere. He chose Bulgaria.

Zhelezov said even after 13 years in the US, he never felt fully at home.

“I just never really felt like an American who wants to live the American lifestyle. Bulgaria was always home,” he said.

Related: ‘I had no life left here’: Iraqi Kurds are at the center of the migration crisis in Europe

Bulgaria is the poorest country in the European Union. Transparency International has also ranked it the most corrupt on the continent. In 2019, the United Nations Population Division reported that Bulgaria was projected to be the second-fastest shrinking country in the world, behind Lithuania.

Exact data on the numbers of people who returned to Bulgaria in 2020 is not available. However, the European Council on Foreign Relations (ECFR) estimates that about 30,000 more people moved back to the country than left that year.

Related: ‘Strangers in their own land’: Iraqi Yazidis and their plight, 7 years on from genocide

Ognyan Georgiev, visiting fellow with the ECFR who researched the data, spoke with many of the new returnees. Job loss was a big reason why many returned, but a significant number also moved back because they felt safer being home with their families during the pandemic, he said.

“The two reasons [returnees] gave me was they were either left without a job or they were fearing for their security. I mean their health security, you know, they just felt more secure being back, being there with their parents, family or whatever.”

“The two reasons they gave me was they were either left without a job or they were fearing for their security. I mean their health security, you know, they just felt more secure being back, being there with their parents, family or whatever.”

Atanas Pekanov returned to Sofia, the capital of Bulgaria, from Austria, in 2021.

Pekanov, an economist with the Austrian Institute for Economic Research, was offered the position of deputy prime minister with Bulgaria’s caretaker government.

For much of the last 12 years, Bulgaria has been ruled by conservative leader Boyko Borisov, until his resignation in April 2021.

Pekanov’s interim cabinet ran the country for seven months, while Bulgarians went to the polls three times to elect a new government.

In December 2021, Kiril Petkov, co-founder of the anti-corruption party We Continue The Change (PP), was appointed prime minister.

Petkov, along with party co-founder Assen Vassilev, are known as “The Harvards" — both men were educated at Harvard Business School and went on to become successful entrepreneurs. 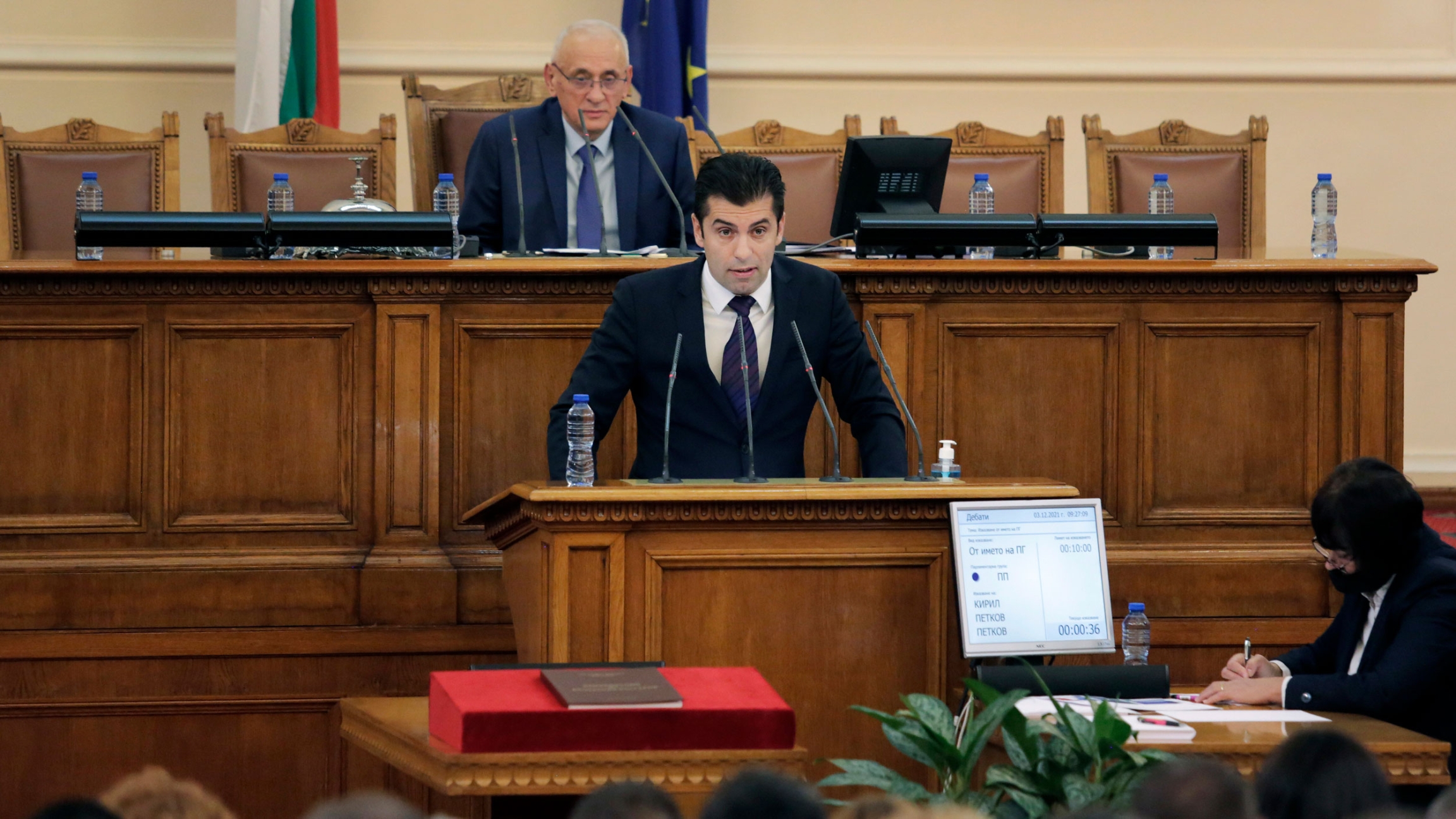 Kiril Petkov, co-leader of the We Continue the Change party, speaks during the first session of the new Bulgarian Parliament, Sofia, Friday, Dec. 3, 2021.

“I think people are really now hopeful that things can change, but I always say that it's going to take a while. In the past decade, we neglected a lot of problems that we have and now we have to face them head on, but it will take time."

“I think people are really now hopeful that things can change, but I always say that it's going to take a while. In the past decade, we neglected a lot of problems that we have and now we have to face them head on, but it will take time,” Pekanov said.

Many of Pekanov’s friends moved back to Bulgaria during the pandemic, too, but he said he’s not sure how many will stay. He figures that decision probably lies with their employers. Many work remotely for companies based in Western Europe that may soon decide to ask their staff to return onsite.

Pekanov said he hopes some will stay and use the skills they’ve learned abroad to bolster the Bulgarian economy. But even he admitted he cannot say for certain if he will remain long-term.

Petar Cholakov, associate professor with the Institute of Sociology at the Bulgarian Academy of Sciences, said job prospects in Bulgaria are quite good. The national unemployment rate is at just 4.6%, but wages are also low compared to many Western European nations.

Cholakov said he has heard a lot of talk about this renewed sense of hope in Bulgaria, but he said he is not yet convinced. He pointed out that voter turnout at the last election in November 2021 was just 40%, meaning 60% of the population lacked motivation to go to the polls.

The new coalition government is made up of four political parties with very different ideals. Prime Minister Petkov’s anti-corruption party has teamed up with the leftist socialists, the populist There is Such a People (ITN) party and the center-right Democratic Bulgaria party.

Cholakov predicts plenty of disagreements ahead, but the coalition might work if only because citizens are weary to hold another election. 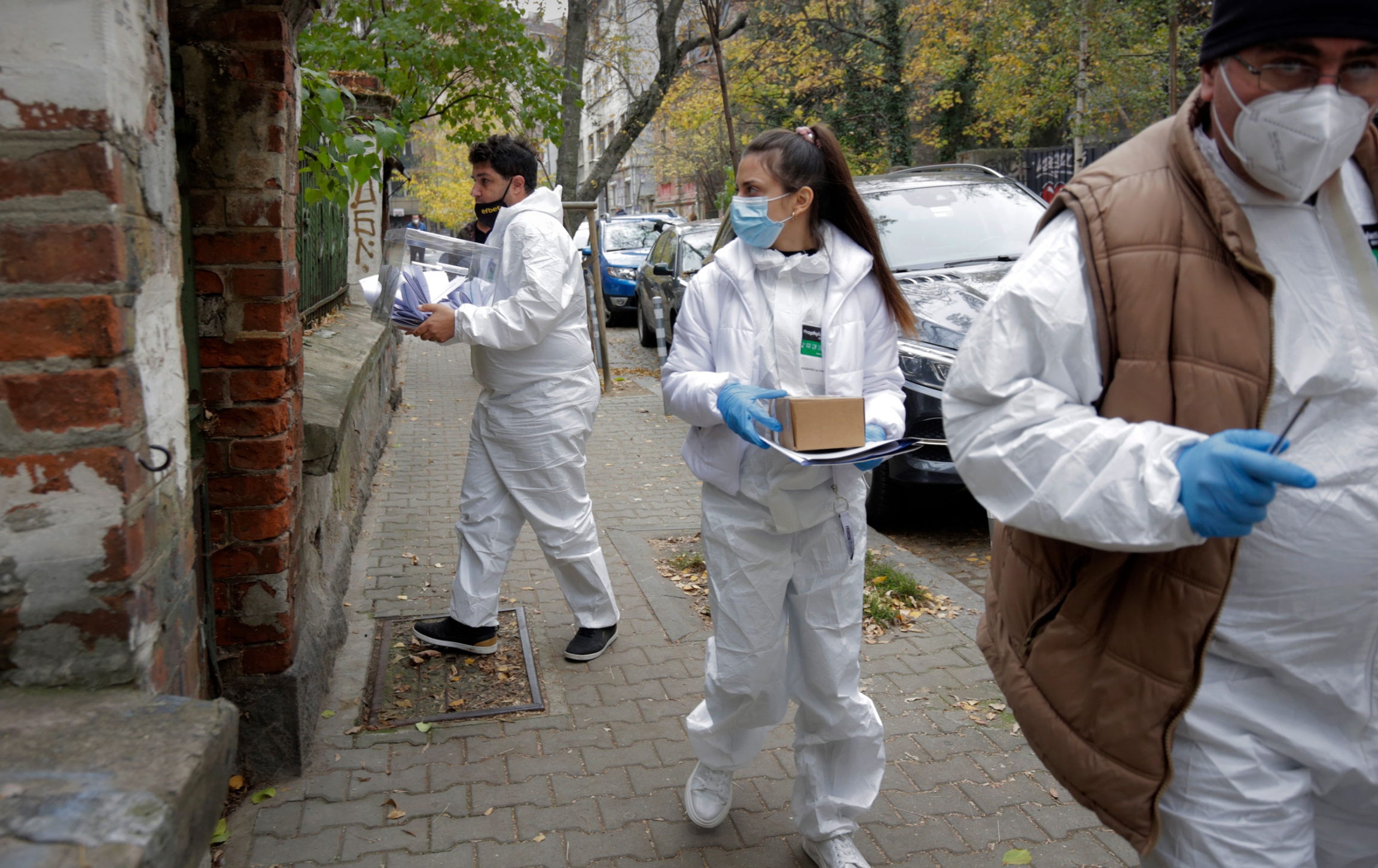 Election officers dressed in protective gear to protect from COVID-19 go to the addresses of sick people to allow them to cast their votes, in Sofia, Sunday, Nov. 14, 2021.

Prime Minister Petkov has vowed to tackle corruption head on, but the pandemic will likely have to be his top priority, said Ognyan Georgiev with the European Council on Foreign Relations.

The omicron variant was detected in the country just a little over a week ago, but it’s spreading fast. Bulgaria has the lowest vaccination rate in all of the EU with less than 30% fully vaccinated. On Tuesday, a senior health official announced that the Bulgarian prime minister, the president and several senior ministers have all gone into self-isolation after coming into close contact with someone who tested positive the previous day.

Back home in Bulgaria, Zhelezov said he’s planning to stay for the long haul.

“We have pretty beaches, nice weather most of the time and a developing economy,” he said. Besides, he’s keen to see if this new government will live up to its campaign promises, he said.

A man is flies his kite during the First Varvara Kite Fest in the village of Varvara on Bulgarian Black Sea coast, Friday, Aug. 27, 2021.

A recent Gallup poll found Bulgarians to be among the most pessimistic people in the world. But Zhelezov is not one of them.

“I'm convinced that we're changing for the better and the best is yet to come.”