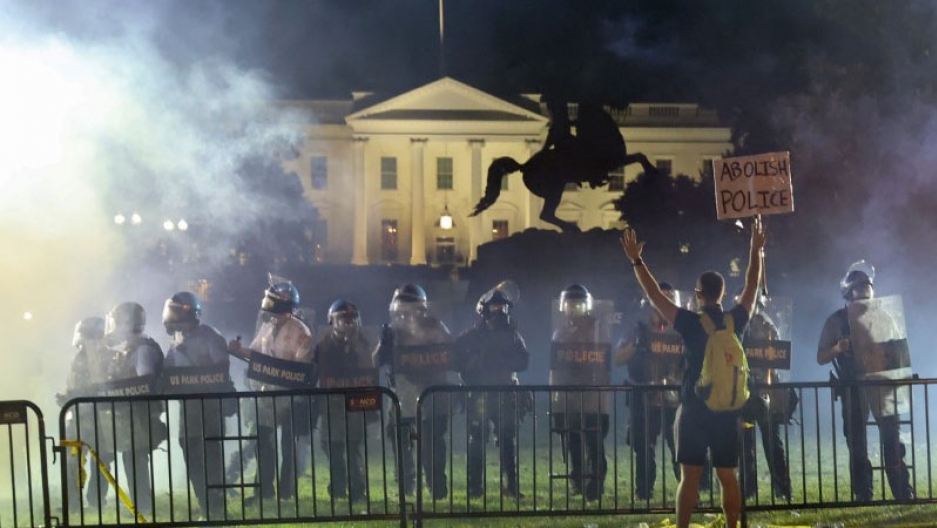 Police in riot gear keep protesters at bay in Lafayette Park near the White House in Washington, DC, May 31, 2020.

Protests, curfews and aggressive police crackdowns have followed outrage over the police killing of George Floyd, a black man, in Minneapolis, Minnesota. Protesters and journalists have been fired upon with munitions, and US President Donald Trump has called on the military to step in — a move that has been decried by some prominent figures, including former Secretary of Defense Jim Mattis.

But what’s happening on US streets right now looks familiar to veterans of the US intelligence community who’ve monitored foreign government responses to social unrest.

Some are pointing out parallels between Trump’s attempts to quell protests, and the actions of authoritarian regimes that have done the same.

Gail Helt is a former CIA analyst who tracked developments in China and Southeast Asia and a professor of security and intelligence studies at King University in Tennessee. She spoke with The World’s Marco Werman about the similarities between what’s happening in the US and government repression in other parts of the world.

Marco Werman: Gail, peaceful protests across the US, but as you see the massive police presence, the use of tear gas, mass arrests, what similarities are you spotting to repression in other parts of the world that you’ve seen in the past?

Gail Helt: I have to say — I think I would be remiss if I didn’t, this being the 31st anniversary of the Tiananmen Square massacre — and seeing those armored vehicles rolling down the streets of DC does kind of conjure those images, in my mind, of tanks running over peaceful protesters. And I know that might seem like an extreme comparison to some people. But in my opinion, that’s how unusual it is to see armored vehicles being used as crowd control on the streets of American cities.

Are there differences that you would underscore?

I definitely don’t see, or at least I’m hopeful that we won’t see, any kind of repression along those lines here. America is a democracy. America is a republic. We are not supposed to use our military to corral peaceful protesters. And yes, there are some pockets of violence, and that’s horrible. We can handle this. I think that there’s been a ratcheting up of tensions. That concerns me a lot. But we in America have a tradition of peaceful protest. It is a constitutional right. And I think using the military to crack down on that sends a horrible, horrible message about where we’re headed as a country.

President Trump’s former attorney, Michael Cohen, said last year in congressional testimony, “Given my experience working for Mr. Trump, I fear that if he loses the election in 2020, that there will never be a peaceful transition of power.” He’s making the case that Trump losing would be the same as a strong man in a country with a weak democracy. It happens all over the world. Where have you seen this play out? And do you see this happening here in the US?

Well, I am concerned. Trump has been setting the stage, at least for American citizens to question the legitimacy of the upcoming presidential election, for months. When he talks about how mail-in ballots are tantamount to election fraud, we’re on dangerous ground here. If Trump loses in November, I do think he will leave. I don’t think he will leave without a lot of drama, without a lot of protests, without him organizing marches in the streets of Washington, DC.

Gail, I’d like to get back to Trump’s reliance on law and order. Earlier this week, he called on governors to “dominate the streets” or else he would deploy the United States military and “quickly solve the problem for them.” The way to do this is through the Insurrection Act, which allows the use of active-duty military forces to deal with unrest in US streets. But Defense Secretary Mark Esper has said he’s opposed to invoking the act: “The option to use active-duty forces in a law enforcement role should only be used as a matter of last resort and only in the most urgent and dire of situations. We are not in one of those situations now.”What does it mean for any leader to turn the military against citizens? I mean, do you have an example of that? If Trump did it, can you argue that he’s becoming as authoritarian as Bashar al-Assad, for example?

I do think that that is an extreme comparison. I would look at maybe Malaysia in 2012, 2013, when there were pro-democracy, pro-electoral reform protests and the government, which had no interest in electoral reform, pulled out the rubber bullets and the water cannon and the tear gas. It’s a breach of trust. If that happens here in any large-scale way, I think that the breach of trust is going to be something that’s irreparable. And we already have a huge distrust issue with American citizens. And this has been happening for decades. I mean, you can’t pin that all on Trump. The fabric of our society has been fraying a little bit for a couple of decades now. But Trump has just basically pulled those threads and totally unraveled it.

Given what you’ve witnessed in other countries that you’ve paid close attention to over the years, how worried are you personally for the US? What are you telling students at King University right now?

I’m very worried. I’ve used the word terrified. I don’t believe that if Trump is reelected that we can withstand four more years. The Constitution — nobody’s defending it. I mean, I’m defending it, there’s many of us, there are dozens of us who are former national security professionals who are out there defending it and trying to remind our elected officials of the oath that they took, just like the ones that I took, to protect and defend the Constitution against all enemies, foreign and domestic. And they’re not actually doing that. To me, in my mind, until they do that, anything can happen.