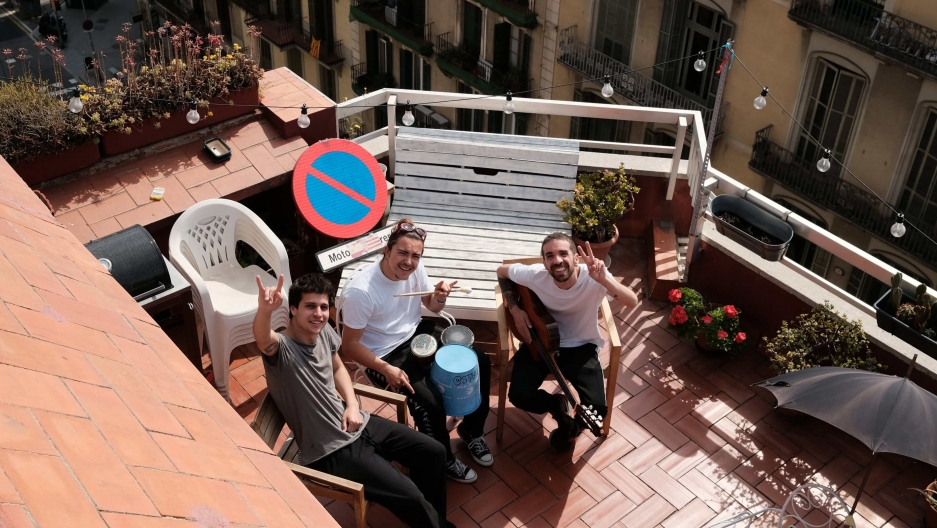 Stay Homas, a band of three roommate musicians in Barcelona, Spain, perform songs from their rooftop to get us through our COVID-19 “confinement blues.”

Spain is one of the countries hardest hit by COVID-19, with the second-highest number of cases after the United States. In recent weeks, the daily fatality rate and the number of new infections have been decreasing, and the Spanish government announced a de-escalation plan of its quarantine measures expected to last through the end of June, if not longer.

Until then, people continue to be confined at home, with few chances to get out: They can only leave to buy food, walk the dog, go to work, or — starting May 2 — do outdoor exercise.

But for the past six weeks, three musician roommates in Barcelona have been getting people through their confinement blues through originally written songs about the pandemic.

Related: Artists flock to the only ‘festival’ still on during COVID-19

They became an overnight sensation with a reggae-style song urging people to stay home that one band member posted on his Instagram on March 15, just one day after the Spanish government announced a state of emergency and imposed the lockdown. Within hours, the song had thousands of views.

Reposting our 2nd song from last week! It’s crazy how far this has arrived! STAY HOMA❤️

“People kept asking for more,” said Rai Benet, one member of the trio. “And we thought, why not? We have nothing else to do.”

He and his two roommates — Klaus Stroink and Guillem Boltó — were already musicians playing in other bands, but with the global crisis, they were left without jobs.

Benet says they wrote these songs to pass the time at first, propped up in their apartment terrace and drinking beers under the Mediterranean sun. But when they saw they were a hit, they kept going. Within a week, they had a name for the new band – Stay Homas — as well as their own Instagram and YouTube channels.

Now, after six weeks and 24 songs, they have hundreds of thousands of followers from all over the world.

“It was sort of strange,” said Benet. “Because we didn’t have any kind of intention with this. And suddenly, we saw that what we had created was growing quickly. It caught us off guard.”

They post a new song roughly every other day, sometimes doing collaborations with other artists through videos. Their songs are in Spanish, English and the regional language of Catalan, and they talk about things like life under quarantine, missing a loved one or taking care of the community.

“We want our lyrics to be socially conscious, whether it’s at an individual or global level. … Sometimes we do it through humor, but the goal is to make more than just music. We want people to reflect, especially during these times.”

“We want our lyrics to be socially conscious, whether it’s at an individual or global level,” said Boltó. “Sometimes we do it through humor, but the goal is to make more than just music. We want people to reflect, especially during these times.”

Their songs incorporate a range of genres: from trap to flamenco to pop. Canadian singer Michael Bublé even covered one of their songs.

“They asked us for the rights of that song,” said Stroink of their experience with Bublé’s manager. “And that’s when we realized we didn’t have any of our songs copywritten. They were in this legal gray zone that is Instagram.”

That’s when the group finally registered their songs and hired a manager. It was uncharted territory for them — they had never had to deal with the bureaucracy of the music industry, they said, and they were forced to figure it out in only a few weeks’ time.

The newfound fame is exciting and they say they’ve never been busier. Their days are filled with either songwriting — thinking up topics and melodies and lyrics — or interviews. On the day they spoke with The World, they said they had six interviews lined up, with publications from China and Russia.

And as the gradual easing of the lockdown begins in the coming weeks, the three bandmates are already looking forward to what comes next.

“We’ll continue writing songs as Stay Homas,” says Boltó. “Although, I assume, we’ll do it with less frequency and talk about things other than the pandemic.”