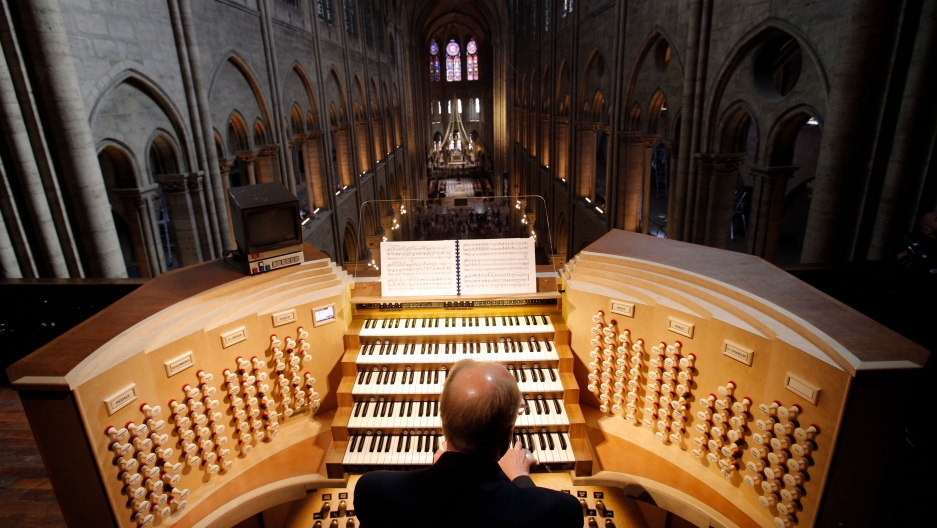 Philippe Lefebvre plays the organ at Notre Dame cathedral in Paris, May 2, 2013. Pipe by precious pipe, the organ that once thundered through fire-ravaged Notre Dame Cathedral is being taken apart. The mammoth task of dismantling, cleaning and re-assembling France’s largest musical instrument started Monday Aug. 3, 2020 and is expected to last nearly four years.

How researchers hope to restore the unique sound of Notre Dame

An acoustic map of Notre Dame made before the fire could inform its reconstruction.

People listen to Notre Dame Cathedral’s great bell ringing — a mark of the building’s resilience one year after a devastating fire — during the coronavirus disease (COVID-19) outbreak in France, April 15, 2020.

Vincent Dubois, one of Notre Dame’s three official organists, was in Strasbourg when he learned that the cathedral in Paris had caught fire one year ago.

Related: No sign of arson in Notre-Dame blaze as nation grieves

“It’s like one of the closest members of your family, your husband or your partner, or your brother or sister, was burning beside you,” he recalled, “and there was nothing you could do.” He and his fellow organists assumed that the instrument — parts of which date to the 18th century — was lost. He learned it had survived by text message at around 6 a.m. the next morning.

The French government, which owns the cathedral, has pledged to reconstruct it. But Notre Dame was not just a landmark building; it was a concert hall with a unique sound, even among cathedrals, according to Dubois.

Related: Notre-Dame remembered as a gathering point for The World

“The resonance is unlike anywhere else. It’s both precise while at the same time, lasting in the way the sound reverberates,” Dubois said.

Acoustics researcher Brian Katz could hear that difference when he was able to enter Notre Dame last July. Sunlight streamed through the now open roof.

“The fact that there’s these holes in the roof, the reverberation time has dropped significantly, so you don’t feel like you’re walking into a cathedral acoustically anymore,” he said.

But Katz has an acoustic map of Notre Dame that was made by his research team at the National Center for Scientific Research at the Sorbonne University in Paris. After the fire last April, he realized these sound measurements could inform Notre Dame’s reconstruction.

“The measurements that we did in 2013 were after [a] concert that we recorded. So it was, I think between 10 o’clock and midnight, or maybe one o’clock in the morning. … There were about 10 of us, moving microphones around.”

“The measurements that we did in 2013 were after [a] concert that we recorded. So, it was, I think between 10 o’clock and midnight, or maybe 1 o’clock in the morning,” Katz explained. There were about 10 of us moving microphones around.”

These measurements helped Katz and his team document how sound is transformed within the cathedral. Later analysis of the recordings allowed them to create a computer model of the cathedral’s acoustic landscape.

Together with a set of recordings the same lab made in the 1980s, these are the only measurements of the cathedral’s acoustics taken before the fire.

Intended as a proof of concept, Katz’s team used the recordings to create a virtual reality simulation that lets the user hear how the music of a concert is transformed while flying around Notre Dame on a magic carpet.

“It was not planned to be as important as it was — as it has turned out to be,” Katz said.

All cathedrals have lots of big, flat, reflective surfaces and even small modifications can change the resonance of the space, Katz said — it’s like changing a painting or cleaning the stone.

“Acoustics is an effect of the choices of all the other disciplines … the structural engineers and the stonemasons and the architectural finishes. All those choices of details are what creates the acoustics of a space,” Katz said.

With the measurements and the type of modeling software used to design concert halls, Katz hopes he can guide all the necessary choices in the restoration of Notre Dame that can add up to something that sounds like its original state.

“The earlier … acoustics is thought of and considered … the more integrated it can be in the design,” Katz said, “and important decisions can be made at the right time as opposed to later in the project, when it’s more difficult to change things.”

Katz’s team planned to take new measurements in the cathedral this spring with help from a robot to reach areas off-limits because of safety concerns. That trip got postponed when Paris shut down the site as part of the measures to counter the spread of the new coronavirus.

Even when the multiyear restoration effort is eventually completed, organist Dubois thinks it will take a few more years for Notre Dame to sound like it once did.

“It’s also the dust of the space, simply put. It’s a place in which there is so much foot traffic. There are many candles to be burned, so lots of soot, of which a little bit ends up all over everything.”

The only thing that can restore that, he thinks, is time — a short time, really, in the life of the centuries-old cathedral.