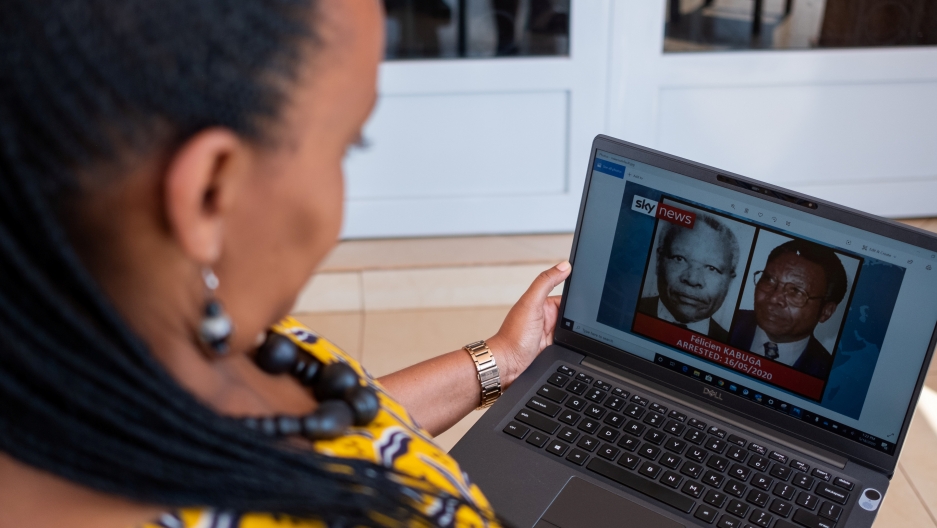 Dimitrie Sissi Mukanyiligira, a Rwandan genocide survivor looks at a laptop computer with the webpage showing the pictures of the Rwandan genocide fugitive Félicien Kabuga, as she takes part in a Reuters interview in Kigali, Rwanda, May 18, 2020.

The 26-year hunt for Félicien Kabuga —  spanning two continents and lasting more than two decades — has finally come to an end. On Saturday morning, French police arrested the now 84-year-old Rwandan genocide fugitive from his apartment in a suburb of Paris.

“Félicien Kabuga has always been one of the most wanted fugitives,” Serge Brammertz, chief prosecutor of the United Nations International Residual Mechanism for Criminal Tribunals (IRMCT), told The World in an interview Monday. “He has always been considered as being one of the masterminds in relation to the genocide.”

Related: Somali torture victim will face his abuser after 31 years — in US court

In 1997, Kabuga was indicted by the International Criminal Tribunal for Rwanda (ICTR) on seven counts of genocide and related crimes. His alleged role includes financing the 1994 genocide, arming militia groups, and heading a hate-filled radio station, Radio Télévision Mille Collines.

Genocide survivors such as Naphtal Ahishakiye, 46, still remember the words of hate on the radio. “Tutsi is the biggest enemy of Rwanda. Of Hutu. So the radio considered Tutsi as the animals, cockroaches,” he recalled hearing.

Ahishakiye is the executive secretary of Ibuka, a group for genocide survivors. Growing up as a Tutsi, he remembers the day-to-day discrimination by majority Hutu elites beginning long before 1994.

Related: Syrian officials on trial for war crimes in Germany

After spending 100 days hiding at neighbors’ homes and in the forest, only he and two sisters survived — the rest of his family died, including his parents, brothers and cousins, he said. At least 800,000 people are estimated to have been killed, the majority of them Tutsis.

While the ICTR officially concluded in 2015, ongoing cases were turned over to the IRMCT — now led by Brammertz — and continued to pursue Kabuga.

“We can never give up looking for those fugitives,” said Brammertz, speaking about the international community.

Previous attempts to capture Kabuga have failed, most notably a plot by the FBI and Kenyan authorities in 2003, which resulted in the death of an informant in Nairobi. The US has had a $5 million bounty on the fugitive.

Two years ago, Brammertz established a new task force to track down Kabuga in partnership with European authorities.

“We start[ed] where we were sure he was seen for the last time, which was in 2007 when he underwent surgery in Germany,” Brammertz said. He and his team began tracing Kabuga’s steps through Belgium and Luxembourg, identifying people who were likely to have helped him hide.

“Based on the analysis, phone profiles, financial information, we concluded two months ago that it was very likely that it was in a specific area in Paris,” Brammertz said.

“We are happy for France to facilitate this process to arrest Kabuga.  … In previous years, France didn’t play a role in this kind of justice.”

“We are happy for France to facilitate this process to arrest Kabuga,” Ahishakiye said. “In previous years, France didn’t play a role in this kind of justice.”

Indeed, the relationship between Rwanda and France has been strained by accusations that France was complicit in the genocide, an accusation it has historically denied. Last year, French President Emmanuel Macron directed a panel of experts to investigate France’s role in the genocide.

According to Brammertz, Kabuga will be transferred to the Mechanism Tribunal in Arusha, Tanzania, or The Hague, depending on travel restrictions that might exist due to the coronavirus pandemic.

When it comes to an actual trial, “it’s more likely that it takes closer to a year,” Brammertz said.