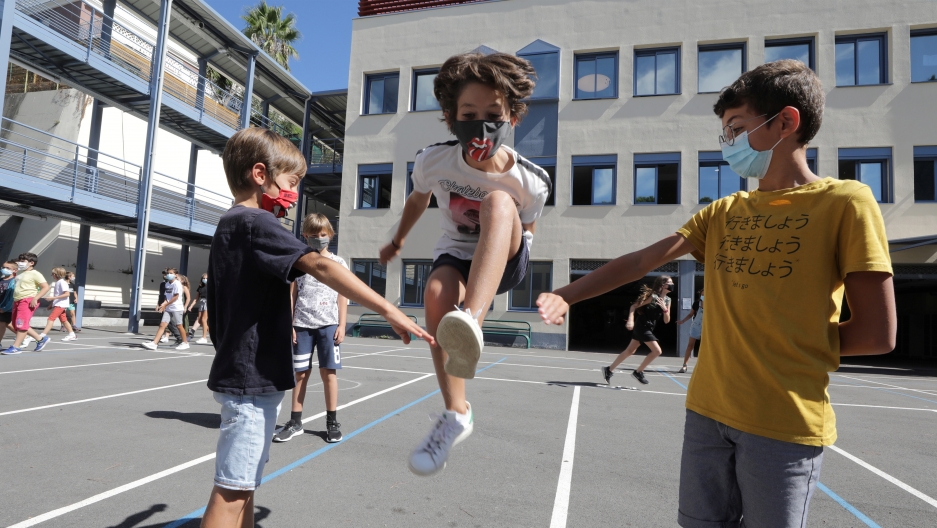 Secondary school students play in the courtyard at the College Henri Matisse school during its reopening in Nice as French children return to their schools after the summer break.

With summer break coming to an end, schools across Europe are reopening. Millions of school children returned to school on Tuesday, wearing masks but also eager to be acquainted with friends after a long hiatus. Many parents anxiously sent their previously home-bound pupils off to classrooms with more social distancing and sanitization than ever before.

In France alone, more than 12 million students headed back for mandatory in-person classes. First-day excitement carried more fear than usual, after the pandemic upended the previous academic year. “I know we are being careful,” said parent Jerome Continent in the Paris suburb of Roissy-en-Brie. “The children also have to live.” French authorities are reporting a bigger uptick in coronavirus infections than any neighboring countries. But officials are hoping that plastic shields around desks and omnipresent virus warning signs will stem the spread of COVID-19 among youth.

French schools can adapt in case of a surge in local coronavirus cases by limiting attendance for a few days or weeks and, in the event of a major regional outbreak, schools can close temporarily. The WHO warned Monday that though the virus remains a major threat, school closures have impacted children’s mental health and social development, particularly for those from low-income families, with disabilities or in an abusive home environment.

But experts say the risk depends on how widespread the coronavirus is in a community and what safety measures are taken.

Saudi Arabia’s King Salman has sacked the commander of his country’s troops in Yemen. A royal decree issued early on Tuesday and carried by Saudi state media referred Prince Fahd, also a member of the royal family, to an anti-corruption watchdog for a graft investigation. The intention, according to a letter from Crown Prince Mohammed bin Salman, was to probe “suspicious financial transactions at the defence ministry.”

Paul Rusesabagina, who helped hundreds of his countrymen survive the Rwandan genocide, was arrested on terror-related offenses, officials in Kigali announced on Monday. Rusesabagina was kidnapped while in Dubai, his daughter said. The good Samaritan has lived abroad for decades and became known as a regular critic of President Paul Kagame.

And French satirical magazine Charlie Hebdo is this week reprinting cartoons of the prophet Mohammed, just as accomplices in the 2015 attack on its office are due to begin trial on Wednesday. That massacre, led by Saïd and Chérif Kouachi, left a dozen people dead, including some of France’s most notable — and controversial — cartoonists.

From The WorldFive years after migrant crisis, integration in Germany is succeeding, policy analyst says 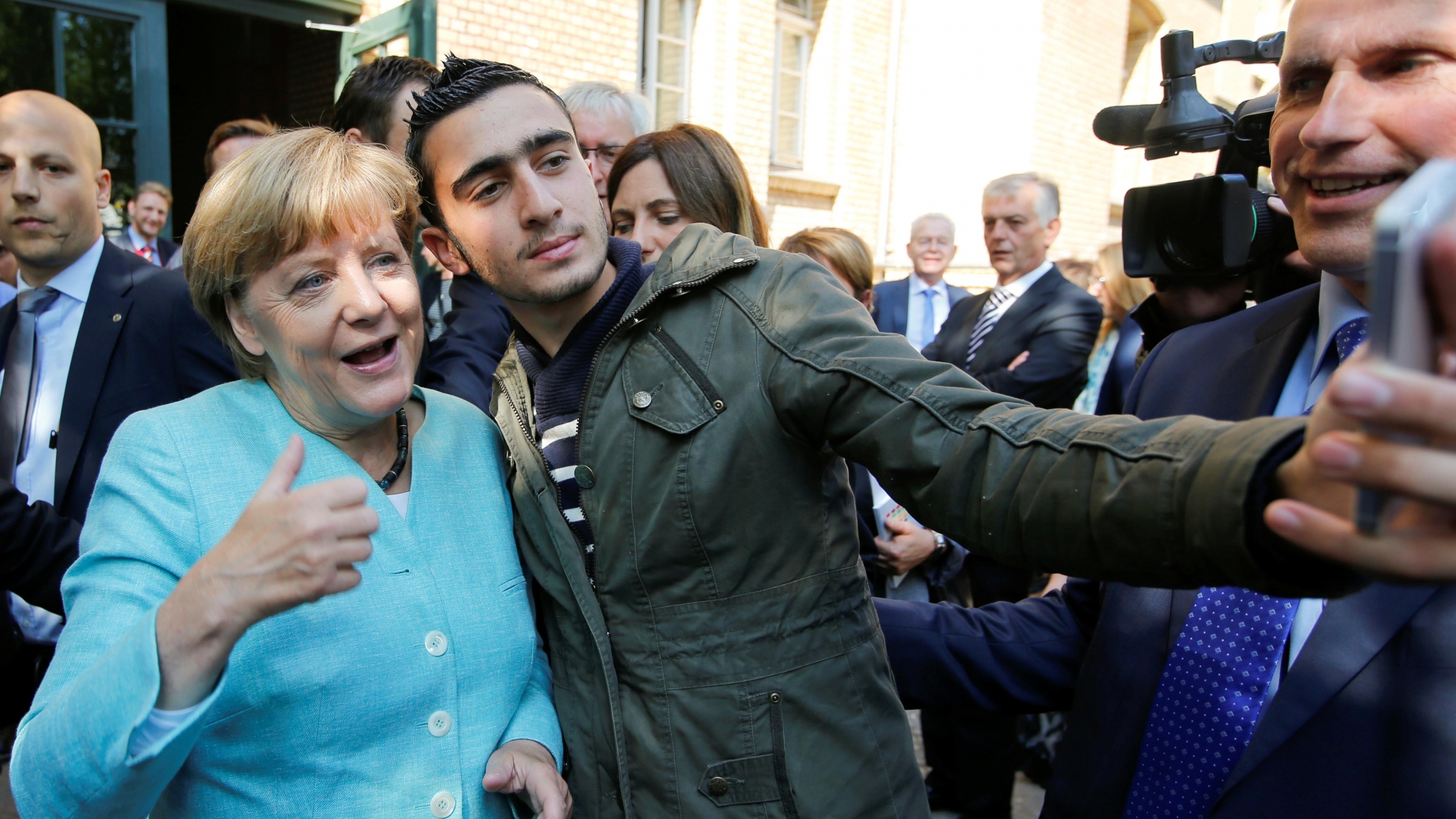 Syrian refugee Anas Modamani takes a selfie with German Chancellor Angela Merkel outside a refugee camp near the Federal Office for Migration and Refugees after registration at Berlin’s Spandau district, Germany, on September 10, 2015.

Five years ago, German chancellor Angela Merkel made what would become a famous speech in which she reiterated that migrants and refugees were welcome in Germany.

“I’ll put it simply: Germany is a strong country…we can do this,” she said. Critics said this statement, which triggered a groundswell of xenophobia, would be her undoing.

But many of her critics’ worst predictions on Europe’s migrant crisis have not come to pass, says Constanze Stelzenmüller, a senior fellow at the Brookings Institution.

It’s official: Women are better leaders in a pandemic 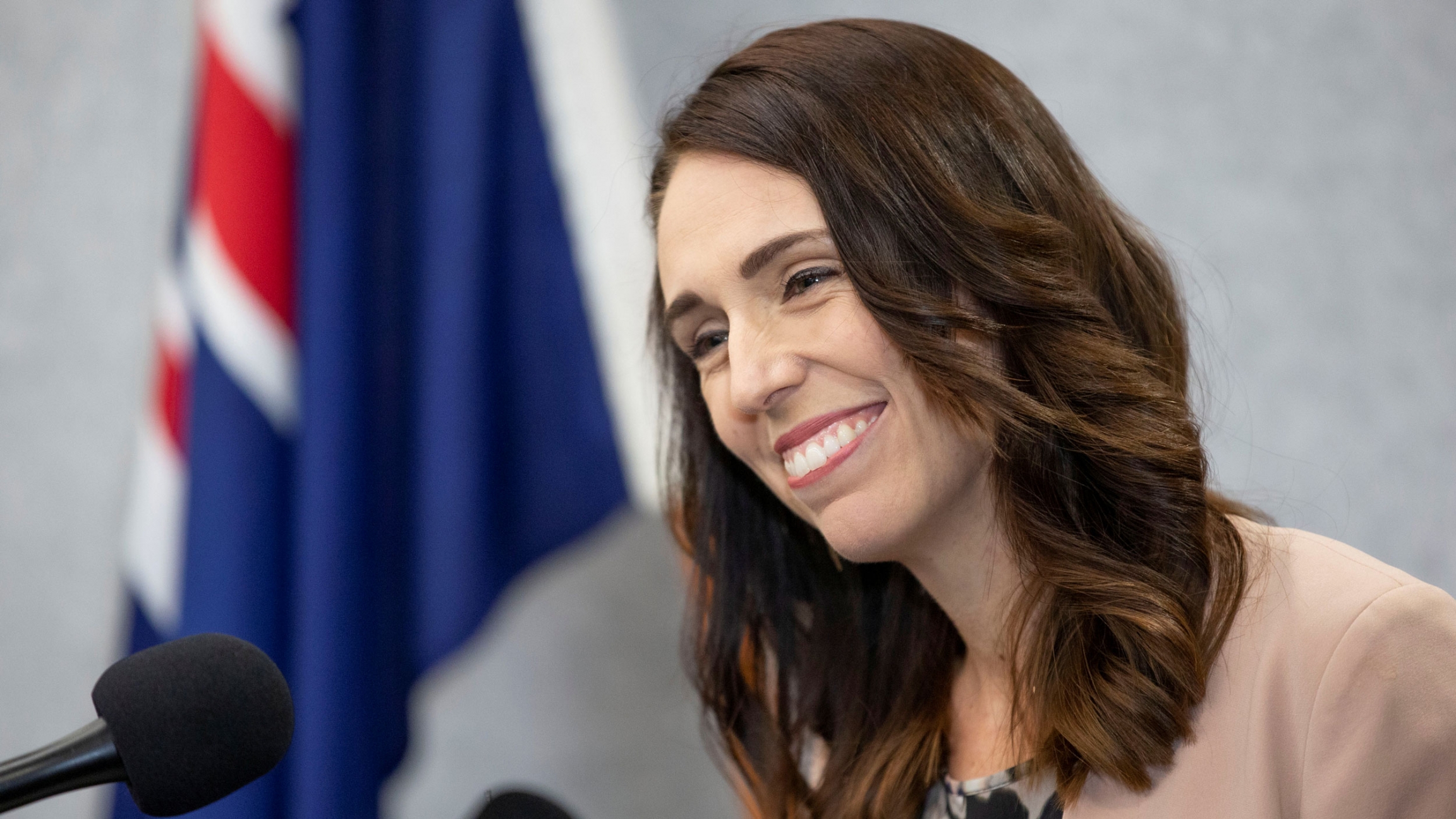 What do countries with the best coronavirus responses have in common? Women in charge.

And few could argue with the fact that New Zealand led by Jacinda Ardern, and Germany with Angela Merkel, have seen markedly low fatality rates from the virus. Taiwan, under the presidency of Tsai Ing-Wen, performed well, too.

A new analysis of 194 countries found that women-led nations have a better handle on the coronavirus pandemic. Not only were infection rates generally lower; average fatality rates were also noticeably lower, too.

Lego is rolling out new building blocks that aspire to be fun and playful in a slightly different way: Braille Bricks. They’re designed to help children who are blind or visually impaired learn the Braille system of reading and writing, where characters of the alphabet are represented by raised dots.

After a pilot program last year, Lego is launching the bricks in seven countries, including the United States, France, Germany, Brazil, the UK, Denmark, and Norway. There are plans to expand to 20 more countries next year. 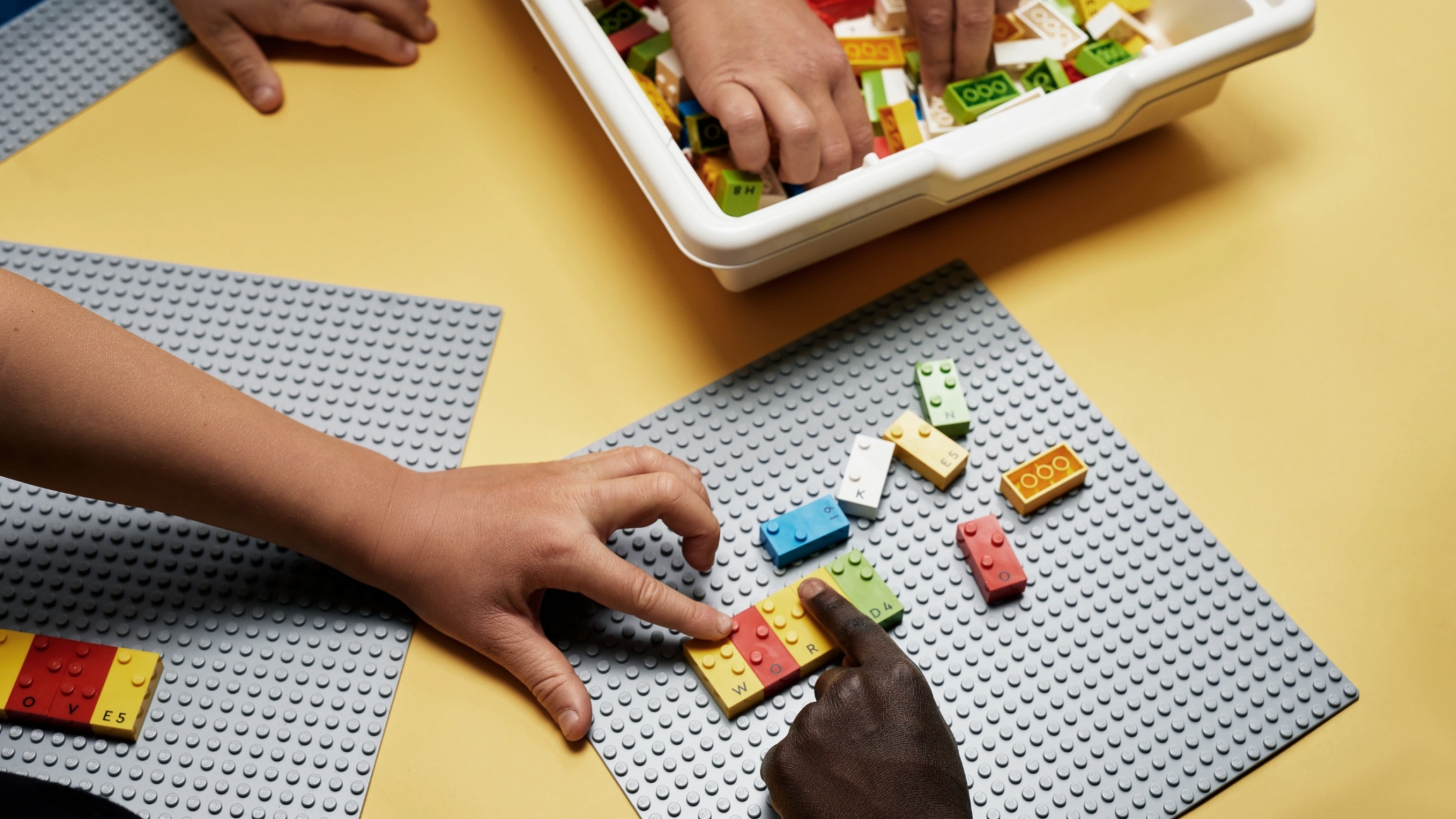 The concept behind Lego Braille Bricks was first proposed to the Lego Foundation in 2011 by the Danish Association of the Blind and again in 2017 by the Brazilian-based Dorina Nowill Foundation for the Blind.

In case you missed itListen: Historic flight between Israel and the UAE lands in Abu Dhabi 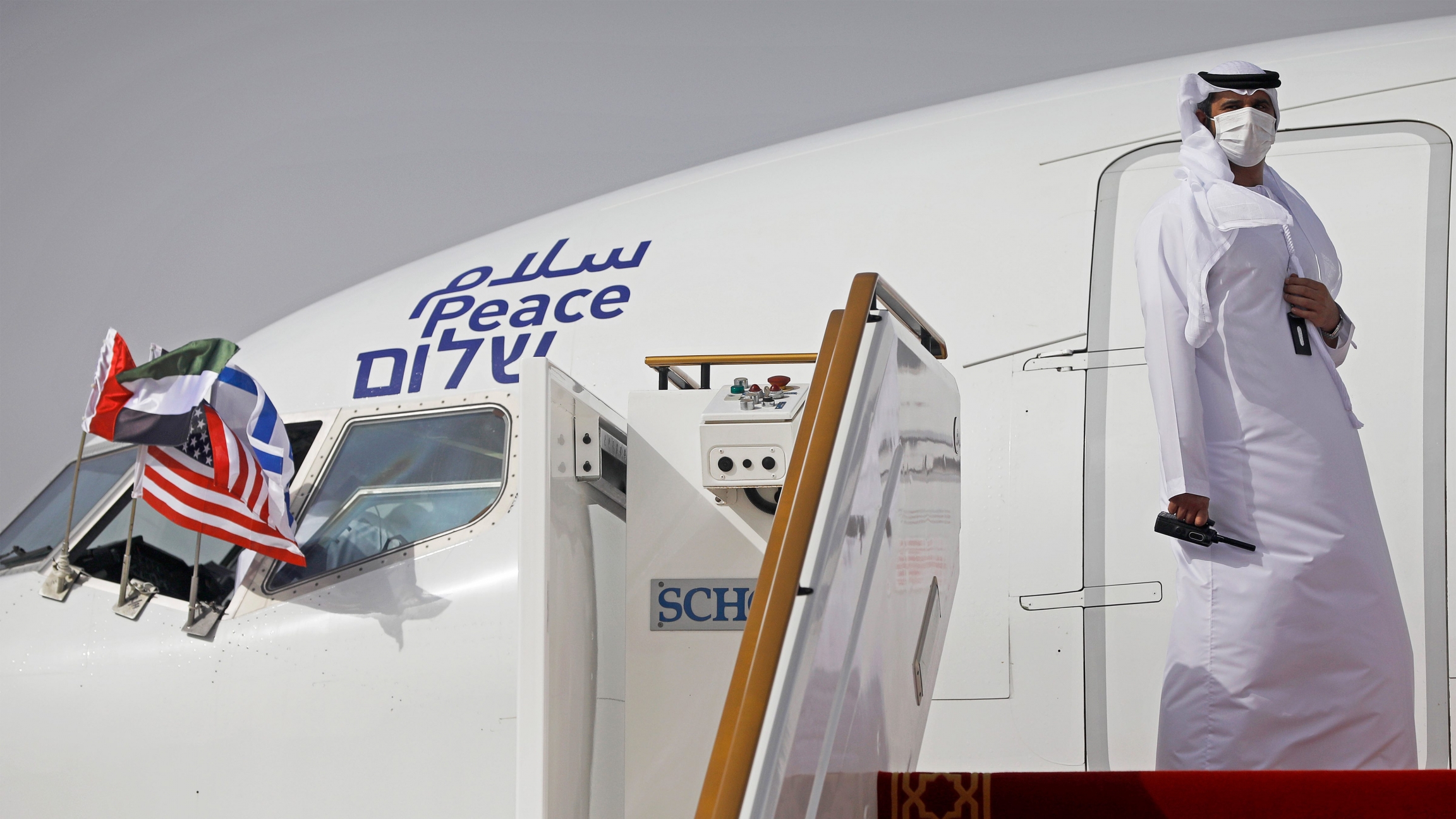 An official stands at the door of an Israeli El Al airliner after it landed in Abu Dhabi, United Arab Emirates, on Monday, Aug. 31, 2020.

Direct Israel-UAE flight makes historic first. Plus, the US and four English-speaking allies have shared intelligence for decades through an alliance called the “Five Eyes.” Now Japan is lobbying to join in. And, a new report from international crime fighters Interpol has found that illegal plastic dumping has sharply increased in the last two years.