In France, the killing of George Floyd invokes the memory of Adama Traoré

George Floyd’s killing sparked protests across the world. In France, it reignited calls for justice for Adama Traoré, a 24-year-old French Malian man who died in police custody almost four years ago.

Assa Traoré, sister of Adama Traoré, a 24-year-old, black Frenchman who died in 2016 during police detention, poses during an interview with Reuters in Beaumont-sur-Oise, near Paris, June 7, 2020.

The death George Floyd, the 46-year-old black man killed by a white police officer on camera late last month in Minneapolis, has sparked protests in cities across the world, including Amsterdam, Seoul and London.

In France, Floyd’s death has reignited calls for justice for Adama Traoré, a 24-year-old French Malian man who died in police custody in a Paris suburb almost four years ago.

Over the weekend, more than 23,000 people across France continued to pay homage to both Traoré and Floyd, denouncing systemic racism and police brutality in a dozen cities including Lyon, Lille, Nice, Bordeaux and Metz. Fearing violence, French police banned protests in front of the US Embassy and on the Champ de Mars lawns in front of the Eiffel Tower in Paris on Saturday.

In a press conference on Monday, Castaner announced that French law enforcement would abandon the policing technique known as le plaquage ventral, or “ventral plating,” a method of forceful detainment that involves “the strangulation” of the neck. Castaner also said he would request the suspension of officers involved in suspected racism, referring to an investigation into racist messages allegedly exchanged by police officers in a private Facebook group of nearly 8,000 members.

For the first time since Traoré’s death in 2016, Macron also asked Minister of Justice Nicole Belloubet to look into the case.

During last Tuesday’s protests in Paris, Assa Traoré, Adama Traoré’s older sister, drew parallels between Floyd and her brother, saying the two black men died the same way in the hands of police.

“Tonight, this fight is no longer just the fight of the Traoré family, it’s everyone’s struggle,” Assa Traoré said. “We are fighting for our brother, in the US, George Floyd, and for Adama.”

The French capital alone garnered support from crowds of more than 20,000 people, defying a ban on large gatherings during the country’s COVID-19 state of emergency.

On the same day, June 2, Castaner defended the police, criticizing peaceful protests that turned violent. In a tweet, he said that violence has no place in a democracy. And he congratulated the police for “their control and composure.” 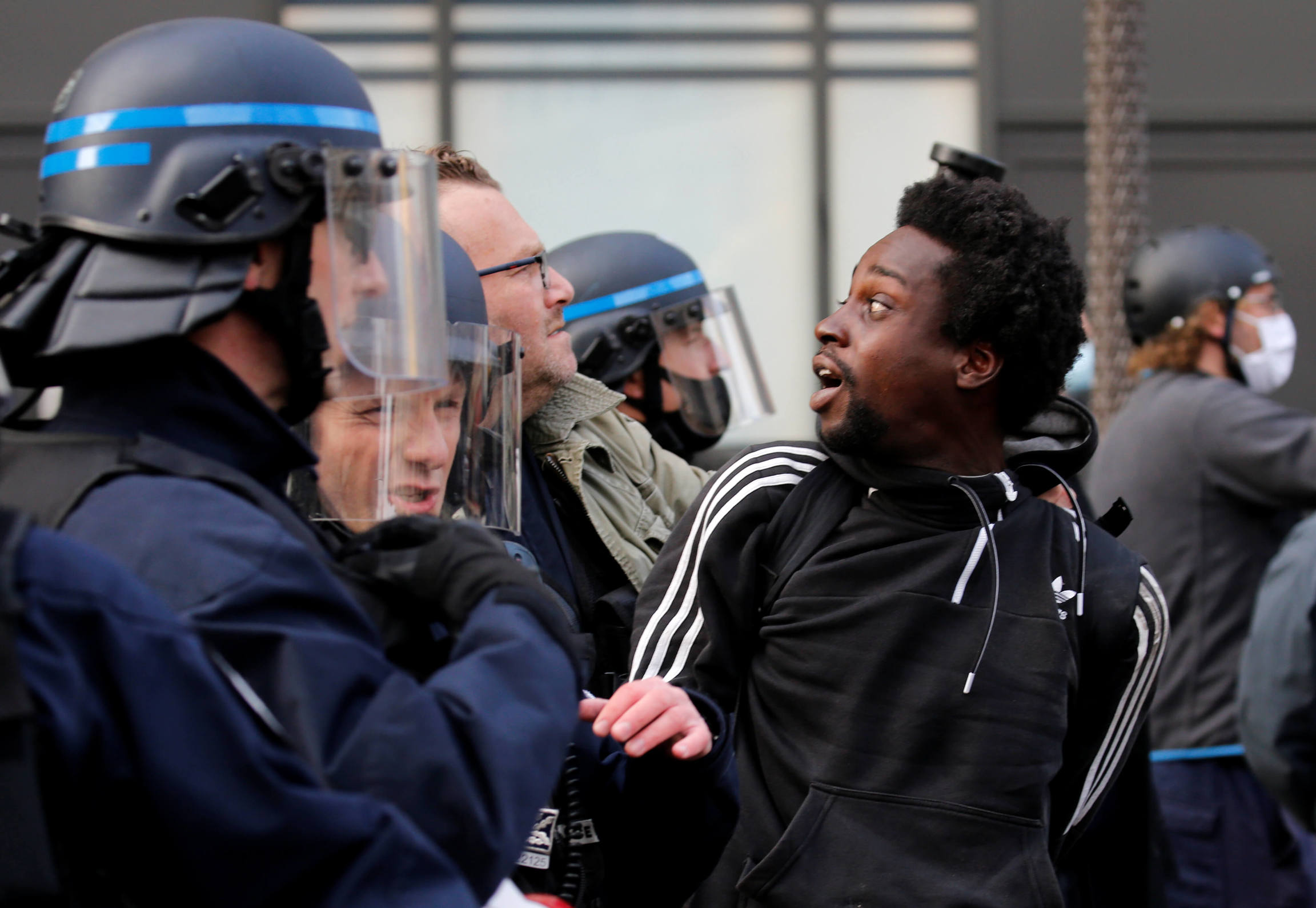 A protester is detained during a banned demonstration in memory of Adama Traoré, a 24-year-old black Frenchman who died in a 2016 police operation which some have likened to the killing of George Floyd in the United States, on the Place de la Republique in Lille, France, June 4, 2020.

Since her brother’s death, Assa Traoré launched Truth for Adama, an organization that has been trying to prove that Adama Traoré died by asphyxiation at the hands of the French police.

Related: The parallels of police violence in the US and around the world

On July 19, 2016, French gendarmes — a military force within law enforcement in France — stopped Adama Traoré as he was riding his bike with his brother on the streets of Beaumont-sur-Oise. Adama Traoré, who didn’t have his identification card on him, ran away fearing arrest. Identity checks are part of legislation in France to clamp down on illegal immigration, and police are known to abuse this practice against any person of color in Parisian suburbs.

Officers chased him down and forcibly detained him. While transported to the police station, Adama Traoré’s condition worsened. He died that evening in police custody while his family was waiting for him at home to celebrate his 24th birthday.

A French court ruled that the gendarmes had no involvement in Adama Traoré’s death and that he died due to underlying health conditions and heart failure.

While the officers involved in the case were exonerated this month, a new, independent report requested by the Traoré family released last week said he died by “positional asphyxiation” — contradicting the original autopsy.

Yassine Bouzrou, the lawyer representing the Traoré family, said that the police used the ventral plating technique where, Bouzrou says, three officers pinned him down onto his stomach with their full weight on top of him — totaling 551 pounds.

Related: ‘No justice, no peace’: Thousands in London protest

“When he was arrested, it was extremely violent. He was crushed by the weight of police officers on top of him. … [Adama Traoré] said he couldn’t breathe.”

“When he was arrested, it was extremely violent. He was crushed by the weight of police officers on top of him,” Bouzrou said. “[Adama Traoré] said he couldn’t breathe.”

“The way people are treated at the banlieue [suburb], it’s like a map,” said Franco Lollia, an Afro Caribbean activist with the Brigade for Anti-Negrophobia in Paris, through an interpreter. “You could compare it to redlining in the United States.”

Redlining was banned more than 50 years ago in the US, but reports say that it reinforced segregation and economic disparities that persist in these cities today.

According to a 2012 report by Human Rights Watch, young black or Arab French people living in economically disadvantaged neighborhoods in French cities are more likely to be stopped by the police, suggesting that the gendarmes and police in France engage in racial and ethnic profiling.

Lollia, who founded his group in 2005, says there is a psychological, implicit bias that exists against people of color in Parisian suburbs, which ultimately perpetuates systemic racism.

When Adama Traoré died that summer nearly four years ago, his death became a rallying call in the suburbs of Paris against police brutality. That July, in 2016, protests lasted for several days in the French capital, with some violent clashes between civilians and police. People in France were starting to make connections to the Black Lives Matter movement in the US, Lollia said, drawing parallels to Michael Brown, Freddie Gray, and Eric Garner, who also said, “I can’t breathe.” 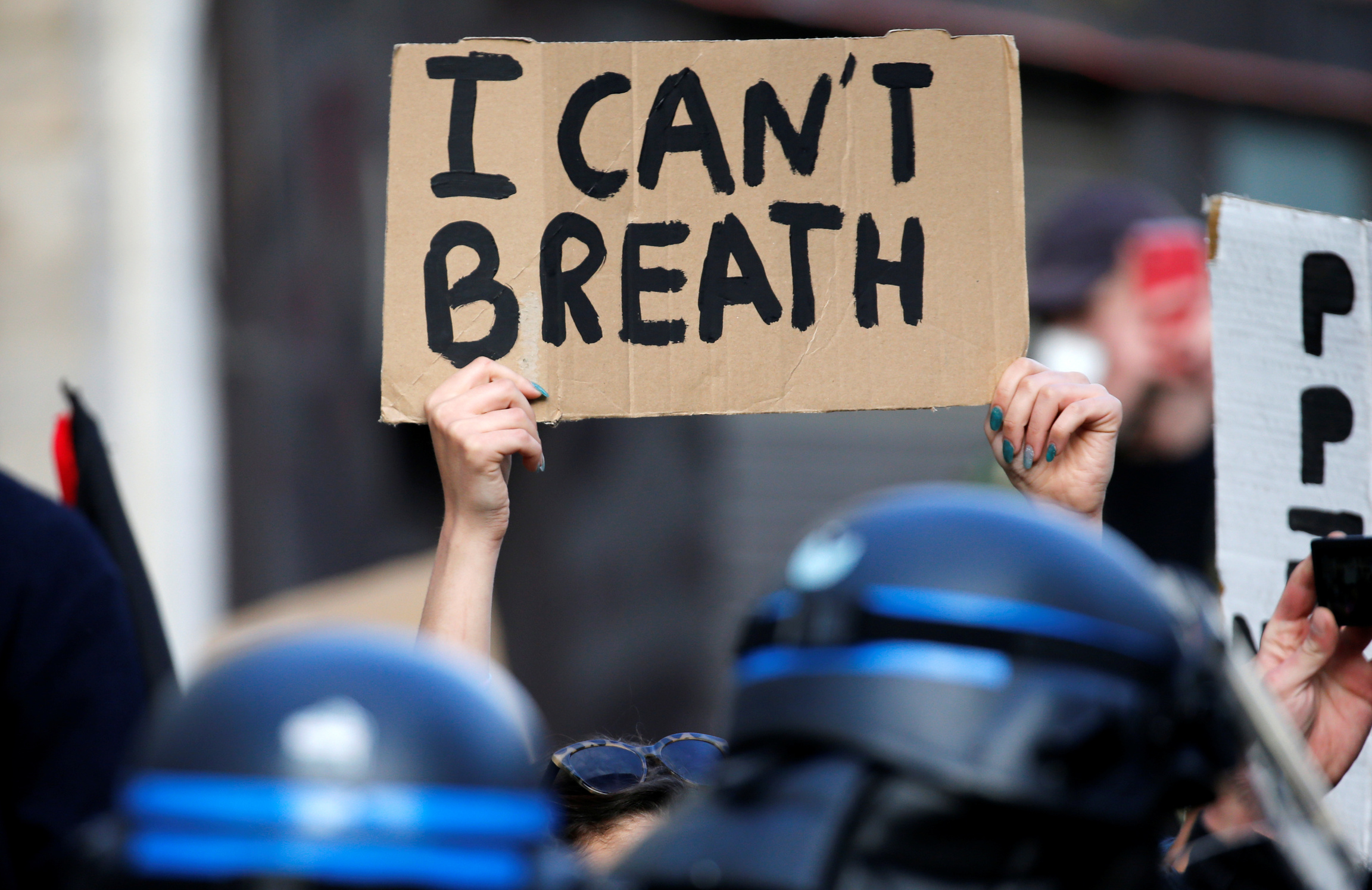 A protester holds a sign during a banned demonstration in memory of Adama Traoré, a 24-year-old black Frenchman who died in a 2016 police operation which some have likened to the death of George Floyd in the United States, on the Place de la Republique in Lille, France, June 4, 2020.

Lollia connected Traoré’s case to that of Floyd, — but with one major distinction.

“What happened to George Floyd was on camera. What happened to Adama was not on film. … So, if I may say so, they didn’t get the chance to get the death on video. This is how cynical the situation gets for us to prove our innocence. It has to be taped.”

“What happened to George Floyd was on camera. What happened to Adama was not on film,” Lollia said. “So, if I may say so, they didn’t get the chance to get the death on video. This is how cynical the situation gets for us to prove our innocence. It has to be taped.”

Bouzrou agrees that there are many similarities between the two cases.

“The first point in common is that both [Floyd and Traoré] died by the ‘ventral plating’ technique, with police officers on top of their backs,” Bouzrou said. “Three police officers were on top of Floyd. And three gendarmes on top of Adama Traoré. The second point in common — they both said they couldn’t breathe. The third point in common is that, in both cases, the first [autopsy] claimed that they died because of a heart attack — Traoré and Floyd. [Fourth,] thanks to independent reports, the real cause of death was found — that is to say, the death was caused by the arrests.”

And finally, Bouzrou said, Adama Traoré and George Floyd were both victims of being black men.

Meanwhile, France’s Police Union official, Yves Lefebvre, insists the two cases are different. According to the BBC, he warned that France’s banlieues were like a pressure cooker, “ready to explode.”

Even though this new report supports Assa Traoré’s claim that her brother was killed by officers, Bouzrou is not hopeful.

“For us, this position is political because it comes from Macron,” he said.

As for Assa Traoré and her family, Bouzrou says they won’t feel justice is served for Adama Traoré until people fight for it.

“We have to fight and denounce this judicial scandal,” Bouzrou said.