In Greece, refugees and migrants turn to each other to get through coronavirus pandemic 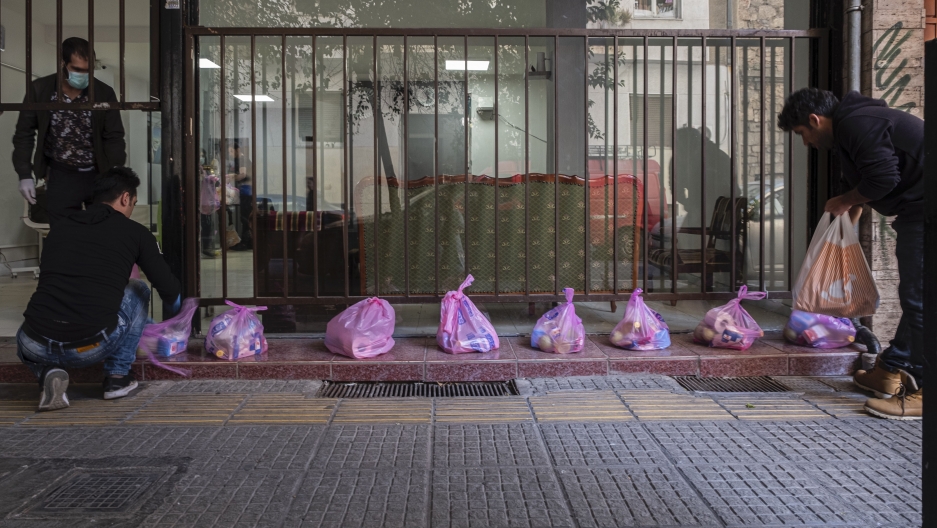 Arash Hampay and a group of volunteers pack and distribute “hope bags” for refugees and the homeless in Athens, Greece.

On a warm April evening in downtown Athens, Greece, Arash Hampay was handing out pink, plastic shopping bags filled with food, soap, hand sanitizer and face masks to refugees and the homeless.

It’s his way of helping the community fight against the coronavirus.

Related: This beloved school gave migrants on Lesbos an escape. A fire turned it to rubble.

Greece closed schools and other places where large groups of people congregate on March 10, and imposed a countrywide lockdown on March 23. Its early and prolonged measures to combat COVID-19 has meant fewer confirmed cases or deaths than many other European countries. As of Thursday, Greece had reported 2,463 cases of COVID-19 and 125 deaths.

Also on Thursday, Greece extended its lockdown by a week to May 4, saying any relaxation would be staggered over May and June. The government has been praised for being proactive to protect its citizens, but concern is mounting over the plight of refugees and migrants.

Dozens of refugees — including many single-parent families — accommodated at a hostel in southern Greece tested positive for the coronavirus on Tuesday. The hostel, quarantined since April 16, is the the third refugee facility in the country to be hit by the virus.

Since the coronavirus outbreak began in Greece, some have sounded the alarm about the lack of resources allocated toward the 115,000 refugees and migrants the country hosts. And now, at least two camps have been put on total lockdown due to a sudden surge in cases. That means tens of thousands of refugees can’t leave their settlements to get basic supplies.

In the absence of adequate support, some refugees have taken it upon themselves to find their own solutions. That includes Hampay, who, before coming to Athens, lived with his younger brother in the infamous Moria refugee camp on the island of Lesbos.

Hampay has long been an active humanitarian and activist. When his brother was held in immigration detention after they first got to Greece, and threatened with deportation back to Turkey, Hampay held a monthlong hunger strike while camping out in the main square in Mytilini. 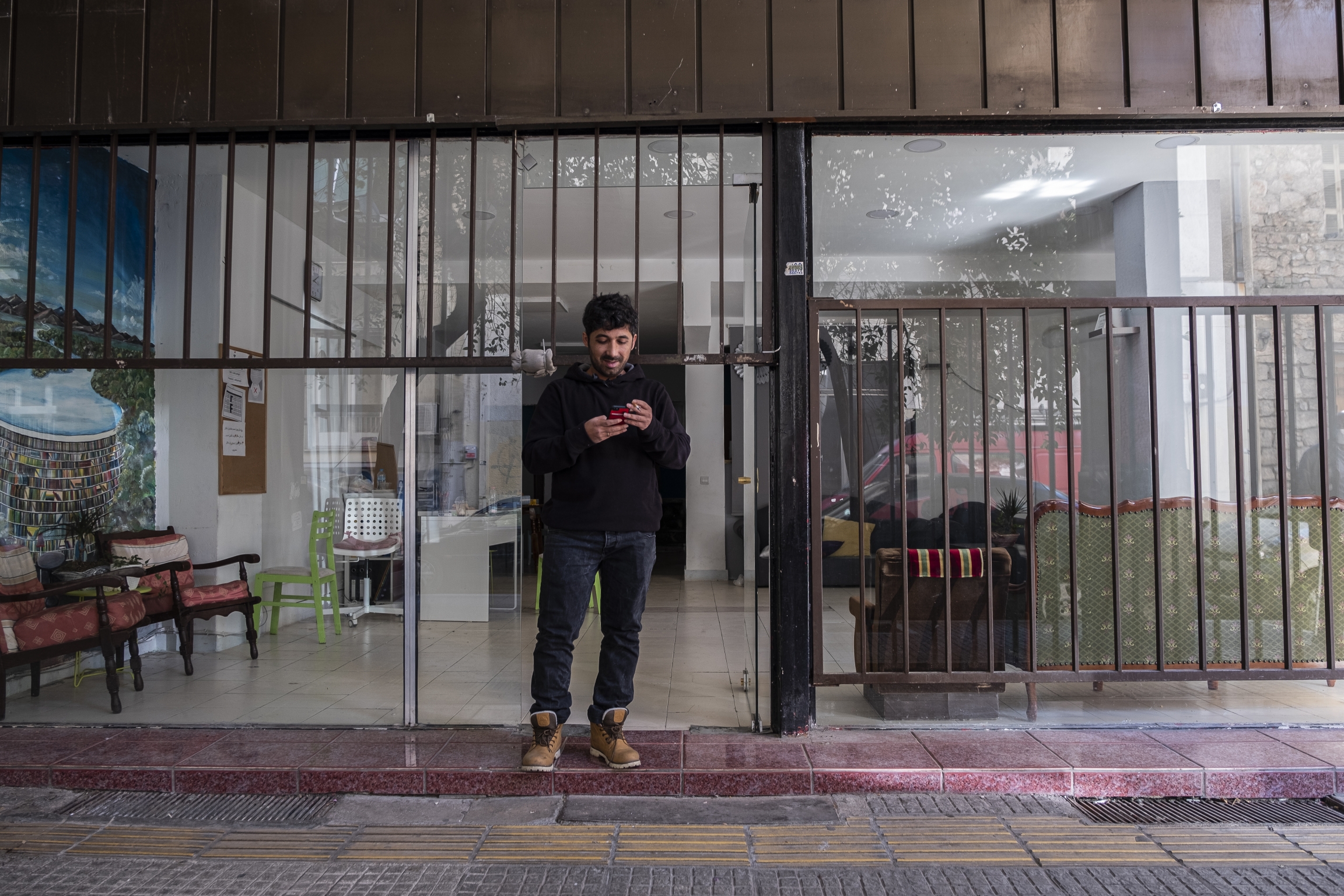 Arash Hampay smokes in front of Cafe Patogh before the volunteers arrive to start packing and distributing the “hope bags” in Athens, Greece.

The Greek government has granted refugee status to the brothers, and they have relocated to Athens where they share an apartment. In 2018, Hampay opened a community center in the neighborhood to help feed poor people in the city. It’s called Cafe Patogh, which means “hangout” in Farsi.

Now, with the coronavirus outbreak, Hampay sees an even greater need to support refugees and locals struggling to protect themselves. Finding other volunteers to help with the supermarket shopping and preparing the food bags, which they call “hope bags,” has never been an issue.

On any given afternoon, at least a dozen volunteers, all refugees like himself, help Hampay dole out food and supplies. Recently, they had prepared two dozen bags, though the number varies day by day — they try to give out food every night, but don’t always have the money.

Securing consistent funding for the bags has been difficult. Hampay isn’t running a formal nonprofit, at least not yet — he’s hired a lawyer and begun the process of registering the community center as a nongovernmental organization, but due to the coronavirus outbreak, everything has stalled.

Instead, Hampay gets funds for what he’s doing in more informal ways — by word of mouth and social media. He has PayPal linked to his social media so that he can receive donations. 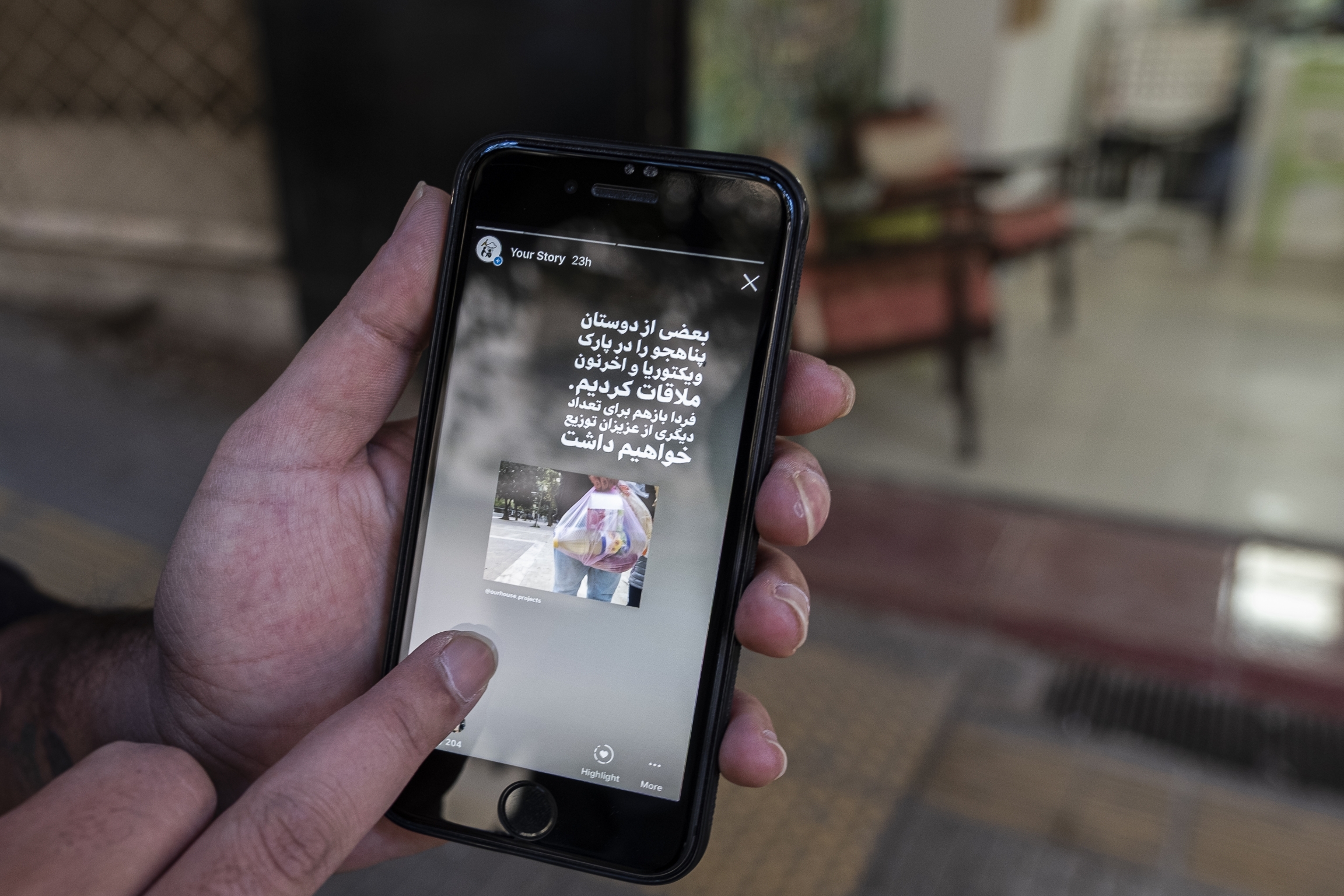 Arash Hampay shows his Instagram account where he makes announcements about pickup times for “hope bags” in Athens, Greece. It’s his way to help in the fight against the coronavirus — bringing much-needed supplies and food to refugees and the homeless.

This week, he put a call out for help covering the community center’s rent and utility bills, which are still due even though the place is closed under the lockdown restrictions. Hampay needs to raise nearly 1,500 euros ($1,622) to keep the community center running. He also needs help paying for the hope bags, which cost a little over 9 euros, or $10 apiece to put together.

Still, he usually has enough money to put some cooking oil, rice, pasta and fresh vegetables in the bags. “When we have good money, we put also sometimes meat and more things.”

Though this month will be tight, Hampay remains upbeat.

He hummed as he placed the bright, pink bags in a line outside the door of the community center. Most people who receive the bags know what time to arrive for pickup, but for newcomers to Athens, he spreads the word with short videos on Instagram. 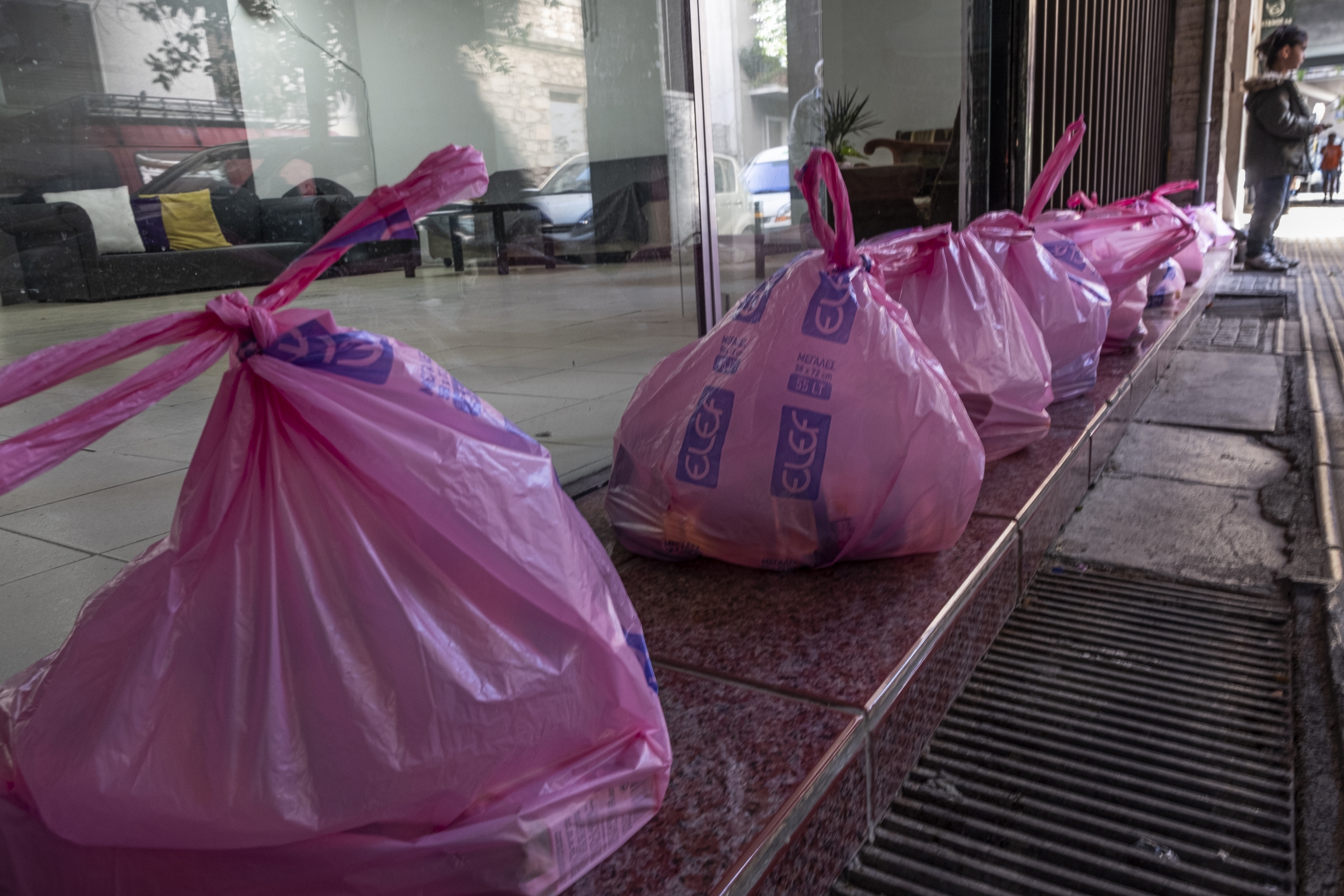 Arash Hampay, who is an Iranian refugee, is trying to bring food and supplies to other refugees and the homeless in Athens, Greece.

As a recognized refugee who doesn’t live in one of the many refugee camps spread across Greece, Hampay has an unusual amount of freedom. But he knows many others aren’t as fortunate.

Sohaila Shojayie is a 15-year-old asylum-seeker from Afghanistan who lives with her family in a tent in the Moria refugee camp. Roughly 20,000 people are crammed into the camp that was built to hold under 3,000.

“Moria itself is a virus for asylum-seekers. There’s no soap, nothing,” she said over WhatsApp. Like everyone, Shojayie is worried about the coronavirus and the potential for a massive outbreak in the camp.

“So, some of us Afghan girls and women, we started working hard making masks for our people, for the asylum-seekers. We want to avoid getting coronavirus at Moria camp.”

“So, some of us Afghan girls and women, we started working hard making masks for our people, for the asylum-seekers. We want to avoid getting coronavirus at Moria camp,” she said.

Shojayie and her peers are producing more than 6,000 masks a day, which they’re able to do with the support of an NGO called Team Humanity. The NGO has been arranging weekly deliveries of mask-making materials — including professional-grade, polypropylene nonwoven fabric.

Salam Aldeen, the founder of Team Humanity, says the mask-making team can supply each camp resident with two masks every three or four days.

“We’re distributing them in the camp with two pieces of soap to each person,” he said. “They’re reusable, and people can wash it. We [give] them also a flyer where it says in four languages how to wash their hands, how to boil the mask — you can boil it in water if you cannot wash it — and you need to do it two times in a day.”

So far, Moria camp has managed to avoid an outbreak of the coronavirus. Shojayie hopes that she and the other volunteers will be able to keep it that way.

“The refugees are happy and appreciate us,” Shojayie said. “They said that if they hadn’t gotten these masks from us, then where would they be able to get them from?”

Recently, Greek authorities have stepped up actions to protect some refugees. Over the weekend of April 18, when most Greeks were celebrating Greek Orthodox Easter in their homes, the government transferred 49 unaccompanied minors from island camps to Germany.

They’re also promising to relocate people who are especially vulnerable to hotels on the mainland. The plan has hit a snag, however, over concerns of spreading the virus. The move will now likely take place on April 25 and with a smaller number than the 2,000 originally announced.

For at least some refugees stuck in the camps, they often have to turn to each other to try to fill whatever gaps they can.

“Here we are taking care of each other,” Shojayie said.

Reuters contributed to this report.