Slowing deforestation could save humanity from the next pandemic

The COVID-19 pandemic is estimated to cost several trillion US dollars. But a new study suggests that spending just a tiny fraction of that to curb deforestation and the wildlife trade could prevent another costly pandemic.

An aerial view of cleared land is seen during an operation to combat illegal mining and logging conducted by agents of the Brazilian Institute for the Environment and Renewable Natural Resources, or IBAMA, supported by military police, in the municipality of Novo Progresso, Pará state, North Region, Brazil, Nov. 11, 2016.

COVID-19 has thus far cost the world over 700,000 lives and vast sums of money in lost gross domestic products and government rescue plans. A new study published in the journal Science suggests we might avoid the next pandemic and save trillions of dollars by spending just a fraction of that amount to curb deforestation and the wildlife trade.

Many human diseases originate in animals — HIV, malaria, Lyme disease and, of course, COVID-19. Scientists call them zoonotic diseases. The novel coronavirus known as SARS-CoV-2 was initially believed to have started in the wet markets of Wuhan, China, from a bat or a pangolin on sale there.

“We see the appearance of new diseases like COVID[-19] overwhelmingly coming from wild animals and to a lesser extent, domesticated animals,” explains Dr. Aaron Bernstein, a pediatrician with the Harvard T.H. Chan School of Public Health and a co-author of the study. “That reflects increasing contact between people and wildlife, in particular, and of course, the reality that we live in a highly connected world with many densely populated cities.”

These two things together amplify the chances that a disease will spread to many other people, once an animal transmits it to a human.

“The reality is that we swim in a common germ pool with all other animals. … So we shouldn’t be terribly surprised that…these diseases, particularly viruses, tend to pop out into people.”

Zoonotic diseases are actually more the exception than the rule, Bernstein notes. The reality, he says, “is that we swim in a common germ pool with all other animals. … So we shouldn’t be terribly surprised that when we’re changing life on Earth at such a rapid rate today, that we’re sort of stirring the pot of the common germ pool, so to speak, and that these diseases, particularly viruses, tend to pop out into people.”

Bernstein says the recent paper came about because “a group of folks were bewildered by how much was being spent to deal with one emerging zoonotic virus. And the question was, how much would we have to spend to do what we know we need to do to prevent these viruses from spilling over into people?”

“The question was, how much would we have to spend to do what we know we need to do to prevent these viruses from spilling over into people?”

Many of these emerging diseases come from deforestation, he notes — not necessarily from cutting down trees, per se, but from all the activities associated with it: building roads, establishing settlements in forests, gathering or poaching wildlife. “So we looked at how much it would cost to reduce deforestation in places that are particularly high risk,” Bernstein says. 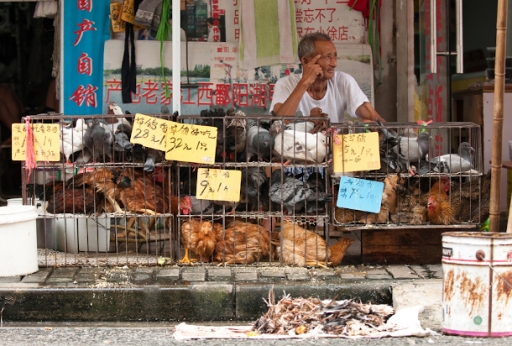 COVID-19 is believed to have started in one of China’s wet markets, likely through consumption of a bat or pangolin.

Emerging infections also come from wildlife trade, he continues. “The part of the wildlife trade that we were most concerned with is actually not at the buyer end; it’s at the procurer end, [the] people who are going out into wilderness and harvesting animals for pets, for medicines, for furs, for all kinds of stuff. And those contexts are the high-risk ones…So, we focus on what it would take to really address the risks.”

The third area that the researchers tackle is surveillance. Ultimately, Bernstein says, it’s impractical to end the wildlife trade and deforestation, as much as people would like to do so. The solution, then, is to have much better surveillance of the wildlife and the people who are at high risk for spillover. “So we try and think through which organizations [could do this] and what the budget would be to do it,” he explains.

There are small-scale programs in various parts of the world already trying to find ways to limit human-wildlife interaction or to track it better. The new paper calls for a scaling up of these efforts, and “we talk in this paper about how important it is to really do good science around the efficacy of these interventions as they scale up,” Bernstein says.

Dramatically reducing deforestation and the wildlife trade would have other valuable benefits, such as saving crucial carbon sinks like the tropical forests and protecting global biodiversity. These benefits are “a critical part of our argument,” Bernstein notes.

“I think many people would rightly be a bit skeptical of how effective the interventions we propose are going to be,” he acknowledges. “I think we are pretty clear that while we know preventing deforestation, addressing the wildlife trade and really doing better surveillance carry the potential to reduce risks of spillover, we can’t say with great certainty what the return on investment is, because we haven’t really done it at scale. And so we need to really understand that.”

“But at the same time,” he continues, “we have a bunch of reasons to be doing these things anyway. Preventing deforestation is the clearest example. We not only have the carbon value, there’s huge water value. Tropical forests are hugely important to local water resources. There’s Indigenous rights. But there are other things that protecting forests does: It prevents fires. And so you see the compounding value that occurs when you protect forests. And now we add another dimension, which is prevention of disease spread.”

Related: Decades of science denial related to climate change has led to denial of the coronavirus pandemic

What’s more, taking these actions would cost a fraction of what the nations of the world are currently spending to cope with the coronavirus pandemic, he points out. The COVID-19 pandemic has so far cost roughly $6 trillion in lost GDP and governments have spent huge sums of money to try and prop up their economies. And when you put a dollar value on all the lives that have been lost, the cost rises by several trillion dollars more, Bernstein notes.

Bernstein and his colleagues estimate that substantially increasing the budget for addressing the wildlife trade, putting in measures to reduce deforestation by half and improving surveillance would cost between $20 to $30 billion.

“So, it becomes clear that salvation comes cheaply,” he concludes.