Saint Sophia Cathedral was built under the reign of Grand Prince Yaroslav, whose father, Volodymyr, converted the region to Christianity.

The Saint Sophia Cathedra as seen from a surrounding wall tower in Kyiv, Ukraine, on March 26, 2022.

More than 160 Ukrainian cultural sites have been damaged or destroyed since Russia invaded the country in February 2022, according to UNESCO.

The Ukrainian government claims the number of damaged sites is far higher. Russia denies these charges.

Ukrainian officials accuse Russia of deliberately targeting cultural sites, half of which are churches, monasteries, prayer houses, synagogues and mosques. Such a targeting would be a violation of international law.

As a scholar who has spent over 30 years studying Russian and Ukrainian religion and culture, I’m deeply concerned about the cultural destruction of this war, which has already claimed thousands of lives and has turned over 12 million Ukrainians into refugees.

An important monument under threat is Saint Sophia Cathedral in Kyiv. Built in the 11th century, the church is one of Ukraine’s seven World Heritage sites recognized by the United Nations. It represents the common Orthodox Christian faith that many Russians and Ukrainians share.

Saint Sophia and the Byzantine model

Saint Sophia Cathedral was built under the reign of Grand Prince Yaroslav the Wise, whose father, Volodymyr — also known as Vladimir — had adopted Orthodox Christianity in 988.

According to a legend in the early 12th-century “Primary Chronicle,” Volodymyr chose Orthodoxy for the beauty of its worship services. The envoys he sent to Constantinople, the capital of the Byzantine Empire, visited the famous Church of Holy Wisdom, the Hagia Sophia. Built by Emperor Justinian in the sixth century, the Hagia Sophia is devoted to the Divine Wisdom, who is personified as a woman in the biblical “Book of Proverbs.” Convinced by his envoys’ favorable report, Volodymyr decided to be baptized and to convert his subjects.

After Volodymyr’s death, Yaroslav invited Byzantine architects and artists to build an impressive cathedral for Kyiv just like the Hagia Sophia in Constantinople. Yaroslav, who had fought a civil war to succeed his father, deliberately imitated the Byzantine capital to buttress his legitimacy. His new cathedral, Saint Sophia, even took its name from the imperial church in Constantinople.

Christian symbolism in the Cathedral

With 13 cupolas and a central dome that rises 29 meters (about 95 feet) into the air, Saint Sophia is an imposing structure that served as a testament to the power and piety of its ruler. Elaborate mosaics decorate the sanctuary and dome. Portraits of Yaroslav and his family are prominently displayed in the cathedral’s princely gallery, where the ruler attended services. 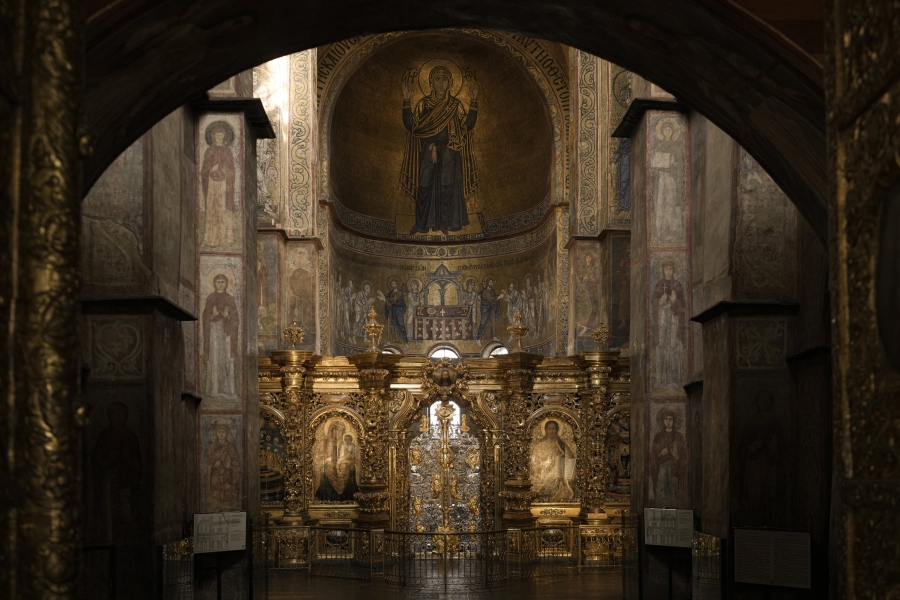 A view of the interior of Saint Sophia Cathedral.

A mosaic of the Virgin Mary, the Mother of God, stands in the apse above the altar. Raising her hands in prayer, Mary is framed by a Greek inscription from Psalm 46: “God is in the midst of Her; She shall not be moved.”

The imagery and language are borrowed from Byzantium. Just as she was seen as a powerful divine protector of Constantinople, so now Mary protects Kyiv. The tall central dome is adorned with a mosaic of an all-powerful image of Christ, known as “Christ Pantokrator,” who gazes down from his throne at his worshipers.

Saint Sophia Cathedral was consecrated in 1049 and completed around 1062. As the power and importance of Kyiv declined, the church suffered from external attacks and internal neglect.

In 1169, the northern prince Andrei Bogolubskii of Vladimir sacked Kyiv — an event that the leader of the Orthodox Church of Ukraine, Metropolitan Epifaniy, has compared to the current Russian invasion. Mongol attacks in 1240, 1416 and 1482 further damaged the cathedral.

Restoration work in the 17th century in the baroque style radically changed the cathedral’s outward appearance. The outer walls were plastered and whitewashed. The church was bombed during the Russian civil war in 1918. Under Soviet rule, the Communists plundered its treasury and secularized the building, which became a museum. In the 1940s, the church again suffered under German occupation.

Saint Sophia Cathedral stands as a monument to the East Slavic cultural heritage that Russians and Ukrainians share. Its extraordinary Byzantine mosaics and frescoes have survived nearly a millennium.

Today, as during the Second World War, Ukraine has been invaded by a foreign army that threatens this heritage. Although Russia has assured the United Nations that its armed forces are taking “necessary precautions” to prevent damage to World Heritage sites, such as Saint Sophia, war is destructive and unpredictable. Whether Saint Sophia Cathedral remains undamaged during this latest invasion remains an open question.