Revisiting Wuhan a year after the coronavirus hit the city

More than 3,000 people died of the coronavirus in Wuhan, China. But there hasn’t been a case there since last spring.

The COVID-19 Exhibition in Wuhan, China, pays tribute to soldiers.

A year ago, I passed through Wuhan just before the city went into lockdown for 76 days.

More than 3,000 people died of the coronavirus here, but there hasn’t been a single new case in Wuhan since last spring. I wanted to return to see how the city has recovered.

First stop, this sprawling exhibition hall. It used to be a temporary hospital for COVID-19 patients. Today, it’s a museum documenting the city’s fight against the virus. It’s strange to walk through a museum that explores a threat that is still very real for so many people — even here.

Outside, large banners feature the faces of front-line workers. And giant Chinese characters read, “The people and life above all else.”

Inside, a massive screen displays China’s leader Xi Jinping larger than life, praising the response to the pandemic. There’s a timeline of what the government did and when, and photos and videos showing the actions of top leaders.

The heart of the exhibition is a re-creation of the hospital ward that stood at this very spot. A 3D hologram shows hospital workers in full protective gear fighting to save their patients’ lives. Hospital cots are set up as if still in use. 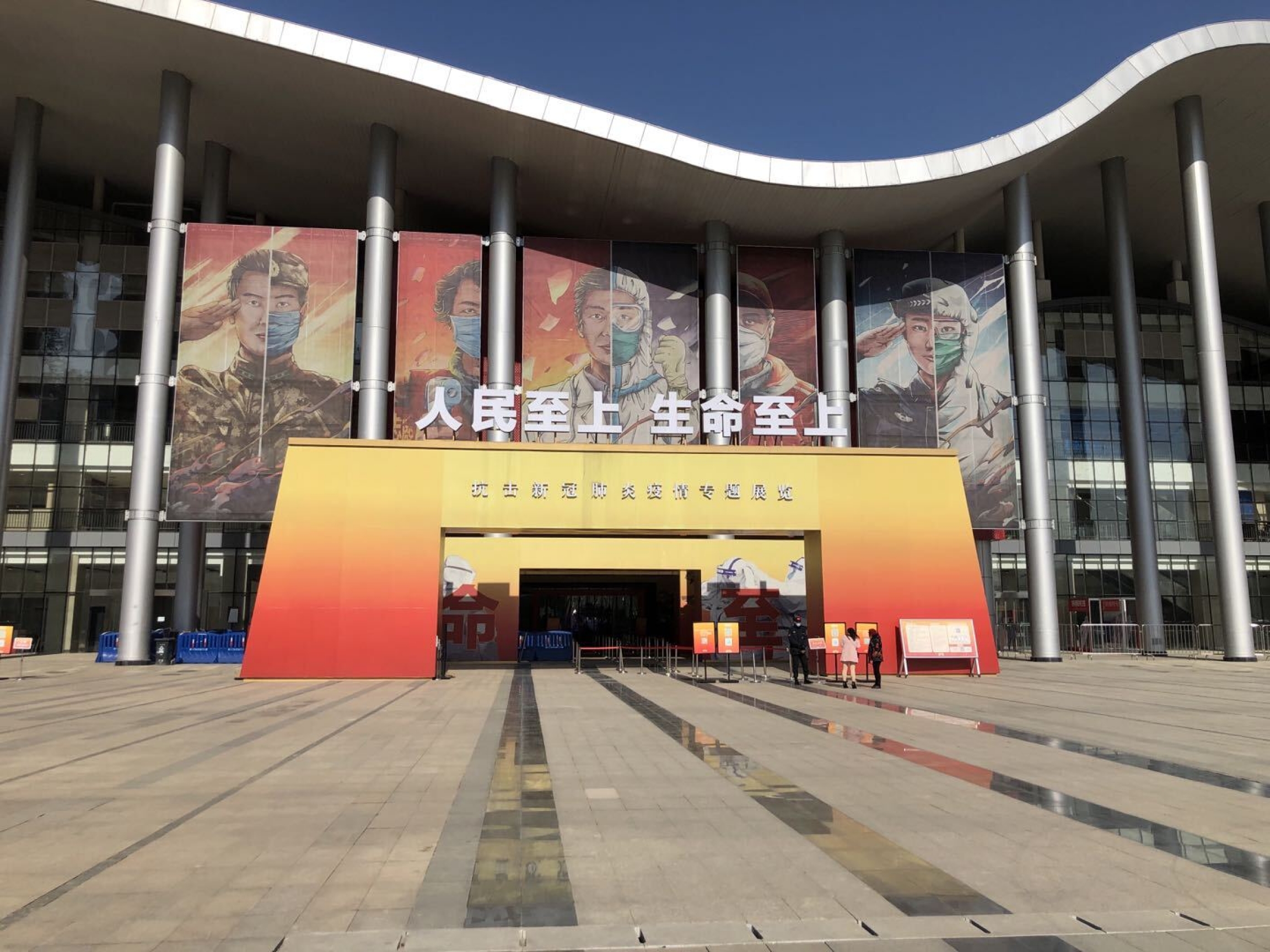 An exhibit in Wuhan, China, documents the story of the coronavirus in the city.

Tour guides lead visitors through the hall filled with drawings made by patients, even an ambulance. Visitors can lay virtual flowers in front of small black-and-white photos of COVID-19 martyrs, including Li Wenliang, one of the doctors who warned about the virus early on and was punished for doing so. Of course, that part was left out.

College student Zhao Xin Yu says he traveled from Beijing to see for himself how Wuhan has recovered.

“I feel like they gave so much. So many people from the top government leaders down to each volunteer really pitched in to help out.”

“I feel like they gave so much,” he said. “So many people from the top government leaders down to each volunteer really pitched in to help out.”

One of the videos shows Wuhan residents saying farewell to the medical teams who came from all over China to help out, with a song playing in the background called, “Let Me Thank You.”

Then the mood of the exhibit lifts, and one last display shows Wuhan’s vibrant street life, everything back to normal. The message is clear: The government led the city out of the crisis.

Not everyone feels that way though. I talked to a few people here who feel their lives can never go back to normal.

Last January, Yang Min’s 24-year-old daughter went to the hospital for chemotherapy. Then she got a fever. Doctors said she was getting better, but she died of COVID-19 shortly after. Because Yang was also sick, she didn’t learn about her daughter’s death until weeks later. She’s angry at what she calls a cover-up.

Related: WHO team arrives in Wuhan to investigate pandemic origins

I want justice for my daughter, she says. I want the officials who concealed the epidemic and didn’t act to be held accountable. This is my only reason to live now. 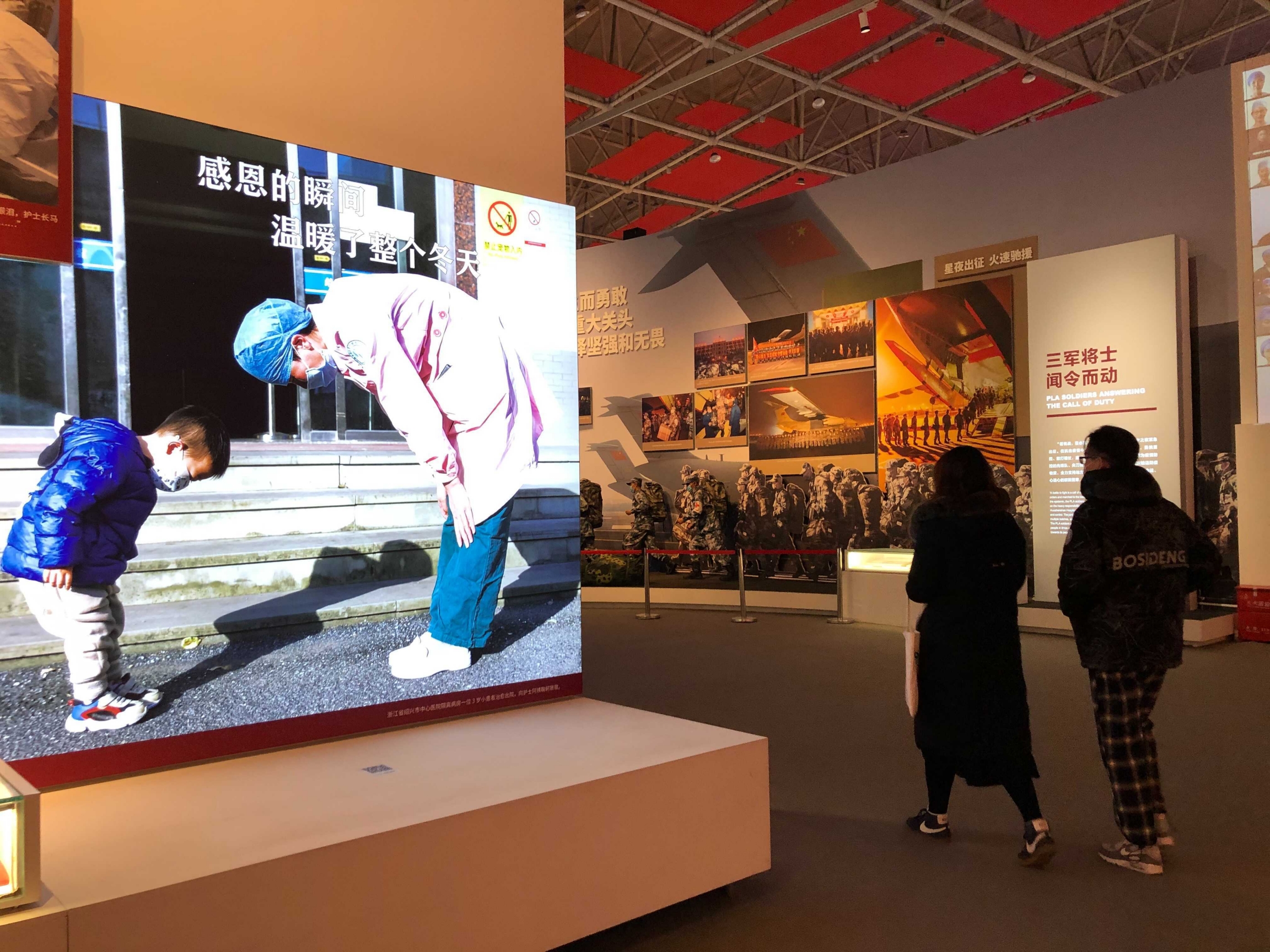 Visitors at the COVID-19 Exhibition in Wuhan, China, get a closer look at photos on display.

Like everyone who has lost a family member to the virus, Yang was offered just under $500 compensation. She refused it and has been trying to sue the government ever since. The courts won’t take her case. After she visited the local government office to complain, the police came.

“The next day, they restricted my personal freedom and prevented me from going outside my apartment complex. They changed my health code color from green to red and said I couldn’t go out.”

“The next day, they restricted my personal freedom and prevented me from going outside my apartment complex,” she said. “They changed my health code color from green to red and said I couldn’t go out.”

Zhang Hai is also trying to sue. A year ago, he brought his 76-year-old father to Wuhan for hip surgery. Within 15 days, his father contracted COVID-19 and died.

Zhang is filled with guilt. I sent my father to his death, he says. Zhang thinks the government needs to be held accountable for its mismanagement in the early days.

“The virus broke out because of the government’s underreporting,” he said. “That killed people. How can you praise yourself for later actions? What matters most is what you did at the beginning.”

But a year after the lockdown, voices like Zhang’s and Yang’s are not welcome. They say they are under surveillance. They’ve been blocked from social media, and have been called to talk to police numerous times. Local journalists can’t publish interviews with them.

There are others here in Wuhan who just want to put that difficult time behind them.

Like at a pub in Wuhan that is packed with customers who drink and laugh, masks off.

Hu Zheng Hong was having a beer with a couple of friends. He says that going through the lockdown brought people together. I ask him if he feels like Wuhan is back to normal. 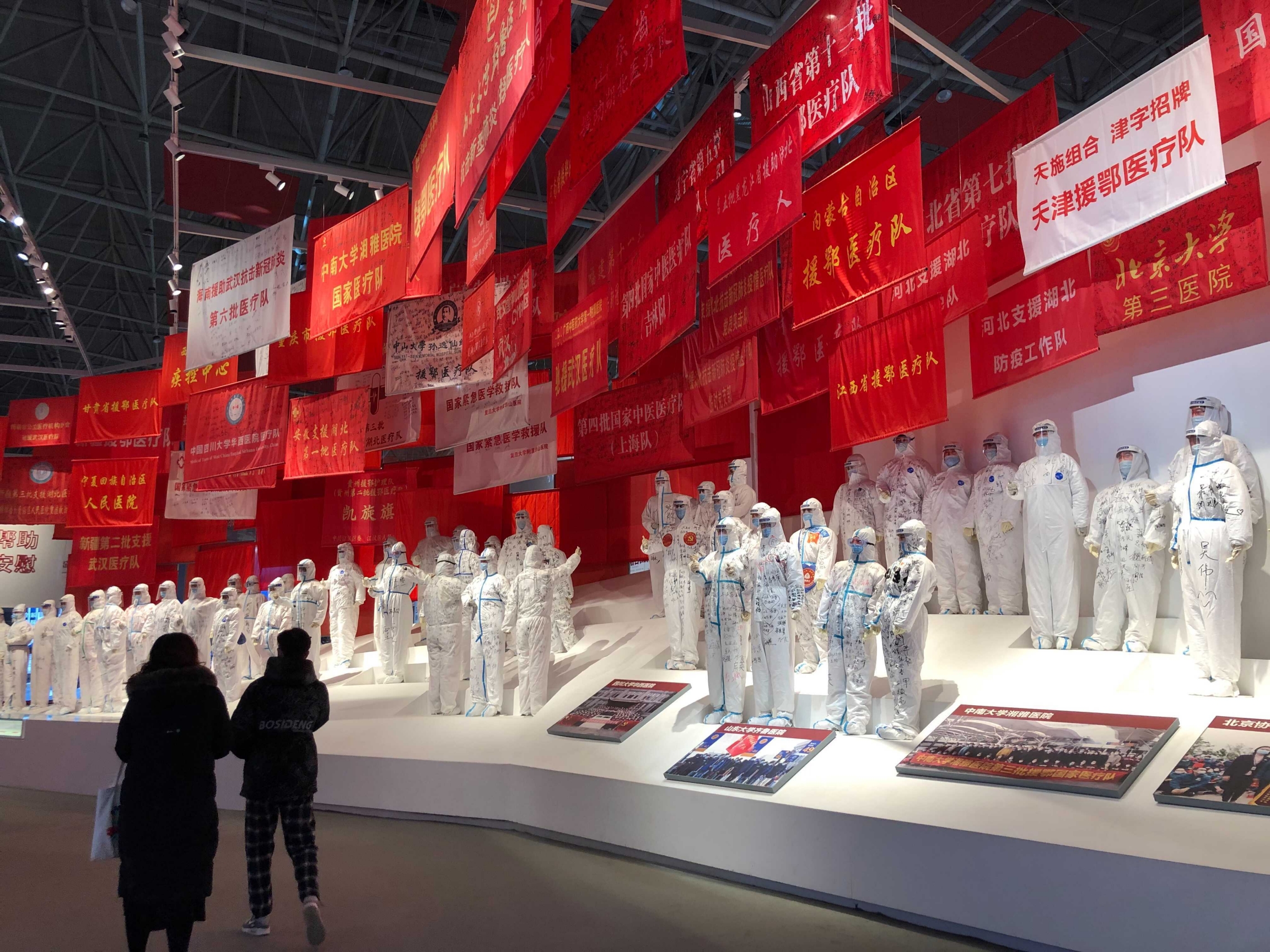 “Well, 80% really,” he said. “As long you have your health and your life, that’s most important.”

He and his friends just want to enjoy themselves. Others tell me there’s a feeling of anxiety bubbling beneath the surface. No one wants to let down their guard too much. Some are hoarding food to prepare for a second wave.

“But there’s a vaccine now and we’ve learned from our experience last year, so we’re not as worried as we were then,” he said.

The people of Wuhan want to move on but until the pandemic ends, it seems they will always have to be on alert.