Former South African President FW De Klerk has died at the age of 85. Dave Steward, chairman of the FW de Klerk Foundation, spoke with The World's host Marco Werman about the late president's life and legacy in South Africa.

On Thursday, FW de Klerk, the last president of apartheid South Africa, died at the age of 85.

The FW de Klerk Foundation issued a statement that the former president had been receiving treatment for cancer.

De Klerk was a white Afrikaner — a South African ethnic group descended from predominantly Dutch settlers who arrived in the 17th and 18th centuries.

De Klerk came from a political family and throughout most of his career, he defended apartheid.

That changed in 1990 after releasing anti-apartheid revolutionary Nelson Mandela from prison. He worked with Mandela to end racial segregation and apartheid in the country. For this achievement, both leaders were awarded the Nobel Peace Prize in 1993. 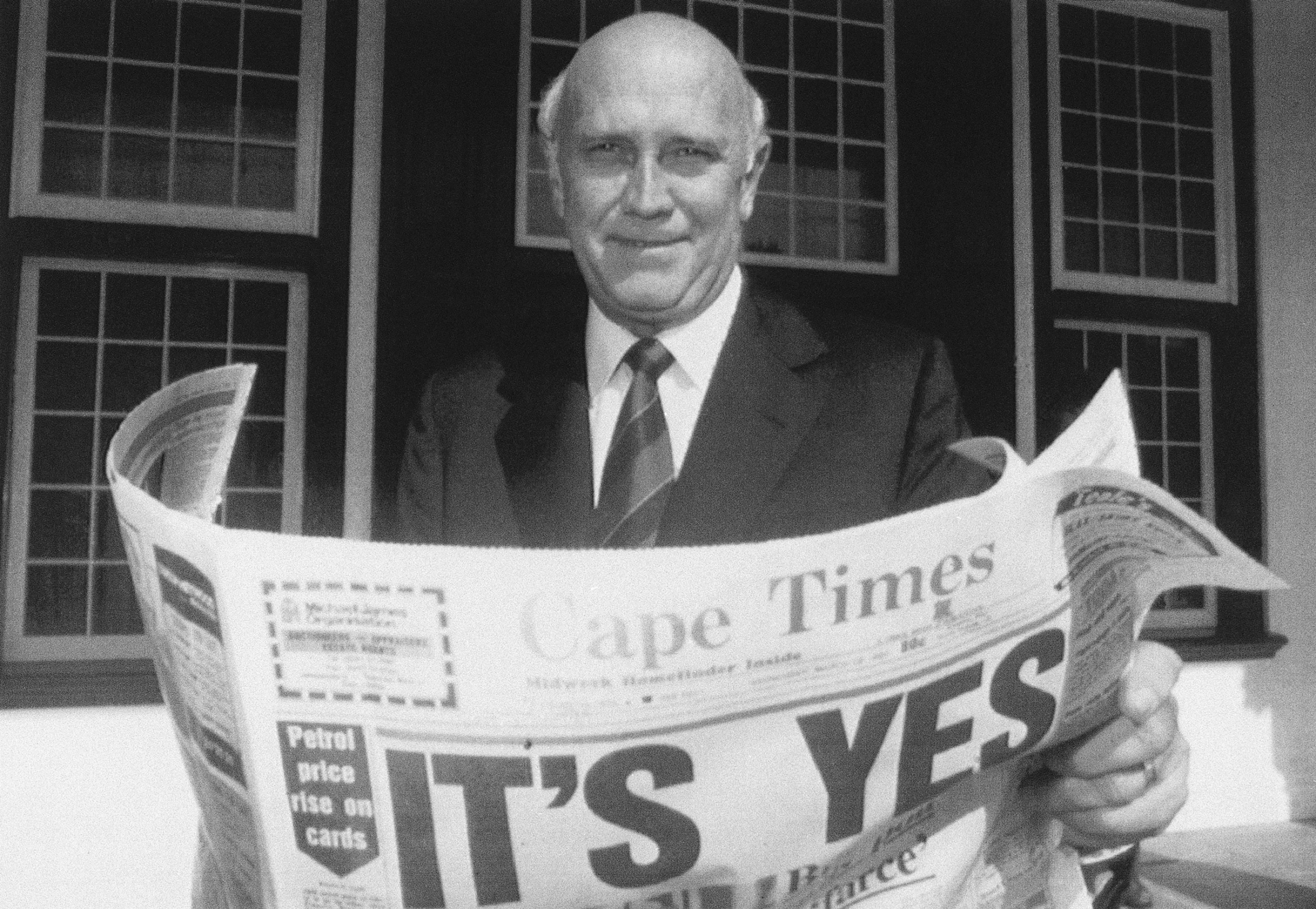 South African President FW de Klerk poses outside his office in Cape Town, South Africa March 18, 1992, while displaying a copy of a local newspaper with banner headlines declaring a "Yes" result in a referendum vote to end apartheid and share power with the Black majority for the first time.

Marco Werman: Could we start with FW de Klerk's background? How did that shape his early politics? Dave Steward: Well, FW de Klerk was born into an Afrikaner nationalist family. His father was a prominent politician, and their goal was to reestablish an Afrikaner Republic in Africa. When he was born, the rest of Africa was under colonial domination. The United States — you had Jim Crow laws. It was a different universe. So, that's what he grew up with. And as he went into politics, he began to realize how impossible it was going to be to retain a right to Afrikan national self-determination in a country where Afrikaners were a diminishing minority.But for years, publicly, de Klerk defended apartheid. What argument did he use?Well, they were looking for some kind of solution that would allow all of the peoples of South Africa to have self-determination — but it was nonsense. And I think he began to realize that reform wasn't going to work. There had to be transformation, and de Klerk accepted that, and he dedicated his presidency to the abolition of apartheid. And when that idea came to de Klerk, why didn't he immediately say, "Let's just transform the whole system."Well, mainly because he would have been kicked out of office very quickly. The whole process of changing a society is fraught with difficulties. The real challenge is to persuade your support base to go along with a process that will inevitably undermine their position, and that was his great skill.

Later in life, de Klerk apologized for apartheid — including in this video that your foundation released: "I, without qualification, apologize for the pain and the hurt and the indignity and the damage that apartheid has done to Black, brown and Indians in South Africa." Mr. Steward, I have to ask you. That video was posted today, on YouTube. When did President de Klerk record that message? He recorded it about … six weeks ago.

What was he feeling so close to the end that he felt necessary to repeat once again that apology for apartheid? Well, it's because that's the way he really felt about it. He really felt very bad about the enormous harm and damage and indignity that had been done to so many generations of nonwhite South Africans. So, he wanted to record that as part of his testament.

As I think about de Klerk's words in his apology, the news today almost comes across the board, as de Klerk was the man who ended apartheid — but waited too long. Did you ever hear him reflect on that?I don't think he thought that he waited too long. History and politics moves at their own pace. If he tried to do in 1980 what he did in 1990, it just simply wouldn't have worked. He would have been kicked out of power very quickly. So the real challenge for statesmen as opposed to politicians is to watch the tide of history and to ride the wave when it breaks and to realize when it's going to break. And that's what de Klerk did. In fact, he has said that his greatest achievement was actually handing power over not to the ANC, not to President Mandela, but to a new, democratic constitutional system. So maybe that's how we will remember him.