As demonstrations against police brutality and racism continue in the US and in other parts of the world, people who work with police departments to address biases and build ties with communities of color are questioning the effectiveness of their work. The World looks at the San Jose Police Department, which, despite its diversity, was criticized for its response to recent protests.

For years, Derrick Sanderlin volunteered as a trainer to help San Jose police officers to spot their biases. He also worked to improve their ties with African Americans like him, as well as the city’s large immigrant communities.

Then, on May 29, he participated in a Black Lives Matter demonstration in downtown San Jose. Things grew tense.

“I saw a fair amount of innocent protesters just being shot with rubber bullets, some at point-blank.”

“I saw a fair amount of innocent protesters just being shot with rubber bullets, some at point-blank,” Sanderlin said.

He stepped forward between the officers and protesters to plead for calm. A local ABC station showed what happened next: Officers pointed their riot guns at Sanderlin as he stood several feet away, not making any aggressive moves. Still, he was fired at several times, with one rubber-coated bullet hitting him in the groin.

“It took me a second to really process the pain in that situation,” Sanderlin said. He needed emergency surgery. Doctors have told him he may no longer be able to have children.

As demonstrations against police brutality and racism continue in the US and in other parts of the world, people like Sanderlin — who work with police departments to address biases and build ties with communities of color — are questioning the effectiveness of their work. Meanwhile, some police officers who are minorities and immigrants themselves say they feel torn over their own communities’ distrust of law enforcement. 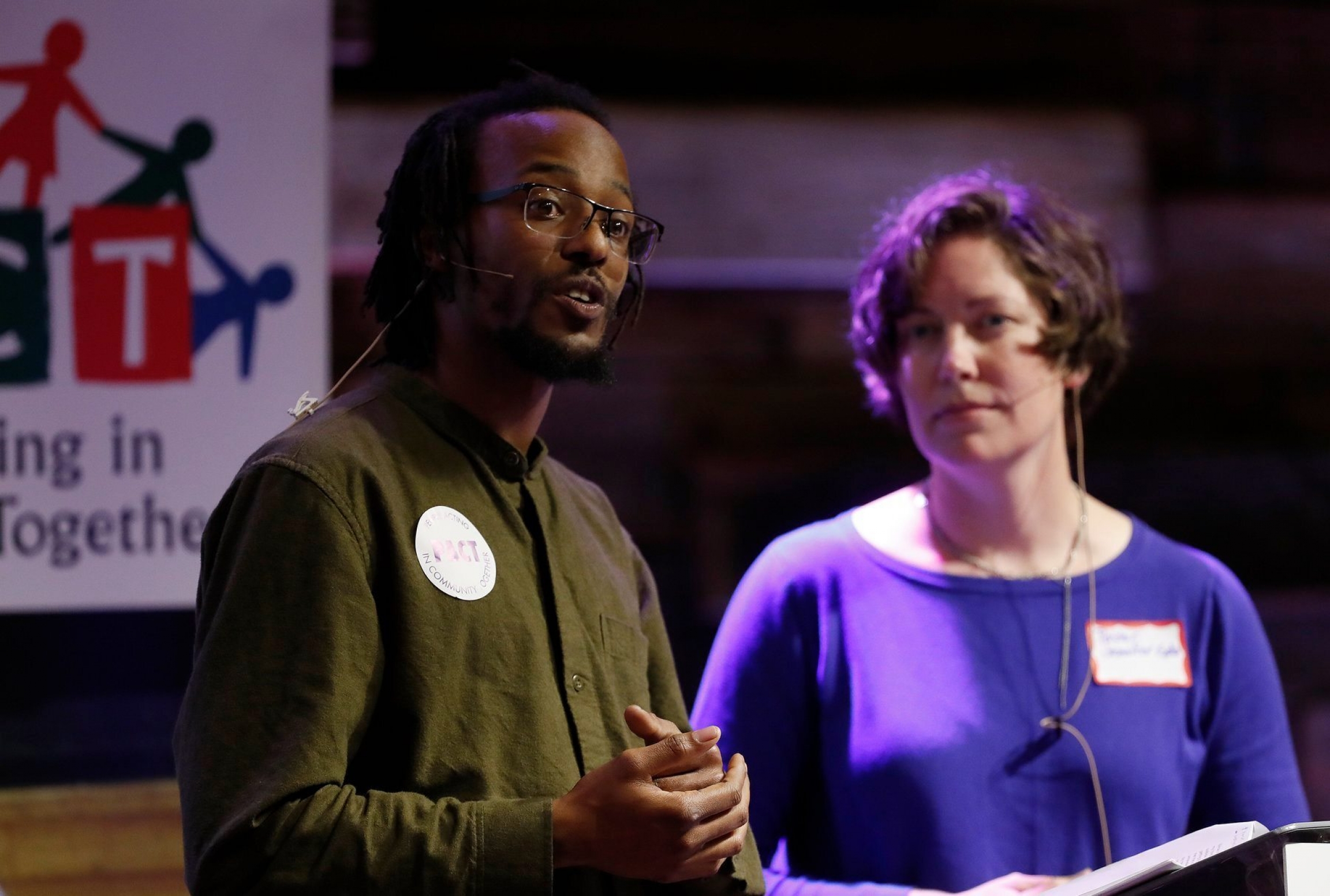 Derrick Sanderlin, left, a community organizer in San Jose, California, speaks at a meeting of People Acting in Community Together, or PACT, a group that seeks to create a more just community.

Asked if he would work with the police department again, Sanderlin said he was not sure.

“I have sorta held my tensions long enough, I think,” he said. “And if our city doesn’t make a serious change when it comes to how and when we depend on police, I think it would dramatically change how I participate.”

Among other things, he’s questioning what it means to have a diverse police force, a mission he has long believed in.

“Diversity is important,” he said. “But if there’s even a small faction within the department that’s sort of determining how they view neighborhoods of color, you know, diversity kind of flies out of the window.”

Sanderlin is not alone in thinking this way.

Tracey Meares is a professor at Yale Law School and founding director of the school’s Justice Collaboratory, which pushes for criminal justice reform that increases cooperation between individuals and the state.

“What communities have been saying is that it is important for you to look like me and to reflect who we are,” said Meares, who also served on a task force created by former President Barack Obama to examine policing after the death of Michael Brown in Ferguson, Missouri, in 2014.

Still, she added, diversity alone is not enough.

“I don’t think that you can expect necessarily that having a more quote-unquote diverse police force is going to advance the question about how people act related to bias,” she said. “That is not a project for the police department alone, again, because it’s about the structure of society that we live in.”

Stephen Donahue, a lieutenant for the San Jose Police who leads recruitment and hiring for the department, agrees.

“It’s the culture in that department and it starts at the top and it disseminates its way down through the ranks to the officers on the street.”

“It’s the culture in that department and it starts at the top and it disseminates its way down through the ranks to the officers on the street,” he said.

But like many others, he still believes diversity among officers is important.

“We’re not all white people trying to police other people,” he said. “The minority of our department is white.”

The San Jose Police Department employs many minority officers. One of them is Silvana Cespedes, a patrol officer who was assigned to control the crowd at the May 29 protest in San Jose where Sanderlin was injured with a rubber bullet.

“I was first in line at the protests, literally having rocks and bricks and flares — lit flares of fire thrown at me,” Cespedes said. “And obviously they’re ruining it for the people there exercising their rights.”

Cespedes was 18 when she moved to the US from Bolivia, where she believed police officers were corrupt. In the US, she said, she felt a difference.

“I was, like, ‘Wow, police officers are just, like, good people’,” she said. “I could trust the police.”

As an officer for the San Jose Police, she said she has worked to build relationships in the heavily immigrant areas she patrols.

Recently, she started teaching her colleagues Spanish — a first for the department in an area with a huge Latino population. Other officers are learning Vietnamese, another commonly spoken language in San Jose.

Cespedes values the diversity of her team: “I have someone from Mexico, from Japan, a Hispanic guy and then it’s me,” Cespedes said.

She said she is hurt to hear more people say they don’t trust the police. That’s how she felt about police growing up in Bolivia.

“It makes me sad because that’s a memory that I carried here, as an immigrant coming from a country where police interactions are not pleasant.”

“It makes me sad because that’s a memory that I carried here, as an immigrant coming from a country where police interactions are not pleasant,” she said.

Despite all the recent protests, Cespedes said she is determined to keep working like always. Her immediate family supports her, she said, but not all of her relatives do.

“Family members who — out of nowhere — start calling me a horrible person,” she said. “I don’t understand because they’ve known me my whole life and they just refer to me that way because I wear a badge.”