Police killing of George Floyd strikes a chord in Kenya 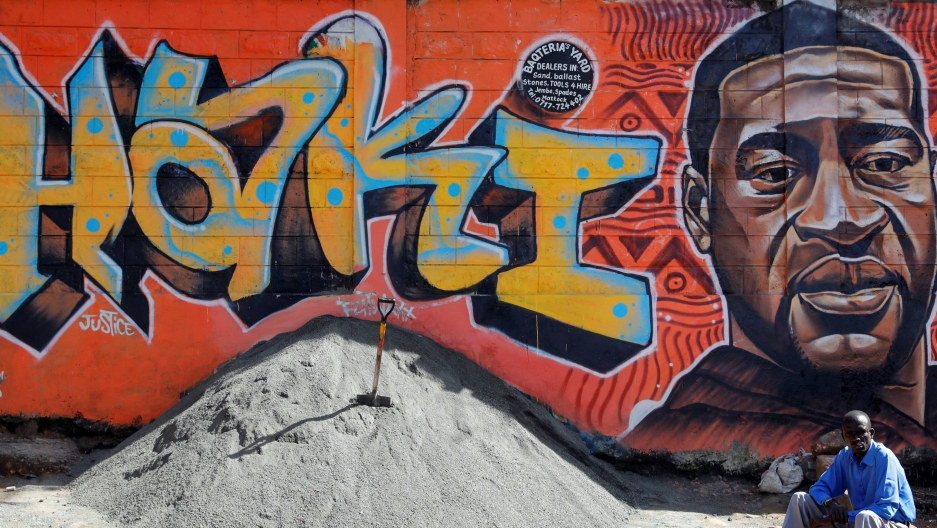 A man sits under a graffiti depicting African American man George Floyd, who was killed by a police officer in Minneapolis, in Kibera, Nairobi, Kenya, June 4, 2020. The writing reads ”Justice” in Swahili.

Early this week, Nafula Wafula, a Kenyan activist, got a call from an American friend living in Nairobi. They talked about the recent killing of George Floyd by a police officer in Minneapolis, Minnesota.

“When she called me, at the same time I was thinking about the police brutality that is happening here in Kenya,” said Wafula, who is the vice-chairperson of policy at the Commonwealth Youth Council. She also has a brother who lives in the United States.

“The persons in the poorest communities, informal urban settlements face more police brutality, while in the US it’s more racial.”

“The persons in the poorest communities, informal urban settlements face more police brutality, while in the US it’s more racial,” said Wafula. Last year, more than 100 people were killed by police violence in Kenya, according to human rights groups.

When Kenya enacted restrictive policies to curb the spread of coronavirus, activists sounded the alarm about deadly policing. According to Kenya’s Independent Police Oversight Authority (IPOA), more than 15 people were killed by police during the coronavirus curfew — including children. Community organizers say that number could be much higher.

On Thursday, the IPOA announced that six police officers would be arrested and charged over the deaths and assault of Kenyans during the coronavirus curfew, including Yasin Hussein Moyo, a 13-year-old boy killed in March.

Yet, last Friday, Kenyan police officers killed two children and a woman lost her unborn baby during a police raid in the coastal region of Kwale. Days later, Kenyan police reportedly killed a homeless man in the poor neighborhood of Mathare, in Nairobi. Videos on social media show residents demonstrating in the middle of the night on Monday.

Related: ‘No justice, no peace’: Thousands in London protest the death of Floyd

Despite a nationwide curfew and limit on public gatherings, Wafula and her friend organized a small demonstration of their own on Tuesday, outside the US Embassy in Nairobi. Shortly after, the US ambassador released a video statement condemning the killing of George Floyd, a black man.

For some, it’s a sign of how much the police killing of George Floyd, and the nationwide protests, has resonated within other countries where police violence is also a problem.

“The events happening in the US have sparked police accountability questions in Kenya. … The cops are very clever in terms of hiding evidence and blaming these victims for being criminals.”

“The events happening in the US have sparked police accountability questions in Kenya,” said Robi Chacha, a human rights attorney who recently moved back to Nairobi from San Francisco. He’s worked on extrajudicial killing cases but says they rarely get the level of media attention seen in the US now.

“The cops are very clever in terms of hiding evidence and blaming these victims for being criminals,” he continued.

“Let’s take action against individual police officers who are erratic,” he said. “But let’s support the police, let’s not set the public against our police officers.” Owino denied that the man killed in Mathare was shot by police officers.

Years of pressure from community social justice groups, who have been documenting police killings and violence, has led to some police reforms and increased civilian oversight.

“The only concern for me and for many other Kenyans is why those do not reflect in just for these victims and their families as well,” said Chacha.