Never before have threats to US democracy been so grave, says political scientist 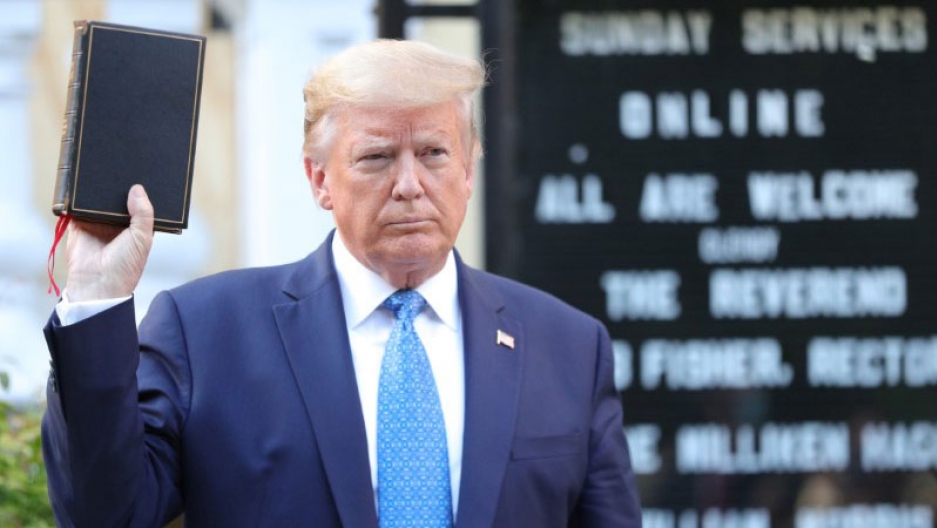 US President Donald Trump holds up a Bible as he stands in front of St. John’s Episcopal Church across from the White House after walking there for a photo opportunity during ongoing protests over racial inequality in the wake of the death of George Floyd while in Minneapolis police custody, at the White House in Washington, DC, June 1, 2020.

Tensions over race may seem at an all-time high, following the death of George Floyd, a 46-year-old black man who perished while in police custody in Minneapolis. But what makes this moment of national unrest especially significant, in a country with a long history of racial division, is that racism has become a threat to our democracy, according to scholars such as Suzanne Mettler, a professor of government at Cornell University.

It has “been like this underground stream through all of American history. It’s always there, kind of waiting to be tapped, and sometimes it comes to the surface more than others,” explained Mettler.

In this instance, racial conflict has been layered on top of an already deeply-polarized political system, “with one side insisting upon law and order … and the other side saying we need racial equality in the United States and police brutality is a huge problem and it’s against what the United States is supposed to stand for,” said Mettler.

She believes the way US President Donald Trump has used racial divisions for political gain, is similar to a period in the 1890s when the Democratic Party — with the support of white supremacists — tried to dominate the political scene in the South. In the mixed-race community of Wilmington, North Carolina, the results were far from pretty. There was rampant voter fraud followed by a coup d’état and a massacre on November 10, 1898.

The true story of the massacre was not told in student history books, according to David Zucchino, the author of  “Wilmington’s Lie: The Murderous Coup of 1898 and the Rise of White Supremacy.” He went to high school and college in North Carolina but never heard about the tragic events in Wilmington until the hundredth anniversary of the coup.

The story is of great interest to Mettler, who has also written about it, because of the way in which democracy was curtailed in Wilmington — much as it had been in the 1790s and in the lead up to the Civil War, during the Great Depression, during Watergate and now, she explained.

Mettler, the co-author with Robert Lieberman of Four Threats: The Recurring Crises of American Democracy, has identified four issues that have historically undermined American democracy. For the first time in US history, all four factors: expansive presidential power, political polarization, rising economic inequality and racism or nativism, are at play at the same time, the authors claim.

Related: The slow burn of a long-term slowdown

While the threats are not new, they are convinced that their confluence under Trump has led to the weakening of the very necessary checks and balances built into our political system. The pillars of American democracy, including the rule of law, the legitimacy of opposition and free and fair elections, are under attack now like never before, Mettler explained.

She is especially concerned about the forthcoming presidential election because of the added crisis of the coronavirus pandemic. “There’s just a lot more opportunity for politicians to then play with electoral rules and procedures in ways that could help them to gain advantage,” Mettler said.

The political scientist fears there could be hotly contested results in November and even violence. If Trump is re-elected, Mettler predicts damage to the integrity of civil rights and liberties and potentially the emergence of a so-called “competitive authoritarian regime” which only bears the “outer look of democracy.”

The fate of the country’s future has also been on the mind of presumptive Democratic nominee, Joe Biden who — in a recent speech in Philadelphia in which he criticized the president for his response to the protests against police brutality — condemned him for “sweeping away all the guardrails that have long protected our democracy.”

At the same time, Biden tried to offer hope by recalling how, during some of the darkest moments of despair in US history, the nation has made some of the greatest progress. Still, it may be a while before we can see what progress, if any, comes from this difficult moment.