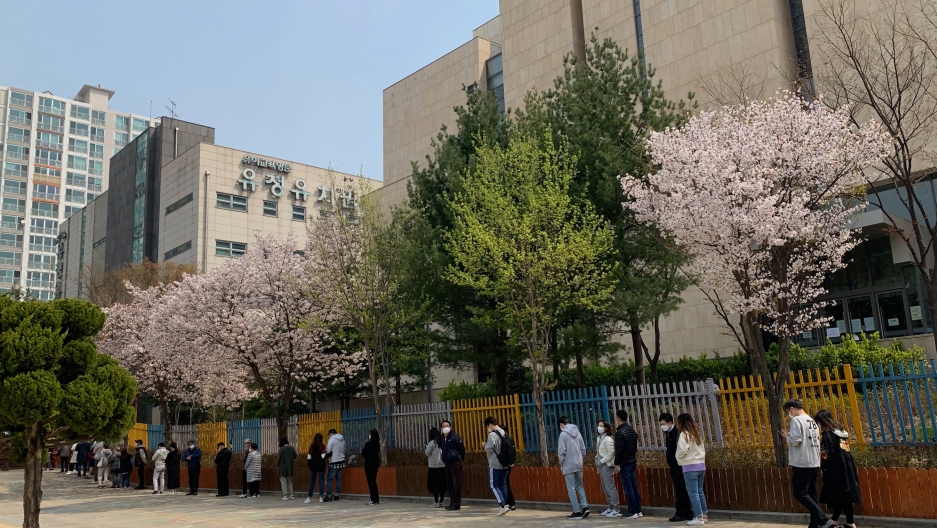 Voters in South Korea line up to cast their ballot in the election.

After winning praise from across the globe for mitigating the spread of the novel coronavirus, South Korea has held parliamentary elections despite concerns that rolling back distancing and quarantine measures could expose voters to the disease.

The rising number of coronavirus infections and deaths worldwide has prompted dozens of nations to postpone scheduled elections. Other governments have faced criticism for putting citizens at risk by not calling off their polls — such as during the April 7 primary elections in Wisconsin.

Related: Is South Korea’s approach to containing coronavirus a model for the rest of the world?

On Wednesday, at least 29 million South Koreans lined up at polling places to cast ballots for the 300-seat National Assembly — a vote that was widely seen as a measure of public support for the government’s response to the pandemic.

While Seoul has not imposed shelter-in-place orders since the crisis began, a nationwide social distancing policy remains in place until April 19. But on election day, as well as two early voting days last week, some of the official guidance — such as maintaining six feet of space from others and avoiding crowded spaces — was eased to allow the election to take place.

Additional precautions were adopted to reduce the potential for infection. At polling locations, all voters were required to wear masks and stand just three feet apart from each other. Officials checked their temperatures and applied hand sanitizer on each voter before giving them disposable plastic gloves to handle the paper ballots. 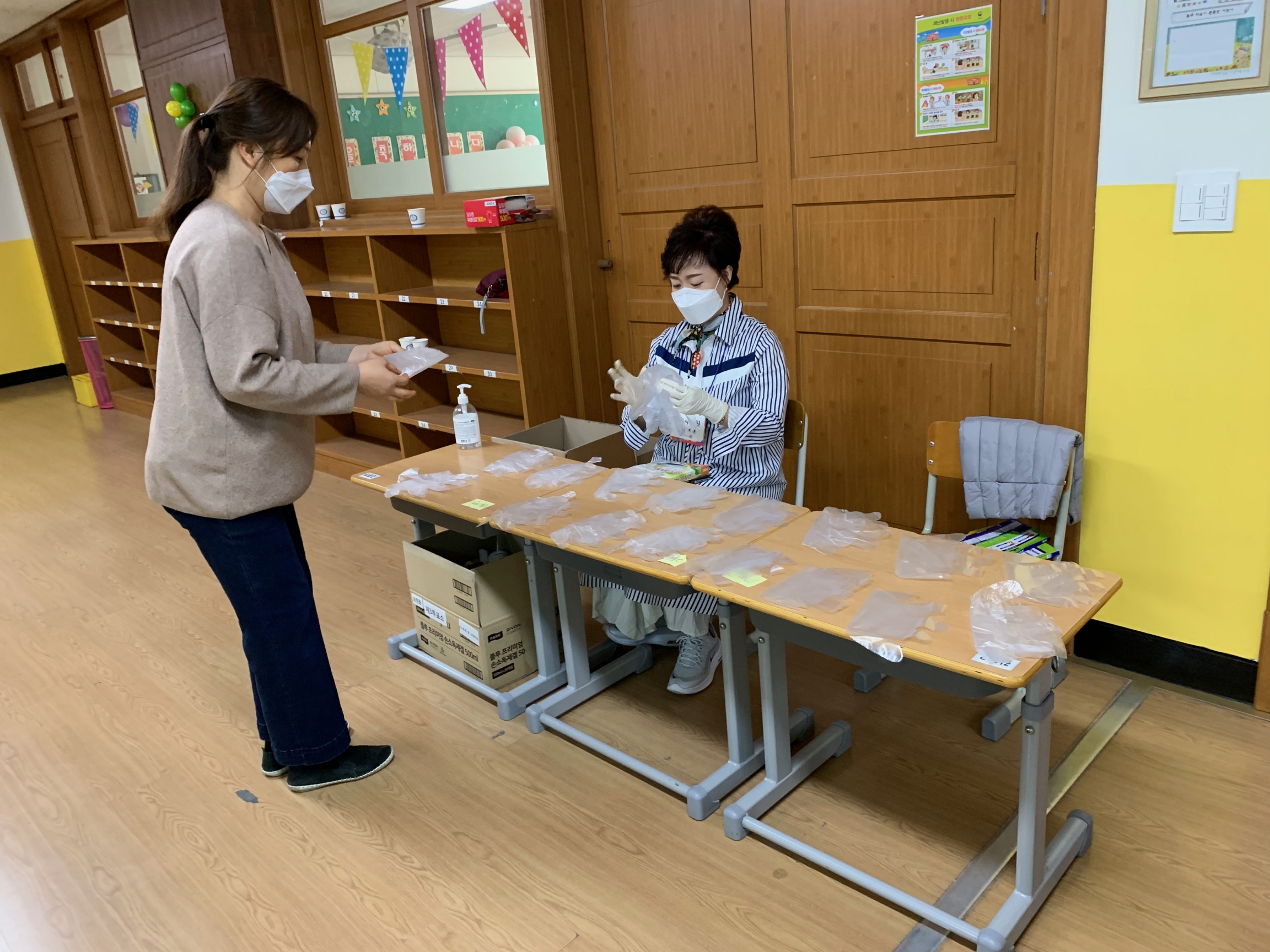 At a polling station, two people prepare gloves and hand sanitizer for voters casting ballots amid the coronavirus outbreak in South Korea.

Stations were also set up at medical centers to allow coronavirus patients to participate in the vote.

Walking underneath a row of blossoming trees alongside a high-rise apartment building, Lee Sa-rang and members of her family waited for about 45 minutes to enter their local polling place — a now-shuttered elementary school in Yongin, a city just south of Seoul. 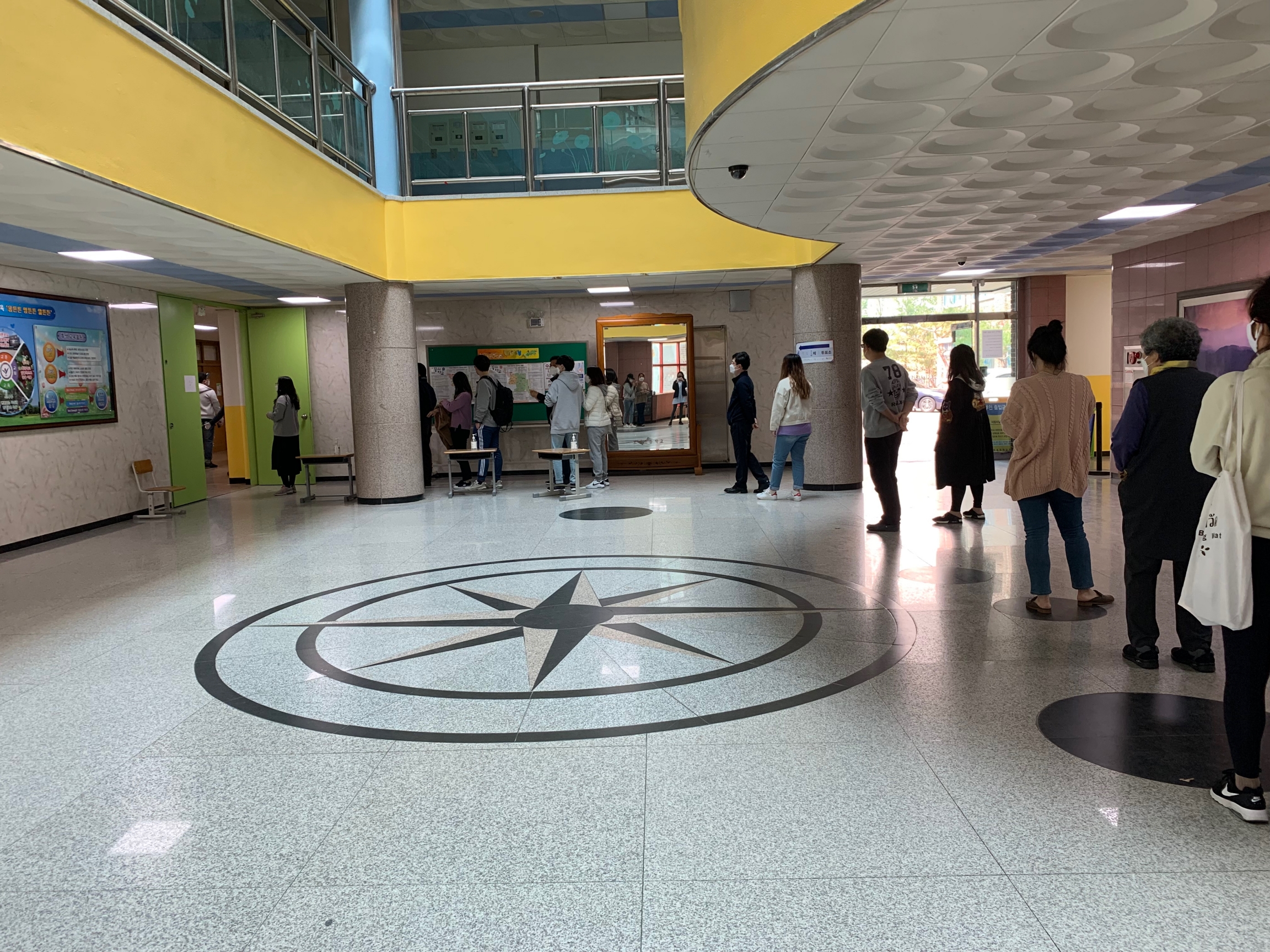 Voters lined up inside a school to cast a ballot.

Lee, who works in private education, says that as the number of COVID-19 cases here continues to decline, she feels it was safe enough as well as important to cast her vote now.

“Everyone is taking their vote very seriously,” the 32-year old said.

“Everyone is taking their vote very seriously. … Life needs to go on.”

“Life needs to go on,” Lee said, adding that voting signifies a return to “normalcy” for Korea and that the way in which the country’s leadership has confronted the coronavirus “reaffirmed” her support for the ruling party.

Voter turnout was at a 28-year high, according to media reports. South Korea, which experienced a large-scale COVID-19 outbreak in February, has since flattened the curve thanks in part to widely available diagnostic tests and a technological infrastructure that has allowed for rapid contact tracing of infections.

Some observers say candidates affiliated with President Moon Jae-in’s Democratic Party, which recently adopted the slogan “We protect the people — we’re winning the battle against the coronavirus,” have campaigned on this success in order to win spots in the National Assembly.

“They’re saying we’ve handled this pandemic better than any other country in the world. … This public relations campaign will help the ruling party.”

“They’re saying we’ve handled this pandemic better than any other country in the world,” said Gi-wook Shin, director of the Walter H. Shorenstein Asia-Pacific Research Center at Stanford University.  “This public relations campaign will help the ruling party.”

Exit polls show the Democratic Party with a strong lead over the main conservative opposition. The final vote tally will be released on Thursday.

The Korea Centers for Disease Control reported on Wednesday that for the third consecutive day, new coronavirus cases slipped below 30, bringing the country’s total number of infections to 10,591. More than half of all patients have already been released from medical care, government data shows.

Deaths attributed to COVID-19 have reached 225, according to the KCDC. But officials are still concerned about cluster outbreaks inside churches and hospitals as well as infections linked to Koreans who have recently returned from abroad. Since April 1, all inbound travelers are required to self-quarantine for 14 days.

Before leaving the airport, new arrivals must install a smartphone health check app, which allows authorities to identify COVID-19 symptoms as well as track the movements of users.

On election day, quarantine restrictions were temporarily lifted and polling stations were kept open to allow some 13,000 recent returnees to briefly leave their homes and vote.

“It’s too hasty to conclude that the coronavirus is gone. … The election should have  been postponed.”

“It’s too hasty to conclude that the coronavirus is gone,” he said. “The election should have  been postponed.”

Hwang fears that South Korea could see another spike in new coronavirus cases.

Surveys leading up to Wednesday’s polls showed strong approval for President Moon, which was not the case prior to the start of the pandemic, due in part to a sluggish economy.

For some voters, the election was a chance to show their frustration with his other policies.

“The cost of living has gone up too high under this administration,” Kim Hyeong- jun, a 60-year old businessman said after casting his vote in Yongin. “The government raised the minimum wage and that’s hurting the owners of small companies.”

The coronavirus has only exasperated some of South Korea’s pre-existing economic problems, with government figures showing a sharp rise in unemployment claims as well as a drop in new job creations.

Stanford’s Gi-wook Shin says these concerns could have cost the ruling party some seats in the National Assembly.