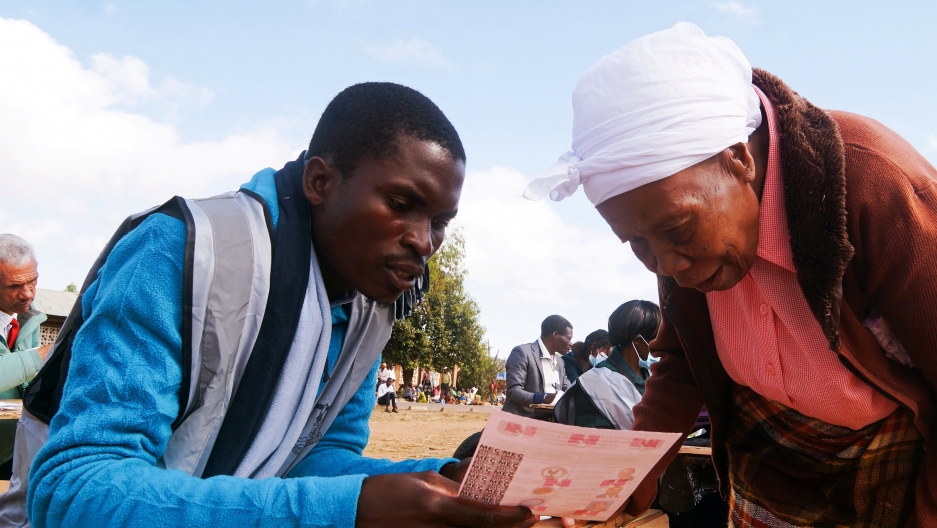 A Malawian woman waits to vote in a rerun of a discredited presidential election in Thyolo, Malawi, June 23, 2020.

As countries around the world debate how to move forward with national elections amid the coronavirus pandemic, millions of Malawians head to the polls on Tuesday to vote for president —  again.

Earlier this year, the country’s constitutional court nullified the results of its presidential election in May 2019, when incumbent President Peter Mutharika narrowly won another term in office.

Malawians took to the streets to protest the results and reelection of Mutharika, who has been in office since 2014.

“The court even says let’s nullify the elections because there were vast irregularities that affected the will of the people.”

“The irregularities ranged from the use of different tally sheets [to] the correction of errors,” said Tadala Peggy Chinkwezule, president of the Women Lawyers Association of Malawi.

“The court even says let’s nullify the elections because there were vast irregularities that affected the will of the people,” Chinkwezule said.

In February 2020, in a 500-page ruling, the courts took a rare step to nullify the elections, ordering a new one within 150 days. They determined that candidates running for office would need at least 50% plus one of the votes.

Voters like Jane Mtika, a party vendor in the capital city of Lilongwe, appreciate the second chance at a fair vote. She plans to vote for Chakwera, who is now backed by a coalition of eight opposition parties and is running on improving the economy and bringing jobs to Malawians.

“I hope Chakwera and Chirima will do whatever they can for us business service providers,” she said, arguing that the coronavirus pandemic and countrywide lockdown has worsened poverty and hunger.

“We are now starving, we don’t have money. We are just staying at home. Our workers are at their homes. That’s not good,” said Mtika, who first spoke about her struggles to The World back in April.

Related: Libyans are caught between coronavirus and conflict

Boniface Dulani, a political scientist at the University of Malawi, says many Malawians are fed up with the leadership of President Mutharika, whose time in office has been marred by corruption scandals.

“The economy is certainly in a very, very bad and very fragile state. Our dependence on agriculture in times of increasing drought remains a big challenge.”

“The economy is certainly in a very, very bad and very fragile state. Our dependence on agriculture in times of increasing drought remains a big challenge,” Dulani said.

The election rerun also hasn’t been without its challenges and controversies.

“Apart from the logistical issues, including ballots, there are also other issues related to the financing of the election. The government has been quite reluctant to release funds to the electoral commission,” Dulani said.

In recent years, recurring droughts and natural disasters have contributed to food insecurity in Malawi. More than 50% of the country lives below the national poverty line.

Chifundo Kachale, the new election commissioner tasked with managing the election, was only appointed two weeks ago. Voting ballots printed abroad only arrived in the country on Friday.

The pandemic has also brought worries that the large campaign crowds and election could lead to a spike in the coronavirus in a country that has so far seemed to manage the relatively few cases.

It has also prevented outside election observers from entering the country. Still, lawyers like Chinwezule say they will be at the polls to make sure things are on the right track.