In Portland, Maine, high schools are infusing North African flavors into school lunches as the district experiments with being more inclusive of its diverse student body.

Sample portions of chicken and kale stew over rice. The dish was based on North African cuisine, and was the third meal offered to Portland, Maine, high school students as part of the semester project to test new dishes.

In the kitchen at Deering High School in Portland, Maine, Khadija Ahmed showed half a dozen food service workers how to cook a meal not often found in statewide school menus: chicken and kale stew, a common dish in northern African countries. 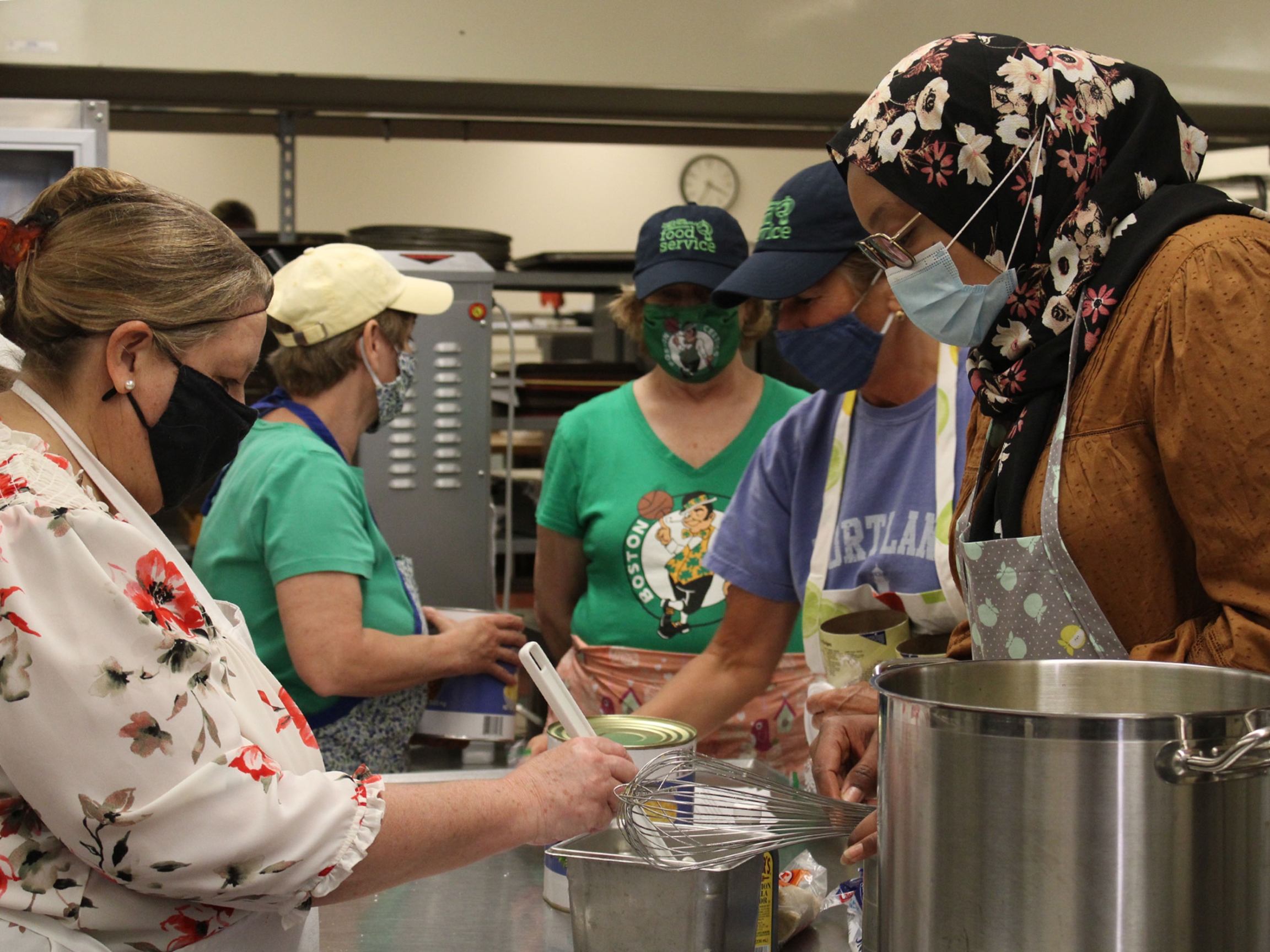 Ahmed, who is from the Democratic Republic of Congo, works at Good Shepherd Food Bank and runs an African grocery delivery business.

She also created the recipes for this districtwide effort to broaden meal options at high school cafeterias. She said they're based on dishes that she makes for her own children — a mix of African and American flavors and ingredients.

Every day, millions of students in the US eat free or low-cost meals offered under the National School Lunch Program. The offerings have to meet minimum nutritional guidelines, but they often lack a certain imagination. In some districts, however — including the public school system in Portland — that’s starting to change.

Maine might seem like an unlikely place to test run school lunches based on regional African cuisines. After all, it’s still the whitest state in the country, according to the 2020 Census. But Portland, the state’s largest city, is home to a growing number of immigrants from Angola, the Democratic Republic of Congo, Burundi and Rwanda. Students there speak more than 50 languages. 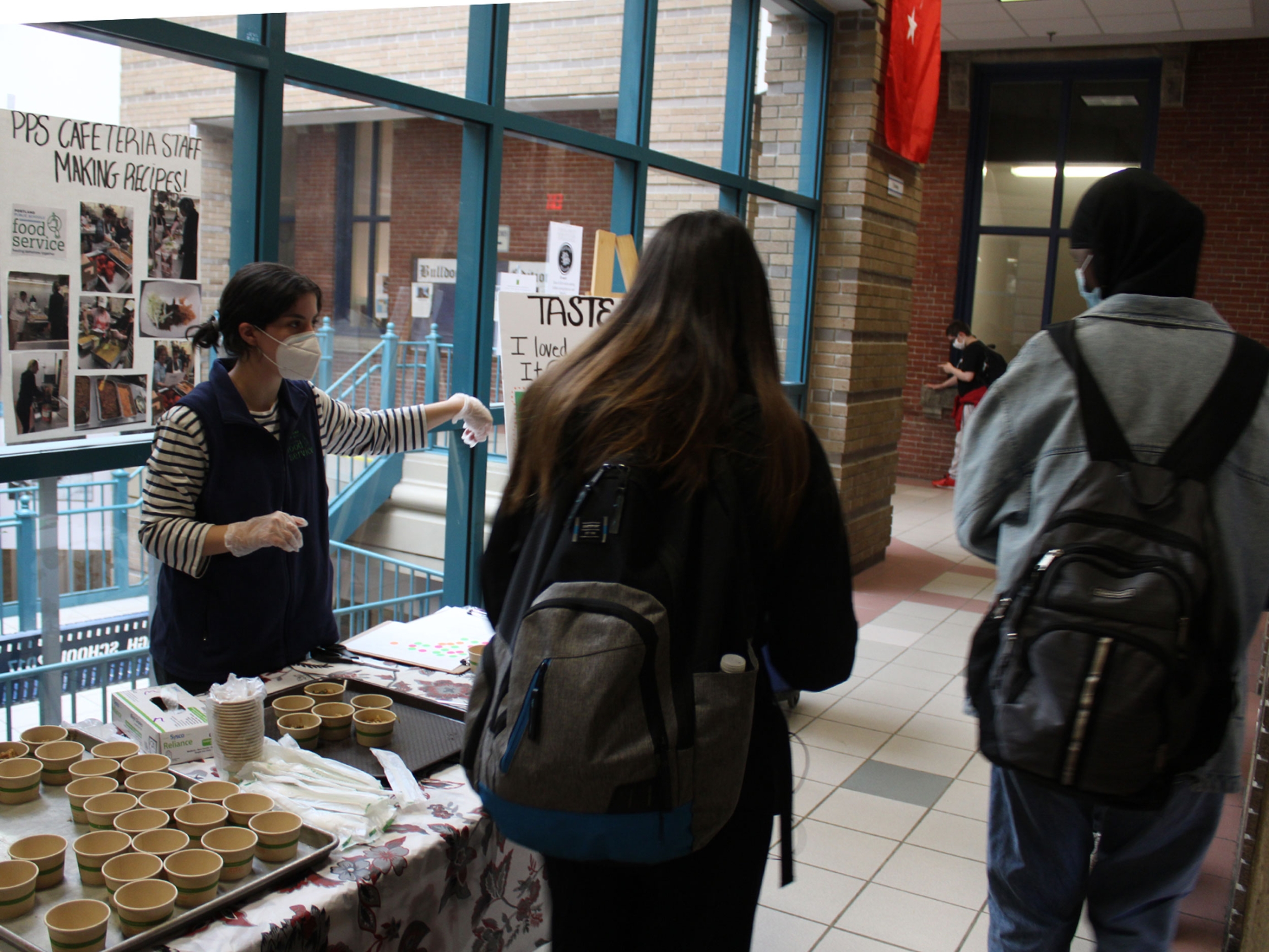 Zoe Grodsky, left, with the Cumberland County Food Security Council, talks with students at Portland High School in Portland, Maine, during the final taste-testing event of the semester.

Thomas was born in Gabon, but she went to school in Portland and remembered eating a lot of hot dogs and breaded fish.

Related: The Korean Vegan reflects on food, family and life 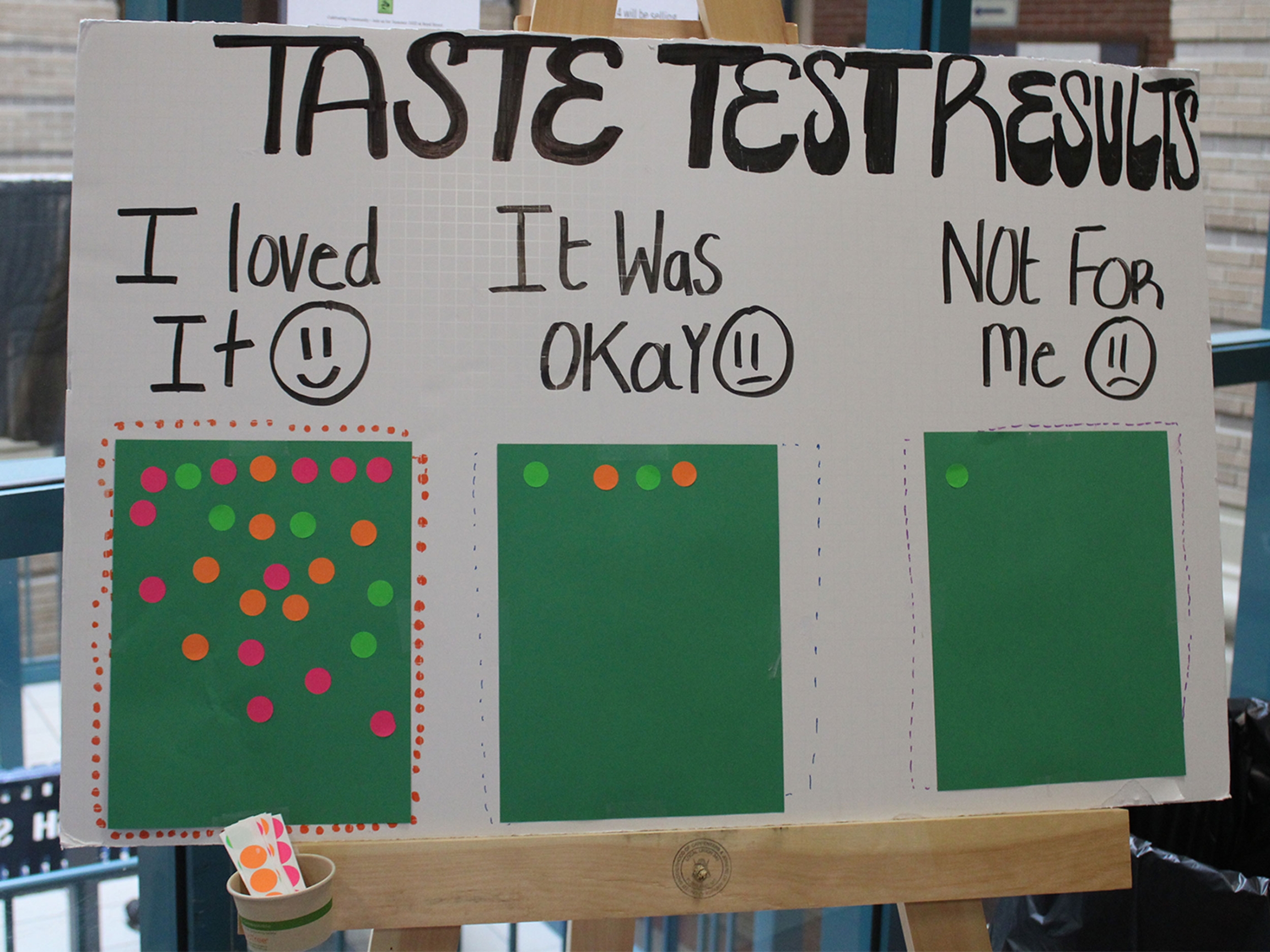 Students were asked to give feedback on the dishes through focus groups, written responses, and by voting on boards like this one at Portland High School in Portland, Maine.

Getting more students to participate in school meals depends, in part, on drumming up support at districtwide taste-testing days, like the one held recently at Portland High School.

Rosa Pedro, who is from Angola, is a freshman at the school. She said she’s eaten her share of french fries and pizza. So, she’s happy to give the chicken and kale stew a try.

“I love it,” Pedro said. “Just needs a little more salt and stuff like that, but I love it.”

Related: This artist wants you to take a bite out of art history

“School meals, including both breakfast and lunch, are a huge [part] of food security,” she said. 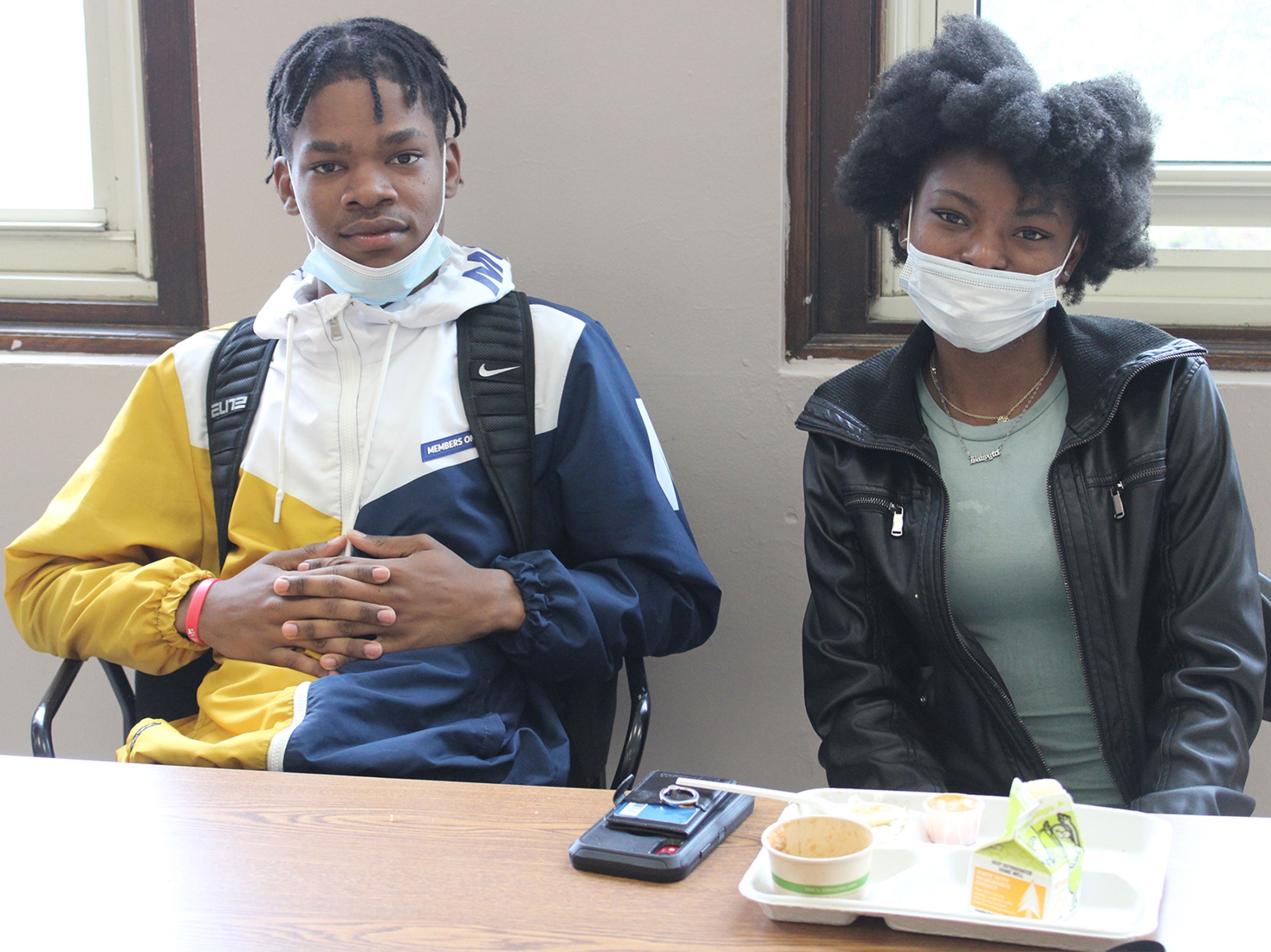 Jose Kiala, left, and Raquel Samuel, students at Portland High School in Portland, Maine, pose for a photo in the school cafeteria. Samuel, who is from Angola, said she liked the chicken and kale stew, and wants the district to serve more food from other cultures on a regular basis.

Chaleff led this project — and said that one of the goals was to reduce the stigma associated with school meals by providing options that everyone can get excited about.

"We really want students to be enjoying that and choosing to take it and getting a delicious and well-rounded meal that meets everyone's nutritional needs.”

“So, we really want students to be enjoying that and choosing to take it and getting a delicious and well-rounded meal that meets everyone's nutritional needs,” she said.

Chaleff is also hoping the district can begin incorporating halal meat —which is prepared according to Islamic dietary laws — into its dishes. She said that this will help ensure that Muslim students have the same access to school nutrition programs.

“Because I know that's still a barrier for students to feel like they can participate in school lunch,” she said. 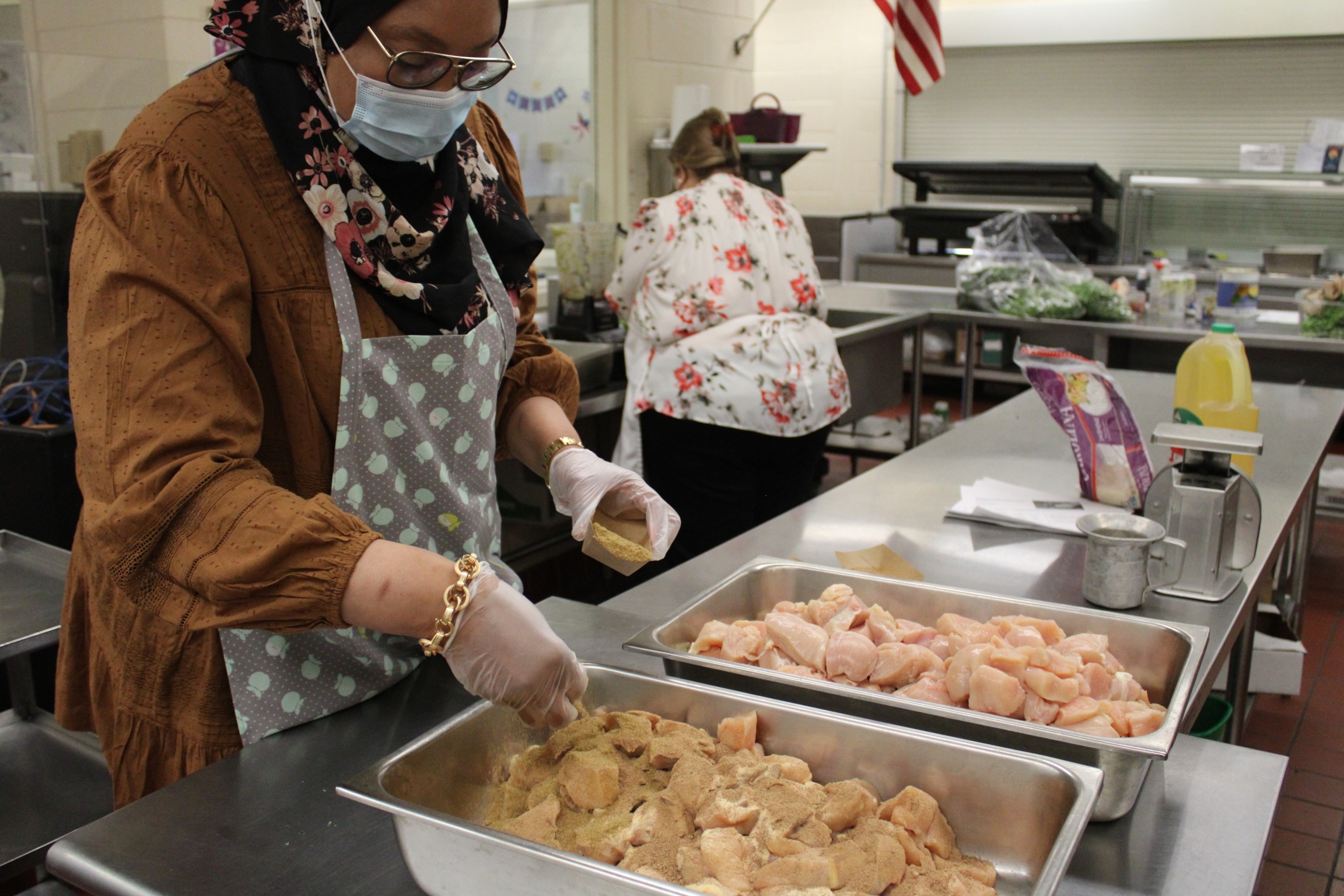 Chef Khadija Ahmed sprinkles spices on sliced chicken breasts that will be used in a stew inspired by North African cuisine. Ahmed says she based the recipes for this project on meals she makes for her own children — merging African and American flavors and ingredients.

After the most recent taste test event, 85% of students who tried the chicken and kale stew gave it a positive review. But Chaleff noted that many high schoolers chose not to try the dish at all.

They will have plenty of opportunities, though, to sample new meals next fall. Based on the positive feedback from this semester, Portland Public Schools will soon be serving up jollof rice, spiced beef, cornmeal porridge and other African-inspired dishes.

Ahmed said that she hopes the recipes she’s created can be a sign of welcome for new immigrants arriving in the district.

“So, we welcome you. Guess what? We know what you like,” Ahmed said.

Starting school in a new country, in a new language, is hard enough, she said — maybe lunch, at least, can offer a taste of something familiar.