Lebanese protesters are back in the streets with increasing desperation as the country sinks.

Police in riot gear stand in a line as protesters block a main road in Beirut, Lebanon, May 2020.

In the narrow streets of Beirut’s Bourj al-Hammoud neighborhood, Baruyr Solakian sits outside a small shop. On a small portable radio, he listens to the local news — and it’s not good.

“No one is working and there is no money, no food. … Many families go to sleep without eating.”

“No one is working and there is no money, no food,” said Solakian. “Many families go to sleep without eating.”

Neighborhoods like this one have been hit the hardest in Lebanon’s crisis. Like many in the country, Solakian was just scraping by. His work as a security guard earned him enough money to pay rent and feed his family of five. 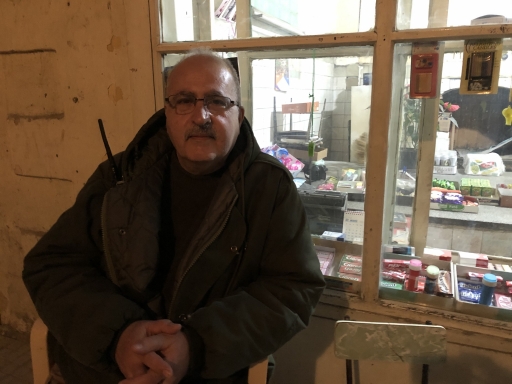 As the financial crisis hit in the fall —sparking the first wave of protests — things got harder, but he managed.

Now, Lebanon’s currency is in freefall. That means inflation is rising so quickly that the prices of some goods change overnight. The Lebanese currency was pegged to the US dollar at 1,500 lira for decades, but earlier this year it doubled to 3,000 on the black market.

Then came the novel coronavirus pandemic. In March, experts warned that an outbreak in Lebanon would be a disaster. The country locked down fast and the infection curve flatted quickly — but inflation did not.

“I bought milk for 5,000 lira. After one week I bought it for 10,000,” Solakian said. Prices are going up but salaries for most Lebanese are not.

“If they didn’t shut down there would be much more illness, that is for sure,” said Solakian. “But the people are poor.”

Late last month, just as the country announced it would be easing the lockdown, the Lebanese lira jumped to over 4,000 lira to the US dollar, and the prices of food and other goods also jumped. Those who were just scraping by could no longer sustain their lives. And people took to the streets again.

Lebanese citizens have been on the streets since October demanding an end to corruption and a new, non-sectarian political system. But now the protests are about survival for the most vulnerable.

In the northern city of Tripoli, protesters smashed and burned banks and clashed with security forces.

Before the pandemic, the World Bank estimated that 45% of Lebanese could soon be below the poverty line. Now the Lebanese government has put that prediction over 70%.

At a protest in Beirut last week, a crowd blocked the main road. “Some people are dying because they don’t have a shelter to live in, food to eat,” said Mohamed Kaadan, a medical technician among the protesters.

He said, of course, he’s worried about COVID-19, but that the situation is becoming too desperate to stay silent. His salary as a medical technician has been slashed by more than two-thirds because of out-of-control inflation.

Some protesters were wearing masks, trying to keep a safe social distance between them.

Others were clearly not. They shouted in the faces of a row of police officers in riot gear as smoke rose from a nearby garbage pile, set on fire by the demonstrators. Another group of police officers handed out medical masks to protesters, some of whom are carrying gas masks — in case the police fired tear gas to disperse the crowd.

On a quiet day this week in Martyrs Square, which has held some of Beirut’s biggest demonstrations, Ghazi Alam al-Din sat chatting with a friend on the curb.

A year ago, he explained, he was making about 50-60,000 Lebanese pounds per day. Then, that was about $35 or $40. It wasn’t great, but it was enough to pay his rent, feed his family and even take them out once in a while. As the crisis hit in the fall and inflation rose, things got tougher. Then came COVID-19, and his work stopped completely.

“I’m not receiving any money from anywhere,” he said.

He pulled out his pockets to show nothing but a singular key, explaining that his wife and children now must stay with his in-law because he can not put food on the table. Thankfully, because of the holy Islamic month of Ramadan, a mosque near his house offers free meals in the evening, he said.

“Some days I go there to take food from them,” Alam al-Din said. “Sometimes people are nice and they give me food.” 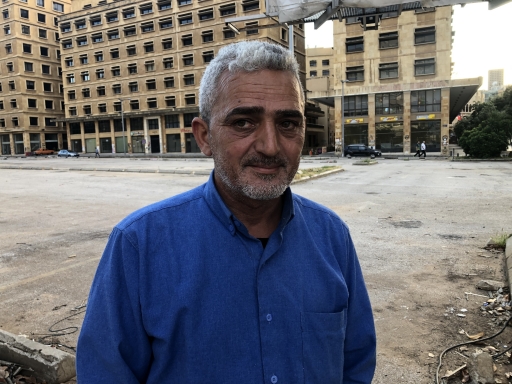 Alam al-Din’s face is pained as he tries to fight back the tears. He said the situation is tough for everyone now,  and that means friends and relatives can’t help. He said that he heard that Syrian refugees are even trying to flee Lebanon back into the war zone next door.

“Lebanon is a beautiful place. I want Lebanon to stand up on its two feet again,” he said. “I want it to go back to where it was in the past.”

But it’s hard to be optimistic.

Back in Bourj al-Hamoud, Solakian said the government has done almost nothing to help those suffering the double whammy of the financial crisis and Covid-19. Instead, he received a box of food from a local church — rice, oil and milk. He never thought he’d be taking handouts.

“When corona[virus] came, Canada, the United States, Europe, all the governments helped their people. They say ‘stay at home’ but they paid them,” Solakian said. “But here, there is no money.  No one helps us.”