A snow leopard sunbathes in the wild. As climate change pushes herders further up into Central Asia's mountains, encounters between livestock and snow leopards have become more common.

Last summer, Kuban Jumbaev received a text message from a herder in the mountains outside Bishkek, Kyrgyzstan, with pictures of a dead foal. In the dirt around the horse’s body, the herder found large, cat-like paw prints — signs of a potential snow leopard attack.

When snow leopards take down livestock, farmers often kill the cats in retaliation.

Jumbaev responds to calls from herders who lose livestock as part of his work with the international nonprofit Snow Leopard Trust, which works to protect the vulnerable species.

Related: North Atlantic right whales are shrinking in size as they struggle to survive environmental havoc

"When you have more livestock in snow leopard habitats, the rate of conflict between humans and wildlife increases, because livestock are easy prey for snow leopards."

"When you have more livestock in snow leopard habitats, the rate of conflict between humans and wildlife increases, because livestock are easy prey for snow leopards,” Jumbaev said. 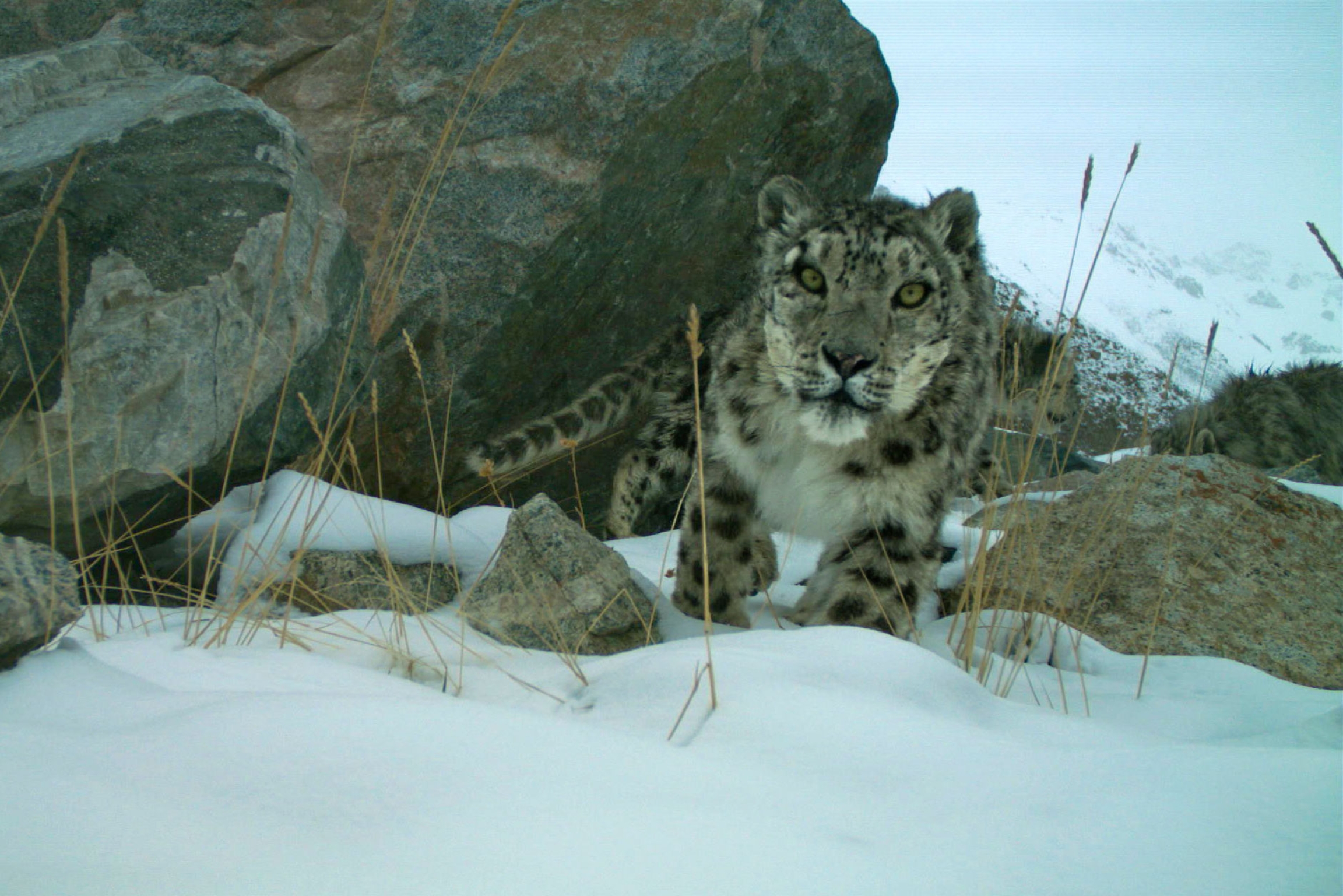 A snow leopard in the wild.

Snow leopards have roamed these remote parts of Central Asia’s mountains for centuries.

Prolonged drought has increased the number of encounters between livestock and snow leopards in some parts of Kyrgyzstan. In some regions, herders must now lead their animals deeper into the country’s mountains, where water and pastureland are more abundant.

The Snow Leopard Trust helps herders find ways to protect their animals from future snow leopard attacks, like building them new pens with enclosed roofs. In other parts of Asia, the organization has compensated farmers for their losses.

Snow leopards currently remain listed as a vulnerable species — there may be as few as 4,000 left in the wild throughout Central Asia, according to some estimates.

In addition to retaliatory killings, conservationists also cite poaching as a major threat. In the mountains outside Bishkek, researchers have only found 18 snow leopards. Losing just one or two leopards can decrease genetic diversity and lead to inbreeding, Jumbaev said.

As isolated snow leopards more frequently come into contact with livestock and humans, the potential for disease spreading may also increase.

Researchers have already identified potential pathogens, ranging from rabies to tuberculosis, that exist in leopard habitats and could jump between animal species.

“Clearly snow leopards are susceptible to getting the disease [COVID-19] and also are not very resistant once they have it."

“Clearly snow leopards are susceptible to getting the disease and also are not very resistant once they have it,” said Maarten Hofman, who works with the UN environment program’s Vanishing Treasures project, focused on the conservation of vulnerable animal species in the world’s mountains.

Big cats have proven remarkably vulnerable to COVID-19. Last summer, two lions died of the disease at a zoo in India. Four snow leopards succumbed to it at zoos in Lincoln, Nebraska, and Sioux Falls, South Dakota, in the United States, in the last two months.

“That would mean that similar herbivores in Asia could also act as a reservoir for pathogens and could actually trigger an outbreak or even pass it on to the snow leopard,” Hofman said.

Although snow leopards are small in number, their habitat extends over an extensive swath of mountains in Central Asia from northern India to Russia. Male snow leopards, in particular, cover large distances — and because the cats frequently socialize — it creates the possibility that pathogens could spread.

On a recent morning, Jumbaev visited Alim Saltavat, the herder who texted him the photo of the dead foal last summer in the small village of Salkyn Tor. Saltavat, 47, lost a foal and calf last summer. Together, the animals were worth about $600 — roughly three to four months’ wages for an average herder.

“We expect to lose some animals to leopards every year,” Saltavat said. “Here we call this the ‘mountain tax,’” he said chuckling. 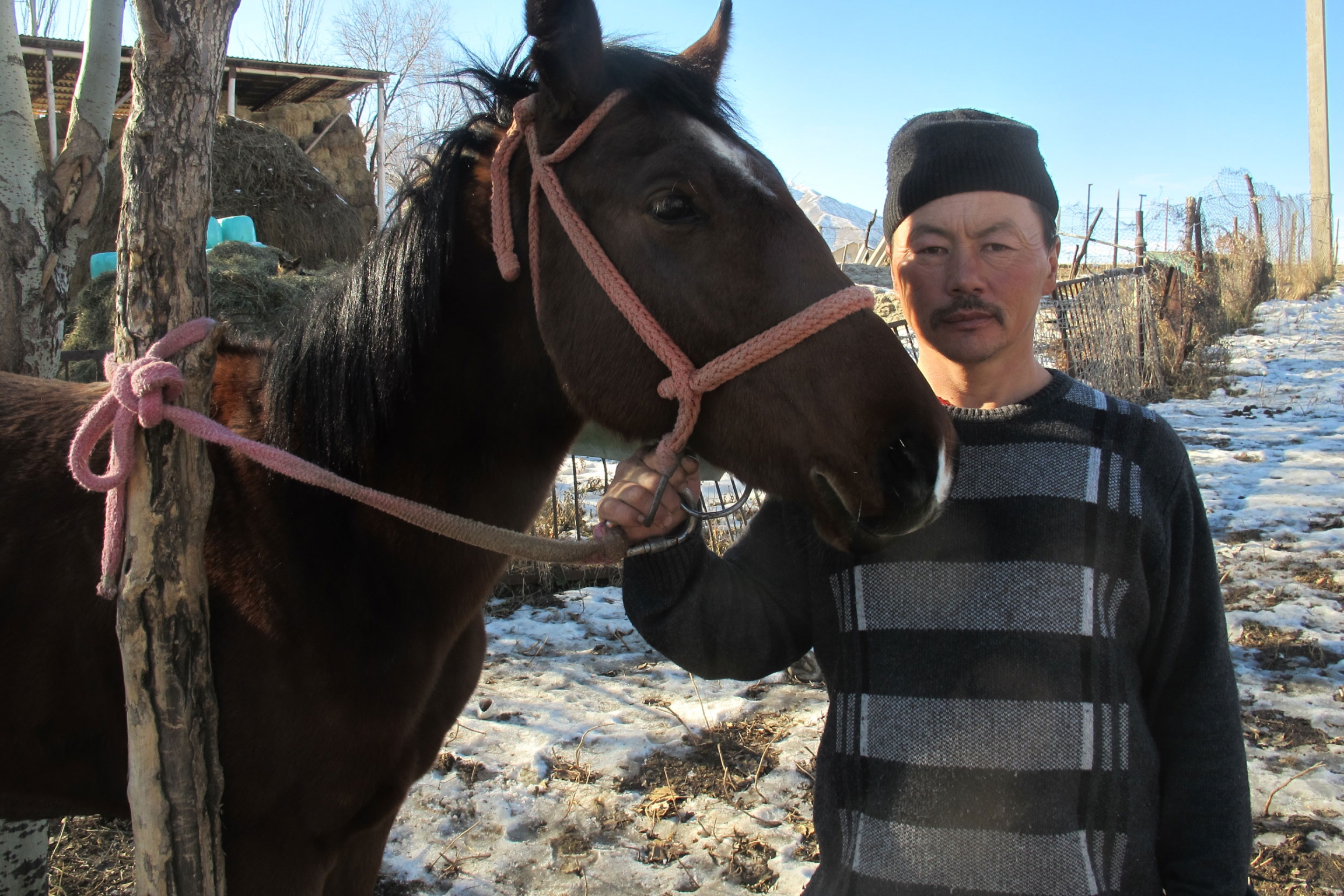 Alim Salavat, 47, of Salkyn Tor, Kyrgyzstan, lost a foal and a calf last summer to a snow leopard attack while herding livestock. As climate change pushes herders further up into Central Asia's mountains, encounters between livestock and snow leopards have become more common.

Emil Aralbaev, a herder in the nearby village of Besh-Kungey, who also said he loses livestock each year to leopards, offered a blunt assessment of the situation.

“Herders have no incentive to preserve the species."

Emil Aralbaev, local herder near the village of Besh-Kungey, Kyrgyzstan

“Herders have no incentive to preserve the species,” Aralbaev said, adding that he wished international wildlife organizations would help herders as much as they aid the leopards.

Hofman, with the UN, said there are many reasons to be optimistic about the future of snow leopards. He points to a recent memorandum of understanding signed by Kazakhstan, Kyrgyzstan, Tajikistan and Uzbekistan at the COP26 conference in Glasgow to start a coordinated multicountry effort to protect the snow leopard.

He also said there are very encouraging signs in local communities in Central Asia, where people have become more aware of the need to preserve healthy mountain ecosystems, in part because their own livelihoods depend on it.

“The challenges are still there, and it will take time to overcome them, but it is certainly worth putting in the effort,” Hofman said.

There’s also tremendous national pride in Kyrgyzstan's snow leopards, with images of them appearing on signs and plaques throughout the country. 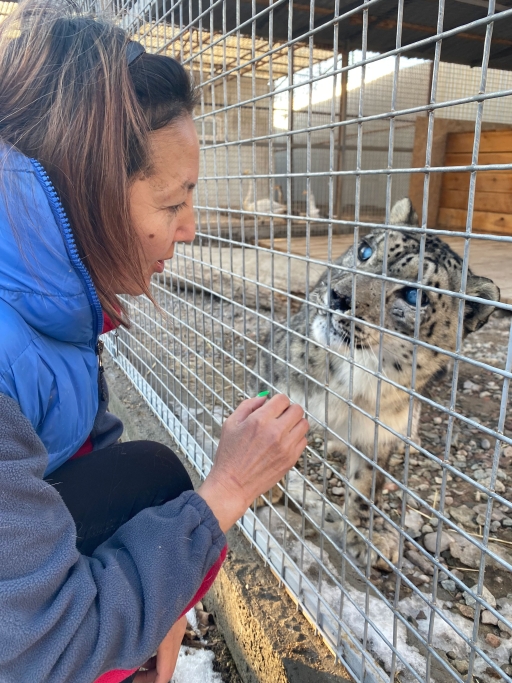 Basy suffered a severe injury when he was shot in the wild. Today, he is completely blind, with scars from buckshot pockmarking his face. Seitova cares for the leopard as well as wolves, lynxes and a bear that previously belonged to a circus, which she maintains with the help of donations in a big yard surrounding her home.

As Seitova nursed the snow leopard back to health, she said Basy exhibited signs of depression and had panic attacks. But he overcame the injury and learned to live with his blindness. Seitova said this leopard feels emotions that are strikingly human.

“I believe that inside he thinks and feels like a person,” Seitova said.

The connection that Seitova draws between people and leopards comes with an ominous sense of foreboding — just like humans, the cats are vulnerable to wide-ranging threats due to climate change.