class=”MuiTypography-root-134 MuiTypography-h1-139″>‘It’s absolutely ludicrous’: Traveler up in arms after being forced to take Ryanair’s Afrikaans-language test to fly

Dinesh Joseph, who is a South African-born leadership and management trainer based in London, was recently on vacation and was one of the people forced to take the test before boarding his flight from the Canary Islands back to the UK. He described the experience to The World's host Marco Werman.

Budget airline Ryanair says it's forcing South African travelers to the UK to do a test in the Afrikaans language to prove their nationality in an apparent effort to weed out those with phony passports.

Dublin-based Ryanair, Europe's biggest airline, mainly operates routes around Europe and doesn't fly to or from South Africa. It confirmed Monday that it's administering the quiz after reports about the test circulated over the weekend, sparking anger among travelers.

Regardless, passengers who do not complete the language test will not be allowed to board their flights. Despite a public outcry calling the procedure racist, the airline has said that it plans to continue using the test.

The World reached out to Ryanair for comment and the company responded with the following statement:

“The South African government has already warned passengers (and airlines) of the risk of syndicates selling fake SA passports, which has substantially increased cases of fraudulent South African passports being used to enter the UK. In order to minimise the risk of fake passport usage, Ryanair requires passengers on a South African passport to fill out a simple questionnaire in the Afrikaans language. If they are unable to complete this questionnaire, they will be refused travel and issued with a full refund instead. Airlines operating to the UK face Home Office fines of £2,000 [$2,502] per passenger for anyone who travel illegally to the UK on a fraudulent passport/visa. This is why Ryanair must ensure that all passengers (especially South African citizens) travel on a valid SA passport/visa as required by UK Immigration.”

Dinesh Joseph, who is a South African-born leadership and management trainer based in London, was recently on vacation and was one of the people forced to take the test before boarding his flight from the Canary Islands back to the UK. He described the experience to The World's host, Marco Werman. 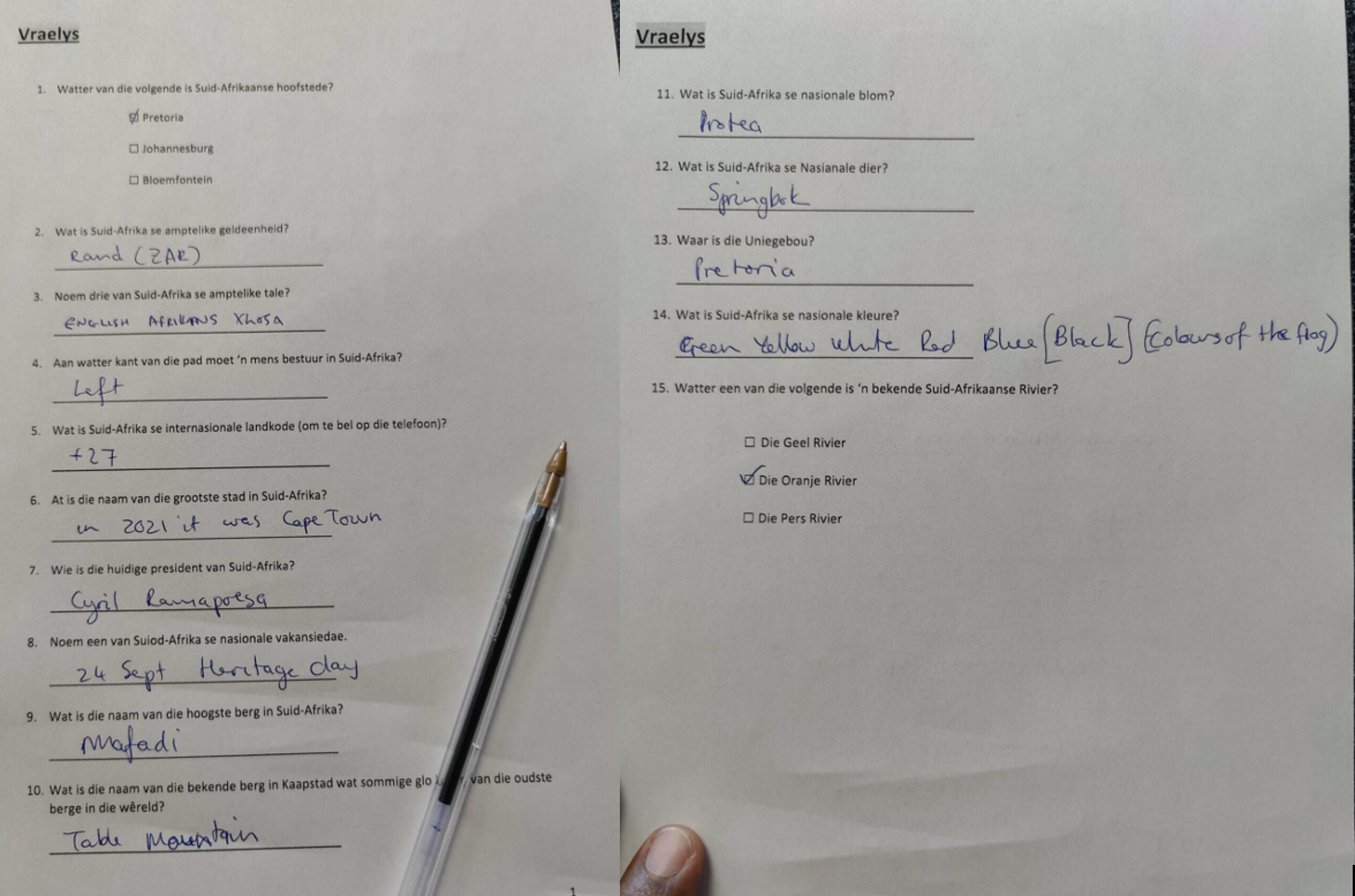 Images of Afrikaans test required for Ryanair passengers from South Africa traveling to the UK.

Marco Werman: Tell me how this all happened. How'd you find out you had to take a test? Where were you flying from and to?Dinesh Joseph: I was on vacation in Lanzarote, Canary Islands. A beautiful five days in the sun. I was asked to go to the baggage check-in and print my boarding pass. I wasn't allowed to check in online. Strangely enough, I was told to go to the Ryanair customer service desk. I just kind of made my way over to the service desk, gave my passport and gave the boarding pass in to get stamped. And in return, I was presented with this Afrikaans test.You're an English speaker, as you said. Do you have any Afrikaans under your belt?I mean, I grew up in apartheid South Africa, and Afrikaans was a mandatory language that we had to take at school. So, you know, I'm one of the people, but that was, what, 25 odd years ago? I just about passed it at school anyway. So, I had some basic understanding of the language, but I said to them quite clearly, "Look, I cannot complete this test or pass it without the use of Google Translate." You know, I have a very, very minimal basic standard of Afrikaans. And I think my face looked like I was about to go nuclear on them. So, they were like, "We don't really know what to say to you using Google Translate." So, I just picked up my phone and grabbed a pen and started translating and filling in the quiz as we went along.

Wow. What were some of the questions?Crazy. Yeah. So, some of the questions were really basic ones, like who's the president of South Africa? What's the highest mountain? What is your international dialing code? What side of the road do you drive on?So, you wrote a letter, I understand, to Ryanair. What did you write?Yes, once I got on the plane and I processed all of this and I arrived back home, I spoke to a group of close friends and my family. And everybody is like, "No, you've got nothing to be worried about, but this is wrong. This is not right. What is going on?" So, I logged on to their official complaints portal and let them know exactly the experience I'd gone through and that I wasn't happy about it.Have you heard back from them?Absolutely not. Not a word. There has been zero communication.

We know from Ryanair, they say this policy about taking this Afrikaans test was put in place because of the "prevalence of fraudulent South African passports." What do you make of that?I think it's absolutely ludicrous. I genuinely think it's ridiculous because if they're trying to prove that my passport is fraudulent or it's real to verify my identity, how will a general knowledge quiz about South Africa link to my passport? You know, on what planet does that happen? You've got to look at other evidence, like more rigorous evidence, like bank statements or my British residency card or my social security number — we call it a national insurance number here in the UK. There are a load of different other ways of verifying a person's identity. Getting them to fill in a test has absolutely no bearing or no relevance to my passport. If anything, it's going to prove how well I know my South African general knowledge and whether or not I can speak a foreign language.As a South African, what's your association with the Afrikaans language?Look, I'll be honest with you, I don't have a negative association with it personally. I've got nothing against the language of Afrikaans. However, it was the language of the white minority during apartheid times. It was something that you had to take when you were at school. It does bring back a lot of memories of things that have happened to me in the past, things that I can associate, basic racism, an unconscious kind of bias against you. It's quite triggering from that perspective. But you know what, for me, it's the ability to be able to make a choice — my choice of language is English. It's the language that I'm proficient in. I don't understand why they would want people to do it and why they chose that language. Who at Ryanair actually let this test out. And on top of it, Marco, if I can add on, the actual form itself looks like a grade two children's test. There are spelling mistakes, there are grammar mistakes in it. There's no Ryanair logo or administrative titles on it or anything of the sort. It's incredible.

This interview has been lightly edited and condensed for clarity.AP contributed to this report.