Is the US ready for the rising tide of mercenaries?

War is getting sneakier. And mercenaries could be changing war in ways that the US might not be prepared for.

A boy walks near his building, which was damaged during fighting between the Ukrainian army and pro-Russia separatists as an armored personnel carrier (APC) of the Ukrainian armed forces stands near by in Avdeyevka near Donetsk, Eastern Ukraine, June 7, 2015.

The Things That Go Boom podcast is a co-production of PRX and Inkstick Media, and is a partner of The World. This season on the podcast: What kinds of security risks are building out there? We’ll look at misinformation, shadow warfare and even ask if democracy is still in vogue.

In February of 2014, when war broke out in Eastern Ukraine, the top brass of the Russian army hatched a plan to support pro-Russia separatists fighting the government. Russia sent in what came to be called “little green men” — Russian soldiers, but in unmarked green uniforms.

And — they sent in a small band of mercenaries called “Wagner Group.”

Wagner Group only played a small role in the conflict, which led to the Russian annexation of Crimea. But the Russian generals deemed the mercenary experiment a success.

Today, these mercenaries could be changing war in ways that the US might not be prepared for.

Sean McFate is a professor at Georgetown University and a former paratrooper. He served under generals Stanley McChrystal and David Petraeus during his years in the US 82nd Airborne Division.

“But then I got out and went to, what they say, the dark side,” McFate said. “And I became a private military contractor, a paramilitary, some would say mercenary … to basically fight wars in Africa.”

Some of that fighting was for the US government — but some of it wasn’t.

“It opened my eyes to … how wars are being fought,” he said.

The situation in Ukraine in 2014, when soldiers in unmarked green uniforms began popping up in the conflict, is useful to understand what McFate means. Because the Kremlin wasn’t openly sending troops, what was happening on the ground didn’t immediately look like a war between Ukraine and Russia — and the international community only realized what was happening once it was too late.

“If they had blitzkrieged directly into Ukraine, there would have been huge international outrage, the UN would have gotten involved, and it would have stymied their progress,” McFate said. “In this way, they just kind of stole Eastern Ukraine.”

Episode 2: Was the US sleeping through China’s rise?

Why? If the Russian army takes a big hit, the Kremlin has a PR problem on its hands. If it’s Wagner contractors, the Russian government can deflect the blame.

“Plausible deniability” isn’t the only reason Russia is using mercenaries. At the height of the Cold War, the Soviet Union’s Red Army was the largest in the world — bigger, even, than the United States, though, the US Naval and Air Forces seem to have balanced things out. When the Soviet Union collapsed, Russia’s new economy and its military took a big hit.

But Russia seems to know how to stretch a limited budget a long way — that’s one reason why the use of mercenaries is such an attractive tool. Generally, private military contractors are considered cheap — you don’t have to pay for their training, employ them year-round, or pay veterans’ benefits, and in most cases, they come with their own weapons.

And Russia isn’t the only country using mercenaries.

Related: It’s time for the US to rethink Huntington’s philosophy: Part I

“This rising tide of mercenaries — eventually, in a decade or two, we’ll get to a point where war is privatized, where anybody who can swipe a big enough check can become a superpower,” warned McFate.

Of course, the US isn’t an innocent bystander. Blackwater, a private military company contracted by the US, caused a scandal in Iraq when contractors opened fire on civilians in the 2007 Nisour Square Massacre. 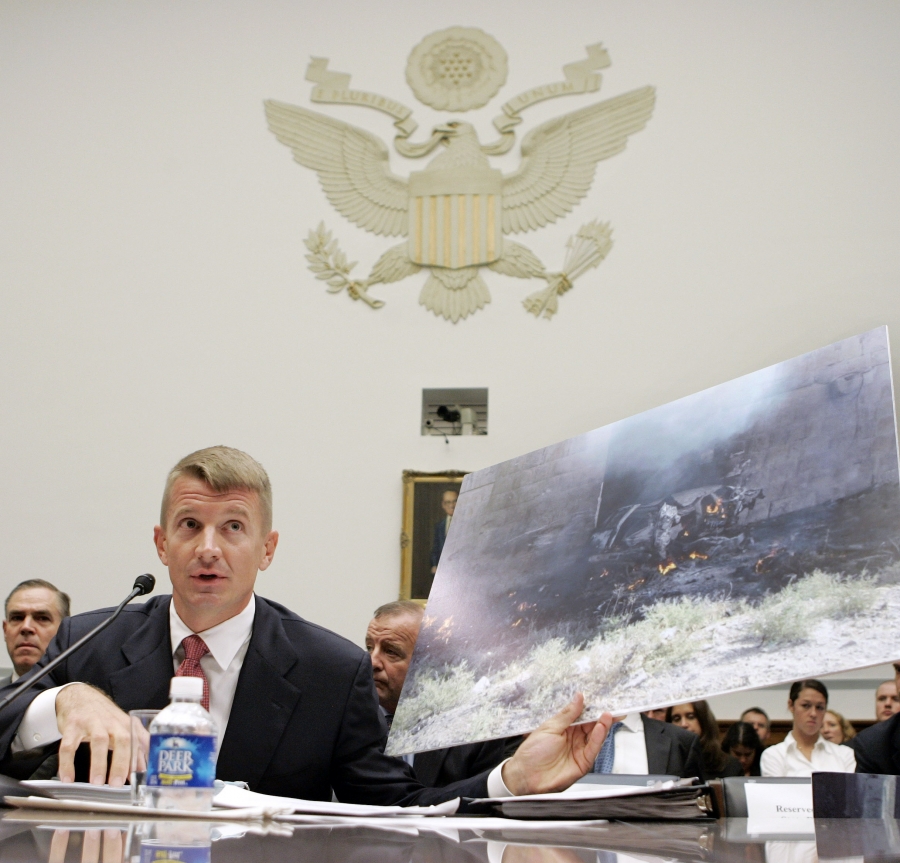 Blackwater Chief Executive Erik Prince holds a photograph of the remains of a blown up vehicle in Iraq while testifying before the House Oversight and Government Reform Committee on security contracting in Iraq and Afghanistan on Capitol Hill in Washington, October 2, 2007.

Erik Prince, the founder of Blackwater, has recently been pushing Washington to privatize the entire war in Afghanistan. Such a move wouldn’t likely save money, but there could be more menacing benefits. A Brookings Institution report found that contractor deaths are not listed on public rolls, and they’re rarely mentioned by the media. Plus, these firms aren’t subject to Freedom of Information Act requests, so hiding information from journalists is also much easier.

So far, the US hasn’t taken Prince’s advice — but it has signed more than 3,000 contracts with private military firms over the last decade, employing tens of thousands of people.

Most of these people aren’t armed mercenaries. They perform support tasks like training, cooking and delivering supplies.

But the problem is what happens when those contractors themselves need protection. The US Army doesn’t provide any armed help, so contractors often need to hire their own security. A Congressional investigation from 2010 found that one US contractor relied on Afghan “warlords, strongmen, commanders, and militia leaders, who compete[d] with the Afghan government for power and authority.”

In 2010, The New York Times wrote that there are strong suspicions that an Afghan company, which provided protection to NATO convoys, used American money to bribe the Taliban to attack those same convoys — just to make sure the demand for protection remained high.

A NATO official in Kabul said it most clearly: “We’re funding both sides of the war.”

Last season on Things That Go Boom: Nothing good happens after ‘nuclear midnight’

It might be terrifying to think of a world where individuals can go out and hire mercenaries. But we already live in a world where organizations like Wagner Group can fight wars more or less in secret.

So, how does the US military deal with this problem?

“When Americans think about war, our model for war is World War II. We call it ‘the good war.’ It’s what we teach in war colleges,” McFate said, adding that World War II still informs how American generals think about the future of war.

Right now, the US is still mostly stocking its shelves for the apocalypse — buying the kind of big, expensive things it thinks it might need for WWIII. But, McFate says, WWIII isn’t going to look anything like WWII. And US adversaries are investing their own resources completely differently.

“What they’re doing is they’re investing in other places, like the troll factory, their internet hackers, Wagner Group, other sort of clandestine means.”

And that means something in the US has to change.

“We don’t need to scrap … our superlative conventional forces. We have the best in the world, but we don’t need $13 billion new aircraft carriers either,” McFate said. “So, let’s stop throwing money into things that we’re already good at. Let’s throw money into things we need help in. And so, that includes strategic communication.”

A lot of the world has moved on to a new form of war — one it’s already actively fighting in the shadows. And the US is still sitting in its bunker, waiting for the blitz.

“What we need to do is we need to update the way we think about war,” McFate said. “If war is going underground to the shadows, we have to go into the ground and punch back. So, how do we fight secret wars, which is where warfare is today, and not lose your Democratic soul? That’s the discourse we should be having, not how many F-35s we need — that’s the discourse Lockheed wants you to have.”

This isn’t the whole story. To hear more, including what a hot dog salesman and actress Mia Farrow have to do with all of this, listen above and subscribe to the Things That Go Boom podcast.