class=”MuiTypography-root-133 MuiTypography-h1-138″>‘I had no life left here’: Iraqi Kurds are at the center of the migration crisis in Europe

Iraqi Kurds fleeing the semi-autonomous region in northern Iraq have made harrowing journeys to Western Europe. Now, many are being flown back to northern Iraq, often with little to restart their lives.

Yadgar Hussein recounts her perilous journey through Eastern Europe in her living room in Erbil after being deported from Poland, Nov. 24, 2021.

It’s been just weeks since Yadgar Hussein and her three children were deported back home to the semi-autonomous Kurdistan Region of Iraq after trying to migrate to Western Europe through Belarus.

“I have nothing left,” Hussein said, curled on a rug in the sparsely decorated living room of their apartment in Erbil.

They are among the thousands of Iraqis, mostly Kurds, who have taken advantage of Minsk’s easily acquirable visa policy in recent months, attempting to migrate to Europe through Belarus. Although northern Iraq is more prosperous than the rest of the conflict-scarred country, growing unemployment and frustration over corruption is forcing many to consider the risky journey.

Late last month, 27 migrants drowned when their small, inflatable dinghy sank in the English Channel — the deadliest incident like this to date on the dangerous passage between Britain and France. Most of those on board were Iraqi Kurdish migrants trying to reach Europe.

It’s part of a larger migration crisis that continues to unfold.

At least 8,000 migrants, many of them Iraqis, have entered the EU without authorization this year from Belarus. Lithuania and Poland declared a state of emergency at their borders to stop people from crossing. Rights groups say at least 13 people died, trapped in the border zone in sub-zero temperatures.

European Union officials blame the border crisis on the authoritarian regime of Belarus President Alexander Lukashenko, accusing him of using the migrants as pawns to retaliate for Western sanctions. Belarus denies this, blaming Europe for denying them safe passage.

‘I had no life left here’

For Hussein, migrating to Europe isn’t just about the fact that the family is struggling to make ends meet, but having a life of dignity and freedom — which she said isn’t possible in Kurdistan.

Hussein, a single parent, was married off at the age of 13 to her first husband, who died after stepping on a landmine. Her second husband left the family nine years ago, and she’s been stigmatized as a divorcee ever since.

“I had no life left here. I was in a really bad place. I was really tired,” she said, adding that she spends her time mostly confined to the home, unable to work.

So, she decided to leave.

Hussein’s savings covered much of the costs, along with the $10,000 she borrowed, but her 21-year-old daughter Bria Ali also contributed. Ali is an avid player of the online shooter game PlayerUnknown's Battlegrounds, known to most as PUBG, and managed to raise over $6,000 by selling two of her high-scoring user accounts. They used the money to fly to Istanbul, and then Belarus.

Ali hoped to meet the European friends she has made through the multiplayer game, where users fight to the death in ghost towns on a virtual island.

Although Kurdistan has been largely insulated from the violence that erupted when the US-led invasion toppled Iraqi dictator Saddam Hussein, Ali has had to face other profound difficulties, particularly as a young woman in the region.

Shortly before her family’s trip, her father had been pressuring her to get married to a man from a conservative family. When she refused, she said, he cut off his financial support for her education in petroleum engineering.

He also threatened to disown her — which would condemn her to a life of social isolation; Kurdish society places importance on the nuclear family.

“I wanted a future, a good future … We’re a bit different from people here — we’re a bit open-minded. And you can't be open-minded here.”

“I wanted a future, a good future,” Ali said. “We’re a bit different from people here — we’re a bit open-minded. And you can't be open-minded here.”

The women believe they would fit in more in a country like Germany, which they see as far away from the patriarchal constraints they currently live under.

“If a family doesn't have a man [in Kurdistan], freedom for that family is very difficult,” said Ali, who has personally seen how Hussein has struggled as a single mother.

So, the family waded through the cold dark forests of Eastern Europe, spending days without food, water and shelter — Hussein said they were misled by smugglers who told them it was the cheapest, easiest and safest route to the EU.

They made it from Belarus to Poland but were soon picked up by the authorities. The family was taken to court and told by an appointed lawyer that they had three months to claim asylum, but Hussein said that they were deceived by Poland. 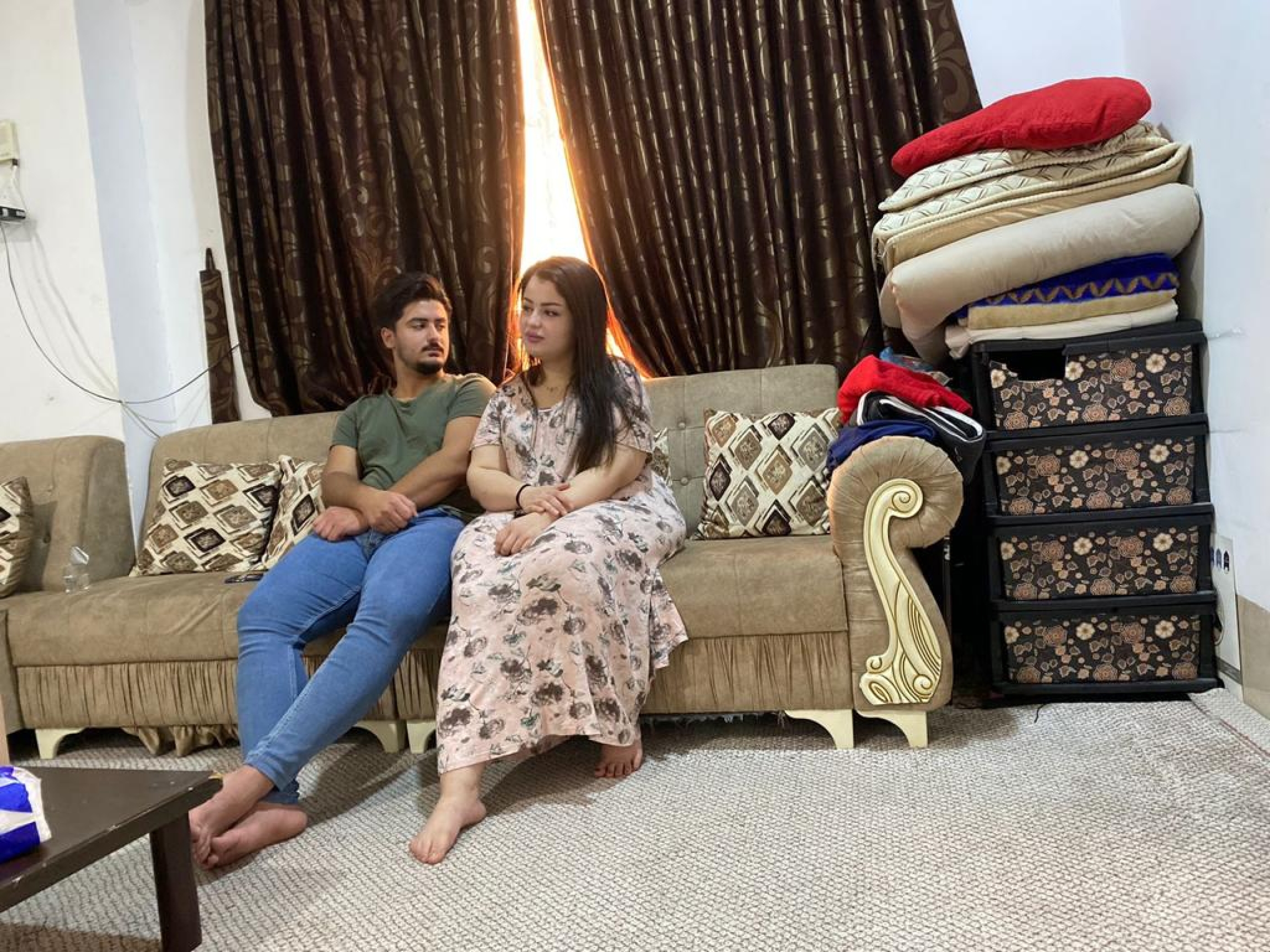 Bria Ali, 21, and Abdelrahman Ali, 19, discuss their future after being deported from Poland when trying to reach Western Europe, Nov. 24, 24, 2021. Credit: Yasmine Mosimann/ The World

She said that Polish security forces loaded them into a truck and told them that they were being transported to a holding facility, but instead drove them to an airport in Warsaw.

They laughed at her when she saw the plane and began protesting.

Now, back in the Kurdistan Region, the family is out of money and their future is uncertain, like so many others just back from Eastern Europe. Over 2,000 Iraqi citizens have been repatriated by Baghdad, and many others have been deported.

Related: Kurds grapple with US troop drawdown in Iraq

Financial pressure is now on Ali’s 19-year-old brother Abdelrahman, as the man of the house, to support the family. But like so many other men here, he can’t find a job.

Ari Jalal, the president of Lutka, a local organization in Kurdistan closely monitoring the migrant exodus, said that people’s main reason for leaving Iraq and the Kurdistan Region is economic.

Many of the country’s youth cannot find work, and those with jobs are largely employed in the bloated public sector, he said. Both the central Iraqi government and the Kurdistan Regional Government have found it difficult in recent years to pay meager wages to their public employees.

Related: In the wake of ISIS, Kurdish authorities are controlling religious messaging

Jalal said that this, combined with perpetual instability, insufficient social security, and disillusionment in the political system has contributed to people risking everything to build their futures abroad.

“It has tired people more and more, up to the point where they migrate to a more worthy life for themselves,” Jalal said.

For Hussein, who hadn’t yet heard about the migrant tragedy in the English Channel, leaving again is top of mind.

“Now, if I had enough [money], even if they warned that I would drown in the water, I would still do it.”

She said that drowning is better than her life in Kurdistan.

The Associated Press contributed to this report.