Low gas price for Serbs and its explanation

Serbia is Russia's last ally in Europe. At the end of last week, Sochi hosted the 20th meeting of the Presidents of Russia and Serbia, Vladimir Putin and Alexander Vucic. The main applied topic of the meeting was the extension of the gas contract with Belgrade at an acceptable price for the Serbs. For Vucic, this issue had not only economic, but also political significance – on April 3, 2022, presidential and early parliamentary elections will be held in Serbia. On them, the current Balkan leader is going to be re-elected for a second term – until the spring of 2027. And it has every reason for this – the Serbian GDP has been showing the best growth rates in Europe for the second year already, and the average salary in the country is approaching 600 euros (about 54 thousand rubles). 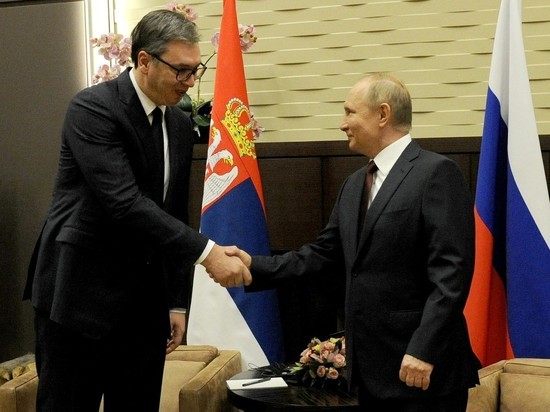 Vladimir Putin gave Aleksandar Vucic a truly royal gift – right during the meeting, he instructed the head of Gazprom to “find the best option for gas prices for Serbian friends.” As a result, after the negotiations, it became known that Gazprom would keep the current gas price ($ 270 per thousand cubic meters) for Belgrade for the next six months. After the price may be revised, but this issue will be discussed, firstly, in the spring-summer period, when world gas prices usually fall, and secondly, after the Serbian elections. The current price against the background of world indicators is the lowest in Europe.

Even Moldova, which experienced certain problems with gas supplies in November, ended up receiving $ 450 per thousand cubic meters. Only Belarus gets cheaper Russian gas – $ 138 per thousand cubic meters. There are clear political grounds for this – nevertheless, we and the Belarusians, albeit formally, live in the same Union State … At the same time, world prices for “blue fuel” beat all records and reach $ 1100 for the same volume.

In response, the Serbian president promised to purchase additional volumes of Russian weapons – by the end of this year Belgrade will receive Russian Kornet anti-tank missile systems, which, in turn, could not but cause “concern” in Washington. Also, according to insider sources of Balkanist.ru, Vucic raised an extremely ambitious topic at the meeting – the construction of its own nuclear power plant in Serbia. The fact is that the Serbs do not have enough energy of their own. In a rapidly recovering economy after 20 years of stagnation, this is becoming the main condition for continued growth.

Therefore, low prices for gas and its own electric power industry, primarily nuclear power, are vital for Belgrade. We may recall that back in 2008–2010. Serbia was the second fastest growing country in Europe. Meanwhile, Rosatom has become the last of the major Russian corporations to open a representative office in Serbia this year. So the probability of participation of Russian specialists in the design of the first Serbian nuclear power plant is quite high.

Of the 90 questions voiced by Vucic, put to him by Putin during the three hours of negotiations at the Bocharov Ruchei residence, some probably related to the situation in Kosovo and Metohija. This formerly Serbian region unilaterally proclaimed its independence on February 17, 2008, at the moment it is recognized by less than half of the UN member states, however, a compromise solution to its fate, which suits everyone, is not yet visible. On the one hand, this is Serbian Jerusalem – in terms of the number of church monuments and Orthodox churches, this is the most densely built-up part of Europe.

From here came the Serbian epic, “from here the Serbian land went.” On the other hand, there are only less than 100 thousand Serbs left there – from 5 to 7 percent of the local population. And these people in Albanian Kosovo are significantly infringed on their rights, they are practically second-class citizens. Any initiatives of Belgrade to somehow resolve their situation are blocked by the official authorities in Pristina. Even the theoretical plan for the exchange of territories – the Serb-populated north of Kosovo in exchange for two Albanian communities in the south of Serbia – provoked rejection of the Kosovars, proceeding from the principle “everything is ours, and what is not ours, we will take”.

So, this year, for the first time when budgeting for next year, Pristina officially provided more than two million euros for “assistance in the integration” of its Serbian co-religionists in the Presevo Valley in southern Serbia. It is almost as if the Russian budget had officially allocated funds for the integration of Russians in Odessa, Kharkov and Dnepropetrovsk. But Moscow cannot afford this. In contrast to … Pristina, obviously, has adopted a similar experience from Ankara. Only in October did the scandal over the denial of cars with Serbian numbers by Kosovar border guards end – then, for the first time since Yugoslav times, Belgrade deployed an army stationed at the very border with Kosovo. At that time, in the end, everything worked out, but it's not a fact that it will work out the next. Therefore, the main issue of achieving peace and stability in the Balkans is a compromise between Serbs and Albanians.

It will work out for them – with a high degree of probability, it will work out for everyone else. However, everything would be too simple if there was no external factor not interested in stability in the Balkans. And this factor is the United States, thus controlling the situation in the underbelly of Europe. Until 2003, the Russian peacekeeping contingent was located in Kosovo and Metohija, but then it was withdrawn. Now Moscow can only call for the maintenance of the status quo in the form of UN Security Council Resolution 1244, according to which Kosovo is the autonomy of Serbia within Yugoslavia. The only problem is that Yugoslavia has been gone for over 15 years.

Many observers note the external similarity of the multi-vector policy of Aleksandr Vucic with the policy of Marshal Tito, adjusted for the country's scale reduced three times in comparison with Yugoslavia. Indeed, both under Tito and under Vucic, Belgrade pursues a policy of neutrality, beneficially cooperating with both Moscow and the West – primarily Europe and partly the United States under the Trump administration. Now, due to objective circumstances, this list has been joined by the countries of the Persian Gulf and Beijing, which is actively investing in the construction of transit routes in the Balkans for the shortest access to European markets for its goods. It's like that. But I would draw another parallel.

Aleksandr Vucic in his policy is guided in many respects by Vladimir Putin. The same Byzantine style of government, the same vertical of power, which was not previously characteristic of Serbia. Only with the amendment that the place of the siloviki in this vertical is taken by a party – the Serbian Progressive Party, one of the largest political parties in Europe in terms of the number of political parties. A political system that has its own Surkov, Miller and Kadyrov. The same recently introduced social benefits for the birth of the first and second child (up to 4 thousand euros), preferential mortgages for young families. And the well-deserved position of the leader, if not of the entire Balkan Peninsula, then certainly of the former Yugoslavia from Bosnia to Macedonia – the very Serbian world that the supporters of the ideas of “Great Serbia” Vojislav Seselj spoke about earlier, from whose party the current president left.

Of course, he has long ceased to be a radical, but his universities were not in vain and today are helping to build the future of a small but important seven million country that recently gathered 120 countries of the world to celebrate the 60th anniversary of the Non-Aligned Movement. Yes, I almost forgot – Russia's last ally in Europe, who did not impose any sanctions against Moscow and opened a representative office of the Russian Ministry of Defense in its defense department. At least a sufficient explanation for the low gas price, isn't it?