Temple-mosque disputes have been flooding Indian courts in recent years. The current Gyanvapi mosque dispute stokes fear that violence could once again erupt between Hindus and Muslims over claims to the contested site.

An Aerial view shows Gyanvapi mosque, left, and Kashiviswanath temple on the banks of the river Ganges in Varanasi, India, Dec. 12, 2021.

The white domes and minarets of the Gyanvapi mosque rise above an intricate patchwork of alleys in Hinduism’s holiest city, Varanasi, in northern India.

The mosque was built after destroying a Hindu temple called Vishwanath, dedicated to Lord Shiva — on the same site — which was commissioned during the reign of the Mughal dynasty that ruled over much of India between the 16th and 18th centuries.

It has been a source of tension between Hindus and Muslims for hundreds of years. But in recent months, tensions have ratcheted up after a controversial decision by the country’s top court to allow a video survey of the mosque.

Judges ordered the video survey in May, in response to a petition by a group of Hindu women who believe it still houses idols of Hindu deities and were seeking permission to worship at the mosque.

Surveyors found a stone shaft in a pond inside the mosque where Muslims perform ablution before offering prayers. The Hindu side argues that it’s a symbol of their god, Lord Shiva.

The discovery has sparked a frenzy of legal petitions from Hindu groups including demands to ban Muslims from the mosque. 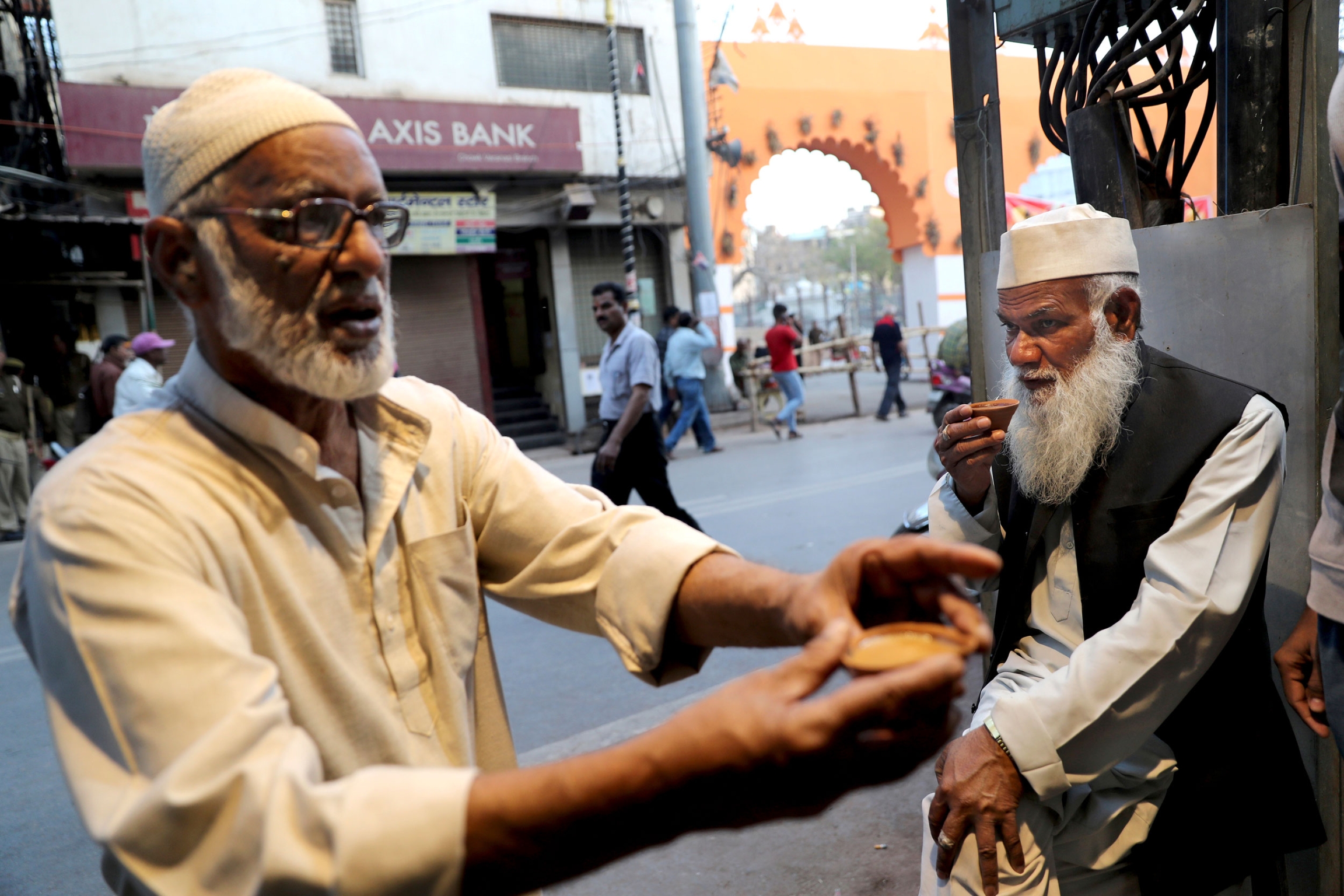 In this March 20, 2019, photo, Aijaz Mohammed Islahi, a caretaker of the 17th-century Gyanvapi mosque, right, sips tea outside the heavily guarded Vishwanath temple and mosque complex near the site of a proposed grand promenade connecting the sacred Ganges river with a centuries-old temple dedicated to Lord Shiva, in Varanasi, India.

'These are the abodes of God'

The court dispute has made Gyanvapi a religious flashpoint — much like the Babri mosque, which was torn down decades ago in Ayodhya, Uttar Pradesh. Many Hindus believe that the Babri mosque stood at the spot where the Hindu deity Lord Ram was born. In 1992, a Hindu mob armed with sticks and pickaxes demolished it, sparking deadly riots across the Indian subcontinent.

A lengthy court battle ensued over ownership of the land, and in 2019, India’s Supreme Court handed it to the Hindu side. Construction of a grand Hindu temple has already begun at the site. Its foundation was laid down by India’s Prime Minister Narendra Modi in 2020.

The outcome of the Babri mosque case has opened the door for more such disputes, said Saumya Saxena, who studies legal history and politics at the University of Cambridge. Petitions about temple-mosque disputes have been flooding Indian courts in recent years.

The Gyanvapi mosque is among a number of Mughal-era structures — including the Taj Mahal — that some Hindus say they want to take back.

“These are not mere buildings, these are the abode of God,” said Vimal Valappil, 37, who runs a website called Reclaim Temples, which has a section dedicated to “temples under Islamic occupation.”

To a lot of devout Hindus, Valappil said these sites represent their deities in captivity.

“They want these sites to be liberated. This is a historical injustice which needs to be rectified,” he said.

Like many Hindus, Valappil believes that when the Mughals arrived in India, they went on a rampage to destroy Hindu temples and to construct mosques in their place.

Historian Michael Dodson at Indiana University in Bloomington said it’s true that the Mughals destroyed temples but warns against oversimplification. Dodson said the dominant narrative that the Mughals were iconoclasts who were hostile to Hindus can be traced back to the British who ruled India after the Mughals.

“It’s part and parcel of British attempts to divide and rule. The British were never happier than when Hindus and Muslims were divided because it kept them from joining forces to overthrow the British themselves,” Dodson said.

The Mughals, he said, were actually predominantly tolerant and syncretic.

“They were Muslims, of course, but they had large numbers of Hindus in their military, in their nobility, in their government,” Dodson said.

There’s also no evidence that the destruction of the temple in Varanasi was motivated by animosity toward Hindus. Demolishing significant structures of political enemies was common at the time and was not limited to the Mughals, he added.

“The destruction of the temple is not an anti-Hindu act, but rather an act of demonstrating one’s political power,” Dodson said.

Hindus and Muslims have coexisted in Varanasi for hundreds of years, Dodson said, and the politicization of the dispute for national purposes is worrying.

“The potential for violence is great,” he said.

The Gyanvapi case has dominated news debates on Indian TV.

During one such show, a spokeswoman from Modi’s ruling party made comments about Prophet Muhammad that sparked outrage from several Islamic countries as well as protests by Muslim groups in India. A Hindu tailor in the city of Udaipur was murdered by two Muslim men for supporting the spokeswoman’s comments.

There are fears that the violence that erupted back in 1992 over the Babri mosque could erupt again.

“Hindus are not weak, we will snatch what is rightfully ours. We can do anything to bring justice to our god,” said Vishnu Gupta, the head of a Hindu nationalist group called the Hindu Sena.

He said if Muslims want peace, they should hand over all disputed sites to the Hindus.

Saxena, the researcher, said these disputes are “simply a microcosm of what’s going on generally, which is marginalization of religious minorities in almost all realms.”

In recent years, human rights groups say violence against Muslims, who are a minority in India, has gone up. Several new laws put Muslims at a disadvantage. Prominent Muslims have been arrested for speaking out. She said the temple-mosque disputes are enabled by the politics of Hindu nationalism, which sees India as a Hindu country rather than a secular state.

“Conversations of inflation, conversations on how the rupee is falling, conversations on unemployment — if one were to raise them, it would almost be termed anti-national because the national cause has become this idea of restoring a glorious Hindu past,” Saxena said.

While the Gyanvapi mosque sparks a national debate, some in Varanasi feel the dispute is being overblown.

Vishal Mehrotra, who runs a saree shop close to the mosque, remembers flying kites near it as a kid. He said Hindus and Muslims in Varanasi know better than to let old disputes create a rift between them.

“In Varanasi, Hindus and Muslims share an interdependent relationship,” Mehrotra said. “Neither can prosper without the other.”

As national tensions grow, he doesn’t think it has led to hard feelings between local Hindus and Muslims — and he hopes it never does.

Related: 'India is a tinderbox': Religious tensions come to a boiling point after brutal murder of Hindu tailor