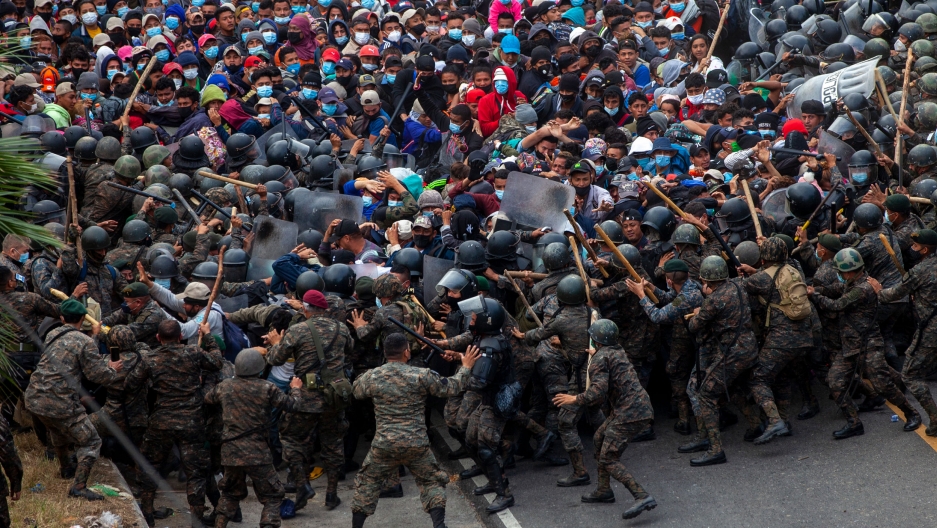 Thousands of migrants from Honduras were met with force on Sunday by Guatemalan police and soldiers who launched tear gas and wielded batons as they tried to push through a roadblock.

The roadblock was strategically placed at a chokepoint on the two-lane highway to Chiquimula in an area known as Vado Hondo. It’s flanked by a tall mountainside and a wall leaving the migrants with few options.

Some 100 migrants tried to make their way through authorities around 7:30 a.m. Sunday. The security forces beat them back and deployed tear gas. None made it through and the larger remaining contingent kept its distance during the melee.

Some migrants were visibly injured by baton strikes. One man, who did not give his name, leaned against a wall near police with a bandage atop his head.

“They hit me in the head,” he said. “I didn’t come with the intention of looking for problems with anybody. We’re brothers, Central Americans. We’re not looking for trouble. We just want to pass.”

Later, hundreds of migrants sat down on the roadway, refusing to leave and insisting they be allowed through, appealing to the soldiers as fellow Central Americans.

Leila Rodriguez, of Guatemala’s human rights office, spoke to the migrants, acknowledging “this is a distressing moment we’re experiencing.”

“We want to start a dialogue with you, to ask you to accept some of the needs of the Guatemalan people right now,” Rodriguez said, in apparent reference to President Alejandro Giammattei’s refusal to allow caravans through out of fear they could spread COVID-19.

Some of the migrants wore face masks, others didn’t, but there was little social distancing among them. Few had the negative COVID-19 tests that Guatemala requires for people entering the country.

Guatemala’s Health Ministry reported that 21 of the migrants sought medical attention at health centers and tested positive for the coronavirus. The department said the 12 men and and nine women would not be returned to Honduras until they undergo quarantine at centers in Guatemala.

As the standoff stretched toward 24 hours, some migrants, like Ismael Eliazar of Choloma, Honduras, lay down in the grass beside the roadway. “We have only had water, even my stomach is grumbling,” Eliazar said.

Referring to the damage wrought by two major hurricanes that hit his hometown near San Pedro Sula in November, Eliazar said “there is still mud everywhere there, everything got knocked down, we lost everything.”

Guatemalan soldiers and police had blocked part of a caravan of as many as 9,000 Honduran migrants Saturday night at a point not far from where they entered the country, seeking to reach the US border. 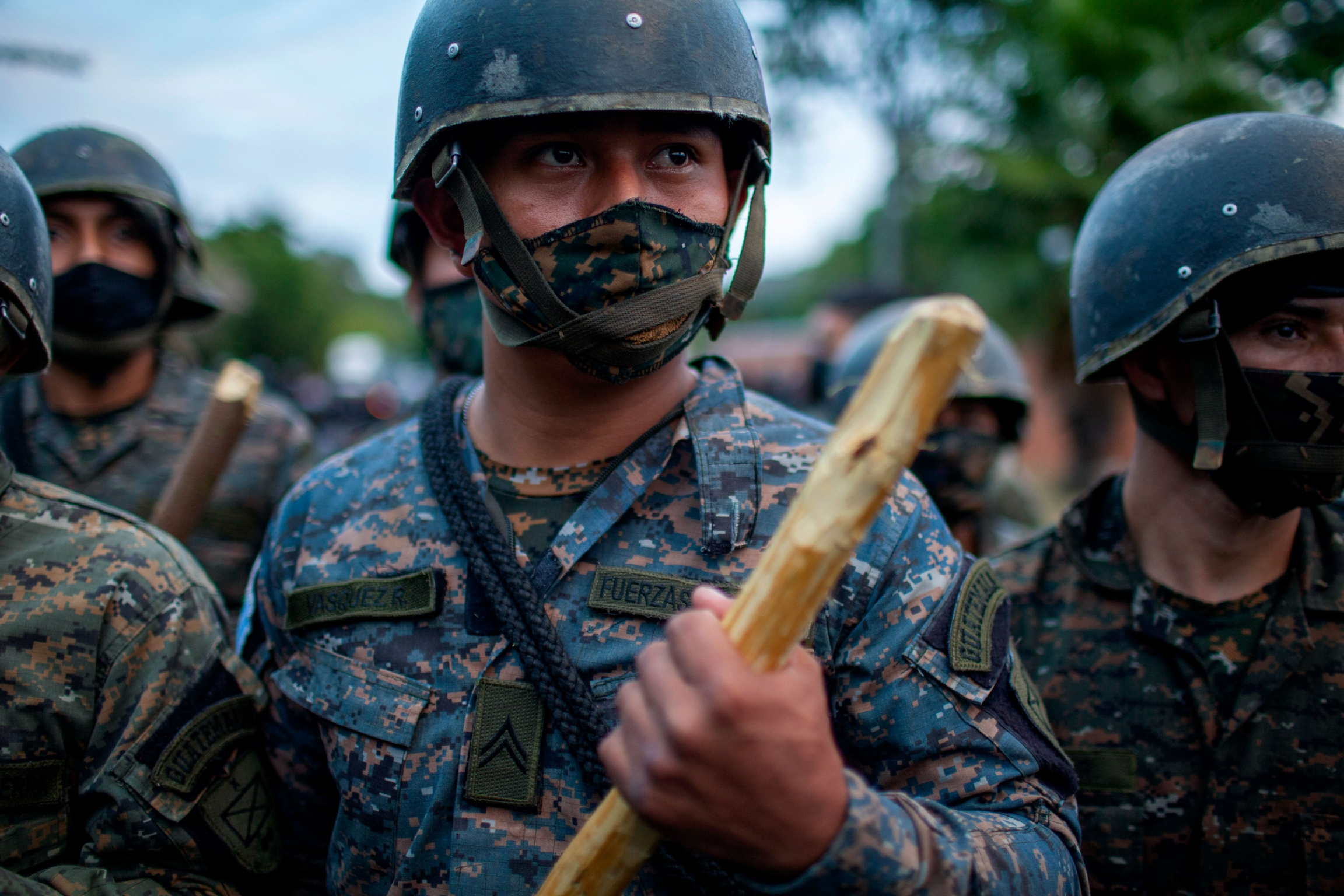 Guatemalan soldiers block part the passage of Honduran migrants in their bid to reach the US border, in Vado Hondo, Guatemala, Jan. 17, 2021.

The soldiers and riot police — about 450 in total — formed ranks across a highway.

Guatemala’s immigration agency distributed a video showing a couple of hundred men scuffling with soldiers, pushing and running through their lines, even as troops held hundreds more back Saturday night.

On Saturday, Giammattei issued a statement calling on Honduran authorities “to contain the mass exit of its inhabitants.” On Friday, the migrants entered Guatemala by pushing past about 2,000 police and soldiers posted at the border; most entered without showing the negative coronavirus test that Guatemala requires.

“The government of Guatemala regrets this violation of national sovereignty and calls on the governments of Central America to take measures to avoid putting their inhabitants at risk amid the health emergency due to the pandemic,” Giammattei’s statement continued.

Guatemala has set up almost a dozen control points on highways, and may start busing more migrants back to Honduras, as it has done before, arguing they pose a risk to themselves and others by traveling during the coronavirus pandemic.

Governments throughout the region have made it clear they will not let the caravan through.

Mexico mounted a dissuasive campaign at its southern border, circulating videos and photos of thousands of National Guardsmen and immigration agents preparing if the migrants manage to cross Guatemala.

“The Mexican government recognizes the outstanding work of the government of Guatemala, which has acted in a firm and responsible manner toward the contingent of migrants that violated its sovereignty,” according to the statement.

The department said Mexico “rejects any unregulated and disorderly entry that puts at risk the lives and health of the migrant population or the host country.”

Honduras has been ravaged by the COVID-19 pandemic and the hurricanes that hit the country in November leaving its most productive northern regions in tatters. Many of the migrants hope for a warmer reception from the incoming administration of President-elect Joe Biden who will be inaugurated Wednesday.

So far, Biden’s team has indicated it will not make immediate changes to policies at the US-Mexico border.