Vybz Kartel gets called out as thirsty by some Gaza fans for sharing explicit videos of females.

When did sharing photos or videos of skimpily clad ladies become a bad thing? That seems to be the question from at least one Gaza fan in support of Adijah Palmer, Vybz Kartel government name, as a couple of fans slam the dancehall veteran in the comment section of a recent upload to his Instagram page. While Kartel has uploaded more risqué clips, it’s a gif of a voluptuously shaped woman strutting her stuff in a poorly lit room, wearing only her underwear that broke the camels back.

The caption left by Kartel reads, “This a fi public eye…mi cyaw show the private @tha_kay_way,” which implies that the model shared something a bit more tantalizing, however, he’s only showing us the bare minimum, which is still racy.

The disgruntled fans who appear to be a duo of females bashed the Teacha for what they see as very poor marketing tricks, along the 44-year-old’s embracing of a dying lifestyle as a player.

“No disrespect. Vybz being a player is out dated. U can show di world u got bagga gal but it dnt look good 4 u. Players was hyped years ago NOT ANYMORE. We dont need u 2 show us u av gal pon u fone. No disrespect at all some1 need to say wat most r thinking n satin,” penned one fan. 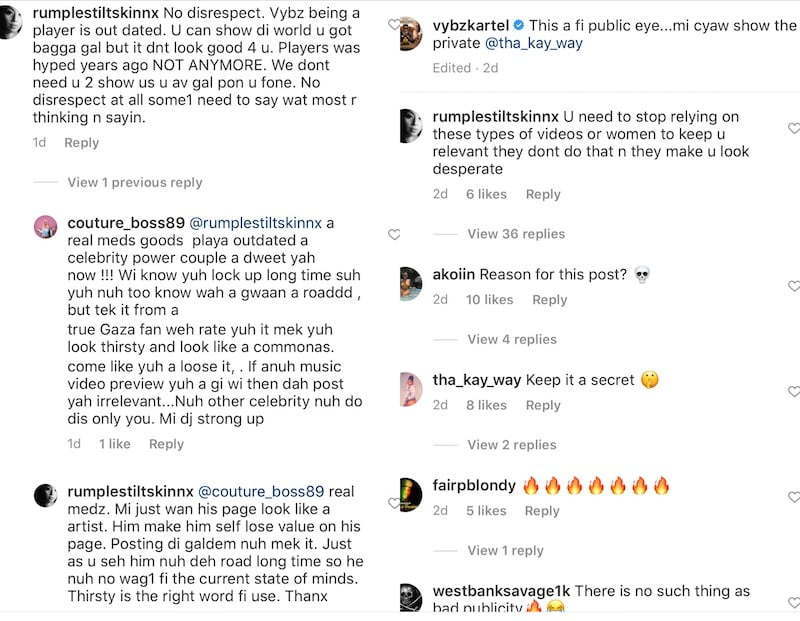 The harsh criticism picked up support when another fan chimed in. “A real meds goods playa outdated a celebrity power couple a dweet yah now,” she mentioned before addressing Kartel’s situation directly, “Wi know yuh lock up long time suh yuh nuh too know wah a gwaan a roaddd , but tek it from a true Gaza fan weh rate yuh it mek yuh look thirsty and look like a commonas.”

The concerned fan also questioned Palmer’s current state of mind, along with his knowledge of what she sees as a shift in trend. “come like yuh a loose it, . If anuh music video preview yuh a gi wi then dah post yah irrelevant… Nuh other celebrity nuh do dis only you. Mi dj strong up,” she recommended.

Vybz Kartel has been known for setting trends and going against the grain when it comes to all aspects of his life and career. It also should be noted that Vybz dropped a female themed track titled “With You” only hours before dropping the controversial gif. Therefore, this could have been a part of his marketing plan.

The fan who started the thread chimed in once more, expressing that her hard comments are coming from a place of respect and love for her beloved Worl’Boss. “Mi just wan his page look like a artist,” she mentioned, “Him make him self lose value on his page. Posting di galdem nuh mek it. Just as u seh him nuh deh road long time so he nuh no wag1 fi the current state of minds. Thirsty is the right word fi use. Thanx.”

However, what was seen as trash by a selected few, was actually being labeled as straight fire and the work of a “marketing genius” by other Gaza supported.

One fan was clearly in appreciation of this and similar photos that were shared in the past. “NOTICE GAZA GIRLS THEM LOOK BAD NUH F**K,” he wrote, while others left fire emoticons and even compared the female’s thickness in the click to molasses.

Vybz Kartel represents for his female fans on a regular basis, and showing them off to his over 1 million Instagram followers could just be his way of showing his appreciation for their love. In reference to trends, Vybz Kartel seems ready to drop what could be his hottest album yet, and he specifically curated a section for his DIVAS.