​​​​​​​The French Alps region is getting hit hard by drought, most likely exacerbated by climate change. And that's putting the entire economy there in serious jeopardy, because where there's no water, there are no tourists.

A boy walks toward a dock across rocky terrain exposed as the Durance River in France recedes. Water levels have fallen 50 feet as the hot, dry weather continues.

On a scorching, cloudless morning, two small kids race down a public dock on the Durance River, in the Hautes Alpes, in France.

But there’s no water for them to jump into. The normally floating dock is resting on sand. The Durance has run nearly dry. What’s left is a narrow stream that’s receded about a quarter-mile away.

“Normally, the river’s full, and you see sailing, skiing, paragliding, and what’s it called, kite surfing?” said Marie, the kids’ grandmother, who asked not to use her last name.

Today, the only boat in sight is a marooned catamaran. 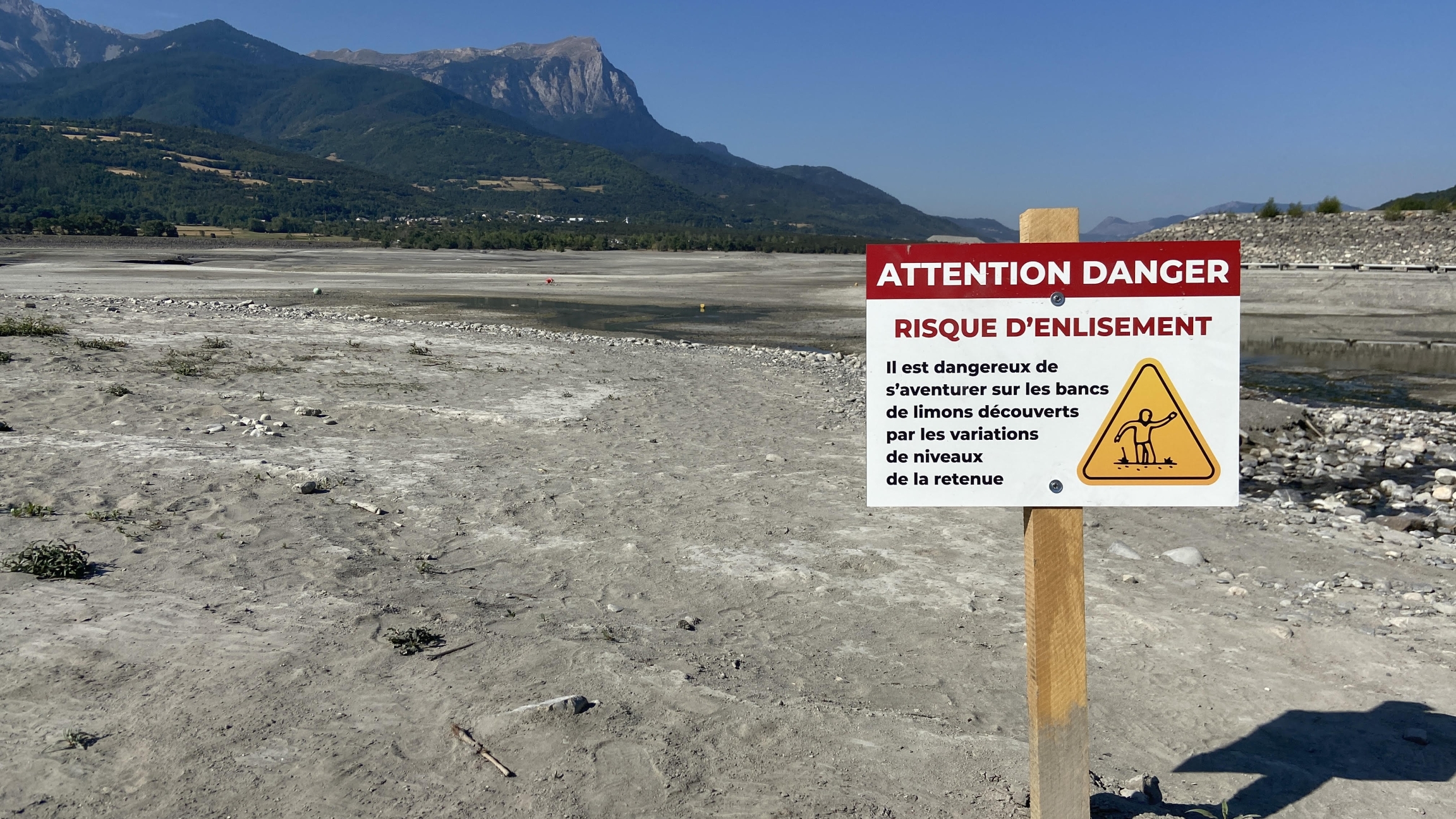 A quicksand warning where water once ran. France’s Durance River, which cuts through the Hautes Alpes on its way south, has receded dramatically exposing tourists to new, dangerous terrain.

“It’s so sad,” Marie said. “This part of the river is actually dammed to create a reservoir. It provides water to the south of France as well.”

This year’s unusually hot, dry summer in Europe has brought drought to some record highs. That’s terrible news for many in the French Alps. Because water is what lures the tourists — for rafting and river sports in summer and, of course, skiing in winter.

Marie, like so many people here, hopes this year is an anomaly. But she and others suspect these arid conditions are part of a trend exacerbated by global warming. What local business owners know for sure is that it’s already hitting them hard.

A bit downstream, Thierry Lefevre owns a windsurfing school that used to be on the shoreline. That’s now 300 yards away. On a typical morning, he said, he has between 60 and 80 students ready to get wet.

“Today, we had just one,” he said. “We’re seeing less clientele but the worst is that we might have to shut down mid-August, depending on the water level. Normally, we’re open in September.”

There are dozens of businesses along the Durance like LeFevre’s. At another, a tourist named Oralie Gamonie paid $20 for a spin on the lake, on a bouncy inner tube. She said that’s not what she drove three hours to do. 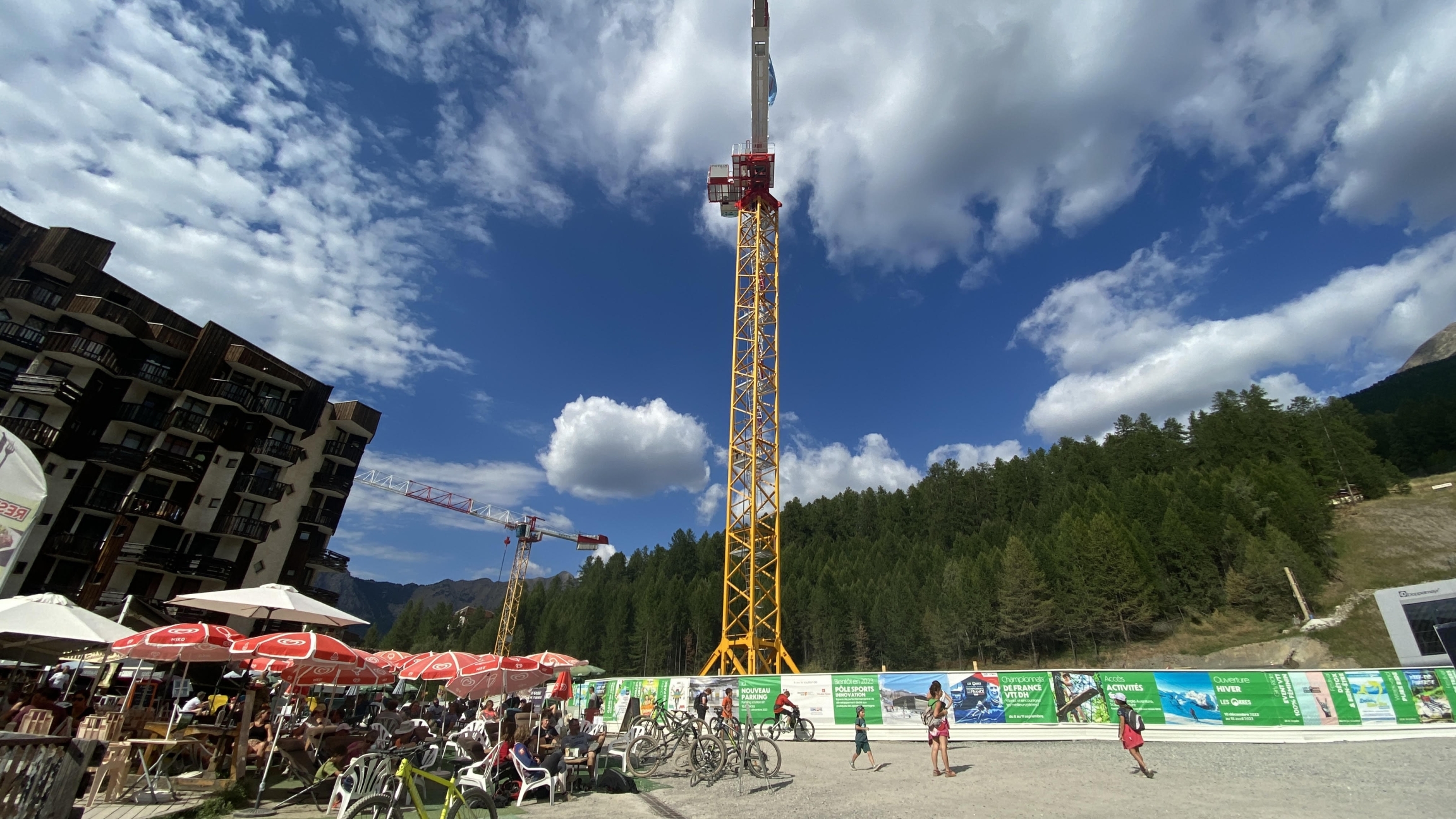 Construction is underway at the Les Orres ski station in the Hautes Alpes. They’re building an indoor virtual sports center to hedge their bets against future snowless winters.

“I’m disappointed the lake’s so low,” she said. “I’d signed up for a flight in a propeller-driven hydrofoil. But they canceled it because the spot it takes off from is now just mud.”

This is where the drought’s damage is most visible. All around the edge of the reservoir, you can see a 50-foot-high, whiteish, rocky ring that’s normally underwater. But this problem begins high in the mountains. This past winter, little snow fell. And it’s barely rained since May.

“These days, there are pros and beginners who want to practice their various sports all year round,” he said. “By this time next year, you’ll be able to ski here in the middle of summer, indoors.”

It’s all possible, he said, due to augmented reality glasses and ski-treadmills that can change inclination and speeds.

But it’s not just virtual skiing, said the mayor of the village of Les Orres, Pierre Vollaire.

You can bike, kayak, rock climb — snow or no snow outside the windows. The village has less than 600 residents. And 275,000 annual visitors. Losing them, he said, is out of the question. 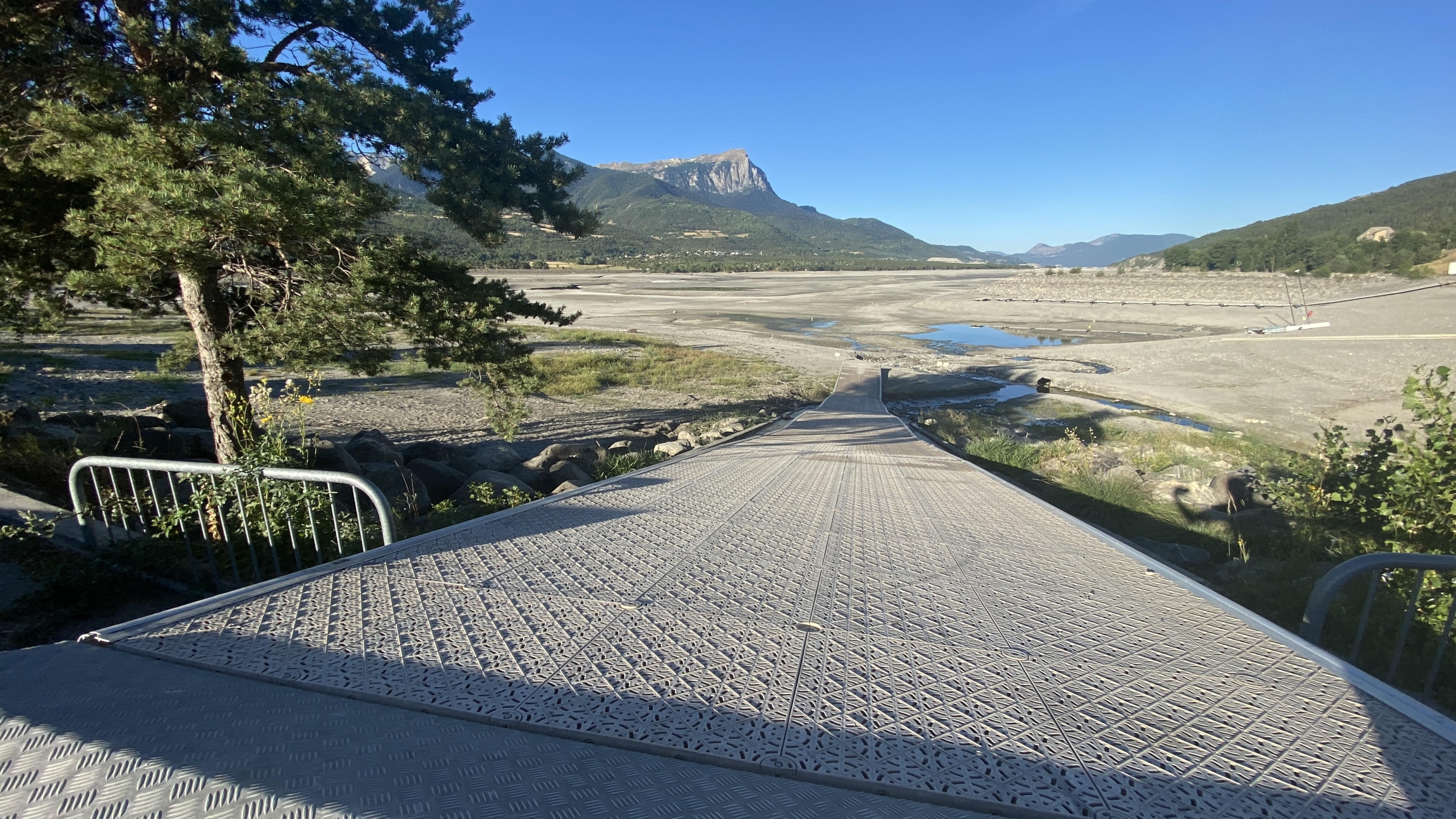 A dock to nowhere: Floating docks like this one are normally used for swimming and boating. This one’s now some 300 yards from the receding waters of the Durance.

“With the heat waves and the drought, it’s been a tough year,” Vollaire said. “It’s clear the planet’s getting warmer and warmer and we’re keeping that well in mind. All of our projects are related to that.”

Vollaire said that about 12,000 people work in skiing throughout this region of the Alps.

The indoor virtual sports center alone will add another 800 jobs. The investment is huge, but Les Orres has gotten subsidies from the government. That makes the risks easier to take on.

Back on the Durance River, windsurf school owner Lefevre said that small business owners like him don’t have that luxury.

“What can I do? When the season’s done we’ll clean up and then sell off our gear until we can balance the books. After that, I just don’t know.”