Over 1.6 million tickets were sold during its first week in Colombian movie theaters — a record for animated films in the country. The government plans to use the film to change the narrative about Colombia abroad.

An "Encanto" billboard stands at a movie theater in Bogotá, Colombia. Distributors say that 5% of Colombia's population has already watched the film.

At a movie theater in Bogotá, Colombia, couples giggled as the Disney movie “Encanto” finished and the credits appeared on screen. Some even had tears in their eyes.

Most of the people at the weeknight showing were adults who were on dates, or just hanging out with friends.

They came to the movie for its entertaining plot and lively music, but also because they wanted to see how Disney depicts Colombia.

“I loved how they show the racial diversity of Colombian people."

Juliana Idarraga, a commodities trader who watched the film "Encanto" 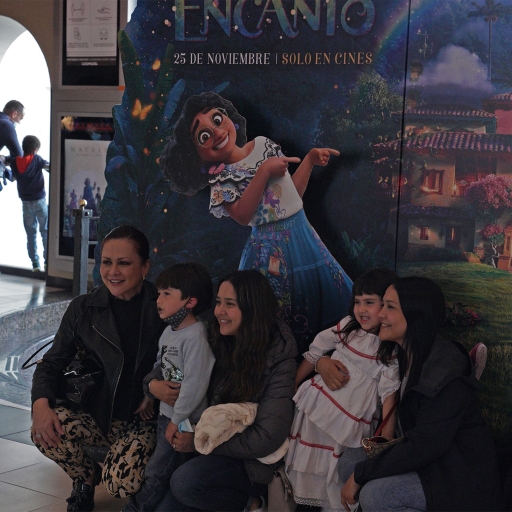 Spectators take a photo in front of an "Encanto" billboard at a cinema Bogotá, Colombia. The movie has sold record numbers of tickets in Colombia.

“I loved how they show the racial diversity of Colombian people,” said Juliana Idarraga, a commodities trader who went to watch the film.

“Normally, what they show about Colombia are negative things, like the drug trade,” added Xiara DeLuque, another spectator. “Here it's the opposite, I mean they have cheese arepas and the dancing donkeys. It was great.”

“Encanto” is set in the lush mountains of central Colombia, and features Mirabel, a 15-year-old who is having a tough time fitting in with her family.

Everyone in Mirabel’s family has a magic power, including a cousin who is able to speak with animals and an older sister who has unlimited strength and can carry donkeys on her shoulders.

But Mirabel has no such gift that is evident. She must find her purpose — while navigating her family’s expectations.

It may sound like a typical Disney plot. But the movie has made a huge splash in Colombia, where it’s also become a favorite among adults.

Related: Colombian Deportado Coffee's founder hopes to open a conversation about US immigration

More than 1.6 million tickets were sold for “Encanto” during its first week in Colombian movie theaters — a record for animated films in the country — and distributors said that by the end of last week, 5% of Colombia’s population had already seen the film.

Some movie theaters in Bogotá show "Encanto" every half hour and the Colombian government is using the film abroad in campaigns to promote the country and its products.

Lisandro Duque, a filmmaker in Bogotá, said that the movie has been embraced so warmly because it provides Colombian audiences with a reason to “feel good” about their country, and have some kind of “redemption.” 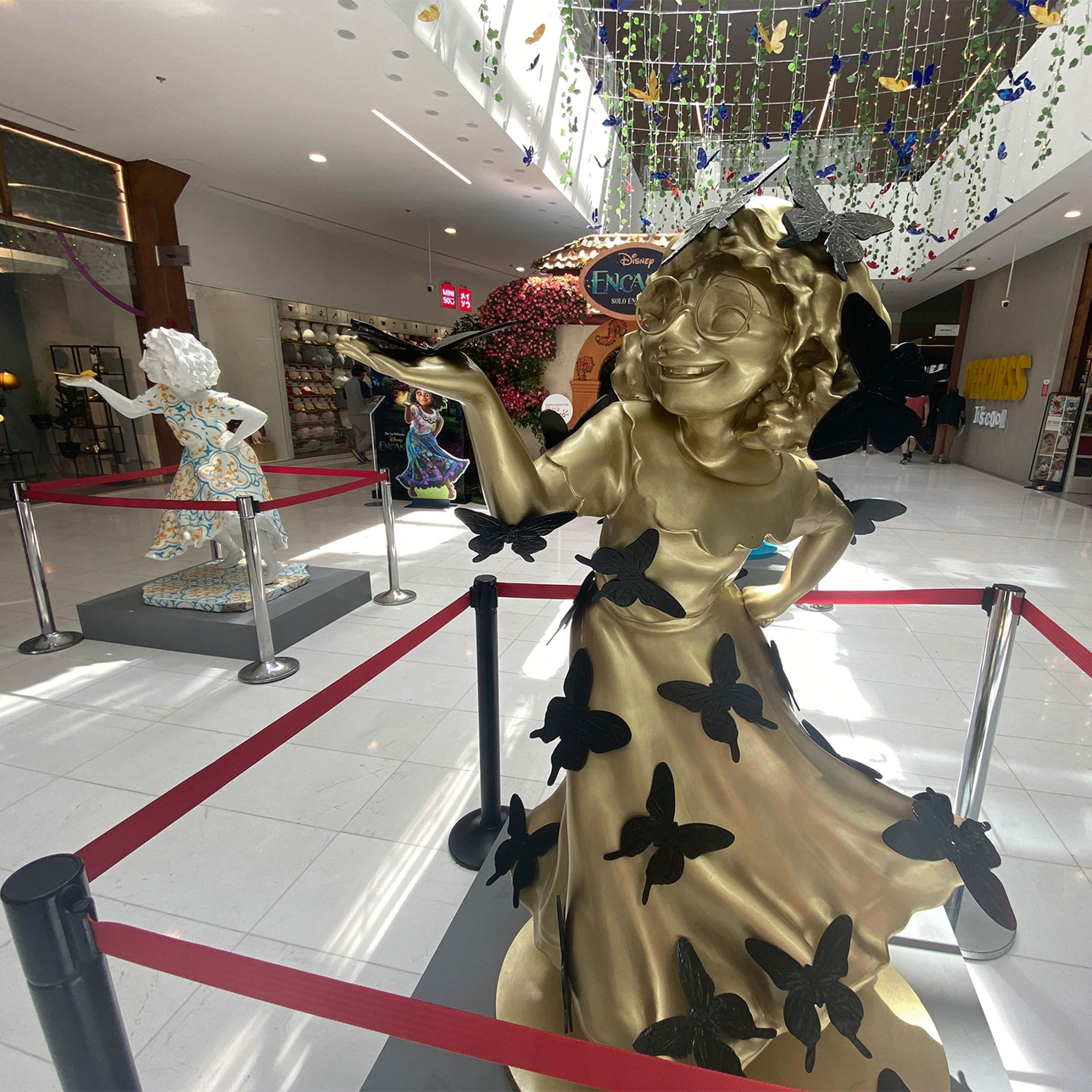 Plaster statues of Mirabel, the main character in “Encanto," stand at the entrance to a shopping mall in Bogotá, Colombia.

In Hollywood films and streaming services like Netflix, Colombia is often depicted as a backward, violent place rife with drug trafficking.

Like in “Narcos,” where Colombia’s history is told through the eyes of an US cop who arrives in the country to fight corrupt police and take down the world’s biggest drug dealer.

“Those narco films were bothering Colombians a lot. They didn’t want them to become a popular genre, like Westerns.”

“Those narco films were bothering Colombians a lot,” Duque said. “They didn’t want them to become a popular genre, like Westerns.”

“Encanto,” on the other hand, shows Colombia as a country teeming with biodiversity and festive music, where different ethnic groups live together in harmony.

Related: Reclaiming Colombia’s Black history, one tour at a time

Duque added that in “Encanto,” Colombia is portrayed in a folksy and antiquated fashion, pointing out that the characters walk around in ponchos, and wear clothes from the 1920s. So, the movie doesn't exactly portray modern-day Colombia, where, even in rural towns, there are more motorcycles than donkeys.

A boost for tourism

Colombia’s government is using “Encanto” to promote tourism and investment.

Colombia's embassies around the world have organized special screenings of the film for tour operators and journalists.

In South Korea, the Colombian Embassy even sent a truckload of flowers to the movie’s opening night. (Flowers are one of Colombia’s main exports.) 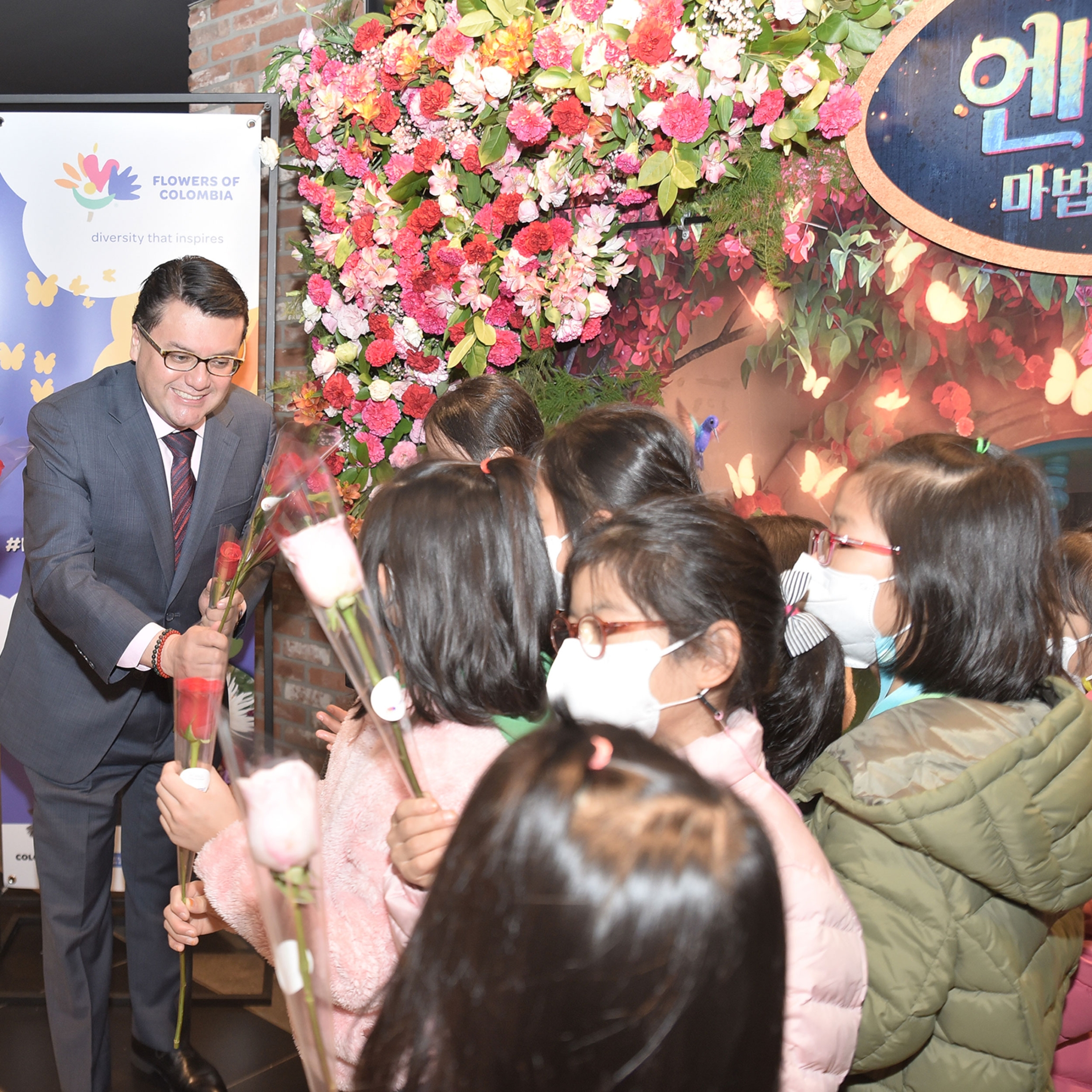 Colombia's ambassador to South Korea hands out flowers to children during the premiere of "Encanto" in Seoul. The Colombian government has been using the film to promote the country.

Courtesy of the Embassy of Colombia in South Korea

“We want people to have first-hand knowledge of everything our country has to offer,” said Gilberto Salcedo, vice president for tourism at ProColombia, the government agency in charge of promoting tourism and investment.

“Disney has a huge reach. So, the fact that it featured Colombia in its latest film will inevitably increase interest in our country.”

“Disney has a huge reach. So, the fact that it featured Colombia in its latest film will inevitably increase interest in our country.”

Even local governments have embraced the opportunity.

The province of Quindio, home to the tall palm trees that appear in the movie, put up billboards of the film near its tourist attractions. And it also hired an Instagram influencer to make a video showing how the province’s landscapes compare to those in the film. 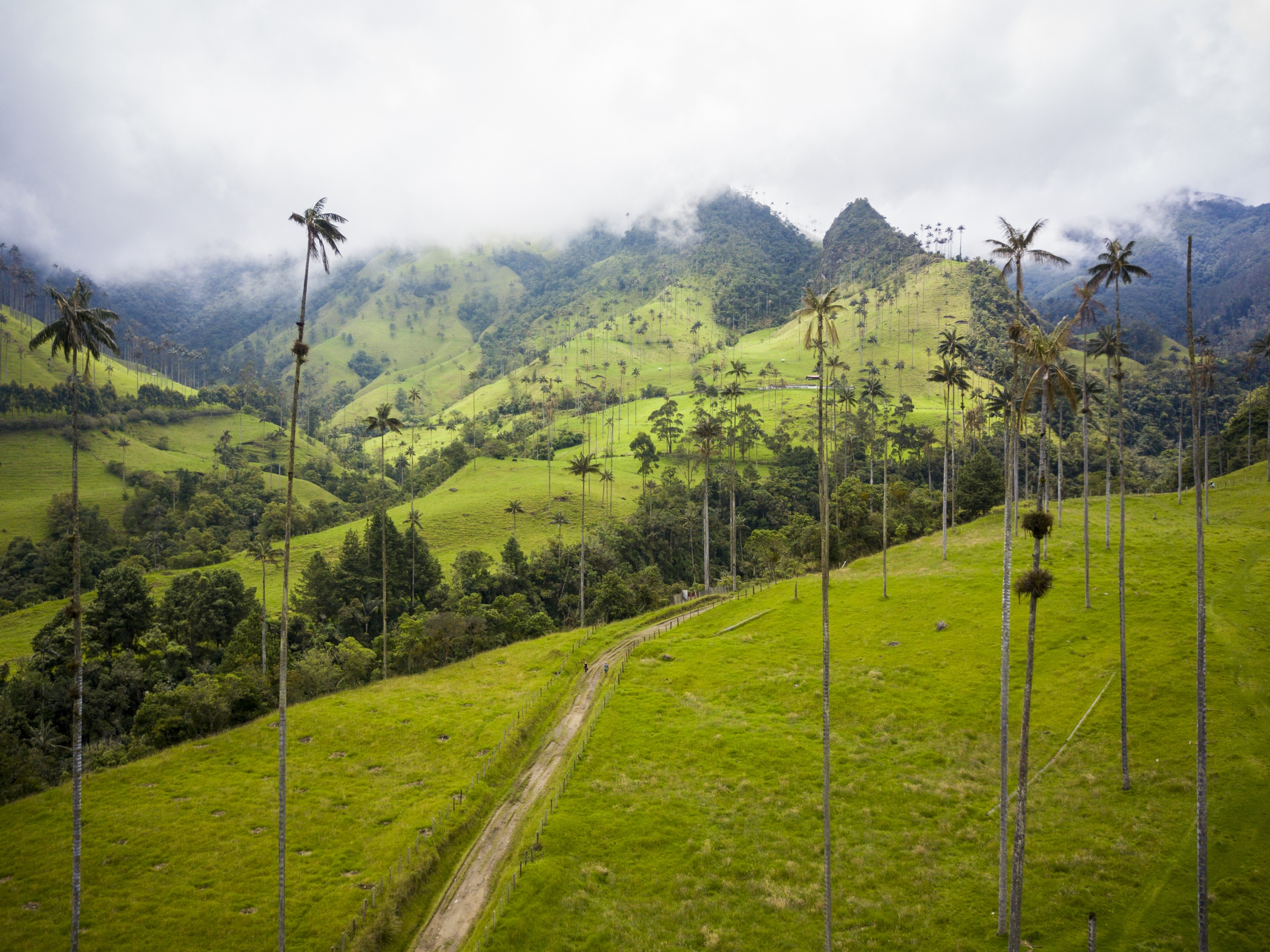 The Cocora valley in the Colombian province of Quindio inspired the landscapes in "Encanto."

“We couldn’t miss out on this opportunity,” said Laura Gonzalez, from the Quindio Convention Bureau, a tourism promotion group. She pointed out that in Mexico and Brazil, films like “Coco” and “Rio,” which were set in those countries, helped boost tourism there.

For Colombia, it’s been a rough year marked by violent street protests and growing rates of poverty because of the pandemic.

A movie like “Encanto,” that shows Colombia as a magical place full of possibilities has been a welcome change for local audiences, while helping the country improve its image.