The government says it is trying to crack down on human trafficking, but Corina Drousiotou, from the Cyprus Refugee Council, said it's having the opposite effect.

A migrant looks through a fence as others wait in a line to be registered inside a refugee camp in Kokkinotrimithia, outside Nicosia, Cyprus, Nov. 9, 2021.

The eastern Mediterranean island of Cyprus was largely unvisited during Europe’s refugee crisis six years ago.

Due to increasingly closed borders across the continent, Cyprus is now seeing more refugee arrivals by sea and land, with more than 20,000 people last year and nearly 2,000 in October alone.

But Cyprus has taken a hardline stance against immigration, leaving  thousands of asylum-seekers in limbo.

Related: Canada promised to resettle 40,000 Afghans. Many are still waiting for answers.

When Syrian Kawthar Raslan saw the lights of Cyprus twinkling in the distance, she thought that she would finally be safe — until she saw the Cypriot Coast Guard.

“It was early evening when they approached us, and we were afraid.” Raslan, 25, recalled. “We had run out of water after a day and a half traveling. My daughter was in my lap and she could barely speak.”

Battling waves on the Mediterranean Sea with her husband, two young children and dozens more Syrian refugees, they set sail from the coast of Lebanon in late August. But there was one more passenger — Kawthar was nine-months pregnant.

The Coast Guard eventually agreed to take her on board.

Related: The spotlight has faded on Afghanistan, but not the urgency for Afghans seeking safety

“I got into the boat, and my husband followed me with the kids, but then the police didn’t allow him. I was trying to say ‘children,’ ‘my babies,’ but the police said everything would be OK, so I left my family there and they took me to the shore.” 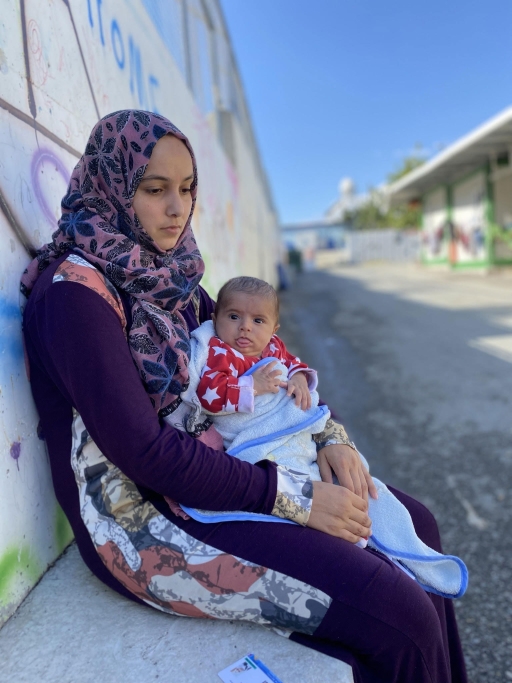 “I got into the boat, and my husband followed me with the kids, but then the police didn’t allow him. I was trying to say ‘children,’ ‘my babies,’ but the police said everything would be OK, so I left my family there and they took me to the shore.”

After being taken to the hospital, Raslan gave birth the next night. But her joy was cut short.

Speaking to a nurse using Google translate, she frantically asked about her family. The nurse handed her back the phone. The message read: “They have been deported back to Lebanon.”

Raslan and her husband fled aerial bombardment in their villages near the Syrian city of Idlib and crossed into Lebanon in 2017. They struggled for years to make ends meet in a country experiencing one of the world’s worst economic crises, where a third of the population are impoverished Syrian refugees.

She now cradles her 2-month-old baby, Yazan, at a refugee camp in the south of Cyprus.

Last year, faced with an increase in boats arriving from its Middle Eastern neighbors, Cyprus signed an agreement with Lebanon to automatically return asylum-seekers.

The government says it is trying to crack down on human trafficking but Corina Drousiotou, from the Cyprus Refugee Council, said it is having the opposite effect.

“We consider all these returns are push backs and violations of international law."

“We consider all these returns are push backs and violations of international law,” she told The World.

She added that almost all Syrians in Cyprus are given a lesser form of refugee status called subsidiary protection, which does not allow them to legally bring family members across.

“That just opened more smuggling routes, and people are forced to bring their families in very risky ways instead.”

After ethnic conflict ended in 1974, the island has been physically divided between the majority Greek-speaking Republic of Cyprus, an EU member that governs the southern two-thirds of the island, and a breakaway majority Turkish-speaking territory in the north, whose government is only recognized by Turkey.

The split is marked by a 110-mile-long, United Nations-monitored buffer zone dotted with checkpoints. It runs right through Nicosia, making it the world’s last divided capital city.

Enjei Grace and Daniel Ejube, who both fled Cameroon’s ongoing civil war, had no idea about the distant island’s fractious politics.

“We didn’t have much of a choice, we just needed to make a move.” she said.

Grace, 24, and Ejube, 20, are from Cameroon’s discriminated English-speaking minority, in areas where the government is fighting an insurgency. Grace said it’s difficult to keep in touch with family.

“The army is shooting indiscriminately. People fled for their lives into the bushes where there is no phone network.”

“That’s when we realized Cyprus was divided. We had no idea. … But it sounds a bit like home — the two sides don’t want to work together.” 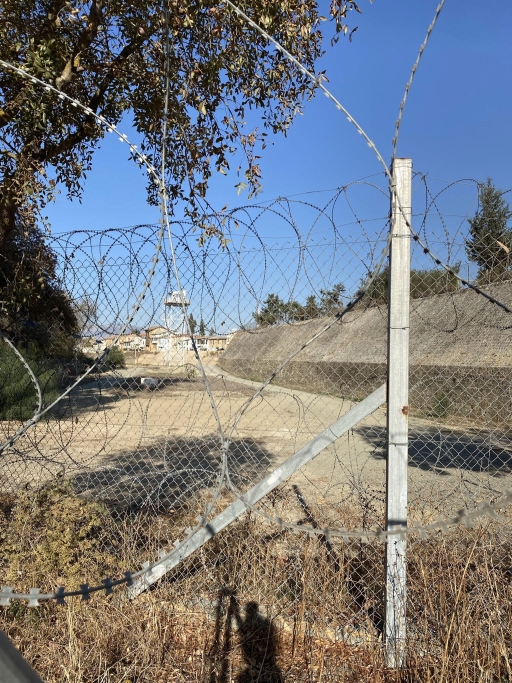 This is the buffer zone that divides north and south Cyprus where asylum-seekers have tried to cross and are now stranded.

“That’s when we realized Cyprus was divided. We had no idea.” Grace admitted. “But it sounds a bit like home — the two sides don’t want to work together.”

They attempted to cross into the south, over the 16th-century Venetian walls that wrap around the city, but were caught by UN peacekeepers.

For almost half a year, they have been stranded in the buffer zone, in the shadow of abandoned buildings still pockmarked by shell damage, living in two blue tents behind a café.

“It’s really boring. Thankfully the café gave us the wifi password, so we are mostly on the internet and sleeping the whole day. We don’t want to run anymore,” Grace sighed. “We just hope they will decide our case soon.”

The suspicion among migration experts is that the government is unwilling to allow the Cameroonians to cross, so as not to set a precedent.

Nikos Trimikliniotis, a sociology professor at the University of Nicosia, said that the Cypriot government is endangering the whole concept of asylum.

“If we are serious about being a country based on the rule of law, they should accept all applications. If you don’t want a precedent, then you don’t allow asylum at all. Is this what we want?”

The Cypriot government didn’t respond to The World’s request for comment.

However, Interior Minister Nicos Nouris has previously said that it hosts the EU’s largest number of asylum-seekers per capita — the island has a population of just 1 million — and that the rest of Europe must offer more resettlement places and further funding.

This excuse is of little use to Raslan, alone and separated from her family, or Grace and Ejube, all three fleeing unsolved wars — trapped in the purgatory of another.