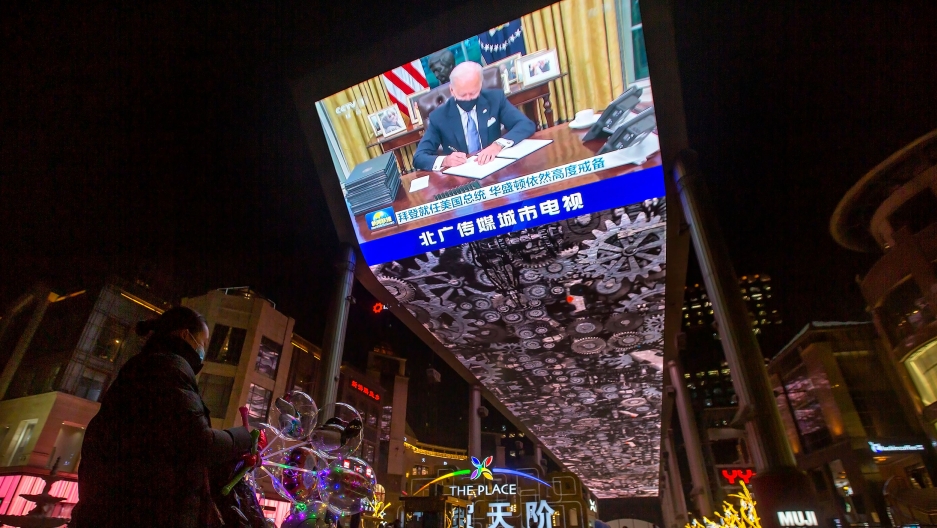 A vendor selling lighted balloons stands near a large video showing a news report about the inauguration of US President Joe Biden at a shopping mall in Beijing, Jan. 21, 2021.

After a sometimes confrontational and often turbulent relationship with the the Trump administration, China on Thursday expressed hope the newly inaugurated Biden administration will improve prospects for people of both countries and give a boost to relations.

“I think after this very difficult and extraordinary time, both the Chinese and American people deserve a better future,” Foreign Ministry spokesperson Hua Chunying told reporters at a daily briefing.

She said China and the US need to relaunch cooperation in a number of areas. She particularly welcomed the new administration’s decision to remain in the World Health Organization and return to the Paris Agreement on climate change.

“Many people of insight in the international community are looking forward to the early return of Sino-US relations to the correct track in making due contributions to jointly address the major and urgent challenges facing the world today,” Hua said.

She also criticized ex-Secretary of State Mike Pompeo and other former officials, a day after Beijing imposed travel and business sanctions on 28 of them, including Trump’s national security adviser Robert O’Brien and UN Ambassador Kelly Craft.

Hua on Wednesday described Pompeo as a “doomsday clown” and said his designation of China as a perpetrator of genocide and crimes against humanity was merely “a piece of wastepaper.”

Hua’s markedly more friendly tone Thursday appeared to signal Chinese hopes to cool the rhetoric on both sides and give the relationship a chance to heal over some of the worst divisions.

Also Thursday, China’s Ambassador to the US Cui Tiankai offered his congratulations to Biden on Twitter, which is widely used by the Chinese government despite being blocked in the country.

Chinese President and Communist Party leader Xi Jinping congratulated Biden on his election but had no immediate comment on Wednesday’s inauguration.

While Biden’s administration is expected to seek to put relations with China back on an even keel, he is unlikely to significantly alter US policies on trade, Taiwan, human rights and the South China Sea that have angered Xi’s increasingly assertive government.