class=”MuiTypography-root-133 MuiTypography-h1-138″>'Born into Blackness': A new book centers Africa in the expansive history of slavery

Major aspects of the trans-Atlantic slave trade from an African perspective have gotten erased throughout time. Howard French set out to illuminate a more expansive understanding in a new book called, "Born in Blackness: Africa, Africans, and the Making of the Modern World, 1471 to the Second World War."

Historical accounts of slavery often fail to place Africa at the center of it.

Instead, relatively reductive, Western-centric narratives get passed down: Enslaved Africans were ripped from their roots, sold and shipped to the Western Hemisphere. Globalized markets exploded. Western empires triumphed.

Related: Liberia was founded by people enslaved in the US. Advocates say the US should not end an immigration program that helps them.

Major aspects of the trans-Atlantic slave trade from an African perspective have gotten erased throughout time.

Howard French set out to illuminate a more expansive understanding of slavery in a new book called, "Born in Blackness: Africa, Africans, and the Making of the Modern World, 1471 to the Second World War."

"In some ways, hurricanes serve as an apt metaphor for trans-Atlantic slavery, just as those systems form on the western fringes of Africa before hurling their energy upon the distant shores of the Americas, the mass traffic in Africans violently yoked together the millions of victims gathered on its western shores before scattering them in the distant hemisphere to the West in sometimes random-seeming ways."

"In some ways," French writes in the book, "hurricanes serve as an apt metaphor for trans-Atlantic slavery, just as those systems form on the western fringes of Africa before hurling their energy upon the distant shores of the Americas, the mass traffic in Africans violently yoked together the millions of victims gathered on its western shores before scattering them in the distant hemisphere to the West in sometimes random-seeming ways."

French, a former New York Times correspondent, joined The World's host Marco Werman to discuss his book, with a focus on the island nation of São Tomé in the Atlantic Ocean off the coast of West Africa.

Related: 'Willful amnesia': How Africans forgot — and remembered — their role in the slave trade

French explained that São Tomé is where the plantation model began. It's where African slaves were first "exclusively used by Europeans" for the large-scale production of sugar, he said.

In the first few decades of the 16th-century, that model got transported across oceans, from Brazil to the Antilles in the Carribean to the United States. The shift from sugar production to cotton production all used this same economic model that "was essentially perfected in São Tomé," French explained.

Related: Big chocolate companies use child labor. Can a 1789 US law hold them accountable for violations abroad? 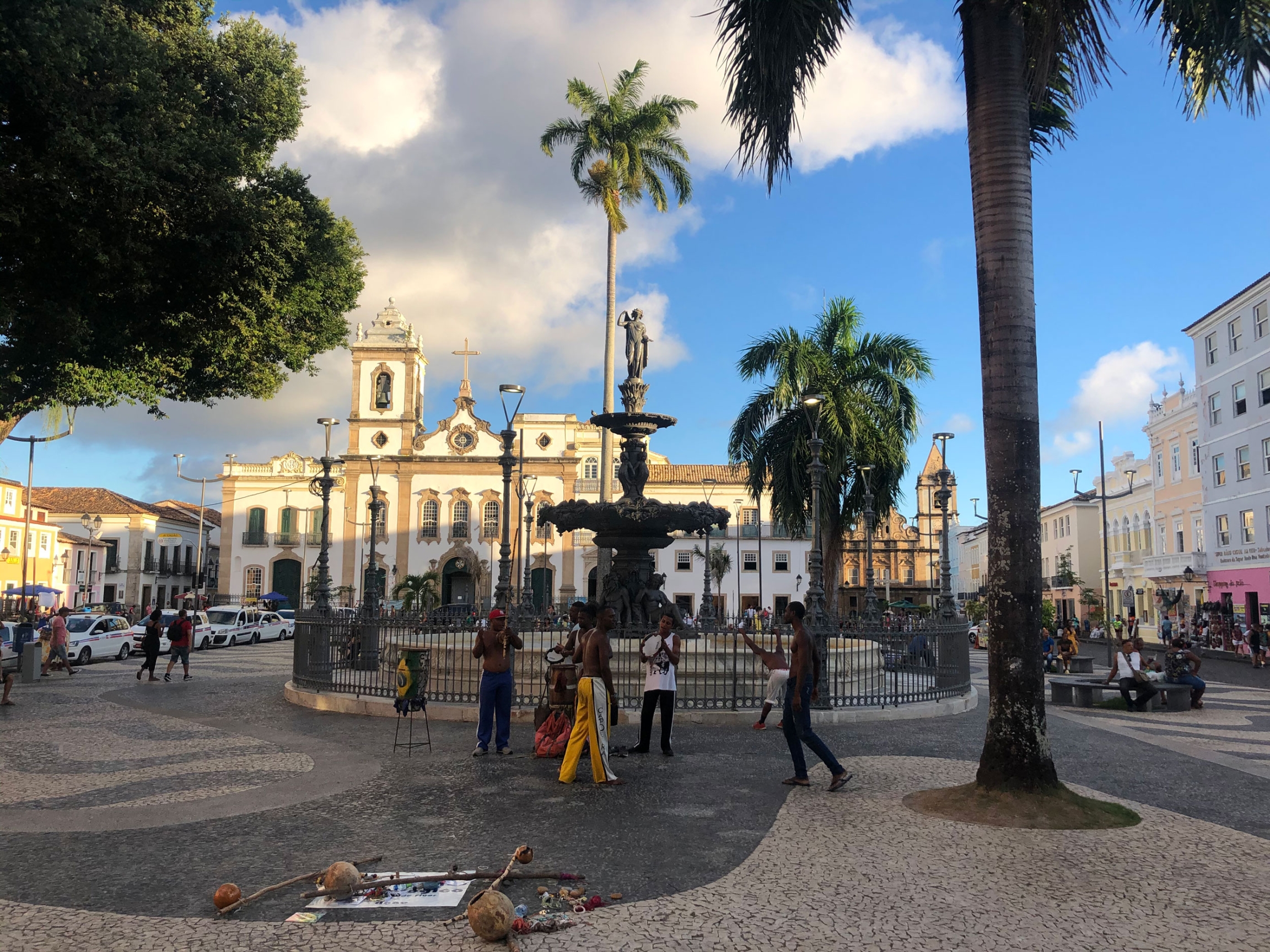 Pelourinho, the site of a slave market in Salvador, Brazil.

Marco Werman: I'm curious, today, what do the people of São Tomé know about the story of the traffic of enslaved people?Howard French: I was struck, in visiting there, that sites of memory linked to this history are extraordinarily few and poorly elaborated. Only in one specific spot did I really discover not a monument — but a human trace of the story that I'm telling. And it was on the sort of north side of the island where a famous shipwreck takes place early in the 1500s. Slaves being brought from Africa to São Tomé by the Portuguese and the ship crashes on some rocks just off the shore of São Tomé then. And some of the slaves make it to land, somehow. The white people disappear. There's no further record of them, and these slaves set up one of the first so-called maroon or runaway slave societies in the bush of that part of this heavily forested island. And they survived in that way, independent of the Portuguese colonizers, for a very long time and eventually even mount a rebellion in collusion with enslaved Africans on the other part of the island against Portuguese rule.So, despite the interconnectedness of Europe and Africa throughout history, the African side of the story has — unless you go looking for it — been erased, as you say, from the mainstream telling of that history. Why is that?Part of it is because, I think, Europeans are aware of the extraordinary horror that attaches to this enterprise, that 12.5 million people survived the Middle Passage and were delivered into slavery in the New World. And these people produce the wealth that separated, for the first time in history, Europe from other, older civilizations like in India, and in East Asia and China, in particular via the exploitation of bonded labor. Europe's wealth grew out of this exploitation. And the very viability of the American colonies, which became the United States, also grew out of this form of exploitation, and these are hard things to wrestle with. It's a human instinct — everyone would like to explain their own success by virtuous aspects of their personality or of their history. And it's difficult to allow for the proper accounting for things so terrible as this. And so I think there's this persistent denial. I also think that part of this is a kind of deliberate separation in the way this history is told between Africans and Africans in the Americas or what we call today, in the United States. African Americans. Artificial divides are maintained in the relating of this history that make it hard to understand how important actually Africa was, how central Africa was to all of this history.The title of your book gets at a central theme of this history — the mass othering of people based on the color of their skin. Whether it's the Portuguese royals of the early 1400s, who first used the African to objectify the people on the continent, or the notion that you bring up of "savage-to-slave," it's the kind of foundational mindset of the enslavement of humans. How has that framing persisted over time and across oceans? Well, the interesting thing you see when you begin to explore this history in depth is that in the 15th and 16th century, quite remarkably, the Portuguese and some of the early other early Europeans who are making commercial exploration of the world of sub-Saharan Africa actually are not predominantly othering Africans to the extent one would imagine today. Africans had diplomatic political relations with the European kingdoms. They had representatives in the Vatican and they had embassies going back and forth between Africa and Western Europe. All of this stuff has been written out of history.​ Africans from Congo sustained an alliance with Holland to fight what really looks like a world war in the South Atlantic against Spain and Portugal. This alliance was proposed by the Congolese side.

These are just extraordinary stories that sort of make the othering you've described impossible to sustain, I would argue.The reason we have arrived at this state of othering is, again, I think, related to the horror that attaches to the entire enterprise of slavery. When one sees the process of converting human beings in such large numbers into beasts of burden and deriving one's wealth and economic success, and by this I mean Western Europe, but also the American colonies, which depend almost entirely on their economic relations with the Caribbean, meaning, with slave societies, one is confronted with two choices: One, recognize the horror or two, find other explanations to kind of mitigate the implications of this for one's own self-image. Howard, you quote Bob Marley's anthemic "Redemption Song," in your book. Remind us what Marley says and why it spoke to you so obviously for this history.Marley is saying in this particular song and in a number of his songs, something that I find of potentially revelationary importance — which is, don't take the history which is delivered to you in prepackaged, predigested ways for granted. Remember your roots. Try to go to the beginnings of the history, try to understand things in fundamental ways. Don't allow people to convince you, if you are of African ancestry, that you are worthless, which is what so much of our history for so long has tried to do. Marley, with his own creative genius, keeps coming back to this in his music. And so this is what his call to avoid becoming a victim of mental slavery is all about.