The Tió de Nadal, a smiling Christmas log, brings gifts to children in Barcelona in a tradition that dates back centuries. He is fed treats by the children and, in return, "poops" out holiday presents on Christmas Day.

During the month of December, the Tió de Nadal is placed under a blanket and fed every night. On Christmas Eve, he "poops" out presents.

It’s called the Fira de Santa Llúcia, and it’s been taking place in the plaza in front of the Barcelona Cathedral almost every year since 1786.

Performers play traditional Catalan music, various cultural events are planned, and — up the steps towards the cathedral — a giant log with a smiling face drawn on one side wears a traditional red cap called a barretina, keeping warm under an even bigger blanket.

His name is Tió de Nadal — roughly translated as the "Christmas Log" — and he’s the face of Christmas in Spain’s northeast region of Catalonia where Santa Claus takes a back seat.

As the tradition goes, the Tió de Nadal, colloquially referred to as Caga Tió, magically shows up at people’s houses in early December — or is sometimes just found in his natural forest habitat. Every child who partakes in the custom has his or her very own Tió de Nadal in the house, who comes in various sizes.

For the entire month of December, the children carefully take care of the log; he has his own spot where he’s cozied up underneath a blanket and is fed every night — anything from chocolate to mandarins. The idea is to fill him up for Christmas Eve, when the children gather around to sing a song, hit the Tió de Nadal with a stick and wait for him to “poop” out presents, which are revealed when the blanket is pulled up.

“I don’t know any Catalan families that don’t have a Tió de Nadal in their home,” said Gemma Fontané, founder of an online store that sells Tió de Nadal figures.

She said that the tradition dates back to the 17th century. Though the actual origins are unclear, it could be related to the ancient tradition of burning a Yule log for the winter solstice. Tiós de Nadal have traditionally pooped out turróns, a type of nougat popular in Spain during the holidays. But these days, he leaves behind all kinds of presents. And some kids also get presents from Santa Claus on Christmas Day and even from the Three Wise Men on Epiphany.

There are many variations of the song children sing while they beat the Tió de Nadal to get him to poop presents, but the most typical verse says: 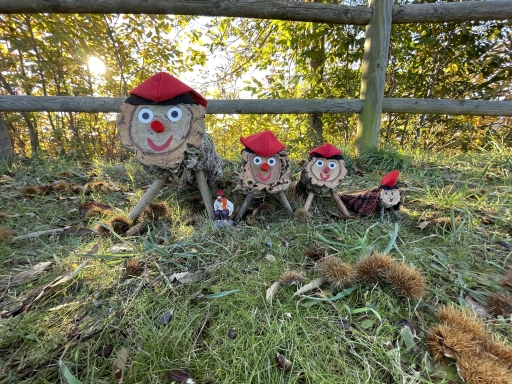 Every child has their own Tió de Nadal at home – and they can come in various sizes. These are some of the ones Gemma Fontané, founder of tiodenadal.online, sells.

“When you explain it, it can sound … funny,” Fontané said. “But it’s like when you are a kid, you think that this is normal, and when it begins Christmas [sic] it’s the first thing that we do.”

The Tió de Nadal isn’t the only scatological aspect of Catalan Christmases.

At the Barcelona Christmas market, there’s a stall with a peculiar figurine on top: He’s crouching, has his pants pulled down and he is — yes — pooping. It’s called a caganer, which means “the pooping person,” and it’s placed in nativity scenes. The ones sold at this stall are designed and handmade by vendor Marc Alós himself. 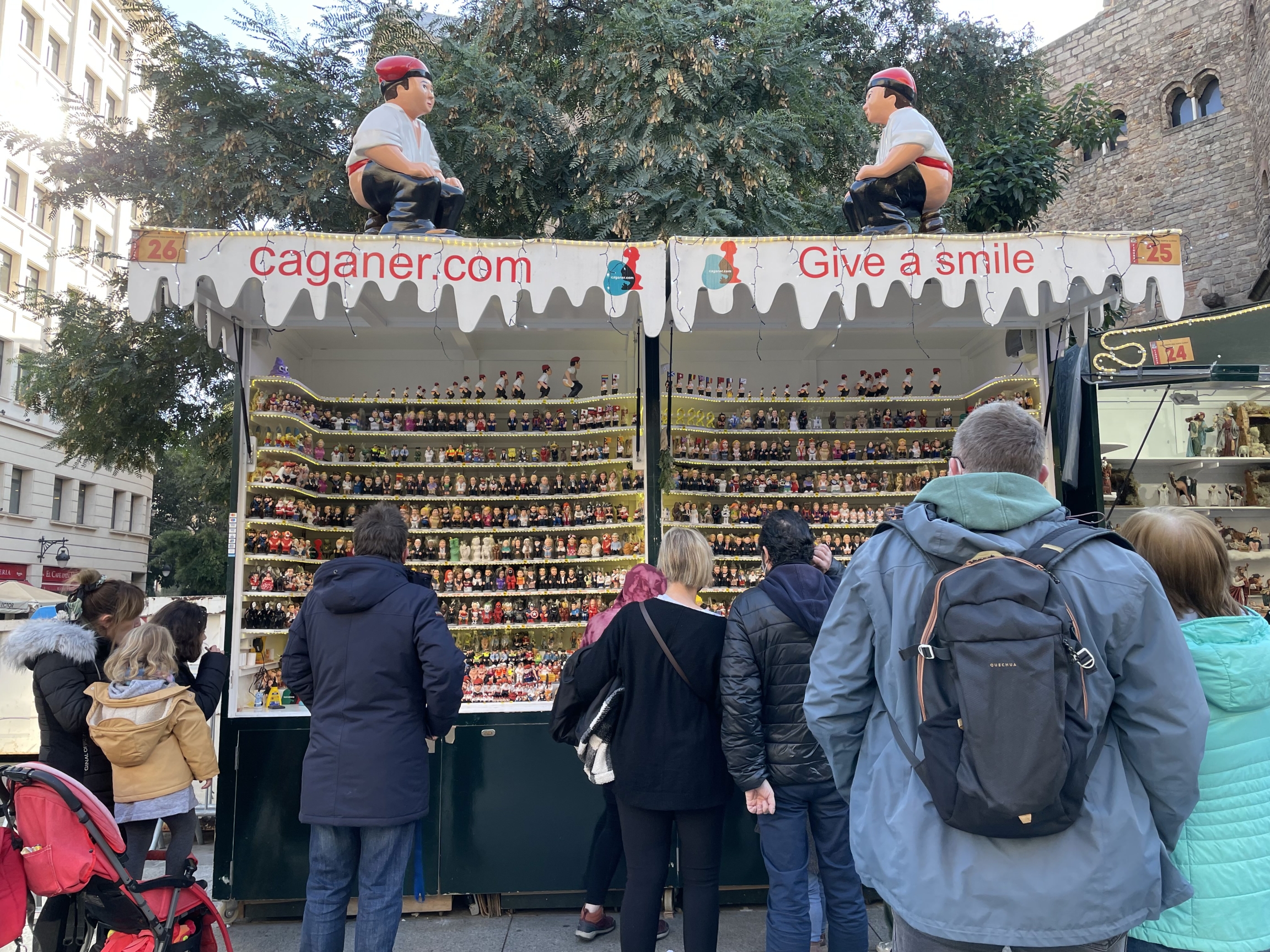 At Barcelona's oldest Christmas market, Fira de Santa Llúcia, Marc Alós sells handmade Caganers. His company, founded by his mother in 1992, now has more than 500 versions of the Caganer.

“Caganers are traditionally depicted as peasants, with a white blouse, pants and the barretina,” Alós said.

When his mother founded the company in 1992, that’s the only kind of caganer they sold. But in the last couple of decades since Alós and his brother took over, vendors have begun creating celebrity spinoff versions of the figurine. Alós has more than 500 characters — from Joe Biden to Madonna to Darth Vader — all crouching down and pooping. 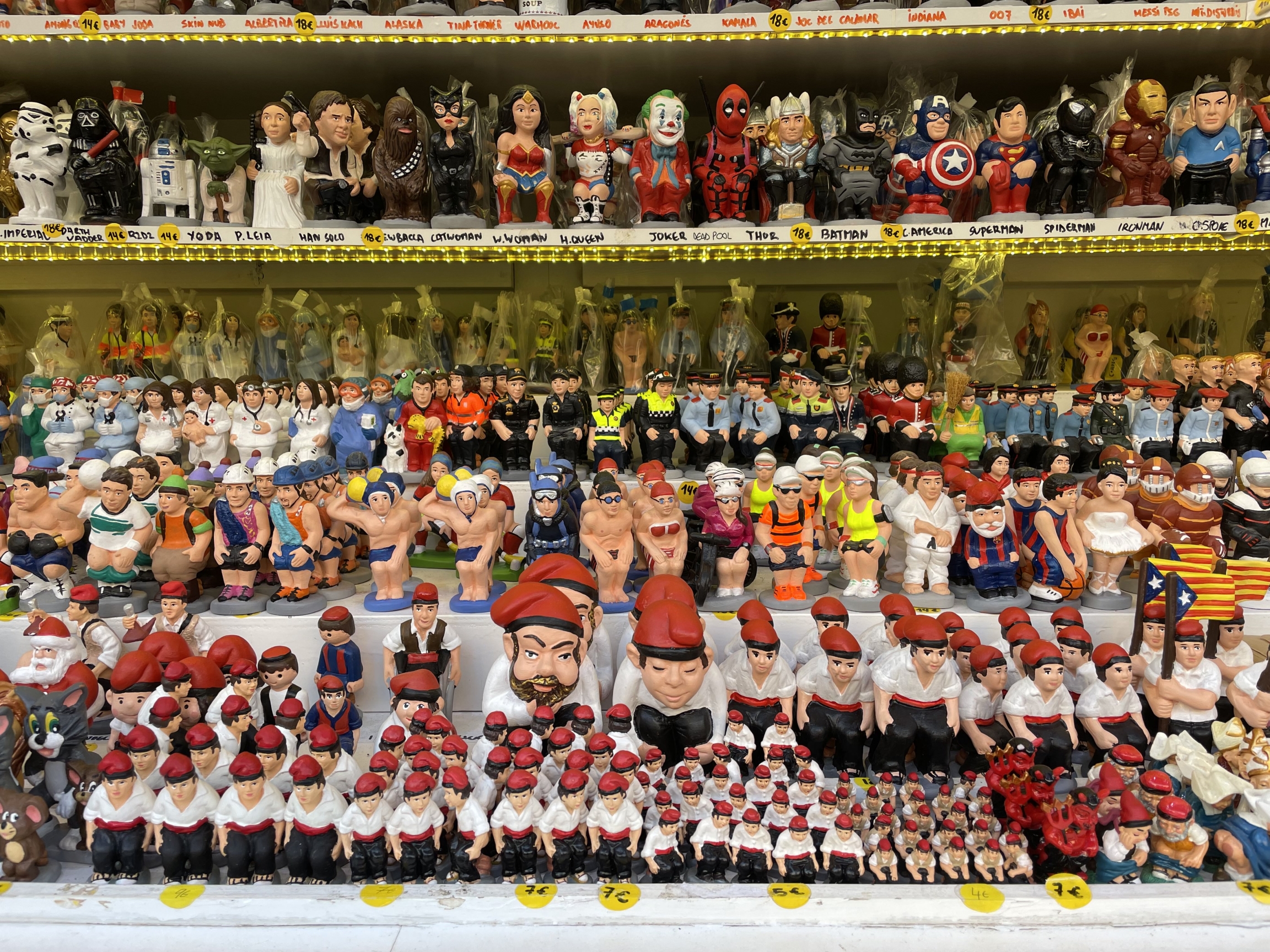 A Caganer, which means "pooping person," is placed on nativity scenes in Catalonia. While they're originally depicted as peasants, vendors now sell all kinds of characters.

He said that the roots of the caganer likely began in the 18th century as a symbol of fertilization and good fortune. Children would play a game where they would hide the caganer in various nooks and crannies of the nativity scene, spreading fertilizer throughout the scenery.

“It’s a very realistic character. After all, it’s something we all do every day,” Alós said, laughing. “I think a lot of people can see themselves in him.”

And the scatological connection to the pooping Christmas log, he added, is purely coincidental.