The speaker of parliament of the Maldives, Mohamed Nasheed, spoke to The World's environment editor Carolyn Beeler in Glasgow, Scotland, about what's at stake.

Maldivian President Mohamed Nasheed signs a document underwater calling on all countries to cut down their carbon dioxide emissions in Girifushi, about 20 minutes by speedboat from the capital Male, Maldives, Oct. 17, 2009.

Nearly 200 countries at the UN climate summit in Glasgow, Scotland — COP26 — helped compose a draft summit agreement on Wednesday, including language around the goal of limiting global warming to 1.5 degrees Celsius.

It's a number that is critical to island nations like the Maldives.

The speaker of parliament of the island nation, Mohamed Nasheed, has been an outspoken advocate for action on climate change since he was the country's president.

Related: Is climate change causing us to experience 'ecological grief'?

He even held an underwater Cabinet meeting in full scuba gear back in 2009 — 20 feet below the surface of a lagoon off Girifushi — to draw attention to rising sea levels that could engulf his entire country within a century. He said that the reef is now dead and the fish are gone.

Back in 2015, he and a group of the most climate-vulnerable island nations succeeded in getting the target of limiting 1.5 degrees Celsius written into the Paris Agreement.

Related: Why 2020 is a key year for climate action

Now, in Glasgow, he and other leaders are trying to keep the world on target.

Not achieving that goal "means we're dead. Just simply dead. A whole country gone. A whole people gone. A whole society gone. A whole community gone. You know, 2,000 years of culture gone. And this is the case with many, many low-lying islands," he told The World's environment editor, Carolyn Beeler.

But Nasheed does have some hope for the future and is "far more optimistic than, let's say, I was four years ago. I think it is moving in that direction" in terms of the progress being made at this year's conference.

To hear the full interview, click on the audio player above. 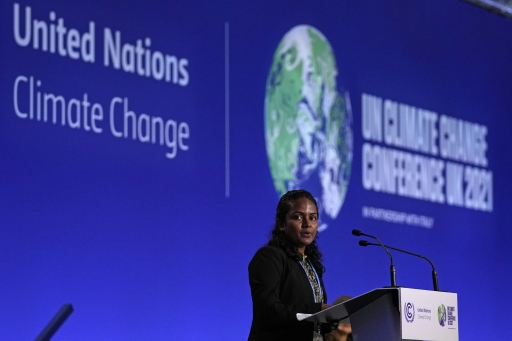 (This interview was produced as part of the global media collaboration Covering Climate Now.)