Marine animals are used to destroy ships and saboteurs

The US Navy Marine Information Center has recently trained dolphins in San Diego Bay. According to the US military, they are using trained dolphins and sea lions to defuse mines, search for disaster victims and locate enemy combat swimmers. A military expert told the MK correspondent about the real potential of using sea animals to perform combat missions. 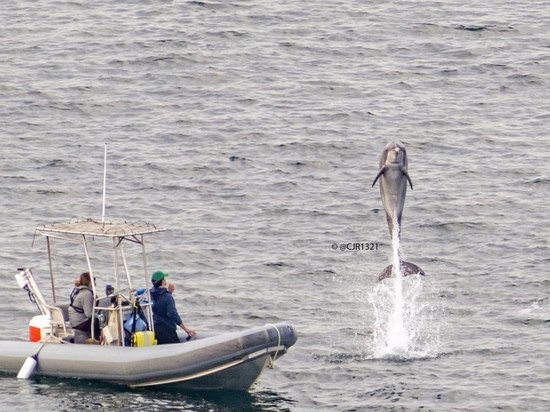 According to open sources, dozens of dolphins and other marine animals are serving in the US Navy. There are special centers for their training, as well as for practicing the interaction of naval sailors with waterfowl “primates”. How effective is the use of dolphins for clearing mines, if divers can handle the same job – “MK” asked the captain of the 1st rank in the reserve Vasily Dandykin.

– First of all, the military uses dolphins as demolition, as these animals can quickly and almost imperceptibly mine enemy ships, attaching explosive devices to their bottom, – said the expert. “Another use for them is the destruction of saboteurs when they are trying to infiltrate a protected military facility. At closed naval bases, for example, in Sevastopol, there are special underwater obstacles. If someone tries to penetrate through them, the dolphins detect the saboteur and with the help of a weapon attached to them, similar to a bayonet-knife or a dagger, hit the enemy swimmer.

Our facility also used to keep trained dolphins who were trained for combat missions. The diver still has to work harder than the dolphin. No matter how a diver or a saboteur is trained, these are still people, it is very difficult for a person to move in the water.

Dolphins can also neutralize mines, since this is a very trainable animal, one might say – with high intelligence, which is able to dive on great depth. But this is not their primary task. Using dolphins only to clear mines is too ineffective. The search and destruction of explosive devices can be performed at a quite decent level by unmanned vehicles equipped with artificial intelligence. They allow the military to do without these wonderful animals.

-Yes, even in ancient times. Think, for example, of the war elephants of the time of Alexander the Great.

During World War II, many trained animals, including dolphins, were used in different armies. In the Red Army, for example, miner dogs with explosive devices blew up enemy tanks and thus saved thousands or even tens of thousands of Soviet soldiers. Of course, now animal activists consider this to be savagery, but then there was simply no other way out. Especially if you remember the huge human sacrifices that our country suffered – 27 million people died. In honor of the fighting animals, by the way, dozens of monuments have been erected. And about dolphins, I know, sailors even composed songs.

When the Soviet Union collapsed, Russia handed over the remaining dolphinarium in Sevastopol to Ukraine and the practice of using dolphins to perform combat missions quickly disappeared. Many dolphins were sold to private dolphinariums, others died due to insufficient care.

– The problem was the lack of sufficient funding. Most of the ships that Ukraine got after the collapse of the Soviet Union were handed over for metal or sold.

Dolphins are not ships, but living beings. They need to be constantly fed, monitored, and treated if they get sick with something. The situation in the 90s, you know, was very difficult – almost no one had extra money.

– Undoubtedly, and not only dolphins. Other mammals, for example, sea lions (a species of northern seals. – “MK”), are also attracted to the performance of combat missions. These are not metal objects that can be easily detected. I think they can still be “tracked”, but the use of such advanced animals as dolphins can pose a serious threat to our ships.

True, for this, the ships and vessels of the US Navy will need to come close to the Russian borders. Dolphins can be used by the United States to protect their military bases, which are located around the world, but it is difficult for me to imagine that these animals would be used in the open ocean.

– Yes, at least in Russia. But in Norfolk or Japan, the American military may well train dolphins to find and destroy Russian ships in the open ocean. They have the means for this, so I do not exclude such a possibility.

– I think this applies not only to the Navy, but also to the Russian Guard, whose powers include the protection of the Russian coastal territory and water areas, for example, the Crimean bridge, as well as the naval forces of the FSB border service. The Russian Armed Forces are ready to give an adequate response to any challenge from our Western “partners”. The Navy can apply the Soviet experience and use modern technologies, and since dolphins are very well-trained animals, we will not have any problems. But at the moment there is no need for this – the level of development of hydroacoustics makes it possible to detect both saboteurs and small submarines that decide to covertly approach Russian naval bases.

– No, this cannot be called lagging behind them. … Even before the collapse of the Soviet Union, we walked with them on the same level. And now everything depends on the Americans themselves. If they choose to focus on destroying Russian ships with trained dolphins, the Russian Navy will quickly deploy the same tactics or develop countermeasures against this threat. It is about the same with hypersonic missiles, but on the contrary: we are ahead, and they are doing everything to catch up with us. So far, fortunately, they have not succeeded.